Fortunately, I’ve been thinking about this topic for about a week, so it shouldn’t be difficult to re-create it all. I’m saying that knowing that very few people on this baseball site care about me going into deep nerd mode about the Marvel Cinematic Universe. I’m saying that with the disclaimer that if MLB owners don’t even care about the game of baseball right now, then why should I focus my longest running baseball feature on baseball?

On Thursday, I focus on Marvel movies, because I love them and because I just spent all day Wednesday reading comics. This week I’m not focusing on a specific movie as much as a character trend that I’ve noticed.

Outside of baseball, Marvel comics, and my Saturday music posts, I spend a lot of time studying mental health issues. After watching the MCU for about the two dozenth time from start to finish, my conclusion was this:

There are many superheroes in the MCU. Some of them have powers and tremendous amounts of strength. Some of them are just humans. Tony Stark is one of the regular humans. He’s a genius, and is the MCU version of Elon Musk in wealth, which combined led to his Iron Man suit that makes him a legitimate superhero.

However, in the words of Tony Stark: 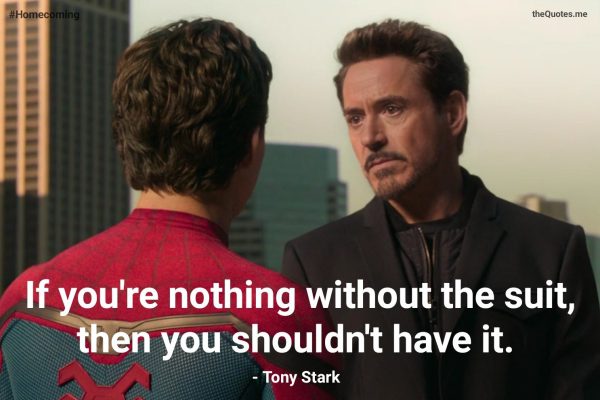 Fortunately, I’m not the only person who has had this thought. Upon a Google search, I found a tumblr post by winterda with a better breakdown than I could provide. The images below are from that breakdown, and I’ll add some thoughts.

I’ll add the disclaimer here that my current working theory on myself is that I probably should have been diagnosed with ADHD a long time ago due to some of the symptoms below. I never was because I was successful in school, and got great test scores, and in our society we don’t consider mental health issues if a person is successful in school and at work.

I’ll add the second disclaimer that I don’t believe ADHD is actually a thing, but just a simple abbreviation of a set of conditions that we as humans have yet to fully understand, due to our current lack of knowledge on how the human mind works.

With that out of the way, let me start with the ADHD symptom that leads to Tony Stark being Iron Man. 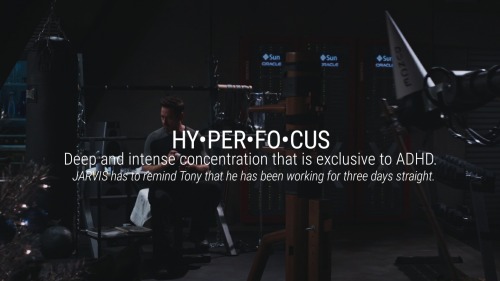 We saw this all throughout the MCU from Stark, and this trait literally started it all. Held captive in a cave, and threatened to build weapons for terrorists, Stark hyperfocused and created not only an arc reactor, but the first Iron Man suit for that reactor to power.

As the MCU went on, Stark remained hyperfocused on one thing, creating more and better Iron Man suits. He let Pepper Potts run the business, and let Captain America run The Avengers. His interests also expanded to creating clean energy, though that was a byproduct of the technology he was creating primarily for the Iron Man suit.

The ability to work endlessly on one thing, continuing to push your body beyond its limits, is a superpower I’ve used to complete every Prospect Guide I’ve ever written. It’s also a choice. I don’t think humans were meant to stay on a 9-5 schedule, with eight hours of sleep every single night at the same time. I feel like some people, especially those who don’t have 9-5 jobs, can break away from the sleep schedule when they’ve got something to hyperfocus on.

Of course, with hyperfocus comes… 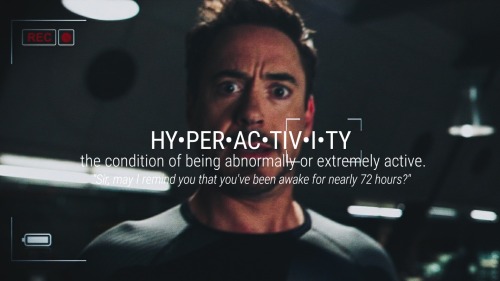 That’s the word when really rich people act out of their minds. His lack of sleep helped him push through many impossible feats for others. As an example, in the first Avengers movie, he stayed up all night reading everything about the situation at hand, and the next morning was an expert in thermonuclear astrophysics.

The same learning trend happened in Avengers: Endgame when he stayed up all night and learned how to time travel.

Part of what makes Tony Stark such a great character is his hyperactivity, but also the good that comes from his hyperfocus. That’s not to say the hyperactivity is always good… 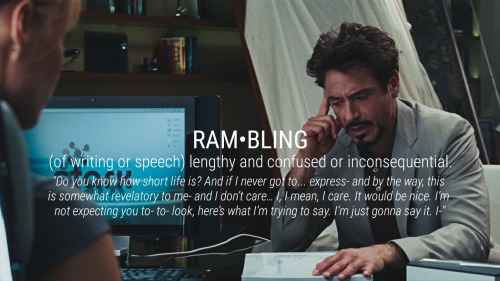 Most of the time, the successful things from Stark come in a controlled environment. When he’s working in his lab for 72 hours, he can do great things. When he’s out in the real world, in the middle of that hyperactivity, he can’t effectively communicate. He rambles, dances around what he wants to say, and ultimately is dialed into his inner monologue, with no filter for the outside world to his thoughts.

This also leads to… 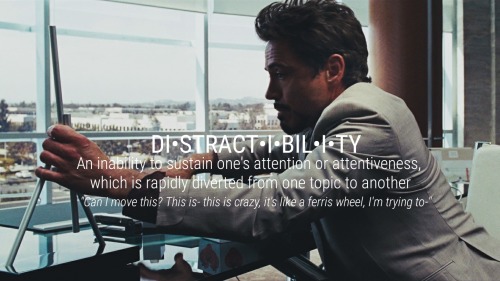 Both of those images come from the same scene in Iron Man 2, where Tony is trying to explain to Pepper that he will die without coming up with a better solution to the current arc reactor that is keeping him alive. He can barely communicate, with every moving thing around the room distracting him.

I can say I’ve definitely felt this. I noticed at a party a few years ago that when I’m in a room, I can follow every single conversation around the room at the same time. I’m not trying. I just have a difficult time filtering out noise and focusing in on what I want to focus on. When I’m in my lab, I can hyperfocus on one thing. When I’m in public, I get distracted by all of the additional, unpredictable sensory inputs, and I’m not as in control.

Tony Stark has shown the same thing throughout the MCU, though he can drown out the noise sometimes… 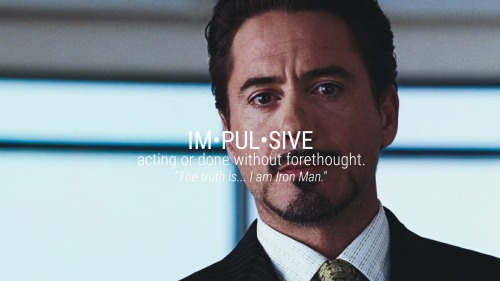 One of the biggest moments when Tony Stark was thrown off by rambling and distractibility was his “I am Iron Man” press conference. Trying to give a prepared statement, but also rambling off the top of his head the moment he got distracted, he finally drowned it all out, thought, and made a decision on the spot, telling the world that he was Iron Man.

I don’t think being impulsive is a bad thing, especially if you’ve spent so much time hyperfocusing on the many possibilities of a decision ahead of time. Unfortunately, not every impulsive decision works out, with many in the MCU being debatable. The biggest one came in Civil War, where Stark pushed The Avengers behind the superhero registration act in the Sokovia Accords, after very brief thought.

Tony Stark is Iron Man, along with one of the richest and most powerful people in his universe, so he doesn’t have much to fear from being impulsive. The downside comes from when he doesn’t consider others around him with his decision… 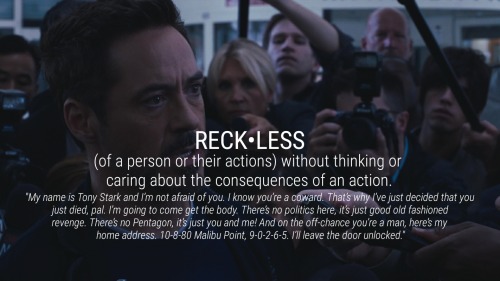 The image above comes from Iron Man 3, where Stark threatened the Mandarin by giving his home address. In the next scene, the Mandarin blew up Stark’s house, with Pepper Potts inside. Stark was able to save everyone, and barely escaped with his own life.

The same wasn’t true in Avengers: Infinity War, when he watched everyone around him, including his mentee Spider-Man, dust away. It was his impulsive decision to take the fight to Thanos, rather than trying to turn the ship around and return to Earth with The Avengers. That decision potentially led to the snap.

Then, in the next movie, everything was made right. Stark’s final impulsive decision was to grab the infinity stones from 2014 Thanos, and sacrifice his life to dust that army away. Everyone else had previously been returned to life, and Stark’s sacrifice made sure they stayed that way.

Unfortunately, that impulsive decision might have had future implications… 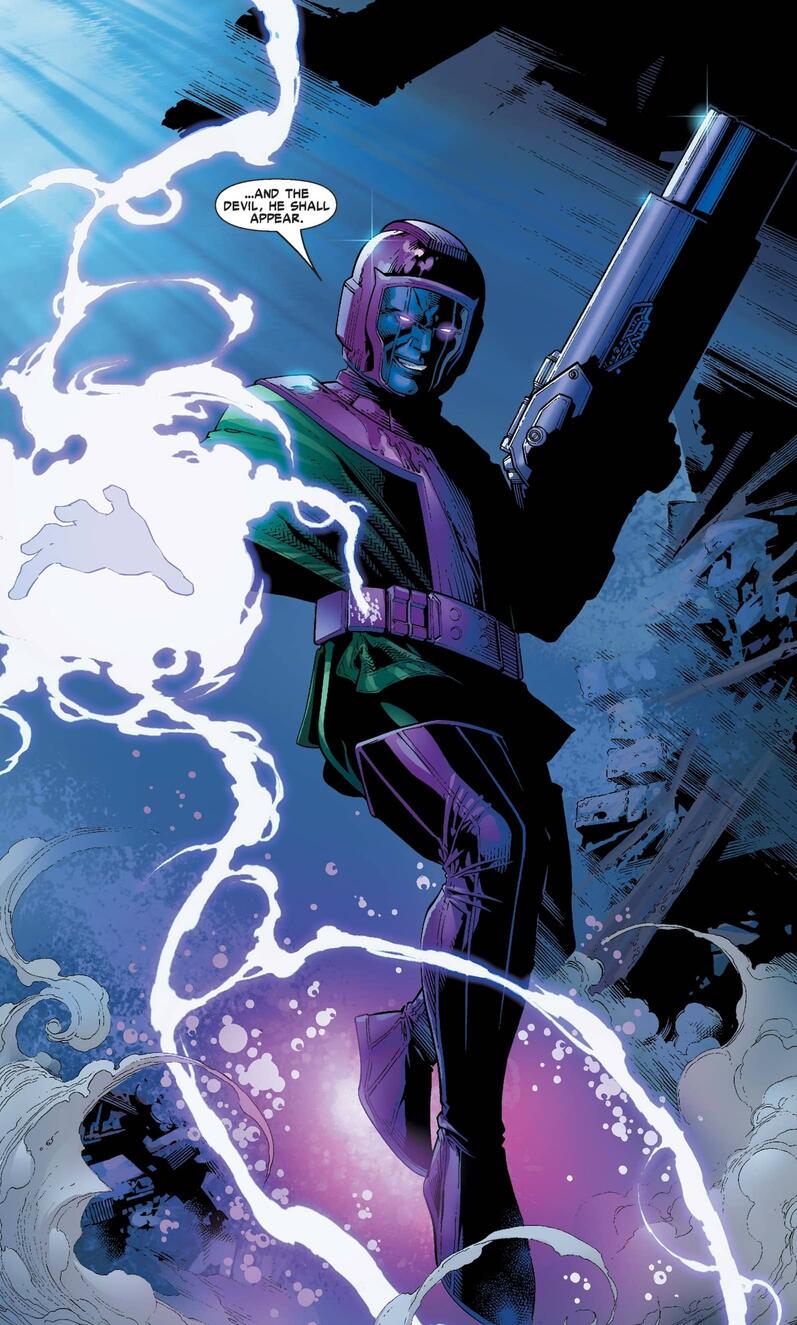 This Week on First Pitch

TUESDAY: This Week on Pirates Prospects