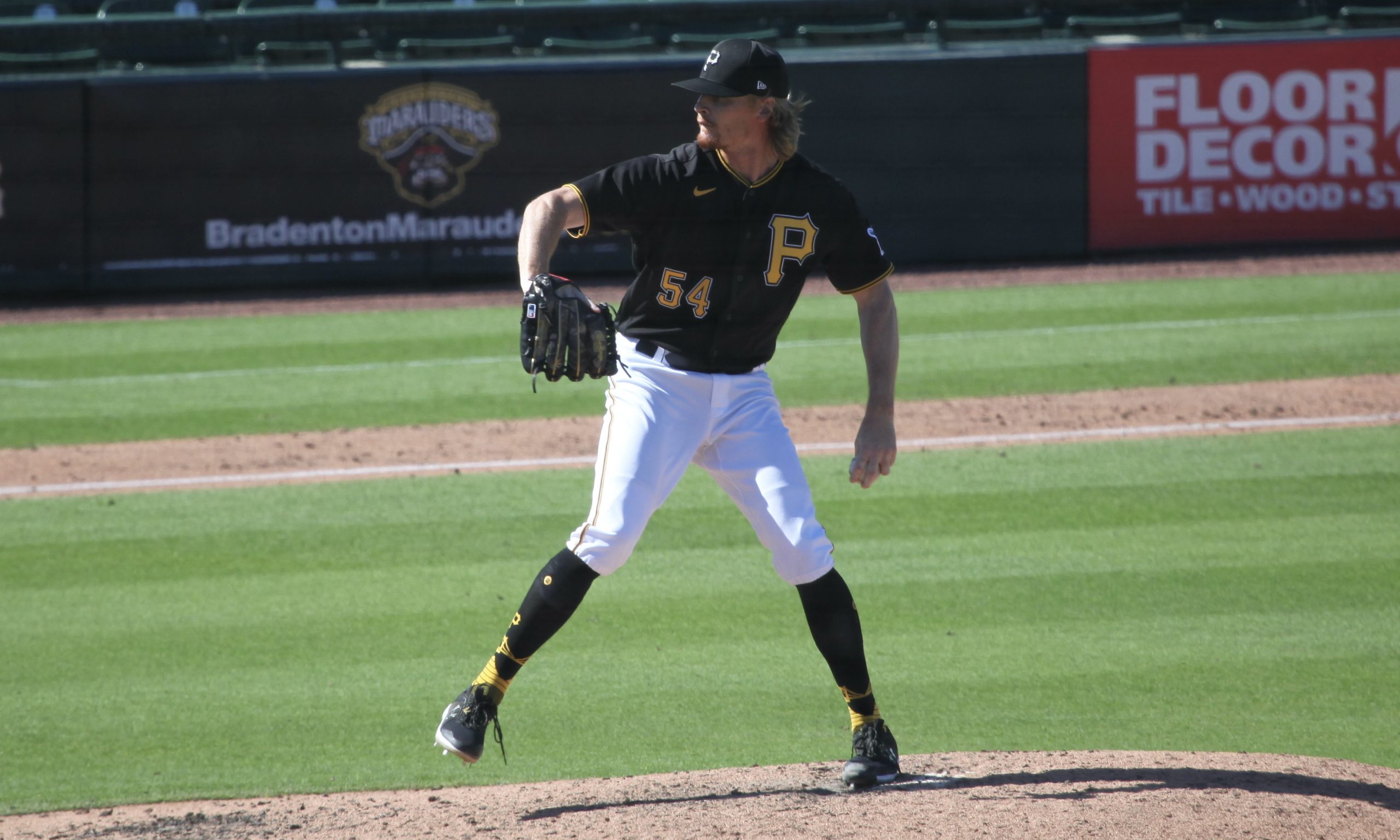 Let’s move on to the bullpen.  Again, this is a snapshot as things stand now.  The situation will probably change even more than with the rotation.  Not so much because the Pirates’ bullpen finished in the bottom five or so in pretty much everything — the rotation was even worse — but because even good bullpens need a lot of restructuring every year.  The Pirates’ bullpen needs a near-complete remaking.

I’m not including everybody.  Already covered Chad Kuhl and Cody Ponce.  Shelby Miller will be a free agent.  I haven’t put Luis Oviedo anywhere because he’s a lock to be optioned next year, now that he’s satisfied the Rule 5 requirements.  Hopefully he won’t get locked in the closet at Altoona or Indianapolis.

I’m including a couple guys who aren’t on the 40-man roster yet because they could conceivably be candidates for the major league bullpen early in 2022, if the Pirates don’t lose them before that.

Options are in parentheses.  A * means the player can’t be optioned without his consent due to service time.

Tanner Anderson (1):  Late-season fill-in.  I can’t imagine he’ll be on the roster for long.

Anthony Banda (0):  Banda had a good ERA, but his xFIP was 5.14.  Right-handed hitters destroyed him and there’s no flexibility given the lack of options.

David Bednar (2):  Bednar was good in the first half.  In the second half he gradually replaced his splitter — a good pitch in its own right — with a curve and was awesome.  Moar Bednar!

Blake Cederlind (2):  The Pirates supposedly are going to try Cederlind as a starter, but first he just needs to get back into games.  He should be in Pittsburgh at some point in 2022, in some role or other.

Enyel De Los Santos (0):  For some reason, after being bad with the Phillies, De Los Santos came to the Pirates and was bad.  Could the two developments be related?  Having no options means the Pirates can’t send him to AAA to see whether he’s bad there, too.

Sam Howard (2):  Howard had the kind of season that looks bad on the stat sheet but makes you want to keep trying.  He already had a good slider and, at the start of the season, began throwing his fastball up.  The result was a ton of swing-and-miss.  But he went on the IL twice after disastrous outings; those two outings accounted for over two full runs of his 5.60 ERA.  He does have two real issues:  walks and right-handed hitters.  But he’s got way more upside than, say, Chasen Shreve.

Kyle Keller (0):  Keller became one of those guys, like Ka’ai Tom, Erik Gonzalez and Michael Perez, who left you wondering what the attraction was.  The worse Keller got, the more Derek Shelton kept coming back to him.  Yes, he fans tons of AAA hitters, but in the majors he allowed nearly six walks and three dingerz every nine innings.  Wtf?

Nick Mears (1):  Mears didn’t have good numbers in AAA or the majors this year, but the Pirates seemed determined to get him into a lot of games late in the season.  His basic problem is control, which isn’t surprising.  His college experience was mainly just in summer ball and as a pro he’s still short of 100 career innings.  So I can see if the Pirates want to keep taking looks, because he has stretches where he’s hard to hit.

Chasen Shreve (*):  Shreve had a nice ERA with the Pirates, but his walk and K rates were poor.  His xFIP was 5.15 and he was slightly below replacement level.  Howard and maybe even Banda would make more sense.

Jose Soriano (3):  The way I understand the rules, Soriano only has to stay in the majors next year for 90 days to satisfy the Rule 5 requirements.  I have no idea what the recovery time is for corrective Tommy John, so he could miss a little, most or all of the season, I suppose.  The Pirates have stuck with him this long, not that there was much of a decision to make once he was on the 60-day IL.  That obviously changes in the off-season.  If he can get healthy, he has serious upside.

Shea Spitzbarth (2):  Spitzbarth’s AAA numbers look a lot like Shreve’s MLB numbers.  Nice ERA, poor walk and K rates and a 4.99 xFIP.  I think the Pirates just saw him as a late-season fill-in.

Chris Stratton (0):  This guy should be known as The Stabilizer.  He doesn’t dominate, but he steps into whatever bullpen role the Pirates need filled and does solid work.  He frequently gets mentioned as a trade chip.  My gut reaction is that he has more value to the Pirates than he would in trade, but that may not be correct.  Every year, a handful of contenders spend July trying to rebuild firebombed bullpens.  A smart GM might see Stratton as a nice partial hedge against that.

Duane Underwood, Jr. (0):  Underwood was pretty much “meh” across the board in 2021, although his numbers got hammered in one terrible month (July).  The Pirates like him because they see him as a multi-inning guy.  No options, no flexibility.

Yerry De Los Santos (3):  De Los Santos pretty much missed three whole seasons early in his career, then missed most of 2021.  He was really good, though, in both AA and AAA in the very brief time he got.  He’s not on the roster and Rule 5 isn’t even an issue:  he’ll be a minor league free agent if he isn’t added.  I’d rather take a chance on a guy with some non-zero chance of being a one-inning, shutdown guy than drift on with guys like Shreve and Underwood.

Hunter Stratton (3):  Stratton looked like a run-of-the-mill organizational reliever until he put up a 15.6 K/9 in the first half of 2021 at Altoona.  He pitched pretty well at Indianapolis in the second half, although his control was shaky at both stops.  He’s eligible for Rule 5.  Stratton and De Los Santos both should be 2022 options a little ways into the season, or maybe even to start the season, if they’re still around.

It’s hard to blame the front office for trying to build a bullpen on the cheap, because that’s the sensible thing to do if you’re not the Dodgers.  The parade of Waiver Wonders, though, got old.  Excluding Yerry De Los Santos and Hunter Stratton, nearly everybody here arrived through some sort of bargain basement pickup.  But almost none of the bargain types had any success, especially if you don’t get carried away with reliever ERAs.  Of the exceptions, Bednar came in a big trade and Ben Cherington inherited Chris Stratton from Neal Huntington.  Even Howard, who looked good for a month or so, arrived when Huntington was on his way out the door.  I’d way rather see the Pirates try to groom their own guys than keep dragging in so much waiver flotsam.