First Pitch: A Storm is Coming, With a Sea of Black and Thunderous Roars

I can hear the echoes of past and future thunderous roars.

The sea of black that once rumbled in this park now reverberates throughout the years to remind of the power that can be generated when this city has a winning baseball team to follow.

And if you listen closely, you can hear the now silent sea start to shake as stones start to skip across the surface.

I believe the Pittsburgh Pirates are going to contend by 2023.

Technically, we should all be demanding that they attempt to contend in 2022. The farm system has a lot of players who should arrive in 2022-23, and the Pirates have plenty in their budget to add to this MLB team.

However, putting together a winning baseball team isn’t easy. That’s why I’m not expecting a winner until 2023.

I am expecting a winner though.

We’ve all seen that before in Pittsburgh. The most notable example came in 2013, highlighted by the NL Wild Card game. That was the loudest sporting event I’ve ever been to, and it might rival some concerts I’ve seen. Pittsburgh showed up that night. Pittsburgh is going to show up for a winner.

The winning ways didn’t last the last time around. The Pirates made the playoffs in 2014 and 2015, losing in the Wild Card game both times to the best pitcher in the league at the time in each season.

We all know what happened after that. The condensed version is that the rest of the league started advancing their approach with developing hitters and pitchers, and the Pirates were left behind, managing only one 82-80 winning season from 2016 through the current season. Their former General Manager, Neal Huntington, was fired and Ben Cherington was brought on board.

My main focus in covering the Pirates right now is their Player Development system.

The Pirates didn’t have any issue finding talented players under Neal Huntington. In fact, the drafts we’re all currently raving about under Ben Cherington come largely from the scouting department that Huntington set up.

Unfortunately, the Pirates didn’t have a good development system in place. This led to players either falling well short of their projections in Pittsburgh, or in some cases, going elsewhere to realize their upside.

The Pirates had enough talent in their farm system at the end of 2015 that they should have done more in the next six years than an 82-80 highlight.

The way I see it, they are back to that pre-2016 stage in terms of talent inside the system. They might have even exceeded those 2016 levels.

The summary: Things are massively different. In a good way.

It’s not like there has been an overhaul in the personnel department. It’s more of a change in approach. I’ll be detailing a lot of that in the coming weeks, as I process through all of the information I’ve been gathering on this trip.

Only time will tell if the new approach from the Pirates works out. All that any of us can do is see what is happening and predict what it will mean.

But, “what is happening” in this case happens to be “a refreshed focus on the area where the Pirates became painfully stagnant”. When that’s the case, then you can start to predict when the Pirates might win again — rather than worrying about the if.

My season-ending trip through the system saw a brief stop at the MLB level, where I had a chance to talk with John Baker for a massive Player Development article I’m working on.

Honestly, it just felt good getting back to the spot where the thunder roars from a sea of black.

Even if this park is currently between storms.

I can hear the next one rumbling in the distance. 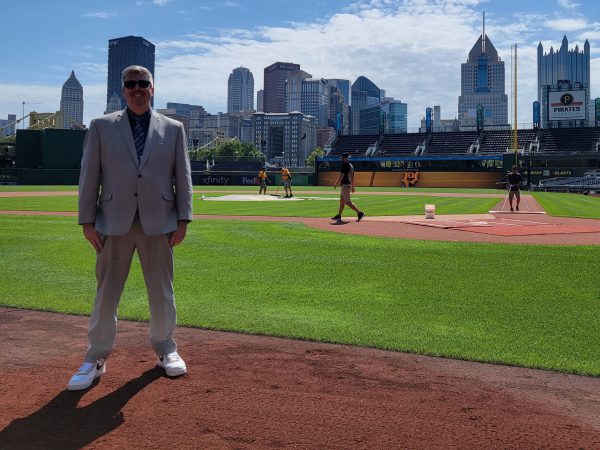 Today, I’m making like Rodolfo Castro and heading down to Double-A. I’ll have coverage on Roansy Contreras tonight.