Chad Kuhl’s return to the Pirates didn’t go especially well as he gave up three runs on six hits over four innings.  The Pirates’ offense didn’t have much to offer, as usual, and they lost to Kansas City, 7-3.

Adam Frazier started the game with his daily double.  In fact, that put him in a tie for the major league lead in doubles, pending the outcome of the late games.  He came around on a fly ball and a grounder. 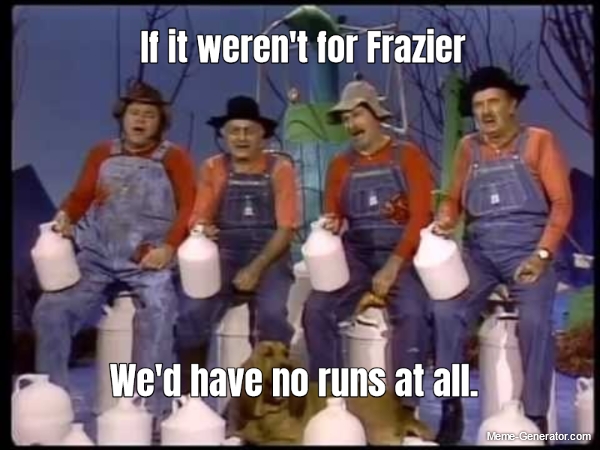 Kuhl got hit around in the first two innings.  A double and a wild pitch put the Royals’ first batter on third with nobody out.  Kuhl fanned the next two hitters, but Salvador Perez dribbled one up the middle that just trickled through.  In the second, Kuhl started off with a hit batsman, a double and a single, making it 3-1 Royals.

In his last two innings, Kuhl faced only six batters, although a line-drive double play helped.  He also didn’t walk anybody and fanned five, so the silver lining that Pirate fans are condemned to search for was there.

The Pirates got one run back in the third when Kevin Newman doubled and Jacob Stallings looped a two-out single to center.

With the Bucs just a run down, Duane Underwood, Jr., replaced Kuhl for the bottom of the fifth.  The advanced stats seem to think Underwood has been more or less passable this year, but he’s had a knack for being in the wrong place, or doing the wrong thing, at the wrong time.  In this game, he hung a curve to Adalberto Mondesi with a runner on base.  That put the Royals up, 5-2.

The Pirates’ offense made little noise the rest of the way.  After the third inning, they got only two runners past first.  Gregory Polanco had a two-out double in the sixth and Bryan Reynolds cut the gap to two runs with his seventh home run in the eighth.  The Pirates finished the game with six hits and went 1-for-6 with runners in scoring position, just another day for their offense.

Underwood threw two more innings after the Mondesi homer.  Luis Oviedo, who hadn’t pitched in nine days, gave up two runs in the bottom of the eighth.