The following article was a reader submission by Jason Gindele. You can find his previous articles here, here, and here.

Pirates fans undoubtedly threw their hands in the air after Joe Musgrove threw a no-hitter for the Padres on Friday. Visions of Gerrit Cole, Tyler Glasnow and Charlie Morton flashed through their heads, understandably assuming that Musgrove is the latest ex-Pirate to thrive outside of Pittsburgh.

As it turns out, the Pirates may have had a hand in Musgrove’s accomplishment.

Then things changed. He finished the pandemic-shortened 2020 season with a 3.86 ERA and a 3.19 xFIP and there was a new buzz around Musgrove. But the change didn’t just happen when Ben Cherington, Derek Shelton and the rest of the off-field personnel took over in the winter of 2019-20. It started near the end of the 2019 season, while under former pitching coach Ray Searage.

In this excellent Post-Gazette article, Jason Mackey wrote that Musgrove started keeping his throwing arm closer to his waist in late 2019, allowing him to stay on top of the ball, stick with a more consistent release point and add deception to hitters. In his last five starts of the 2019 season, Musgrove had a 2.89 ERA and 3.28 xFIP.

Here’s more insight from Musgrove, who recently spoke with David Laurila: “I feel like the change we saw last year was more me just having a really good feel for my delivery, and being able to repeat. I did change my arm-action at the end of 2019. That was [from] watching guys like [Shane] Bieber and [Trevor] Bauer and [Lucas] Giolito, who were a little more consistent with their stuff in the zone than I was. It seemed like they were in really good positions with every pitch, and I’ve always had a good ability to watch somebody move, and be able to repeat that movement myself. I started doing that and saw my numbers jump up, so I went into the offseason and really tried to get more efficient with the arm-path I was taking out of my glove. I think the spin rates and the action on the pitches is kind of something that just comes secondary from that.”

Those mechanical changes conveyed to the 2020 season, under new pitching coach Oscar Marin. But Musgrove also changed his approach, based on conversations with Marin and the analytics team in Pittsburgh. And it’s that mix of new mechanics and new approach that has spurred his early success in San Diego (though in a very small sample size). Here’s a breakdown of some of those modifications:

The mechanical adjustments in late 2019 allowed Musgrove to find a more consistent release point across his extensive 6-pitch repertoire. This can increase the “tunneling” effect that makes it more difficult for hitters to identify the pitch in a timely manner. Most notable is Musgrove’s more uniform extension point, which varied considerably early in his career, per this chart from Baseball Savant: 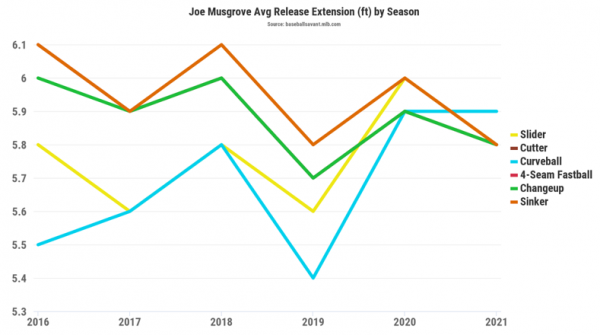 Musgrove’s mechanical tweaks led to altered spin rates — especially on some key breaking pitches — and those changes have continued in 2021. (It’s worth noting that increased spin rate can be both good and bad, depending on the pitch. Fastballs, for example, typically benefit from more spin, while a handful of breaking pitches can benefit from less spin.) Here’s a look at the spin rate progression for Musgrove:

As a result of the new spin rates and release points, several of Musgrove’s pitches are moving differently. That’s especially noticeable in his horizontal movement, which was already strong when the Pirates acquired him. Several of those pitches now boast top-level movement, per Statcast. Take particular note of the slider and curveball, which now have miniscule xwOBAs (expected weighted on-base average) of .141 and .159, respectively:

(By the way, it’s fascinating to see that his fastball and cutter are now both moving the other direction, albeit in small amounts.)

In 2020, the Pirates had Musgrove move away from his four-seam fastball — with -4.1 vertical movement — and more toward his curveball and slider. That change has been amplified in 2021, but the Padres also have Musgrove throwing more cutters than ever before. You can see the evolution of Musgrove’s pitch mix in this chart: 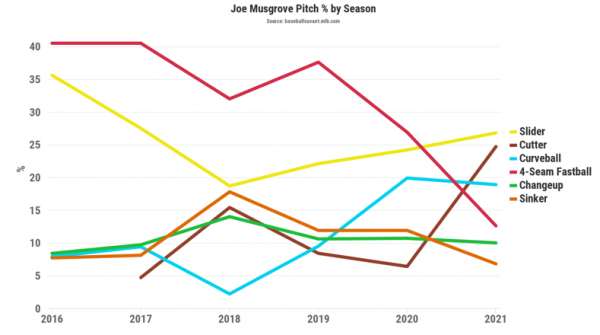 The last 35 pitches of his 112-pitch no-hitter on Friday consisted entirely of sliders, curveballs and cutters.

At the same time, the launch angle on batted balls has dropped precipitously this year. After marks of 11.7 and 12.4 degrees in 2019 and 2020, respectively, Musgrove has induced a launch angle of just 1.6 degrees in 2021. That’s a lot of ground balls.

The Pirates’ staff deserves some credit for that. It would be nice to see Musgrove plying his newfound craft at PNC Park, but the reality is that the Pirates aren’t built to be contenders now. Cherington was justified in taking the gains of 2020 and flipping the 28-year-old Musgrove at his then-peak value for prospects Hudson Head, Omar Cruz, David Bednar, Drake Fellows and Endy Rodriguez.

If it weren’t for the progress that Musgrove made in Pittsburgh, that kind of return might not have been possible. So while it’s tempting to lump Musgrove in with other ex-Pirate pitchers who have gone on to success, at least in this case, the Pirates benefited from his improvements.