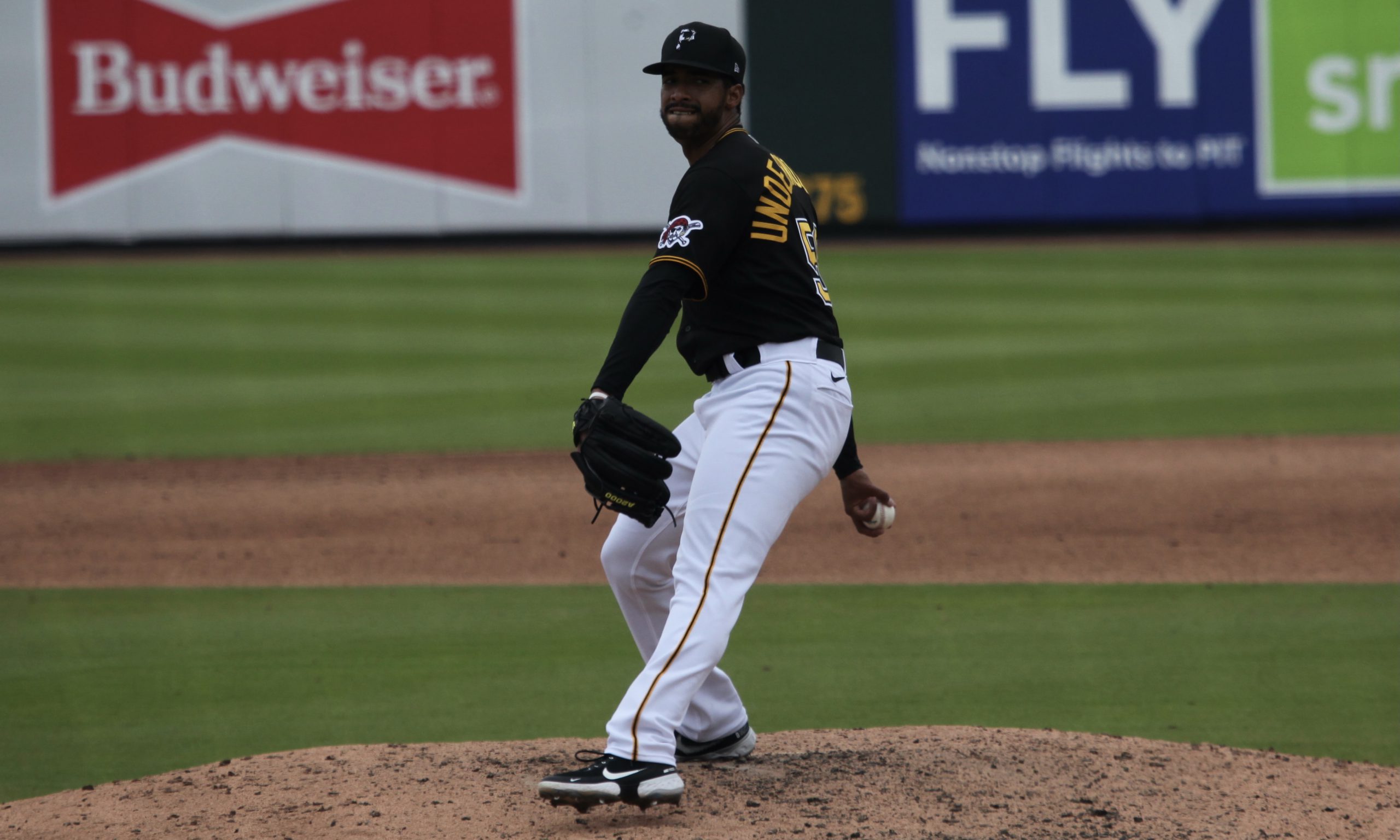 Opening Day is a week away! The Pirates made a few cuts this week, and it became apparent that Steven Brault will miss a few months of action. That has helped to shape the remaining roster battles, broken down below.

Neither of these guys have hit this spring, although neither is expected to be more than a cheap, defense-only backup catcher. I think we’ll see both in the majors by the end of the year. Wolters isn’t on the 40-man roster, and I think the Pirates will preserve depth and send him to Triple-A, giving the job to Perez.

The Rest of the Bench

There’s one bench spot remaining, assuming the Pirates carry 14 pitchers. Dustin Fowler seemingly has the edge here, as he is out of options and the only guy the Pirates could lose if he doesn’t make the majors.

I don’t see the need for Wilmer Difo when you have Kevin Newman and Erik Gonzalez on the roster, with Adam Frazier at second.

Phillip Evans hasn’t done anything to warrant going down to the minors, but might be an unfortunate victim of the numbers game. He’s the third option at best at the infield corners, behind Ke’Bryan Hayes, Todd Frazier, and Colin Moran. He also has options remaining, allowing the Pirates to send him down and keep Fowler.

The Pirates could choose between Fowler and Goodwin for the Opening Day roster. Or, they could send Goodwin down, give Fowler the first shot, and use these other three players as early season depth.

Wilbur Miller took a stab at the Opening Day pitching staff the other day. He suggested that the Pirates should send Mitch Keller to the alternate training facility in order to give Chase De Jong a look, though doubts they will do that.

I, too, doubt the Pirates will send Keller down. The projected rotation I see is Keller, Tyler Anderson, JT Brubaker, Chad Kuhl, and Wil Crowe holding down the final spot until Trevor Cahill is ready. The Pirates could opt to give Crowe’s spot to De Jong. Or, they could go with a few swingman options and stash a few of these guys in the bullpen.

The Pirates have the rotation to do something we haven’t seen in Pittsburgh previously.

Who in the above list would you trust a third time through the order? I can’t see a name right now for 2021 purposes. Maybe the veterans like Anderson and Cahill will do that to eat innings, though they’d probably be more effective with limited workloads. Steven Brault’s eventual return gives another guy who could eat innings, but would be much more effective in a limited role.

The point here is that there’s room for some long-relief guys in the bullpen at the start of the year.

The Rest of the Pitching Staff

Richard Rodriguez, Kyle Crick, Chris Stratton, and Michael Feliz seem to be holding down the later inning assignments. Duane Underwood Jr. is out of options, and I expect the Pirates to keep him as a reliever. He could eventually help as a long-man and perhaps provide rotation depth.

This is the area where I expect the Pirates to add some non-roster guys. The biggest candidates are De Jong and Clay Holmes. You could add Chasen Shreve to this list as a lefty, but I think the Pirates would be more likely to go with Sam Howard, who is on the 40-man roster.

There would be four spots remaining, and I expect one lefty to make the bullpen, so lets give a spot to Howard.

That leaves three spots. Trevor Cahill could start the year on the active roster, or the Pirates could put him on the IL to get him stretched out. This would buy some time, but isn’t a long-term solution. Eventually, he’ll take a spot.

Luis Oviedo is another guy who needs to be on the active roster as a Rule 5 guy, but could start on the IL due to a lack of work.

There are two spots remaining in this projection. De Jong and Holmes have been lights out, but so have David Bednar and Geoff Hartlieb, who are both on the 40-man roster.

The Pirates will need to create a roster spot to add Todd Frazier to the 40-man, which is currently full. Steven Brault seems like a good candidate for the 60-day IL, which would create the necessary spot. They would need to create additional spots for guys like Brian Goodwin, Chase De Jong, and/or Clay Holmes.

There are some candidates on the 40-man roster to be removed. Obviously Dustin Fowler is one who would go if he doesn’t make the active roster. I think that would only happen if Goodwin won the final bench spot.

Sean Poppen looks like the most likely candidate of the guys who have already been sent to the minors. Tyler Bashlor is another candidate if the Pirates want to give an early-season chance to De Jong or Holmes. He could also be a candidate for the 60-day IL, as he’s yet to pitch due to back tightness.