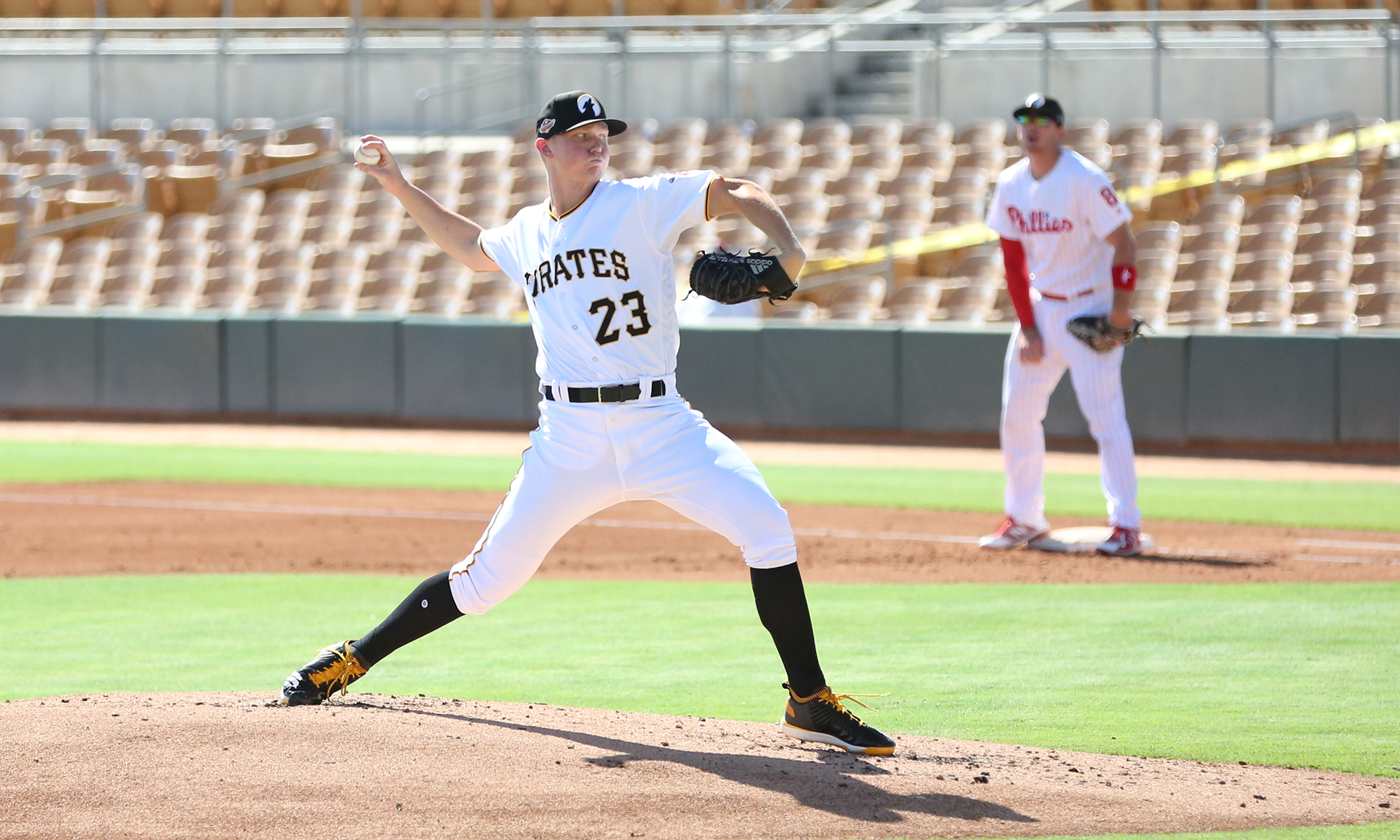 Barring injury, the Pirates’ rotation is probably already set in stone.  Or the front five are, anyway.  The “battle” may be over the possibility of going with a six-man rotation, at least part of the year.  Every team is in uncharted territory now, considering that nobody had a full, or even half, workload last year.  How much do you ramp back up?  Would a six-man rotation help ease the starters back in?  And, of course, the Pirates are a rebuilding team that has 7-8 starters they want to see, maybe more eventually.  Maybe several more, in fact, as we’ll see.  This could be pretty ugly at times, but at least there are a bunch of guys with legitimate interest attached.

Mitch Keller:  This is the guy who has to step forward, so a good spring would be nice.  He’s coming off two of the most analytically confounding seasons ever, performing way below his peripherals in 2019 and way above in 2020.  He also  managed the interesting feat of throwing 11 hitless innings in his last two starts while still leaving fans uneasy, thanks to ten walks.  One big question:  Will Keller be the opening day starter?  The Pirates want him to step into a leadership role, so . . . .

Chad Kuhl:  When you start breaking Kuhl down to figure out what’s next, it’s all over the lot.  He has very high-quality breaking stuff, but his fastball, despite good velocity, gets torched.  If you take out one disastrous start where Derek Shelton left him in to allow nine runs, he got good results in 2020, especially coming off Tommy John with no rehab time.  But he was helped by an unsustainably low BABIP.  And on and on.  But he has ability and he’s no longer saddled with a front office that’s just going to say, “Mooooaaarr sinnnnkkerzzz.”  Like practically all these guys, he cut his fastball usage sharply last year.  With only two months for the change to take root, the Pirates have a lot of guys who maybe should be viewed as in transition.

Steven Brault:  This is a new experience for Brault — going into camp as a rotation fixture.  Those last two, changeup-driven starts were tantalizing and, oh yeah, Jacob Stallings should catch every one of Brault’s games.  Plus, he gets to hit again this year, which is an edge for him.  And Eno Sarris likes him, which has to be good, right?  Brault is a guy to look forward to seeing this year.

J.T. Brubaker:  Brubaker has a lot of similarities to Kuhl.  He held his own after missing nearly all of 2019 and, even better, he did it in his major league debut.  He has two effective breaking balls and threw them a lot.  This year he has the advantage of (probably) going into camp as a heavy favorite for a rotation spot.  He and Kuhl are arguably the two leading test cases for what exactly the new FO can do with pitchers.

Tyler Anderson:  The Pirates signed Anderson because of the rule that requires a rebuilding team to have a veteran innings eater in the rotation.  That rule was added the year they added the rule prohibiting backup catchers from pinch-hitting.  Well . . . maybe not.  Anderson has gotten above 114 innings only once in the majors.  He’s usually pitched pretty well, except he can’t stay healthy.  It’s not the usual arm problems; instead, he’s been hampered by a stress fracture in his elbow and a recurring knee problem.  His spring battle is staying healthy.

Wil Crowe:  I can’t get excited about this one.  According to the reporting in DC, the Nationals weren’t high on him.  Crowe has only limited experience above AA and got pummeled both in AAA and the majors.  The upside is very limited.  Crowe has two options left, so he may be battling for sixth starter status.  Apart from the likelihood of injuries, there’s the chance the Pirates will go with a six-man rotation, so that’s a meaningful battle.

Cody Ponce:  In the Brewers’ system, Ponce was more successful as a reliever than as a starter, but the Pirates seem to prefer the latter.  As a starter, he’s a finesse guy, like Crowe.  The two of them plus Miguel Yajure likely will be the leading “next man up” candidates.  It’s very likely all three will see Pittsburgh at some point.

Miguel Yajure:  Yajure looked like a finesse righty until his velocity spiked after he had Tommy John surgery.  He also added a cutter to the standard four pitches.  All this added enough that FanGraphs rated him seventh in a fast-rising system after the Pirates got him in the Taillon trade.  His experience above class A is limited to 11 innings in AA and seven in the majors.  On the face of it, you’d think he’d be ticketed for AAA or even AA, but if he can pitch for the Yankees he can pitch for the rebuilding Pirates.  They need to start sorting through the possibilities quickly, because there are going to be other guys pushing from behind.  Yajure is a guy who could have a lot at stake this spring.

Roansy Contreras:  Contreras is on the 40-man roster, but he probably doesn’t have a high ceiling and hasn’t pitched above high A.  The Yankees didn’t bring him to their training site in 2020.  So he’s probably going to be slated for AA this year and may not get a lot of opportunities this spring.

Jose Soriano:  The Pirates made Soriano the top pick in the Rule 5 draft.  He’s coming off Tommy John surgery and could be ready fairly early in the season, but it’s an obvious opportunity for the Pirates to use the 60-day IL, which he’s on now, and the 60-day rehab for pitchers coming off TJ to carry him for much of the year without activating him.  If he remains with the Pirates, there’s a good chance he won’t satisfy the R5 requirements until 2022.  Soriano has the stuff to be a late-inning reliever, but I’d be surprised if the Pirates didn’t at least try him as a starter, which is why I’m listing him here.

Luis Oviedo:  The other Rule 5 guy, the Mets selected him and immediately traded him to the Pirates in a prearranged deal.  He’s highly regarded, but has an erratic history and hasn’t pitched above low A.  Ultimately, he should be a starter, but the Pirates are obviously going to have to hide him in the bullpen in 2021.  He probably needs to convince them this spring that he can do well enough to make that feasible.

Max Kranick:  The Pirates have brought Kranick along carefully, since he missed time with shoulder soreness a few years ago.  They took steps to keep his workload in check in both 2018 and 2019.  He’s always had solid results without quite breaking out, but he impressed people at the Altoona site in 2020 and hence was added to the roster.  His velocity has picked up in the last year or two.  Kranick has yet to reach AA, so he’s not likely to see time with the Pirates this year.

Cody Bolton:  Bolton had a big first half in high A in 2019, then scuffled some at Altoona in the second half.  This spring could be a chance for Bolton to make a case for a move up to AAA to start the season.  He’s not on the 40-man roster yet, which could work against him on the question of a September callup.

Quinn Priester:  Priester’s drawn a lot of hype this off-season, especially for a guy who’s pitched only once above rookie ball.  He made such an impression in fall instructionals that the Pirates may want to take some time in March to see just how far he’s progressed, as they decide where to assign him this year.

James Marvel:  After getting banged around with the Pirates in 2019 and then outrighted to AAA, Marvel may have missed a chance to return to the Pirates in 2020 when he suffered a forearm strain at the training site.  He’s probably a depth guy at this point and needs some breaks to return.

Chase De Jong:  A minor league free agent, De Jong is a finesse righty who hit a wall at AAA and the majors.  After a stint in independent ball, he came back throwing a lot more breaking balls and missing a lot more bats.  De Jong has mostly been a starter and I thought he’d probably serve as AAA rotation depth, but the Pirates could try him as a reliever.