Analysts in the Pirates Front Office

The following article was a reader submission by Jason Gindele.

In December, Baseball Prospectus published its findings (subscription required) on the correlation between winning and the number of analysts employed by a club’s front office. Spoiler: There is a correlation.

According to the researchers, each additional full-time sabermetrician on staff equates to an extra 1-2 wins per season. This chart from Baseball Prospectus — which shows wins from 2016-2020 based on how many analysts were on staff in 2016 — illustrates that correlation: 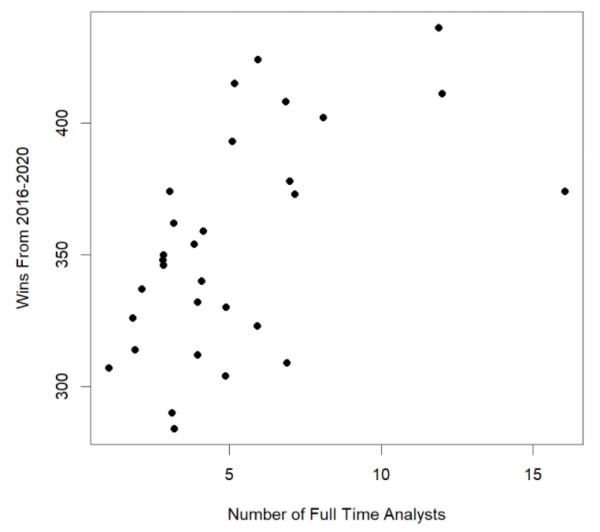 Baseball Prospectus kept the exact number of analysts at each club under wraps, but made it clear that teams like the Rays, Dodgers and Yankees had more analysts than most — often doubling or tripling those of other organizations. And over 5 years, each additional analyst was worth 5-12 total wins.

To be clear, correlation is not causation, but the data was found to be statistically significant. The Pirates can’t hire 100 analysts and suddenly vault to the top of the standings. There is more that goes into it. The analysts have to be good at what they do. As former Astros’ executive Kevin Goldstein said in a recent Fangraphs chat, communicating those findings to coaches, players and other personnel may be more important than anything. (You may remember that the Pirates got some press in 2014 for deploying Mike Fitzgerald as the conduit between analytics and the clubhouse.) And of course, you have to actually take action on the research to put a good product on the field.

There’s also the idea that progressive front offices not only invest in analytics, but also prioritize other areas of baseball operations (injury prevention, for example) that improve the on-field product. They are better across the board, with analytics being just one component. Still, the correlation of winning to sabermetricians is eye opening.

While the chart above doesn’t name the teams, some quick math shows the Pirates had the 23rd most wins from 2016 to 2020. The corresponding dot puts the Pirates at 6 full-time analysts in 2016. (Compared to 16 for the Rays.) That matches up with the Pirates’ front office directory from that year.

That’s almost 5 years and 1 best management team in baseball ago. Are things any different today? When GM Ben Cherington took over in November 2019, he inherited this group, which included 12 data analysts — double the size of 2016:

A little over a year later, Cherington’s staff remains at 12, with all the same faces, but a few different titles:

There are some other folks in the front office with the word “valuation” in their titles, and while they aren’t bunched near the “informatics” staff, they could have some analytical responsibilities. And as of a few weeks ago, the Pirates were advertising a new position called Player Valuation Analyst (memorialized on Fangraphs, if the job posting gets taken down) — which is worth a read.

So let’s call it an analytics team of 13. That’s clear progress since 2016, much of which should be credited to Neal Huntington and Company. Cherington appears to be making an imprint, less on the pure numbers and more on the position titles up and down the front office. And hopefully he is doing more to infuse data into all levels of evaluation and decision making.

The Rays, meanwhile, are now at 21 staff members involved in analytics, despite the fact that many baseball front offices are being pared down because of the pandemic’s financial hit. While the Pirates have expanded their “informatics” department, they still have some catching up to do. But as the Baseball Prospectus research indicates, perhaps adding analysts — at a few hundred thousand dollars per head instead of a few million dollars on, say, Gregory Polanco — is a cost-effective way for a small market like Pittsburgh to be more competitive.