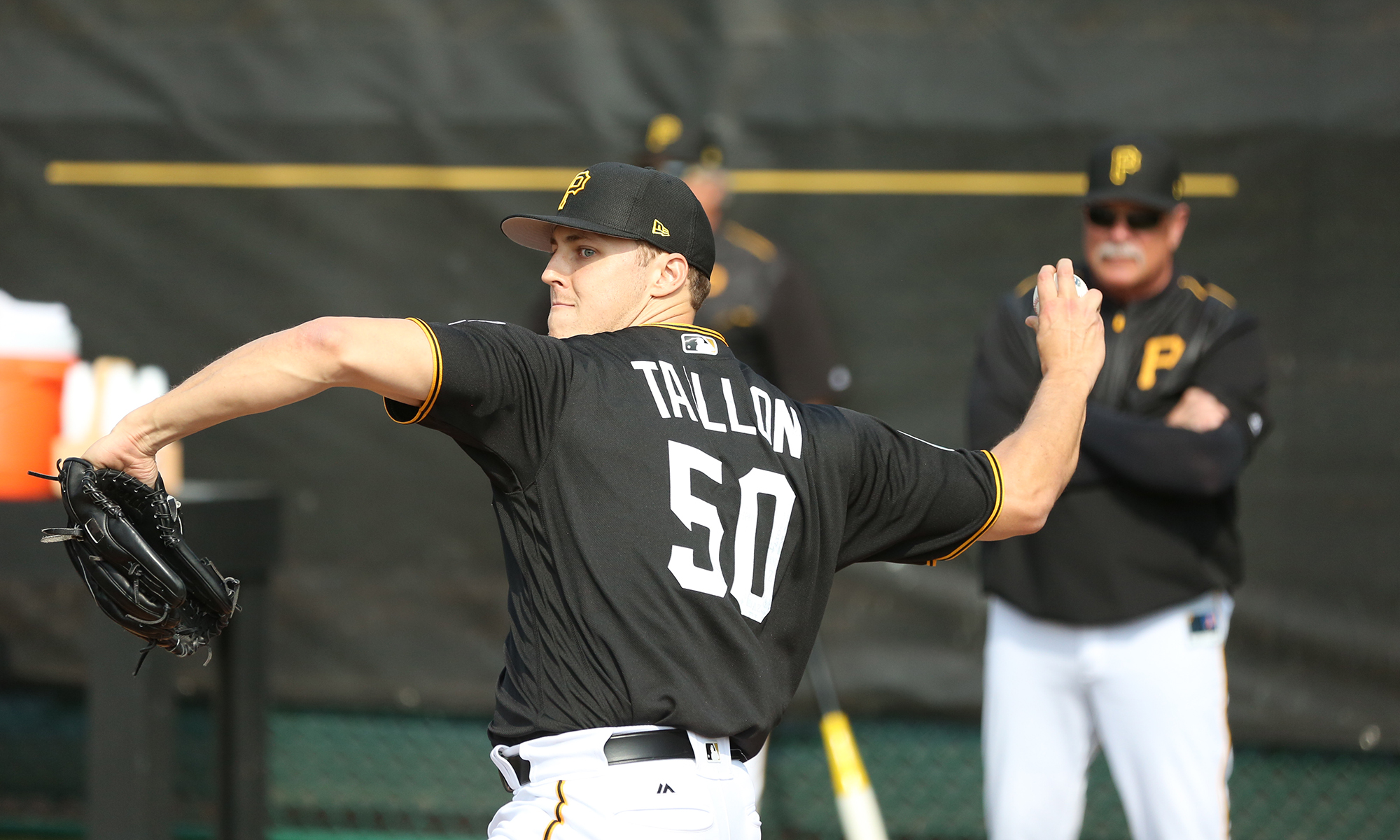 My first trip to Bradenton to cover Pirates Spring Training came over a two-day stretch in 2010. The only thing I remember about that trip is going back to my cheap motel room and writing up a story about how a high school pitcher somewhere else in the country had thrown a no-hitter.

His name was Jameson Taillon, although there was a brief moment where even I wrote it out as James Taillon.

A few months later, he was a Pittsburgh Pirate.

The following year, I made it down to Bradenton for an entire week to cover part of minor league camp. That was the first time I talked with Taillon, and as anyone who follows this site knows, it was the first of many conversations that went deep into his mechanics and pitching style.

It’s easy to take a deep dive into mechanics with Jameson Taillon. If you know what to look for on the field, you can utter a sentence question about what you saw, and he’ll give an entire article’s worth of insight in response. Even if you don’t know what you’re looking for, he’s going to give you insight. I’ve seen him make reporters look smart who otherwise are clueless about the current game of baseball and don’t have a scouting bone in their body.

I was that reporter at times, especially early on when every conversation with Taillon or Jim Benedict would lead me to discovering ten new things about the game I didn’t previously know. Conversations with both guys led to one of the best articles I’ve written to this date, detailing the evolution of Taillon’s delivery heading into the 2015 season.

That article is long out of date, as Taillon is constantly changing. He’s the human embodiment of exponential gain. You’re not going to see the same pitcher year after year. He’s going to always be adding to his game, always trying to upgrade or improve one area, and if he’s down, he’ll find a way to come back. You take a year off from seeing him pitch, and the next time you see him, you’ll notice ten new things you didn’t see before.

There isn’t a good track record with pitchers who have had Tommy John twice in their career. I would bet that Taillon beats the odds and bounces back better than he’s ever been before. That’s the trend. He beats Tommy John the first time, and comes back with new mechanics. He beats cancer and follows up with his best season in the majors. He always comes back improved.

It wouldn’t surprise me if he returns as a 3+ WAR pitcher for the Yankees, helping to lead them to a World Series along side Gerrit Cole. It wouldn’t surprise me if he had a successful career pitching left-handed in the event he would need another Tommy John surgery. For all that Taillon knows, I don’t think anyone ever taught him the word “Quit.”

So it doesn’t surprise me that Taillon landed four prospects in return from the Yankees, despite coming off the second Tommy John surgery and not having pitched since early 2019. The reporting out of New York is that Gerrit Cole lobbied the Yankees to target Taillon, largely because Cole saw the same thing everyone else saw from Taillon: He’s often the exception to the rule.

We could spend an entire week of articles lamenting the fact that the Pirates had Gerrit Cole and Jameson Taillon in the same system, and never had a winning season when they were both in the majors. It’s a sad fact that the 2021 season will be the first time that the 2011 first overall pick and the 2010 second overall pick will be together on a winning MLB team. And what a perfect segue into this trade return.

After all of the moves the Pirates have made to blow up their system and rebuild this past year, the end result is the deepest system I’ve ever covered in my 12 years as a Pirates reporter. It’s not the most top-heavy system. That still belongs to Neal Huntington, during the era when the system had guys like Cole, Taillon, Tyler Glasnow, Austin Meadows, Starling Marte, Gregory Polanco, and many others who either didn’t work out in Pittsburgh, worked out elsewhere, or both.

You can have all of the talent in the world, but it won’t lead to MLB wins if you don’t develop that talent properly. Ben Cherington now has a lot of talent in the system, with the most exciting part of that being the lower level, higher upside guys that could increase in value under a good development system.

The Pirates had a broken development system under Neal Huntington, but it wasn’t completely ineffective. It was good enough to develop unknown guys into top prospects, and get top prospects to the majors. The system did leave a lot of talent on the table. Cherington has been making changes to the system since he arrived, and as I wrote after the Joe Musgrove trade, he seems to be doubling down on that system. If he can fix what was broken, then I see a World Series in the Pirates’ future, especially on the back of this rebuild.

The latest addition brings in four new prospects who Baseball America had rated among their top 32 prospects in the Yankees system.

Here's how the four prospects ranked in the Yankees system,

Miguel Yajure looks like a guy who could arrive in the Pirates’ rotation this year, and he’s not going to have much competition holding him back after all of the moves that have been made. He’s recently added a cutter and a slider, joining his previous three-pitch mix.

Roansy Contreras is a lower level pitcher who saw a velocity increase right before the shutdown in 2020, and is working on his secondary stuff. He does throw a good changeup, and could stick as a starter if he develops a good out pitch.

Canaan Smith is a lower level outfielder who has some impressive raw power, and the ability for double-digit steals on the bases. He doesn’t grade as a good defender in the outfield, but that’s an acceptable trade off if the bat develops. The biggest questions about him are whether he can handle upper-level pitching. The 2020 shutdown delayed the answers to those questions, and now the Pirates will benefit from the value increase if he proves it in their system.

Maikol Escotto is the youngest player in the return, an 18-year-old shortstop out of the Dominican Republic. He’s shown a lot of raw power in the Dominican Summer League, along with some fielding skills that could give him a chance to stick at shortstop. According to Baseball America, he had 12 homers between the DSL and extended Spring Training in 2019, with 106 MPH max exit velocities.

If there’s a theme with the above players, it’s the same theme we’ve seen from the previous trade returns. That theme is to get players who have yet to show tangible evidence that they’ve improved.

Yajure added two new pitches, hoping for a potential out pitch. Contreras saw a velocity increase and is working on an out pitch. Smith hits the ball hard, but is unproven in the upper levels, which is typically when a player like him starts to move up the prospect ranks. Escotto is raw, but has already shown a lot of potential at the lowest level, where he’s nothing but projection.

None of this is to say that these guys will never increase their value. This is just to say that they haven’t increased their value yet. We all know the path for each player to increase their value. We know that they all have the tools to be MLB players. If you put them in a good development system, along with many other similar players who have yet to see a realized gain in value, you’ll inevitably get a lot of good MLB players.

The Pirates have a player in the majors right now who you could dream about having future MVP seasons. Ke’Bryan Hayes made his debut in September 2020, and lit the majors on fire. He’s a top prospect with limited MLB success, and all of the tools to suggest that he’ll be an All-Star and MVP candidate in the future. And yet, he’s not a guarantee, because no prospect is a guarantee. No human being is a guarantee.

Look no further than Jameson Taillon. Life happens. Injuries happen. Illness happens. Getting stuck in a system that forces you to throw 60-70% fastballs happens. Taillon hasn’t had a bad career, and I don’t think his career is close to being finished. But he hasn’t come close to the pitcher he was originally projected to become, and you can’t just fix that by going back in time and fixing the development system.

In the case of Hayes, every team in the majors would trade for him right now, as the risk of him becoming an MLB player is almost non-existent, and the chances of him reaching his upside are higher than a lower level guy. The Pirates wouldn’t be able to afford a prospect like Hayes in a trade, unless they unloaded a big portion of their system.

Deep in the minors, there are other players who have the chance to be just as good as Hayes. If Hayes currently has a 50% chance of having an above-average or better career, then a high upside DSL guy might have a 5% chance, based on his current skills and development. At one point in time, Hayes was in that same range. You could argue that if he never got into mountain biking in high school, he never would have escaped that 5% chance of being an above-average MLB player. He did get into mountain biking, and it elevated him to being the 32nd overall pick in 2015.

I made the percentage numbers up in that last paragraph to illustrate a point: It’s not about acquiring players like Ke’Bryan Hayes. It’s about when you acquire those players. Ben Cherington has been adding in quantity to the lower levels, but don’t fall into the trap of assuming there’s a choice here between quantity and quality. The word “quality” in that sense is often misused, often just attributing quality to a lower risk profile.

I like the trend that Cherington has shown, adding guys who have yet to see realized gains. He’s banking on his development system to take those guys from the “quantity” stage, to the point where people can see the “quality” that was there all along. And as long as people see lower level returns like these as simply “quantity over quality”, the Pirates should continue making them. After all, quantity in the lower levels is the easiest way to eventually get the “quality” that prospect evaluators seek.

Especially if you have a good development system.

And that is more crucial for the Pirates now than ever before.