We will start hearing about agreed upon deals as soon as the signing period opens up, but there won’t be any deals official until a short time later when the players actually sign their contracts. The Pirates will be signing approximately 15 players today and then another very small group of players a short time later. That could be days, or more than a week, but it will happen and we will post about it here when those deals are also official. When deals are officially done today, we will announce them individually and include a scouting report for each player. Later on in the day, our 2021 International Signing Tracker will be posted. You should bookmark that page and check on it throughout the year. Every signing from now until the period ends on December 15th will be posted there, along with a link to an article about the signing. That being said, a large majority of the bonus pool money will be spent between the players signing today and the players in that second small group.

The big name expected to sign today is Dominican outfielder Shalin Polanco, who is rated eighth overall in this draft class by Baseball America, 11th by MLB Pipeline and Fangraphs gives him a 40 FV with medium risk. He’s expected to get $2.3 M. Here’s a video of an elite bat in this class.

Shalin Polanco is a name to watch in the Pirates international draft class.

He's expected to ink a bonus in the $2.5 million range.

Polanco has officially signed, as have a few others. I’m trying to get names of the official signings before posting their scouting information.  Polanco is the big player here (that’s why he’s getting 39% of their total bonus pool this year), but there are some other really interesting players coming up.  Polanco has already shown five tools, but there’s much more in the tank as he continues to fill out. He’s added about ten pounds of muscle/good weight to his 5’11” frame since the summer, with plenty of room to add more. The approach at the plate is advanced and he’s been making consistent solid contact at an early age. 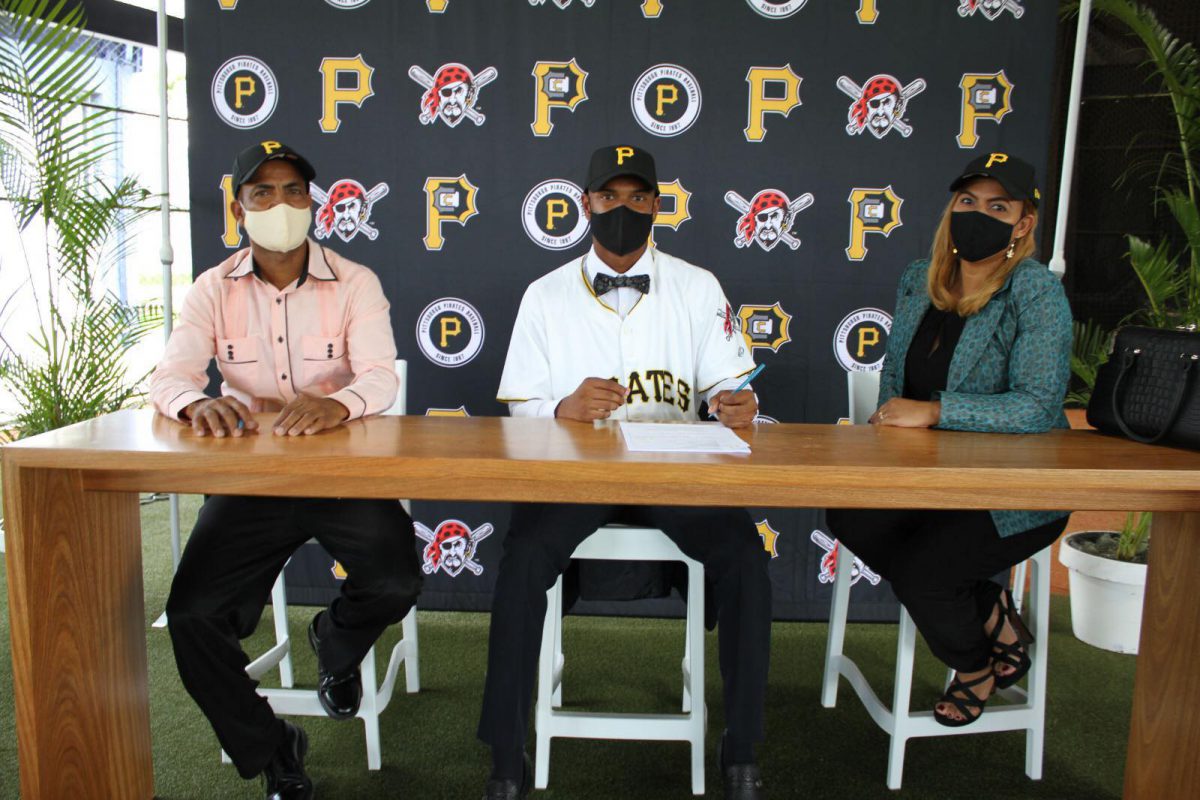 UPDATE #2: Player number two is official, Esmerlyn Valdez, huge power potential bat, great physique, strong kid at 6’2″, 180 pounds with room to add. He’s a corner outfielder, average speed/defense. While he has just one plus tool, it’s the best power potential in this group and a legit plus potential 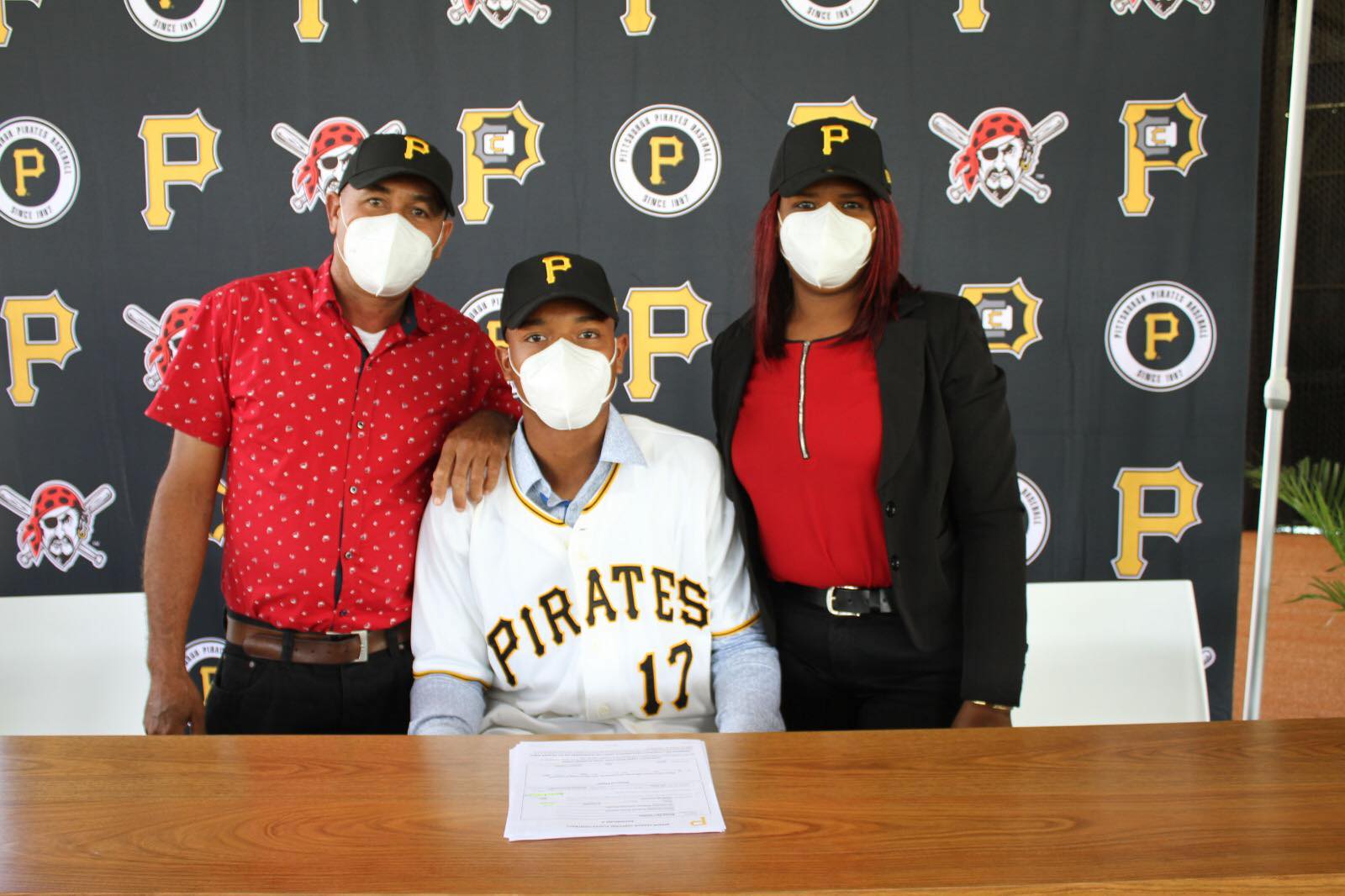 Player #3 is Miguel Sosa, the lone catcher so far in this signing class (among all players agreed to). He’s another legit power bat who really barrels the ball already. He’s 5’10”, 181 pounds, with room to fill out more, giving him plus power potential. He also has a very strong arm and moves well for a catcher. The downside here is that he’s very raw as a catcher and there’s not a guarantee that he sticks there, but the bat will play up elsewhere if necessary. 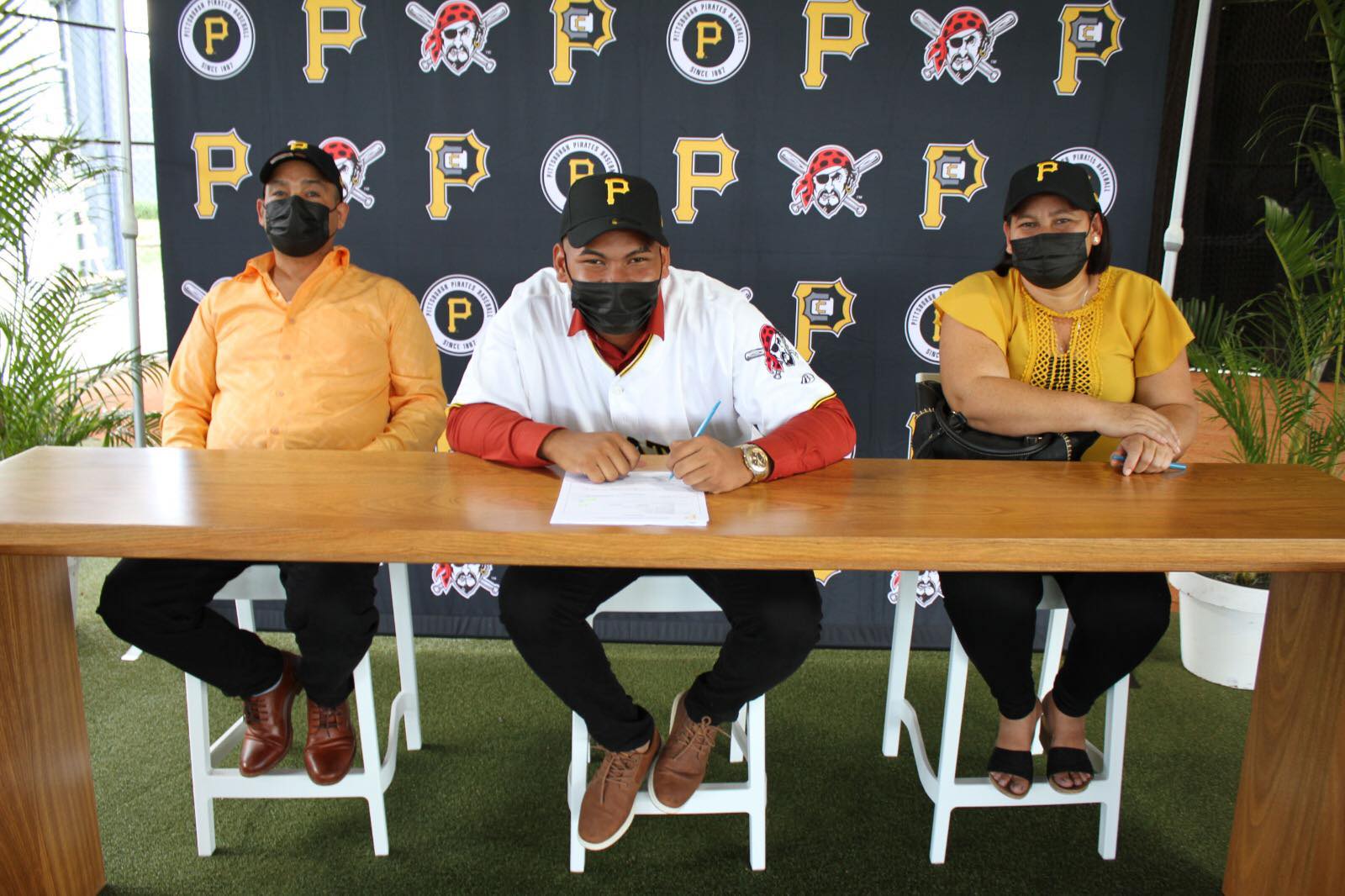 Player #4 just became official, though he was a known commodity already. Darlin Diaz, right-handed pitcher. Most of these pitchers are going to sound the same today because the Pirates have been targeting the same types since last year. Almost all of them have projectable frames, athleticism and good arm speed, clean deliveries. Diaz was 86-90 MPH in July and has been up to 92 since then. He has a feel to spin his curve, and advanced feel for his changeup and he has all of the traits of a future starter.  He’s 6’0″, 177 lbs. There’s a more advanced, higher upside pitcher coming up later 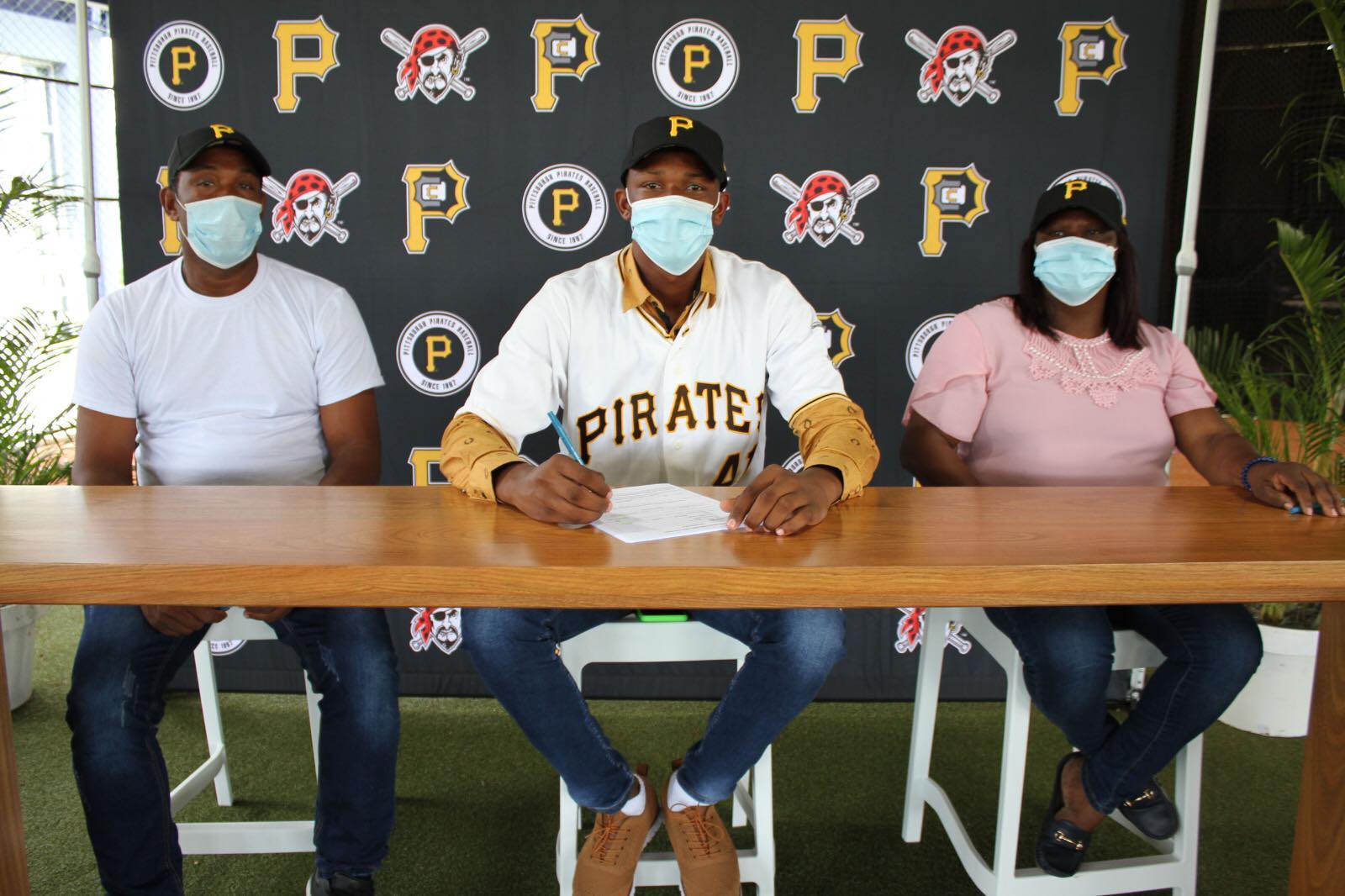 As a quick side note, all of these players are 16-17, except one I’ll note once he signs. Polanco turns 17 on February 6th and four of the players (none of them mentioned yet) are slightly younger. As reference, the youngest anyone could be in this class is someone who turned 16 back on August 31, 2004.

Player #5 is outfielder Eddy Rodriguez, another power potential bat who profiles as a corner outfielder. He’s listed at 6’0″, 180 pounds now and has grown a lot recently into that current ht/wt. He’s not quite in that Esmerlyn Valdez power/bat potential now, but not far behind. The four hitters here so far have the top four power potential bats in today’s group. 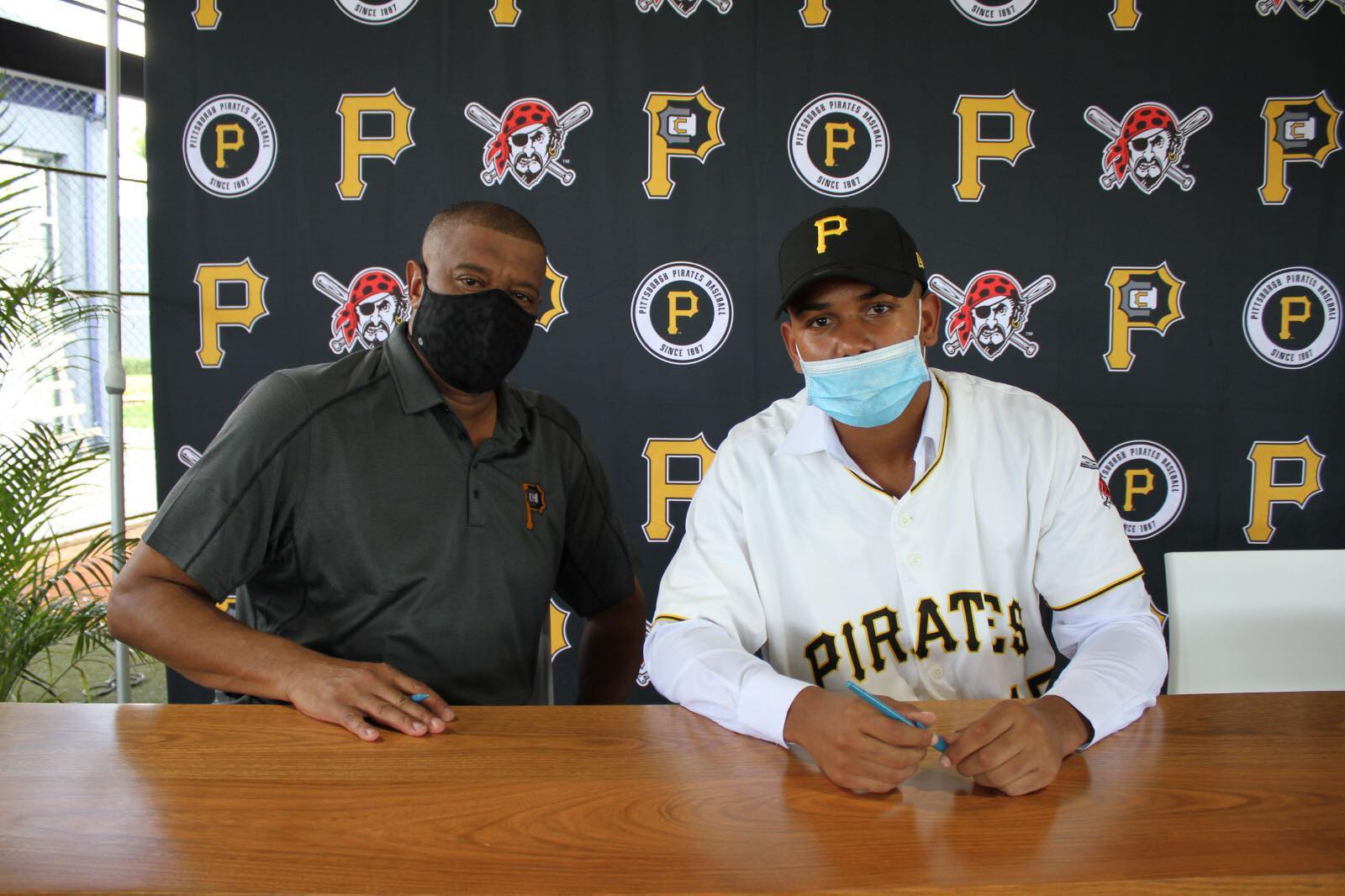 Pirates just announced the signings, so here is our tracker to bookmark. I’ll have reports loaded here shortly. If I get photos I’ll add them later.

The second best player signed today is likely shortstop John Zorrilla, who coincidentally also got the second biggest bonus. He has HUGE potential upside,  great athleticism, a big frame, the ability to stick at shortstop. There’s potential here for five average tools or better. Right now he has a decent approach at the plate, with great bat speed and a clean path to the ball. Has added height and weight since the summer, now standing at 6’1″, 175 pounds. Zorrilla received $450,000 according to Jesse Sanchez from MLB. 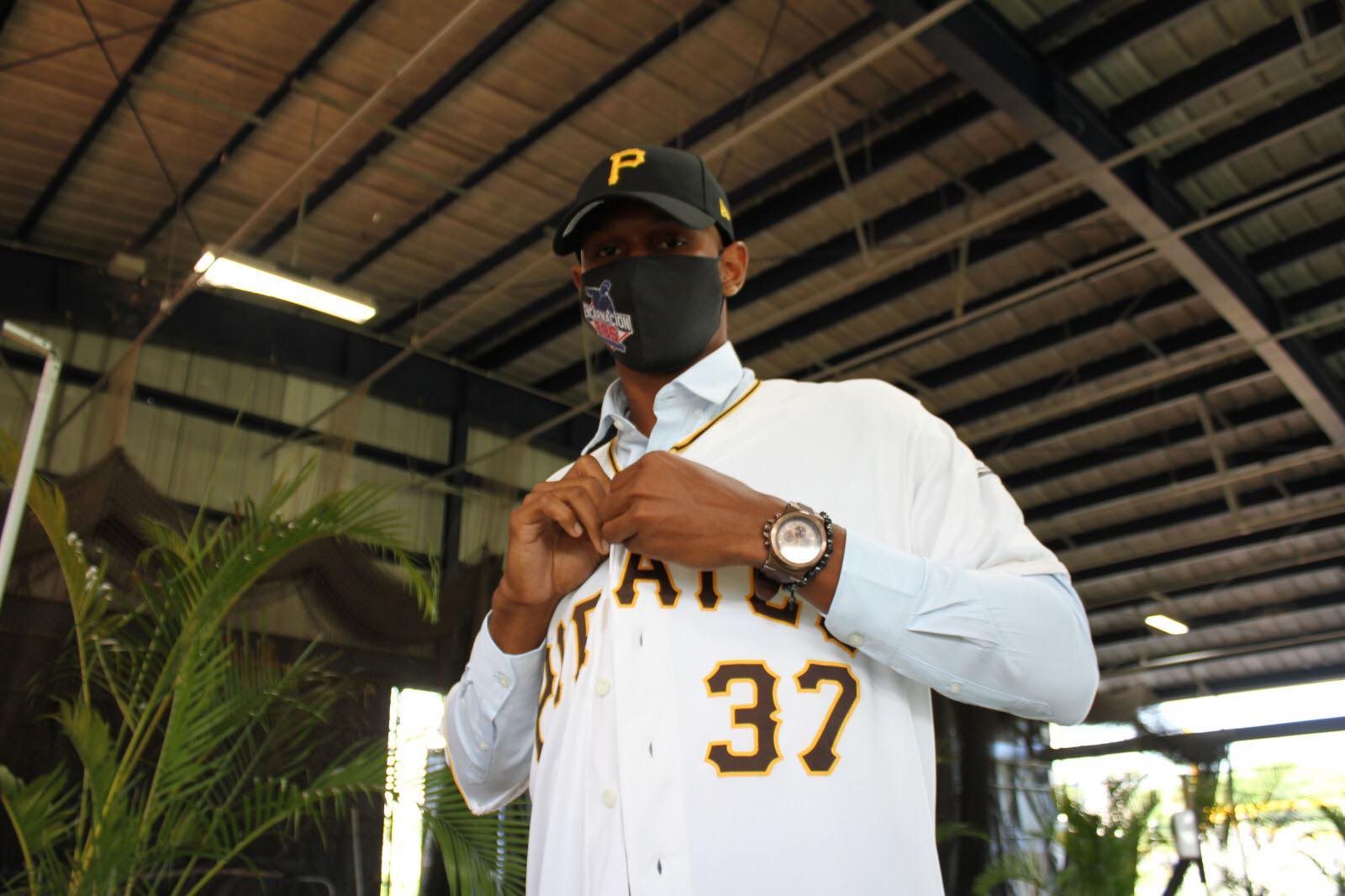 Right-handed pitcher Jose Garces is considered the best pitcher right now in this class and he has upside. He’s from Colombia, and has a great frame that has recently shot up three inches, now standing 6’2″, 150 pounds, with obvious room to fill out. There is a lot of athleticism and current skills, along with the projection. He was throwing 83-88 MPH in the summer and has stepped up to 90 MPH recently. There’s an advanced feel for pitching and starter traits here. He has a clean arm action and a great feel for spin on his curve. His changeup is already an above average offering and he throws strikes. 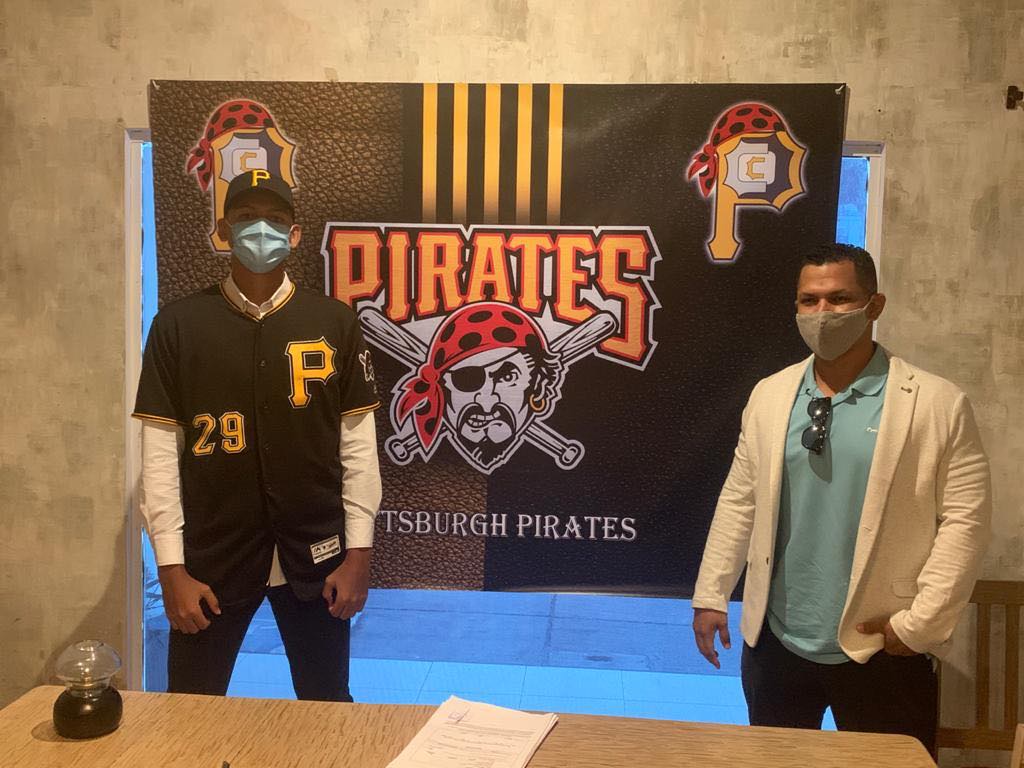 Shortstop Rubel Lebron has legit 80 grade speed. He’s a quick-twitch athlete, explosive athleticism and an aggressive style. The arm is average and he might eventually move to the outfield, but he will be developed as a shortstop for now. The speed is off the charts good. He’s 5’9″, 150 pounds. 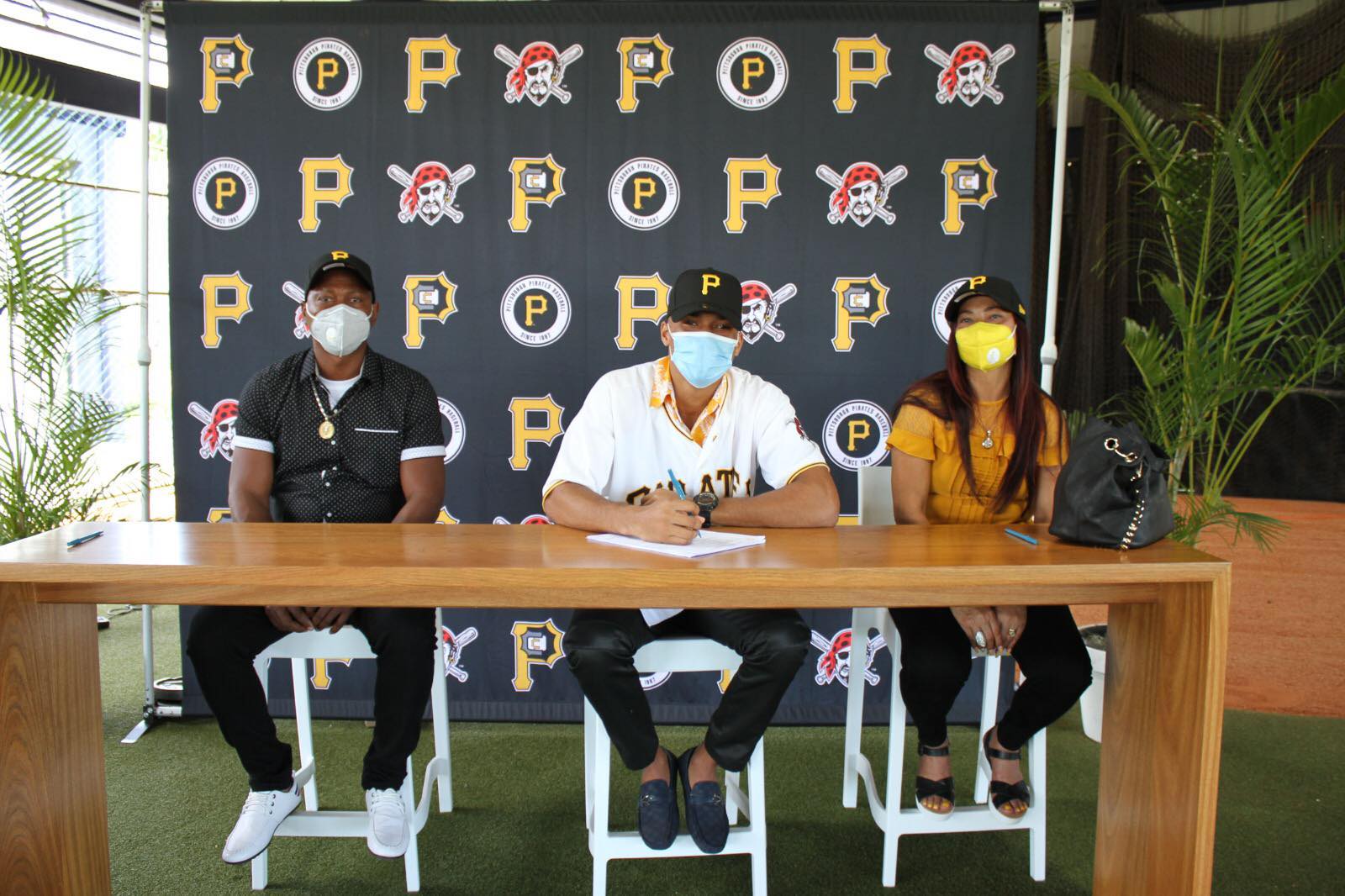 Outfielder Rodolfo de la Cruz does a really good job barreling the ball. He has great hand-eye coordination, currently a solid all-around hitter, and there’s a high potential bat here. He’s going to be in center field now and he has the ability to stick there. He’s 6’0″, 160 pounds, so there’s plenty of filling out left. 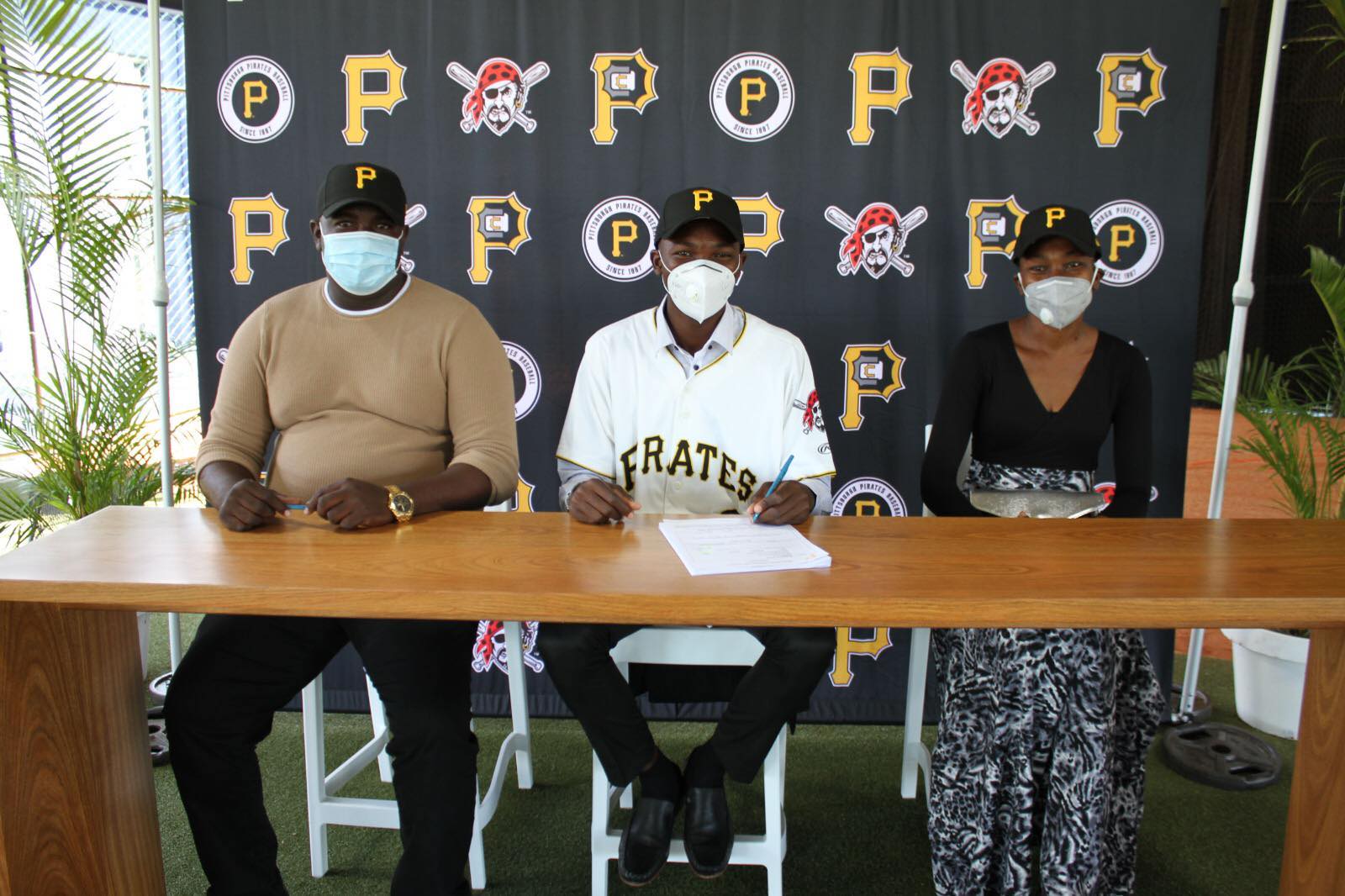 Right-handed pitcher Luigi Hernandez has good working arm action, good arm speed, an advanced feel for curve, but his slider is a work in progress. His fastball sits, 86-89, with good life. He’s had it up to 92 MPH. He has a solid changeup as well, with the ability to throw strikes. Lots of projection and athleticism here. He was born in the Bronx. Just like Diaz and Garces, there are good starter traits here. He’s 6’0″, 185 pounds. 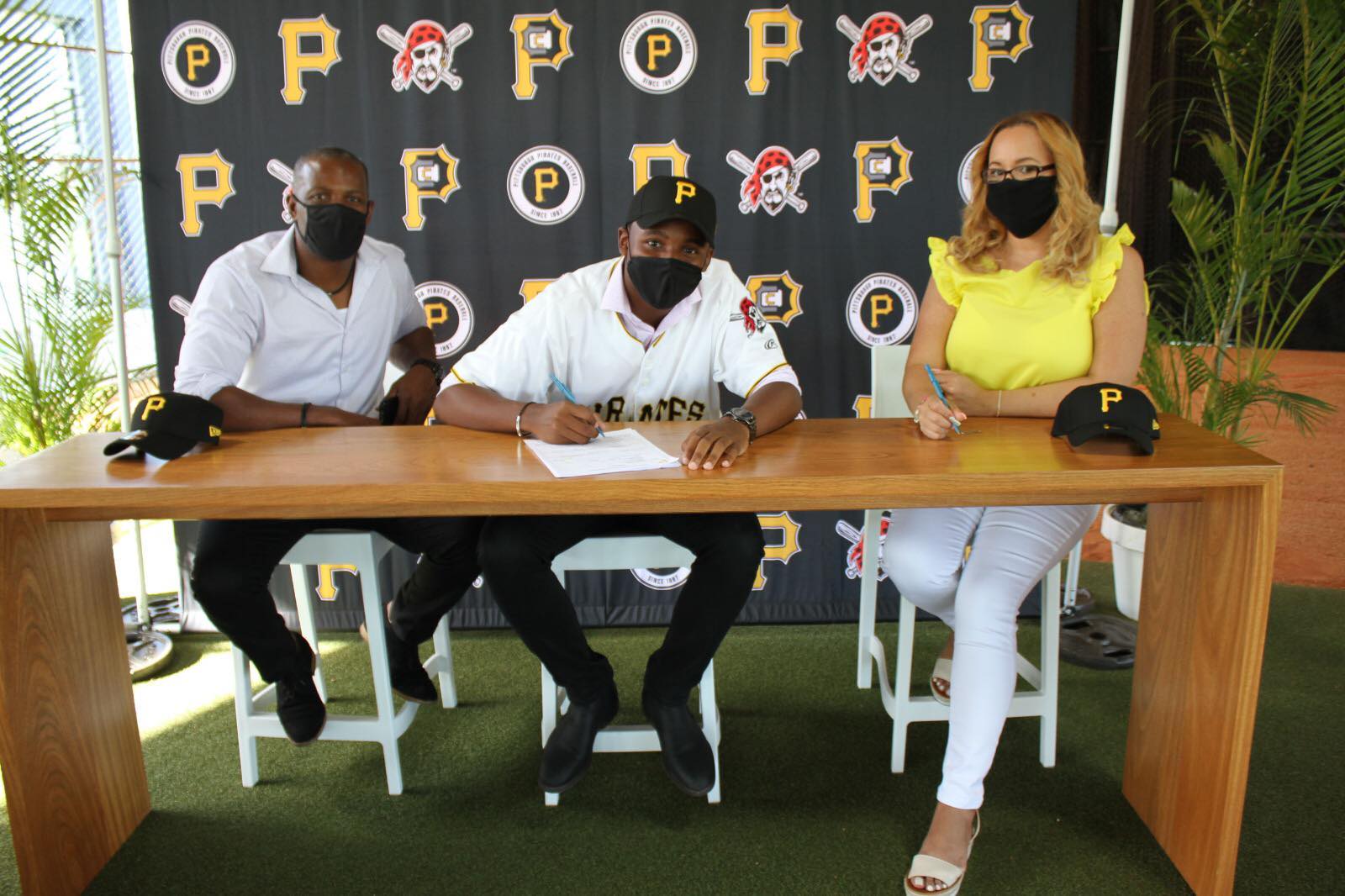 Right-handed pitcher Andres Sierra has a  fastball/slider combo, with the fastball in the 86-90 MPH range. He has the athleticism and arm speed that the Pirates target, nice feel for spin on the breaking ball and nice shape to the slider. He’s 6’1″, 190 pounds. 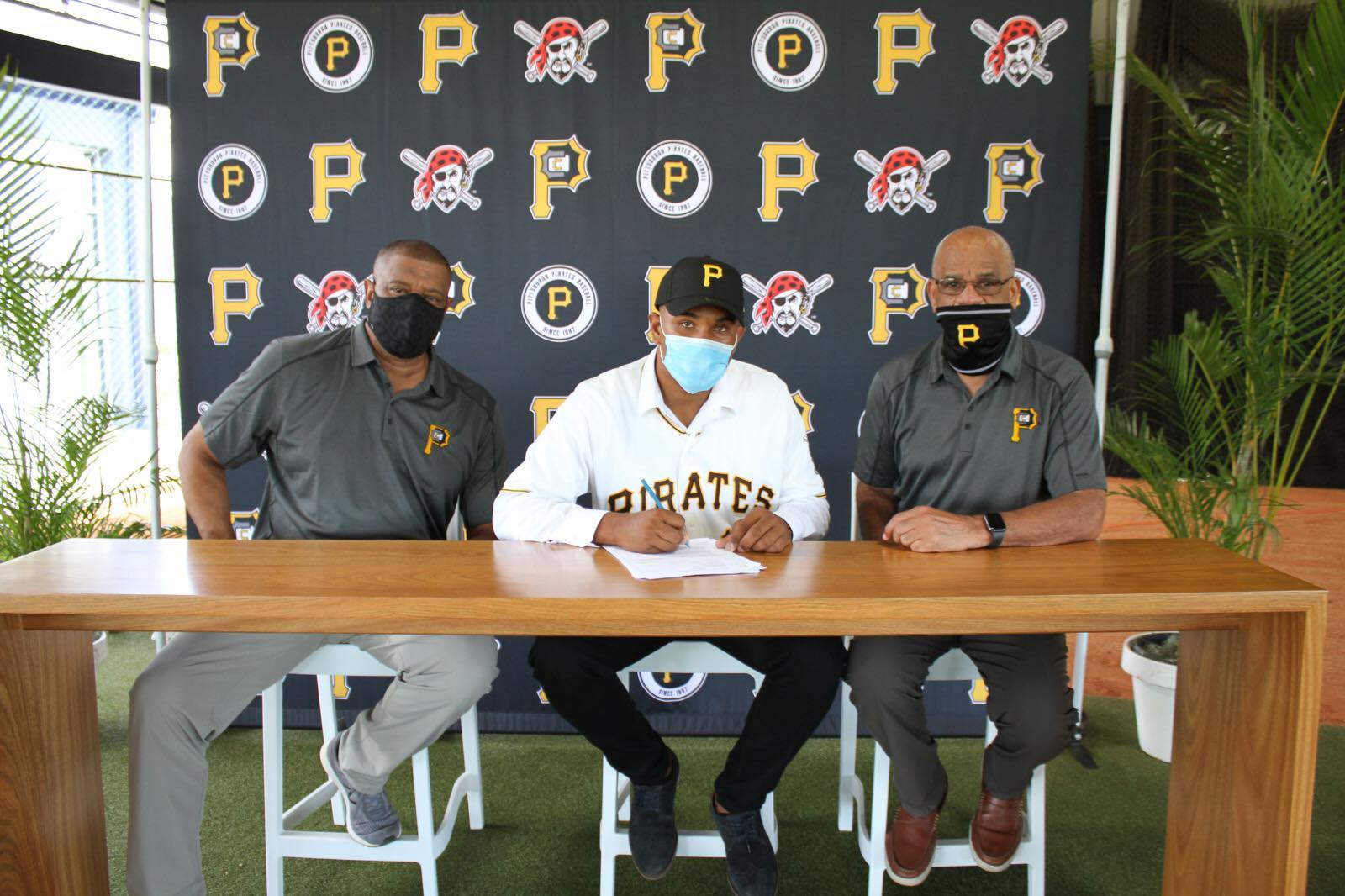 Right-handed pitcher Antwone Kelly comes from Aruba, which isn’t the hotbed of talent like the Dominican and Venezuela, so there’s so real rawness here. He has a 83-90 fastball, with the ability to spin the curve ball. He’s athletic, with a broad frame that offers solid projection. There’s potential for a late developer, as he has all of the same traits as other more advanced pitchers in this class. He’s 5’10”, 183 pounds. 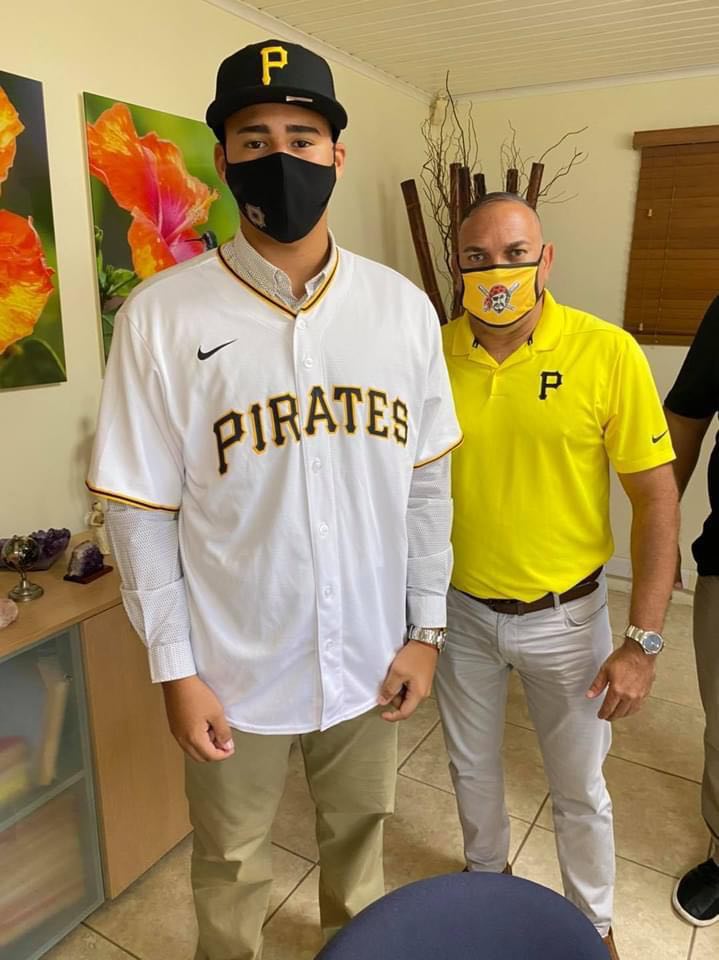 Right-handed pitcher Jesus Clode throws 90-94 MPH, currently the hardest in this class, though he’s already 19 years old. He’s a late bloomer, with quick arm action, a 74-76 MPH slider, a 78-81 MPH changeup, with a really good feel for both pitches. It gives him two solid secondary pitches that rate above average. He throws a lot of strikes, and despite his age, there’s room to fill out still. He’s 6’2″, 180 pounds. 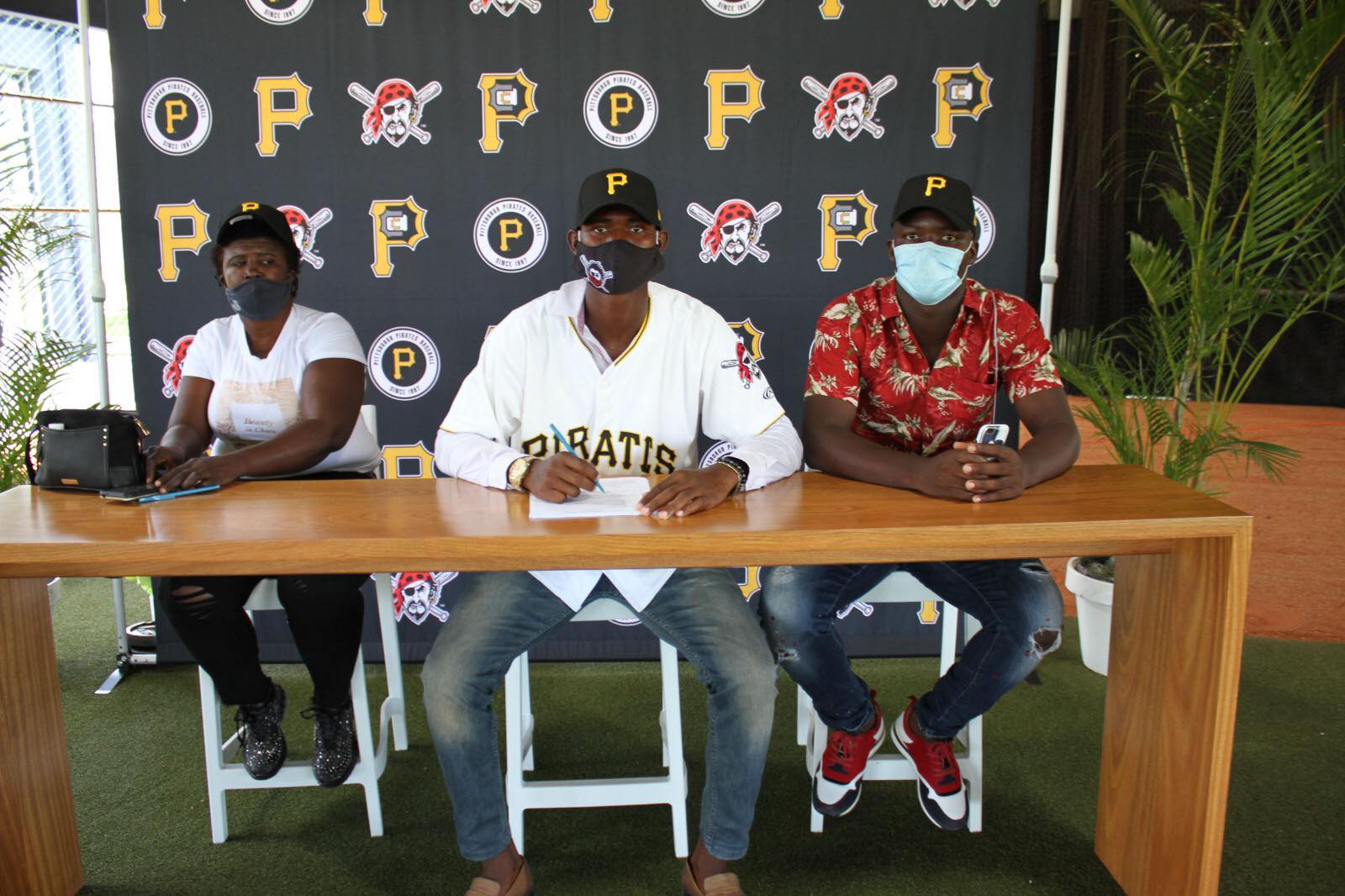 Venezuelan outfielder Ruben Vizcaya is an aggressive player, who plays with intent. He’s a potential impact hitter, who has above average speed. He’s a center fielder with a good arm, and could develop into a plus defender down the line. There’s still lots of room to fill out a 5’10 frame and add some more power to his game.

We didn’t have a photo for Vizcaya, but this is one that he posted on his own social media 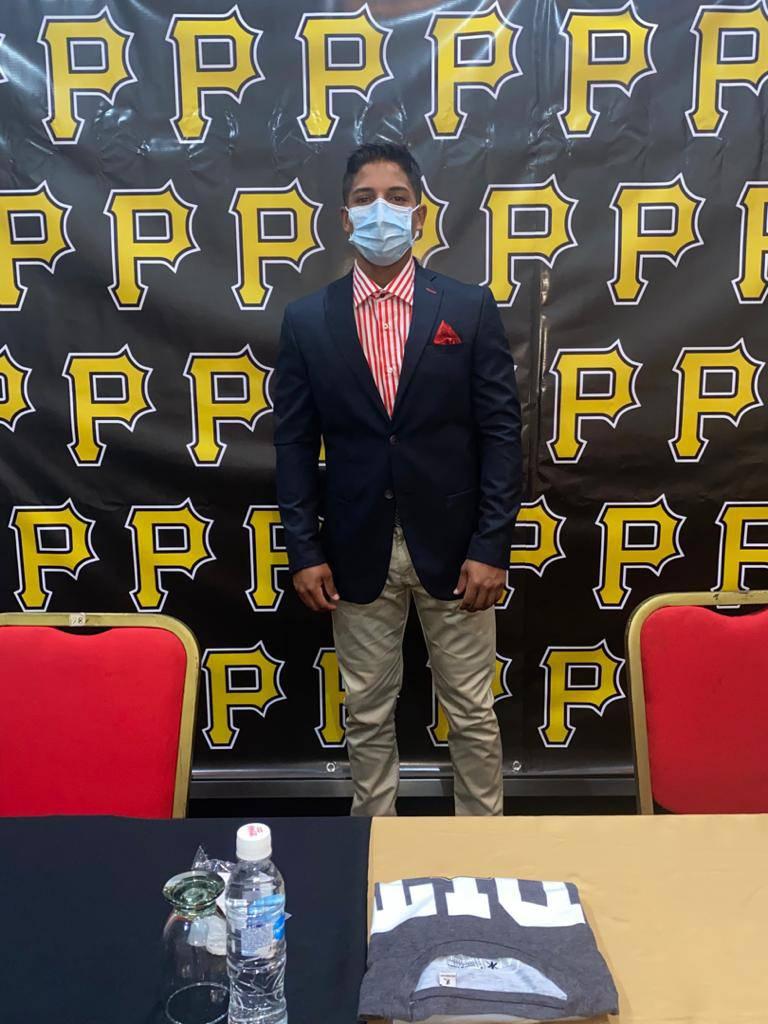 Wesley Zapata is a 5’10” shortstop, wiry frame, who has added a lot of weight already to get to 150 pounds. Despite his size, he barrels the ball well and shows terrific hand-eye coordination. He has everything you’d like to see on defense to be able to stick at shortstop. He’s a real baseball rat, loves playing the game and puts forth terrific effort. 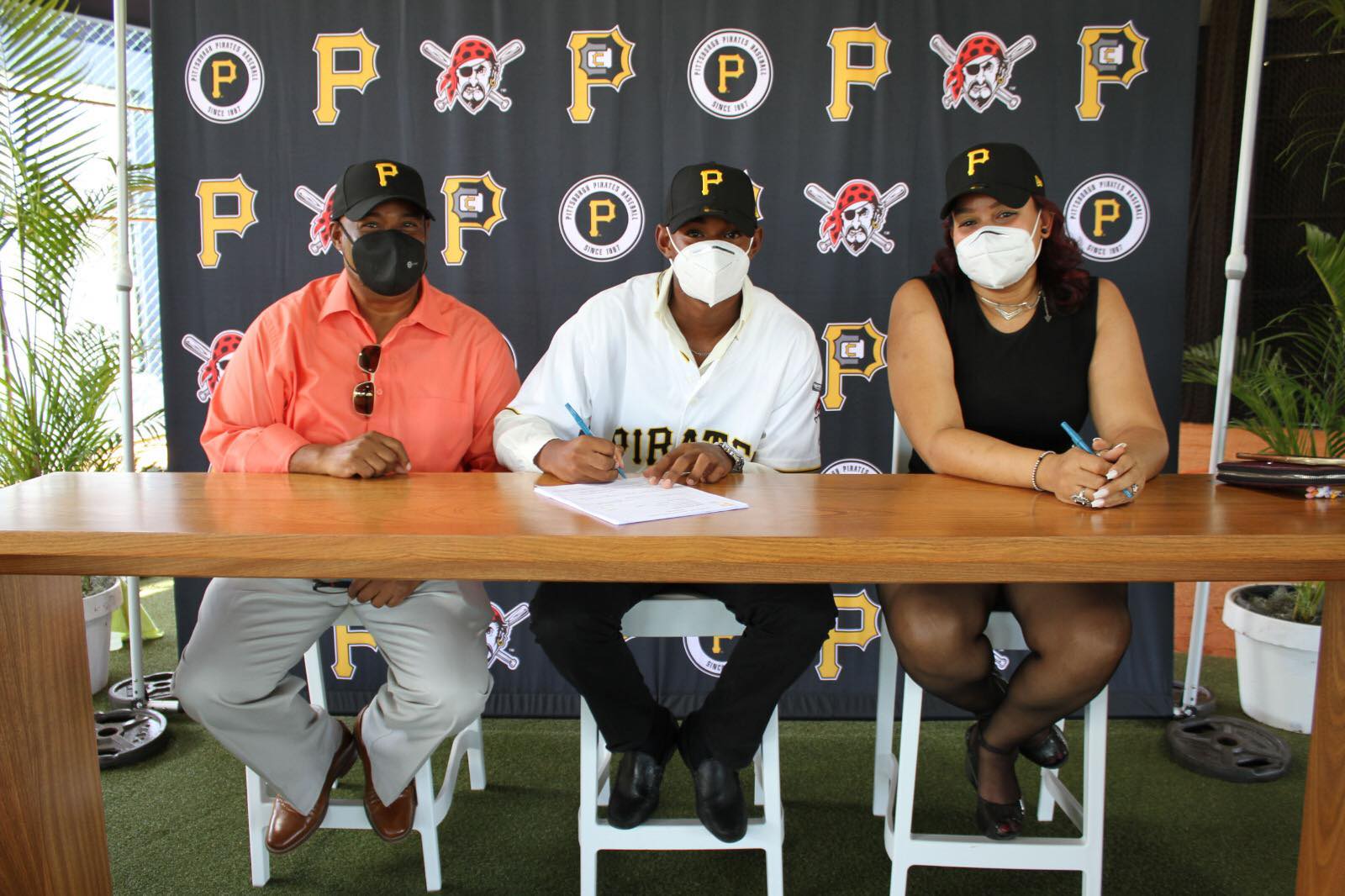