Likewise, our prospect rankings for the 10th Anniversary Prospect Guide have been finalized (pending changes that come from the Rule 5 draft) and will be heading to the printer this weekend.

We made a lot of changes to the book this year, leading to a better presentation of information for each prospect, including a detailed breakdown of the likely possibilities for each player. This will help to explain the upsides of each player better, what they need to do to get to that point, and where they could fall short along the way.

Below, you can see an example of the reports, looking at our number one prospect in the system, Ke’Bryan Hayes. 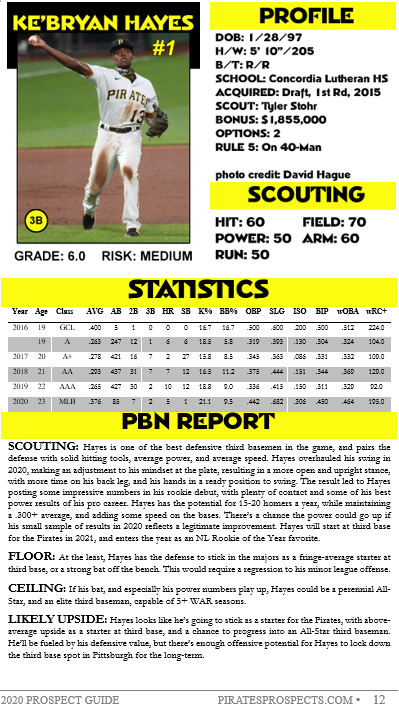 This has been a strange year getting reports on prospects. There were no minor league games, very little action for minor league players, and unless there was a situation like Hayes where a prospect made his MLB debut, there were no stats to show progress. We’ve been doing this for a long time, and were able to use our connections to get updated reports on what players were working on, along with details of their progress, giving you the best collection of information on the Pirates’ system heading into the 2021 season.

The book will also feature exclusive articles breaking down the future of the Pirates’ farm system, along with input from a one-on-one interview I had with Pirates’ General Manager Ben Cherington.

The Prospect Guide has been the fuel of this site for a decade, allowing us to cover the Pirates’ farm system in the extensive way that we do. We have a limited amount of paperback books available this year, heading to print this weekend and hopefully shipping in time for the holidays (more on that below). The main goal for the book is to give you the best look at the Pirates’ farm system, while also funding our operations so that we can continue our coverage during the 2021 season.

Your purchase of the 10th Anniversary Prospect Guide will make that possible, while giving you information on every player in the system as the Pirates try and build toward their next contender.

Order the 10th Anniversary Prospect Guide today by heading over to the PBN Shop!

We’re selling custom packs of baseball cards this holiday season, which make great small gifts for the Pirates fans in your life. Each pack of cards is $10, and includes all Pirates cards, with a lot of prospect and rookie cards.

We’ve also got a sale on individual baseball cards, which are 20% off using the code “CARDS”. This code doesn’t work on card packs.

Each pack of cards will include:

The last time we printed a book during the holiday season and shipped it out, our deadline for print was the weekend following the Rule 5 draft. We’ve seen pretty quick turnaround times in the past, using local printing options, and that’s our plan again this year.

The recommended holiday ship times for USPS are December 18th for First Class mail, which is next Friday. Our goal is to have the book printed and all packages shipped out by that date.