This could be it, guys.

This could be the final year I’ll get to write about the unrealized potential of Gregory Polanco with the Pittsburgh Pirates.

Polanco has one more year guaranteed under his five-year, $35 million extension that he signed at the start of the 2017 season. Without that extension, he’d be a free agent right now. Instead, he’s owed $11 million in 2021, with a $12.5 million option in 2022 that will almost certainly be bought out for a price of $3 million.

Unless Polanco finally has his breakout season in 2021. He wouldn’t be the first 29-year-old to have a breakout season after years of being a highly regarded prospect, followed by a young MLB player who would command $35 million guaranteed in a five year deal, just based primarily off his still untapped potential at that point.

We’ve yet to see Polanco’s potential, at least in terms of what he was expected to become. At best, he’s been a 2.2-2.5 fWAR right fielder, which isn’t horrible, but is a far cry from the expectations when he was described as “The Walking Toolshed.”

Injuries have derailed his progress along the way. It seems like there was a stretch where every time he started to get hot, he would immediately get hit with an injury. That didn’t really explain why he was going through so many cold periods.

Polanco actually played in more games in 2020 than in 2019, showing a much better result from a health perspective during a shortened season. Even with better health, it’s hard to look at the numbers and find encouragement for a future breakout.

The difference between 2018 and 2020? Polanco’s walk rate was four percentage points higher back then, and his strikeout rate was almost 16 percentage points lower. He had a .245 isolated power, versus .172 in 2020. And that was at a point where he was starting to have issues running, which saw a serious decline in his base running value and his range in the outfield.

If I laid those 2018 numbers out as a possibility for Polanco in 2021, I think you would take them, if for no other reason than Polanco is a sunk cost at this point, and getting 2.5 WAR unexpectedly from a sunk cost is always a positive outcome.

But would you pick up his option for the 2022 season?

I think it would be more probable following a 2.5 WAR season to see Polanco’s option picked up. It would be an added $9.5 million, but would also give the Pirates with an option for 2023 at $13.5 million, with a $1 million buyout. And if Polanco can breakout at age 30, then that 2023 option…

Let’s step back down to reality for a second. The 2018 results are still not enough to 100 percent keep Polanco in the system beyond the 2021 season, and yet those numbers are an upgrade over where Polanco has been the last two years.

His power is down, his strikeouts are way up, and his defense is unreliable.

Where in all of that do you find the hope that he could break out in 2021, to the point where he could even improve upon the 2018 results? 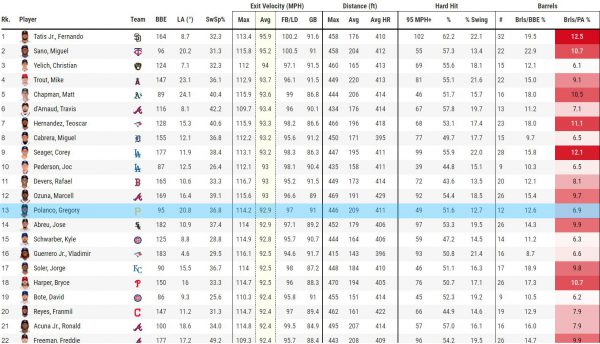 Or maybe in this… 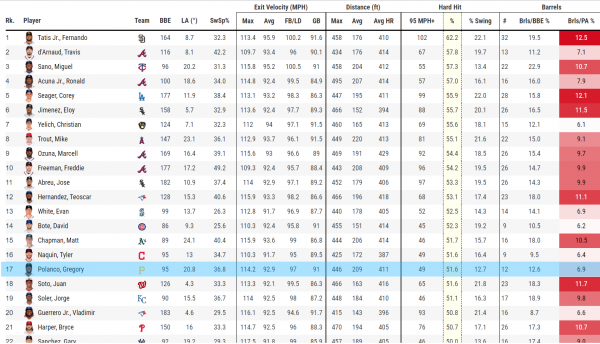 His average exit velocity went to a career high 92.9 MPH.

His launch angle was elevated two degrees, which probably helped him to keep the ball off the ground, with a career low 32.6% ground ball rate.

Hitting the ball hard and in the air is a simple recipe for success as a hitter in today’s MLB. It does require the right approach at the plate, and Polanco’s 37% strikeout rate isn’t showing that approach. When you break down his swing, you see that he’s taking a very aggressive approach.

On the bright side, his defensive range improved to the best levels since 2017, and he had positive values in DRS and PM for the first time since that season. His defense probably won’t be an asset going forward, but there’s hope it won’t be the disaster it has turned into the last few seasons.

The swing and miss is a problem. Polanco has always had a long swing with holes in it, but this is an extreme. He’s starting to show his elite power potential, and that could lead to massively better results if he can patch up the swing.

The Pirates have one more year to make it happen under their watch. If it does happen, and Polanco finally breaks out, suddenly those two option years look really nice for a rebuilding team with a lot of prospects projected to arrive in 2022 and 2023.

If it doesn’t happen, then next year’s right field recap will allow me to finally put over a decade of watching Polanco and dreaming about his upside to rest.

Only to probably see him break out the following season with a new team.