Here’s a quick look at the pitch selection of some of the Pirates’ pitchers over time.  There aren’t that many pitchers for whom this process is worth much.  The interesting part, at least to me, is to see what they were throwing for the Pirates before this year and then see what changed this year.  Trouble is, not many guys meet those parameters.  Some guys missed this season (Jameson Taillon, Chris Archer–it would have been really interesting to see what the new front office did with these guys) or most of it (Kyle Crick), some had little or no previous track record with the Pirates (Chris Stratton), some just didn’t have much of a sample size (Mitch Keller), some were rookies (J.T. Brubaker and many others), and so on.  And I could care less about Derek Holland. 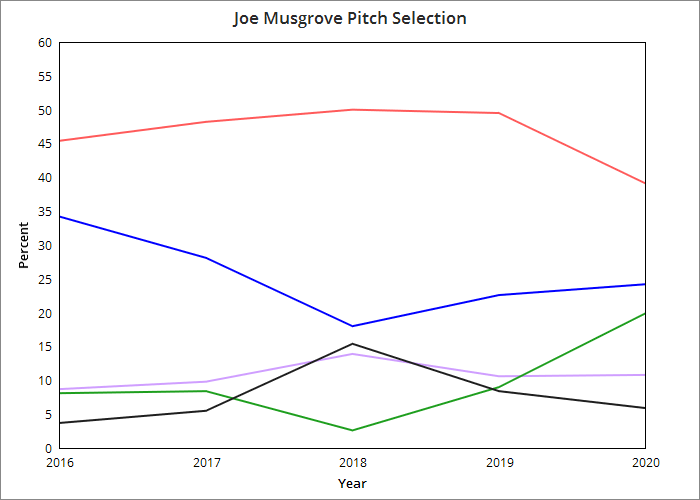 This is pretty much the standard Pirate pattern:  about a ten-percentage-point drop in fastball usage, with the “extra” going to breaking balls, more often than not a curve.  Not a lot of changeups, although a bit more than some of the team’s pitchers.  One difference:  Musgrove does throw a cutter.  In fact, on the Pirates he pretty much throws the cutter. 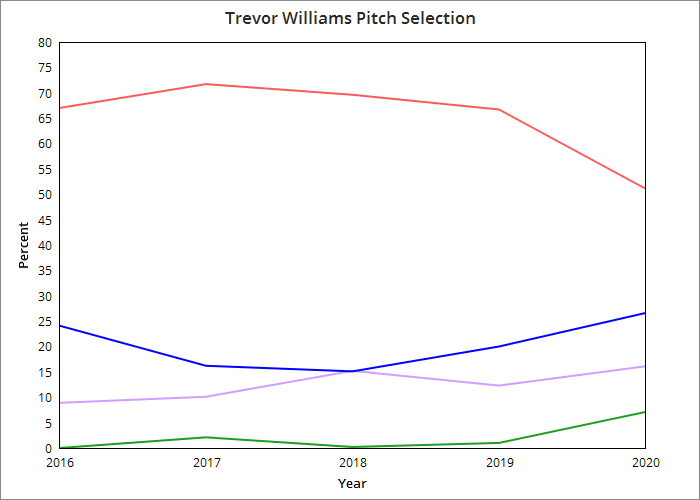 Williams was more fastball-heavy than you’d expect, although that red line represents a mix of four-seam fastballs and sinkers, mostly the former.  (I mostly haven’t broken the two out because I’m skeptical whether pitch trackers can distinguish the two all that accurately.)  When he was pitching well, Williams’ fastball was his most effective pitch.  The last year and a half, of course, nothing has worked for him.  Here’s the slugging average against his four-seamer and sinker, from brooksbaseball.net.  I’ve added his slider in, too, because it’s effectiveness seems to track his fastball effectiveness.  (Four-seamer=red, sinker=black, slider=blue.) 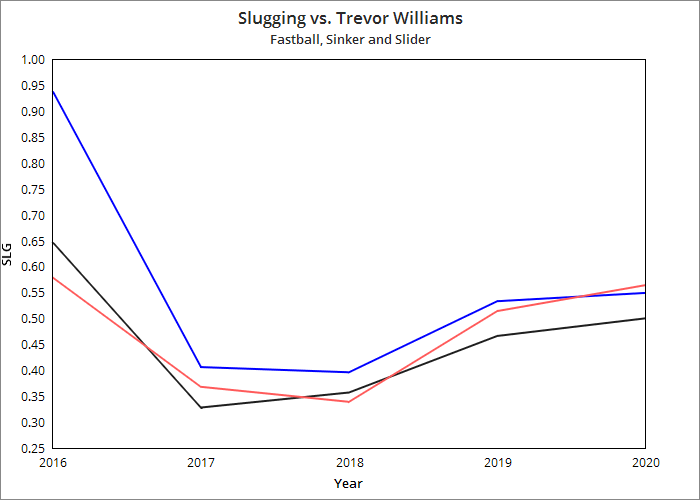 One possible difference is that, if you look at the diagrams at baseballsavant.com, Williams appears to be getting his four-seamer up in the zone more. 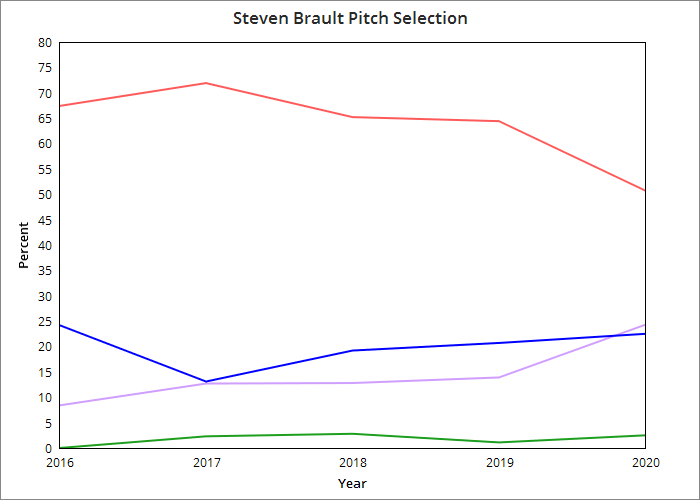 This is the usual pattern, except Brault switched to the change rather than a breaking ball.  That switch mainly, but not entirely, took full effect late in the short season, so it’ll be interesting to track this next year.  Here’s Brault’s pitch selection game-by-game this year: 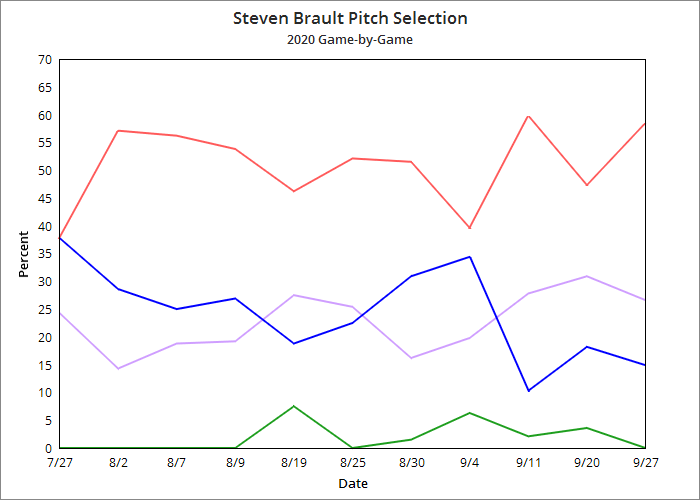 There were six games in which he went heavily with the change.  The last two, of course, were tremendous starts.  The September 11 start, in that awful Kansas City series, wasn’t good.  Brault’s first game of the season was two scoreless innings against the Brewers.  On August 19, he threw five scoreless, two-hit innings against Cleveland.  On the 25th, he had one of those Bad Brault games when he couldn’t throw strikes.  So the track record was a bit mixed, but when he was at his best, he was throwing the change a lot.  His ERA in those six starts was 2.40.  The broader lesson appears to be, Trust in the Jake.

(As an aside, this pic is on the internet: 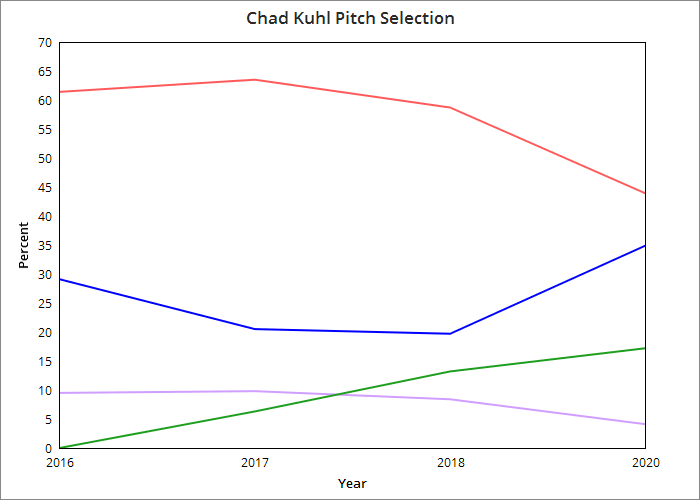 No 2019, of course, which may explain why we see an even sharper-than usual version of the common pattern.  Lots fewer fastballs, lots more sliders and a few more curves.  There’s also a steady downward drift in changeup usage.  That’s been the team’s general pattern for several years, although there’s a lot of variance between individuals.  As shown below, Kuhl has shifted from throwing sinkers exclusively to throwing some four-seamers, although neither has been an effective pitch.  (Four-seamer=red, sinker=orange.) 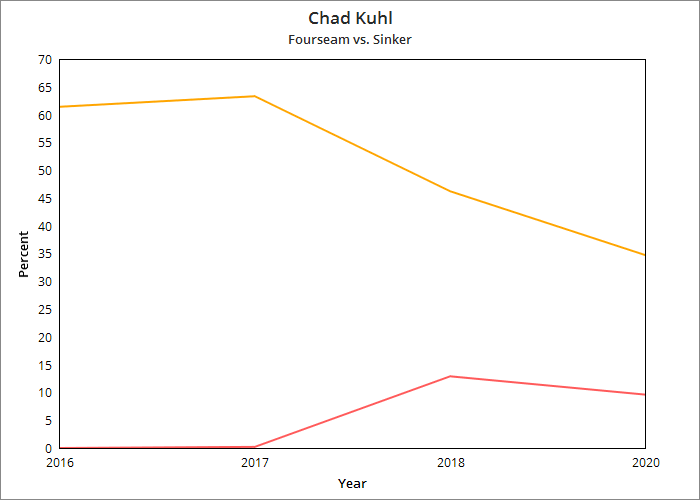 It’s hard to see much with this type of info for relievers.  They don’t throw many innings, they often throw just two pitches, and most of the Pirates’ relievers have very limited major league track records (or such bad ones that it’s hard to care what they’re throwing).  I wanted to put Rodriguez in here, though.  FanGraphs thinks his breaking ball is a slider, but I could swear it’s a curve (right?) and that’s what brooksbaseball thinks, so I’m going with curve.  I left out his change because he’s literally thrown only a handful.  I also left out his one year with Baltimore, which was just 5.2 IP. 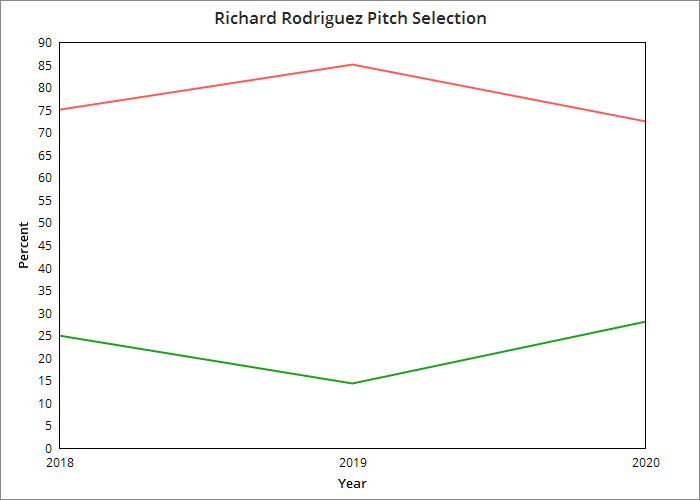 As we know, Rodriguez was excellent in 2018 and 2020, and shaky in 2019.  So I assume the Pirates have learned something, which bodes well going forward.

I wanted to throw Hartlieb in here, too, because he’s an interesting pitcher, although I can’t relax when he’s in a game.  These are, of course, very small sample sizes. 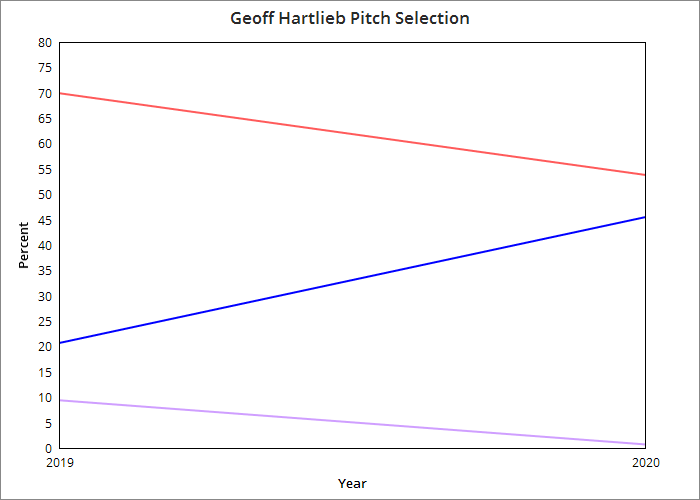 According to brooksbaseball, those fastballs in 2019 were split about halfway between four-seamers and sinkers.  In 2020 it was all sinkers, so he became exclusively sinker/slider.  Both pitches were hard to hit in 2020, but, oh, those bases on balls.  Hartlieb’s opponents’ slash line of 205/376/282 illustrates clearly where the damage came, and his BABIP of .254 only suggests a little luck.  Hartlieb is still inexperienced despite being almost 27.  It’d be nice to see him get a few more months in AAA.