It’s Monday afternoon, so it’s time to add another Pittsburgh Pirates baseball card to our Cardboard Bucs store.  This week is something new for this feature. All of the other Monday additions have been current prospects. Today we have a former top prospect who is featured on a 2020 Topps card. Jameson Taillon didn’t pitch during the 2020 season due to his second Tommy John surgery, but Topps still featured him in their set, and they picked an outstanding photo to use.

Here’s the front of the card

Most of the cards in the 2020 Topps set feature the standard photo you’re used to seeing over the years. The cards have a vertical format, meaning that they are taller than they are wider. However, the horizontal cards offer a better action shot in most cases and this card is no different. Taillon is following through after just releasing a pitch, with his back foot up in the air as high as the top of his head, as he looks on to see the result of his pitch. The photo here is what drew us into featuring it in our store. 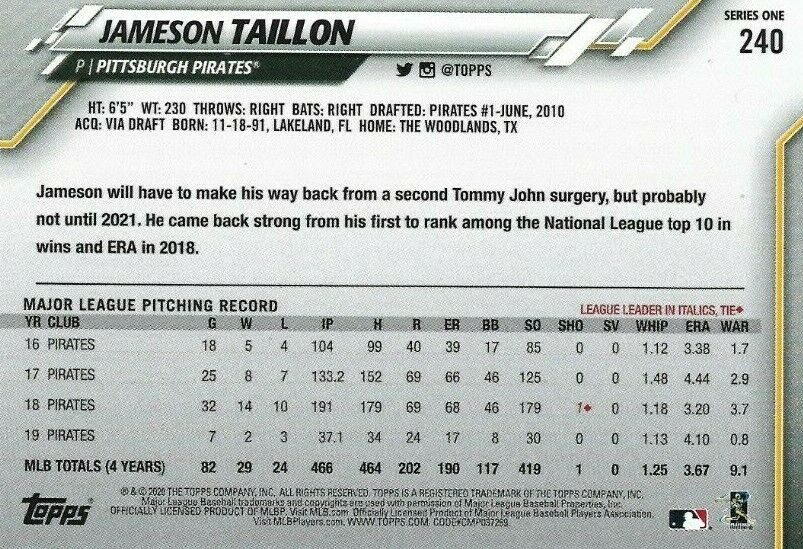 The back mentions Taillon’s second Tommy John surgery. Obviously we know now that he didn’t come back early from the surgery, but he was pushing to get into a game before the season ended. He probably could have pitched in a game at the end of the year because he was throwing to batters off of the mound in game-like situations in September. Taillon will be 100% to start Spring Training 2021 and the Pirates hope to get him back to that 2018 form you see in the stats line above.

One very interesting aspect on the 2020 Topps cards is the addition of WAR to the stats column. Over the years they have added certain statistical categories, but not much has really changed. Forty years ago, the backs had the same first 11 categories as seen above. ERA was also on all of the cards. The only difference over that time is that WHIP and WAR have replaced games started and complete games.

This card is available in limited quantity, with individual purchases also limited to five each. They are selling for $1 each. Basically it’s first come/first serve, and they could sell out quickly compared to other cards we have put up here. We also have plenty of top prospects still available. Last week we added Sammy Siani’s rookie card to our store. Before that it was a two-card drop featuring Jared Triolo and Matt Gorski. In the previous weeks, we added Brennan Malone and Quinn Priester rookies. We also have cards of Mitch Keller, Braxton Ashcraft, Calvin Mitchell, Will Craig and a limited amount of Ke’Bryan Hayes rookies in our store. Orders of $25 or more get free shipping using the code “CARDS”.

UPDATE: As a late addition this afternoon, we have added more 2020 Topps Pirates cards today. Here’s the list of players:

The Osuna and Brault cards are extremely limited, and there are just slightly more Williams and Musgrove cards available. The other cards are all in the same limited range as Taillon.