First Pitch: What is Development?

There are only seven homegrown players on the Tampa Bay Rays roster this year, per this breakdown on MLB.com. 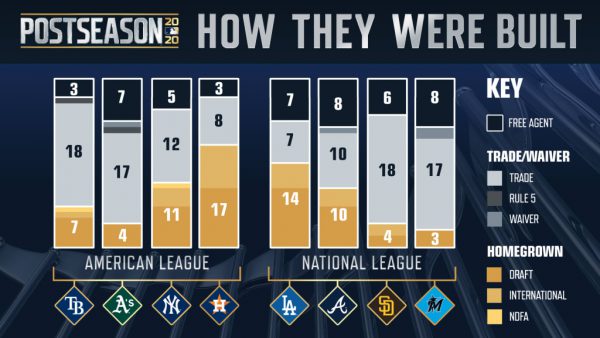 I point out often the importance of small market teams developing their own players. The irony here is that the biggest spenders in the playoffs this year have the most homegrown players, while the smaller markets have the most trades and waiver claims.

The above chart is a bit misleading in thinking that every player is equal. The seven homegrown players on the Rays’ roster represent 7.1 WAR this season. The 17 players added via trade represent 9 WAR. The Rays wouldn’t be where they are without homegrown guys like Brandon Lowe, Kevin Kiermaier, and Blake Snell.

On the flip side, the Yankees have more homegrown players, but those players make up 2.2 WAR, while their trades make up 7.3 WAR. The Yankees make up the difference with 5.9 WAR via free agency, where the Rays top out at 1.5 WAR.

The question to ask is this: What is a homegrown player?

The numbers above would classify Willy Adames as a trade addition. Adames was acquired in 2014 from the Tigers in the David Price trade. He was in A-ball at the time, and spent three and a half years in the minors with the Rays before making the majors. That’s after just over a year spent in the lower levels of Detroit’s system.

I would say that Adames is more homegrown than a trade acquisition, but that’s speaking more toward how he got to the majors with the Rays, and not how he arrived in the system.

But how long in the system do you have to be in order to be considered homegrown from a development standpoint?

I discussed Tyler Glasnow yesterday, and the lesson of how the Pirates sold low and didn’t give him an opportunity to start in 2018. The Rays added him at the trade deadline and immediately put him in the rotation. Their development going forward with him was less mechanical and more a mentality: Trust your stuff and attack hitters, rather than trying to force your stuff into a specific style of pitching.

As I pointed out yesterday, the approach has clearly worked for Glasnow, as he’s seen results with the Rays so far that Pirates fans were dreaming about while he was coming up through the system.

The dilemma here is that Glasnow was developed by the Pirates as a prospect. He went from a random tall, skinny pitcher throwing in the upper 80s to a physical specimen who could work in the upper 90s. But the minors are littered with players who can hit the upper 90s with their fastballs. It wasn’t until Glasnow got to the Rays that he was developed from a prospect to an MLB player.

This all raises the question: What is development? And is it just one stage?

The Pirates for years developed some of the best prospects in the game, only to see those guys struggle in the majors. That raised the question of whether they actually had good prospects to begin with, and that question only started getting answered when some of their best prospects started having their expected results elsewhere.

The Pirates were developing prospects, but couldn’t develop those prospects into MLB players.

Looking at the Rays, it seems that this is the thing they do best. It doesn’t matter where they get the prospects. What matters is that they can take those guys and make them better in the majors.

They can get Blake Snell from a top prospect to a top young starter in the game.

They can take a struggling Tyler Glasnow from another system and show him success that system couldn’t show him.

They can take someone like Nick Anderson, who looked like an average reliever with Miami, and turn him into an elite reliever while wiping out his control issues.

They can trade their best pitcher for a random guy in A-ball named Willy Adames and see him go on to be one of the best players on their major league team six years later.

If you think back to when the Pirates were at their best, they had this going for them. They were able to get something out of Gerrit Cole, even if they couldn’t quite get him to being the best pitcher in the game. They were able to take undervalued guys like Francisco Liriano, Russell Martin, and Edinson Volquez and get exceptional value from them. And they were able to take struggling relievers like Mark Melancon and elevate them to a higher level.

A lot of what worked for the Pirates disappeared when the league started rapidly changing pitching techniques in the process of adopting new technology. The Pirates fell behind and lost one of their key advantages from 2013-15. In that process, they lost the thing that helped them supplement what we commonly refer to as “homegrown” talent: They lost the ability to take players from other systems and make them better in Pittsburgh.

The 2020 Prospect Guide returns to print for our tenth  we are releasing three variant covers, featuring Mitch Keller and Ke’Bryan Hayes. Visit our shop page to order these extremely limited items!