Erik Gonzalez has been one of the highlights for the Pirates in this short season. That’s not saying much, considering the state of the 2020 Pirates.

Gonzalez is hitting for a .279/.305/.451 line, while providing positive defensive value at third base and shortstop. The biggest bright spot in his game has been the increase in power, with a .172 ISO.

When Gonzalez was acquired, Pirates’ General Manager at the time Neal Huntington compared him to Freddy Galvis. The comparison is pretty close if Gonzalez maintains his power.

Galvis also provides a lot of value at shortstop, with a career 2.8 UZR/150.

If the 2020 season from Gonzalez is to be believed, he’s already reached the Galvis comp. The problem here is that these are small sample sizes. I’d trust that the defense would remain strong, but the power hasn’t been consistent throughout his career.

Breaking down the numbers, Gonzalez has hit more line drives this year, with his 28.1% rate being the highest of his career. He’s also reduced his ground ball rate to 46.9%, which is the lowest of his career, down from a career 54.2% mark. His soft contact is down, and his hard contact is up, which typically happens when you trade ground balls for line drives.

Looking at his Statcast data, most of the advanced metrics are above average, justifying the current power production. 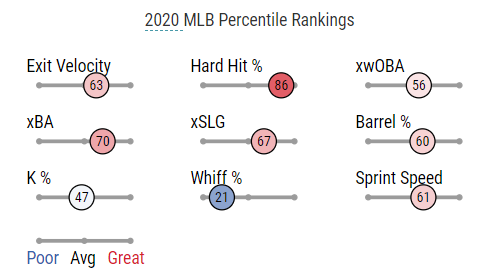 Again, this comes with a small sample size disclaimer.

The Pirates don’t need Gonzalez at third base with Ke’Bryan Hayes at the position. They have Kevin Newman and Cole Tucker as competition at shortstop, although Newman has taken a step back from his 2019 numbers, while Tucker has yet to hit in the majors, while being transitioned to the outfield, where his defense has been poor.

The shortstop position is open for Gonzalez to take for the long-term, and if he keeps up the Galvis-like performance, it should be his until someone comes along who can put up a 2+ WAR at the position.

Today’s discussion question: What future role do you project for Erik Gonzalez on the Pirates?