The Pirates hammered the Brewers, 12-5.  It was the first time they’ve won back-to-back games all year, and it was their first series win of the year.  They’re now 6-17.  That breaks down to 3-2 against the Brewers and 3-15 against everybody else.

Derek Holland had a solid start.  Not great; he walked three and took 99 pitches to get through five innings.  But he gave up only four hits.  Double plays in the first two innings helped.  Holland also wasted two leadoff doubles by Mark Mathias.  The only run was a fourth-inning bomb by Jedd Gyorko.

The Pirates teed off on a string of Brewers’ pitchers, starting in the first.  Colin Moran doubled in Adam Frazier, with the call on a close play actually going for the Pirates.

After Gyorko tied the game, the Pirates put up two runs in each inning from the fourth through the sixth.  The first two came when Gregory Polanco got extended on a pitch on the outside corner and blasted it out to right-center for his third home run of the year.  That followed a walk to Moran.  Leading off the next inning, Adam Frazier turned on a curve by left-hander Brent Suter and belted it out to right.  It was Frazier’s fourth.  Later in the inning, Moran and Bryan Reynolds hit back-to-back doubles.  In the sixth, after J.T. Riddle reached on an error, Jacob Stallings hit one over the notch, his first of the year.

The Pirates’ bullpen continued its ups and downs.  Tyler Bashlor, pitching on consecutive days, had a quick inning, with a hit batsman and two strikeouts, both on sliders.  Dovydas Neverauskas didn’t do so well, giving up a three-run dinger on a badly located fastball to Keston Hiura.  That was in the top of the seventh and made it 7-4.

The Pirates got that back in more in the bottom half.  Moran led off with his third double of the game, then three walks, the last to Stallings, forced in a run.  A single by Erik Gonzalez and a double by Frazier brought in four more to make it 12-4.

The bullpen continued the uneven performance.  Chris Stratton had an easy eighth.  In the ninth, Nick Mears looked like a guy who’d thrown only a handful of pitches above class A before this year, which he is.  He gave up a run on a double and three walks, and threw only 14 of 32 pitches for strikes, but left the bases loaded with only one run in.

For the game, lots of guys continued getting well.  Frazier had three hits and three RBIs, and missed a cycle by a triple.  Moran had the three doubles and three runs.  Polanco had a double and the homer, and is now over the Dyson line.  Reynolds had two hits.  Stallings was 2-for-3 with three RBIs, and is now batting .317 with an .817 OPS.  The Pirates continued evaluating J.T. Riddle to see whether he’s really 22 instead of 28 (I’d just check his drivers license, but I’m funny that way), and he failed to get two runners in from third with one out.  Gonzalez is now 2-for-14 as a leadoff hitter and his OPS is down to .694. 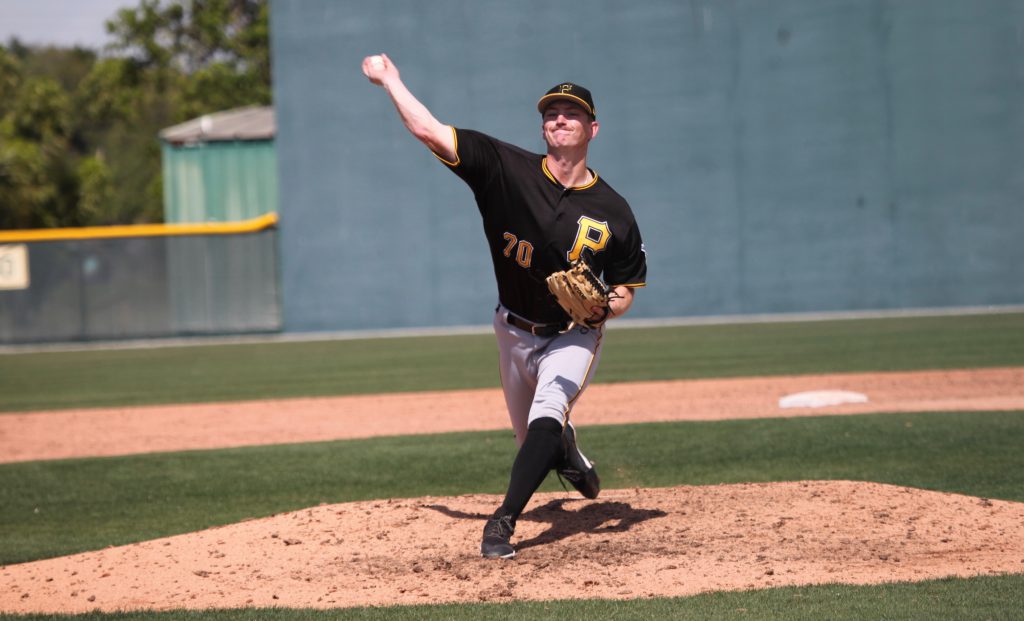 First Pitch: Should the Pirates Trade Players at Lower Values This Offseason?

OOTP: The Simulated Season Continues as the Pirates Take on the Reds

First Pitch: A Future Infield You Can Build A Contender Around