In yesterday’s simulation, Kevin Kramer went down with an injury, putting him out for a month. Today, the OOTPirates purchased the contract of Jose Osuna to replace Kramer.

And there was much rejoicing. 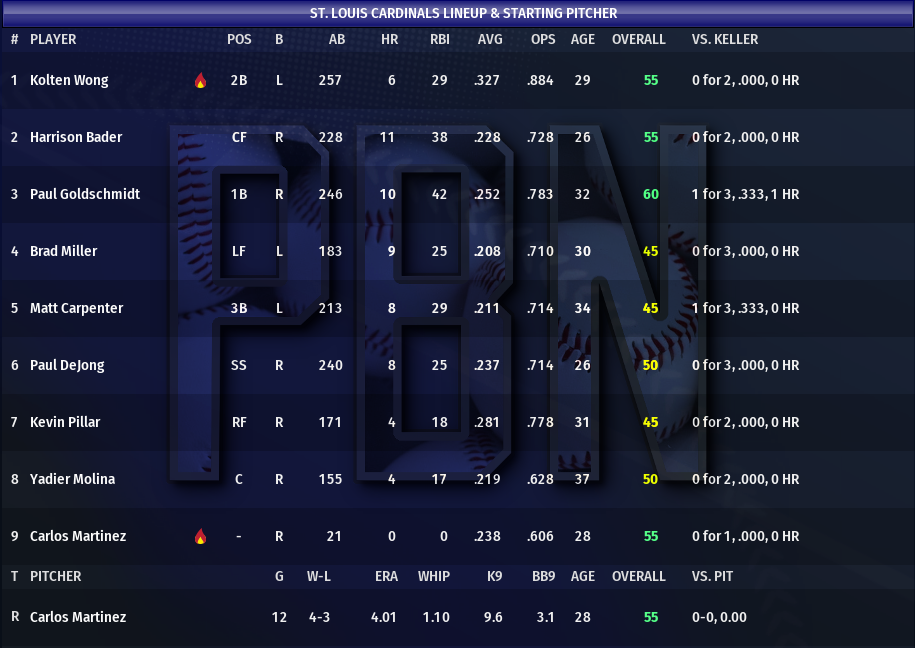 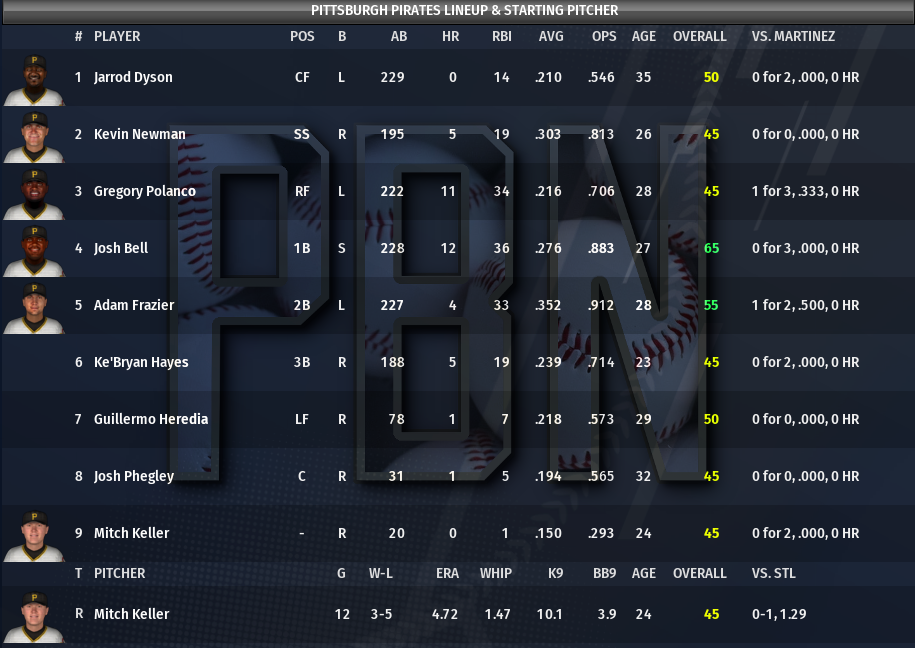 Dyson grounded out to short. Newman struck out. Polanco popped out to second.

Bell struck out. Frazier walked. Hayes singled on a line drive to right-center, moving Frazier to third. Guillermo Heredia was hit with a pitch, loading the bases. Josh Phegley struck out. Keller struck out.

Molina walked. Martinez struck out. Wong grounded into a 5-4 fielder’s choice. Wong moved to second on a wild pitch. Bader struck out.

Carlos Martinez retired the top of the lineup in order on six pitches.

Goldschmidt grounded out to second. Brad Miller tripled on a fly ball to right-center. Carpenter struck out. DeJong struck out.

Josh Bell led off the fourth with a solo home run to right. Frazier grounded out to third. Hayes flew out to left. Heredia struck out.

Keller retired the side in order, striking out Martinez for the third out.

Wong flew out to left. Bader grounded out back to the mound. Goldschmidt struck out.

Bell led off with a double down the first base line. Frazier singled in a line drive to left-center, with Bell moving to third. John Brebbia comes on to pitch for the Cardinals. Hayes struck out. Heredia popped out to second. Phegley flew out to right.

Miller led off with a line drive single to right. Matt Carpenter drew an 11 pitch walk. Michael Feliz came on in relief. DeJong struck out. Kevin Pillar grounded into a 6-4-3 double play.

Jose Osuna entered the game as a pinch hitter and hit a solo homer to left field. Dyson struck out. Newman grounded out to second. Tony Barnette comes in to pitch for the Cardinals. Polanco hit a solo homer to right-center. Bell flew out to shallow left.

Keone Kela takes over for Feliz. Molina strikes out. Dexter Fowler enters as a pinch hitter and grounds out back to the mound. Wong hits a solo homer to right. Bader strikes out.

Andrew Miller enters in relief for the Cardinals. Frazier reaches on an error by the pitcher. Hayes tried to bunt him over, but a throwing error by the catcher allowed Hayes to move to second, and allowed Frazier to score from first. A balk moved Hayes to third. Heredia struck out. Phegley singled past the shortstop, scoring Hayes. Bryan Reynolds entered as a pinch hitter and hit into a 4-6-3 double play.

Richard Rodriguez takes over for the Pirates. Goldschmidt leads off with a solo homer. Miller grounds out to second. Carpenter strikes out. DeJong singles to center. Nick Burdi comes in and gets Pillar to ground into a fielder’s choice at second to get the easy save. 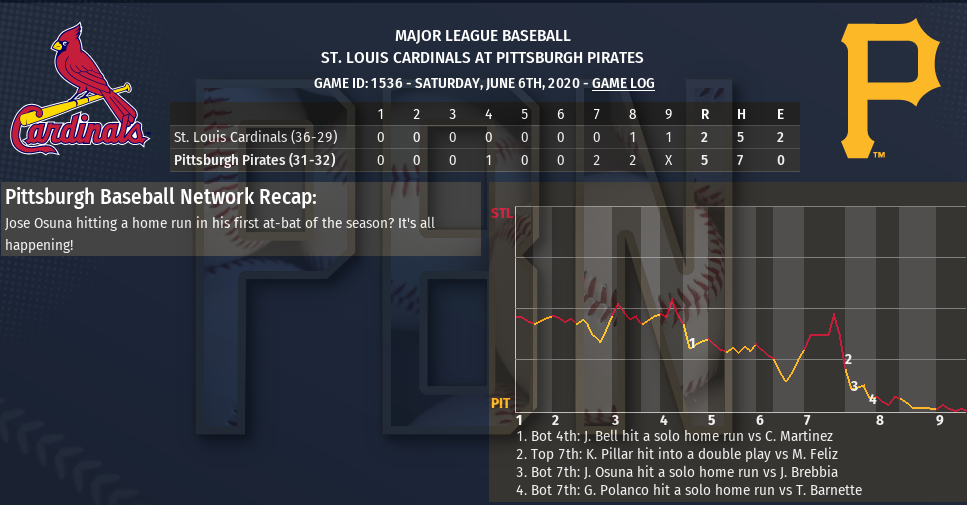 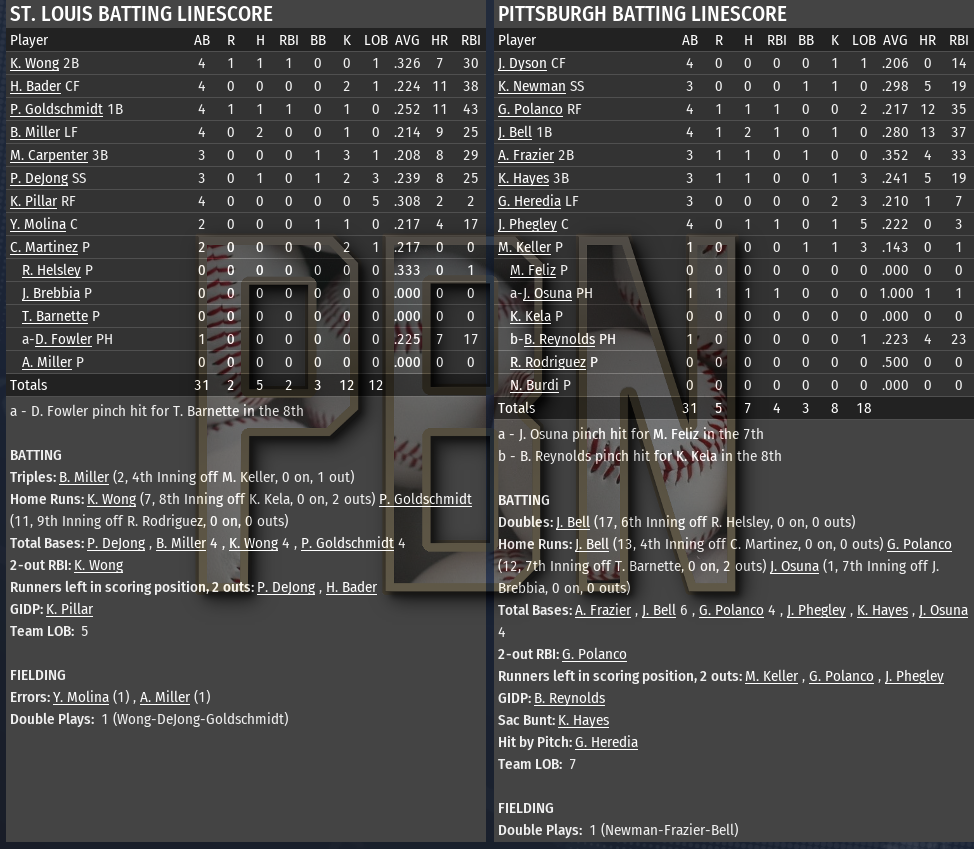 Kramer suffered a strained lat and will be out for a month. 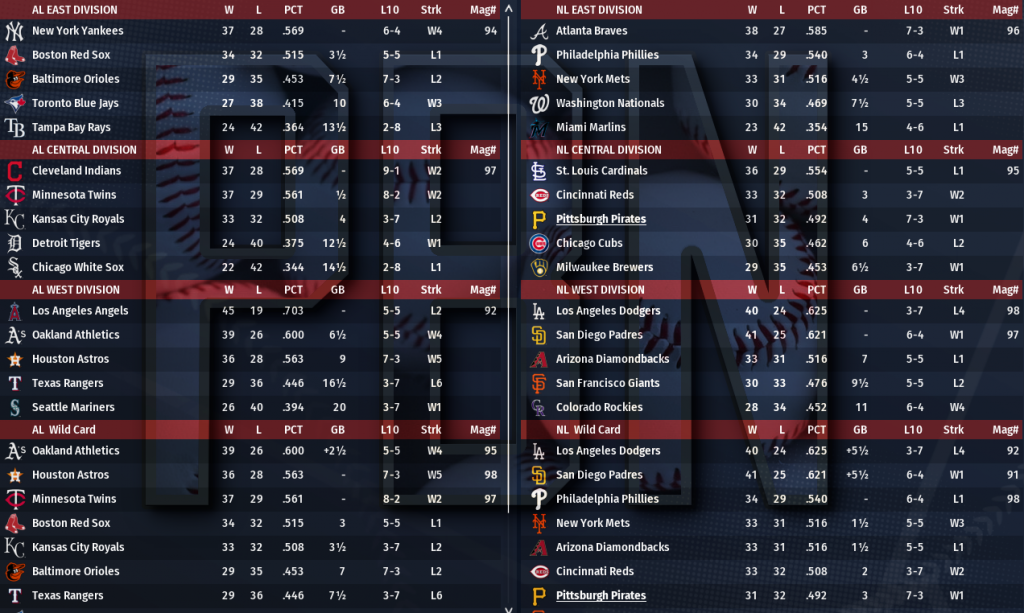 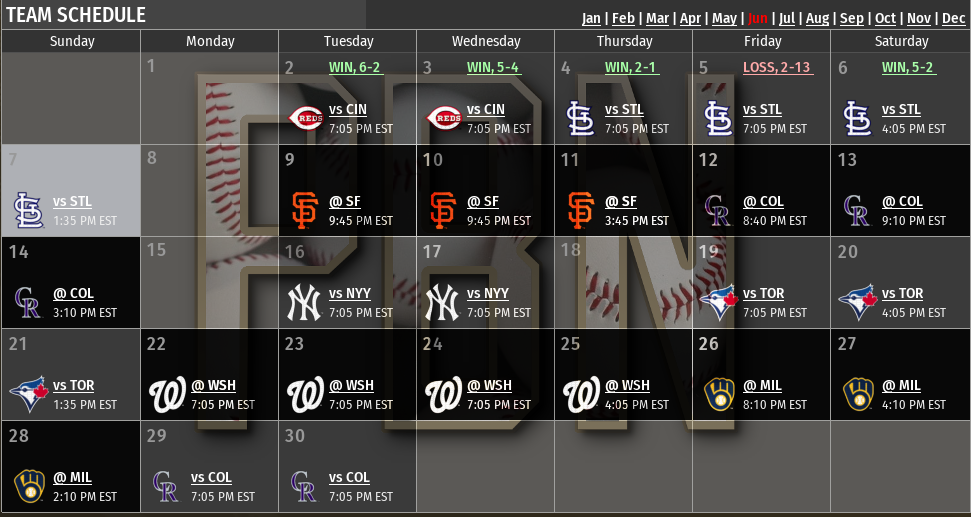 **This was the normal schedule. After writing this up, I simmed ahead and Sunday’s game was postponed due to weather. The next game is Tuesday, when the Pirates will try again to climb back to .500. If all goes as expected, that will be the first OOTP sim to run on PBN.