OOTP: Pirates Go For the Sweep Today Against the Reds

The Pirates will go for the sweep today against the Reds, with Trevor Williams on the mound.

Prior to the game, the team made some moves. They had claimed catcher Josh Phegley off waivers from the Cubs after yesterday’s game. He was added to the active roster, and Luke Maile was optioned to Triple-A. Maile had a .204/.277/.315 line so far this year with the Pirates.

They also optioned Brandon Waddell and recalled Blake Weiman, along with optioning Kevin Kramer and bringing up Jason Martin. 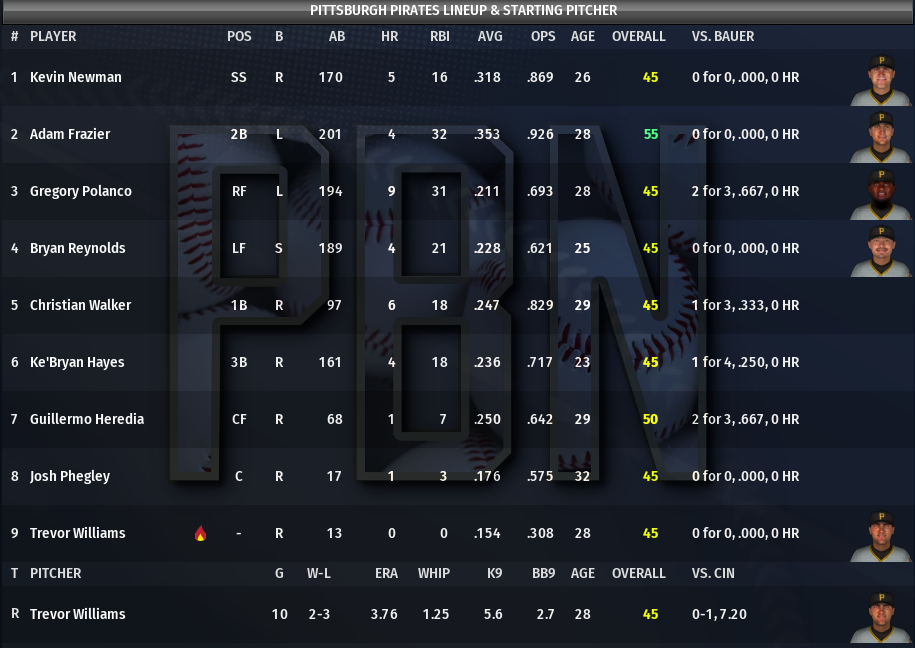 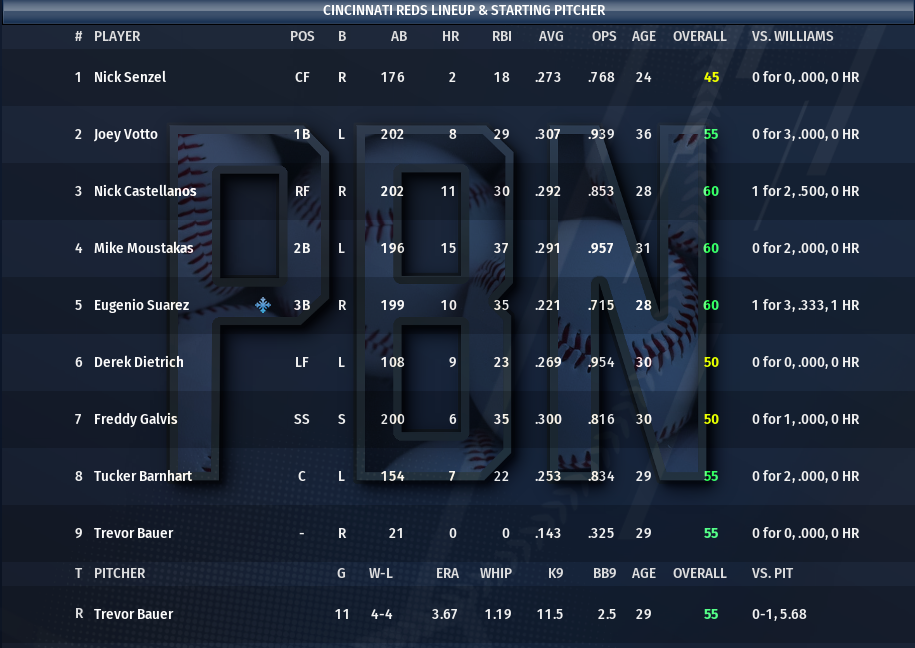 Newman grounds out to third. Frazier lines out to first. Polanco flies out to right.

Senzel singles on a line drive to center. Votto pops out to third. Castellanos flies out to center. Moustakas singles to right, with Senzel moving to third. Suarez grounds into a fielder’s choice at second.

Reynolds leads off the second with a walk. Christian Walker draws a walk. Hayes flies out to right, with Reynolds tagging and advancing to third. Heredia draws a walk, loading the bases. Phegley strikes out. Williams strikes out.

Dietrich flies out to left. Galvis and Barnhart strike out.

Walker flies out to center. Hayes grounds out to third. Heredia strikes out.

Barnhart lines out to short. Bauer strikes out. Senzel triples to right-center. Votto singles on a line drive past the second baseman, scoring Senzel. Castellanos flies out to center.

Bauer retires the side in order, picking up two strikeouts.

Kyle Crick enters the game to replace Williams. Moustakas strikes out. Suarez strikes out. Dietrich is hit by a pitch. Galvis triples down the first base line, scoring Dietrich. Josh VanMeter enters as a pinch runner at third. Barnhart is intentionally walked. Mark Payton enters as a pinch hitter and draws a walk to load the bases. Edgar Santana enters the game for the Pirates. Senzel pops out to second.

Robert Stephenson enters the game for the Reds. Christian Colon enters at shortstop. Frazier singles to center. Polanco flies out to center. Reynolds grounds into a 4-6-3 double play.

Walker flies out to right. Hayes flies out to left. Heredia reaches on an error by the third baseman. Pedro Strop enters the game and strikes out Phegley.

Josh Bell enters the game as a pinch hitter and singles on a line drive to right. Amir Garrett enters the game for the Reds. Newman grounds into a 6-4-3 double play. Frazier strikes out.

Nick Burdi enters the game for the Pirates. Jesse Winker enters as a pinch hitter and singles to center. Senzel tries to sacrifice him over with a bunt, but Burdi gets the lead runner at second. Votto singles to left, putting runners on first and second. Castellanos strikes out. Moustakas strikes out. Burdi hurt his calf on the final play. 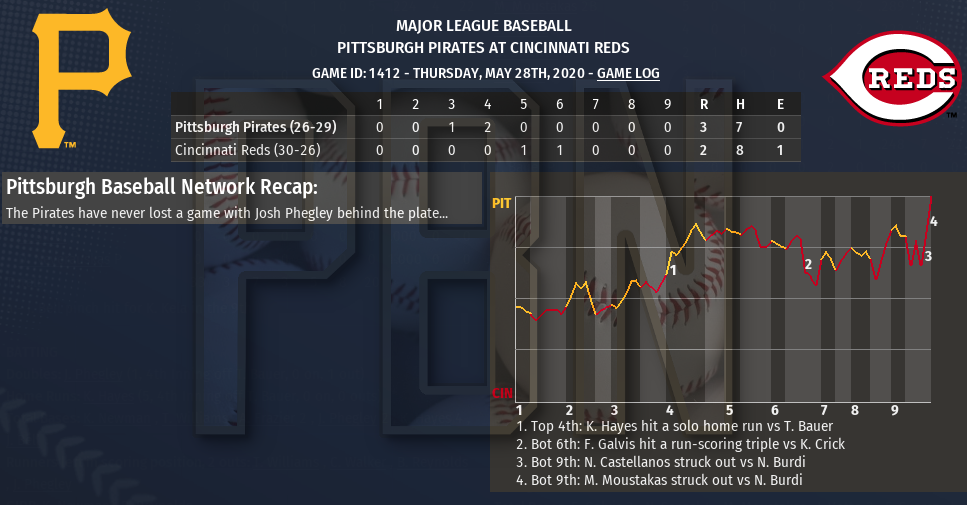 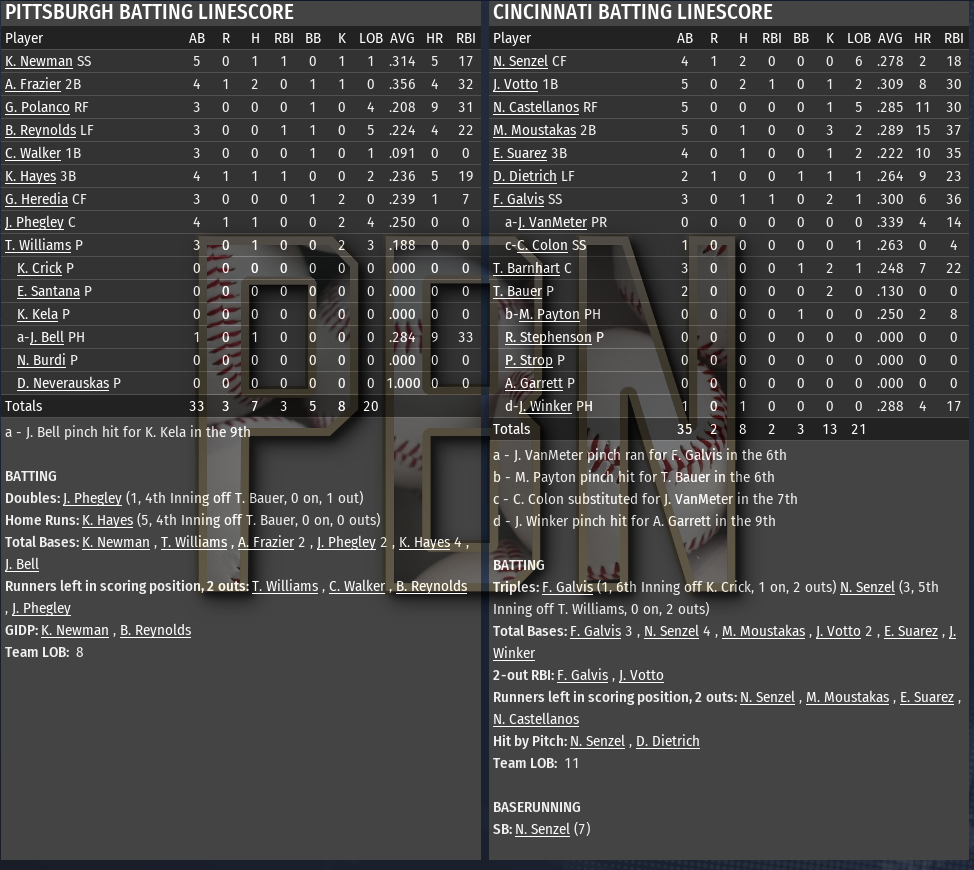 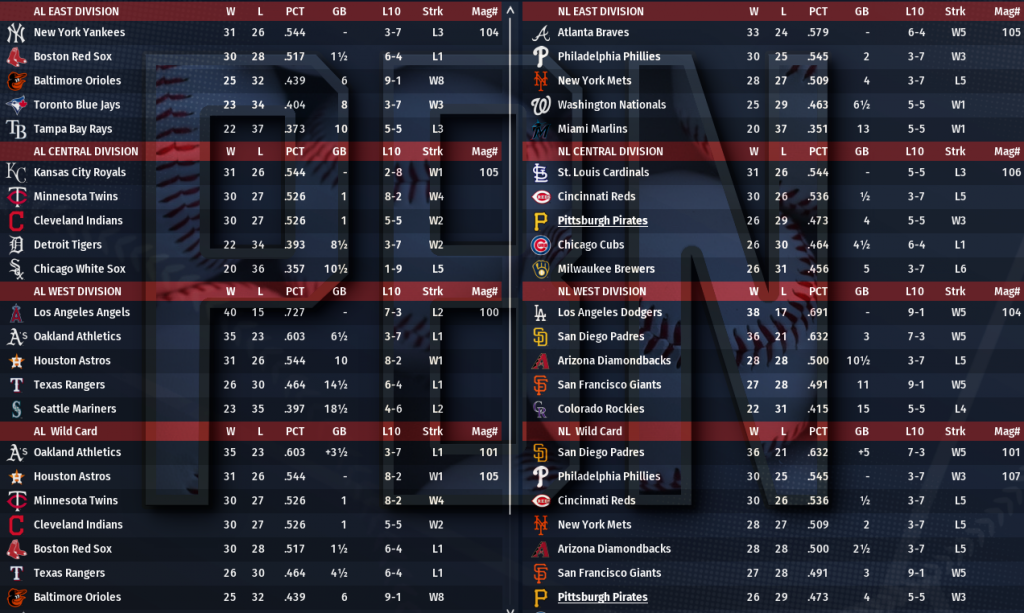 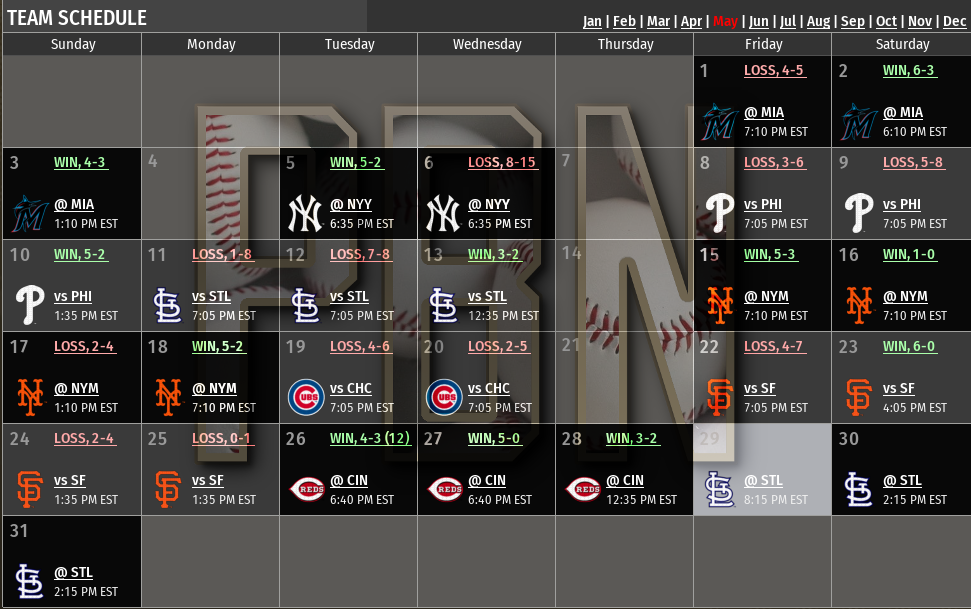