Chris Stratton will take his recent hot streak into today’s game against the Giants, going up against Tyler Anderson, who is making his season debut. 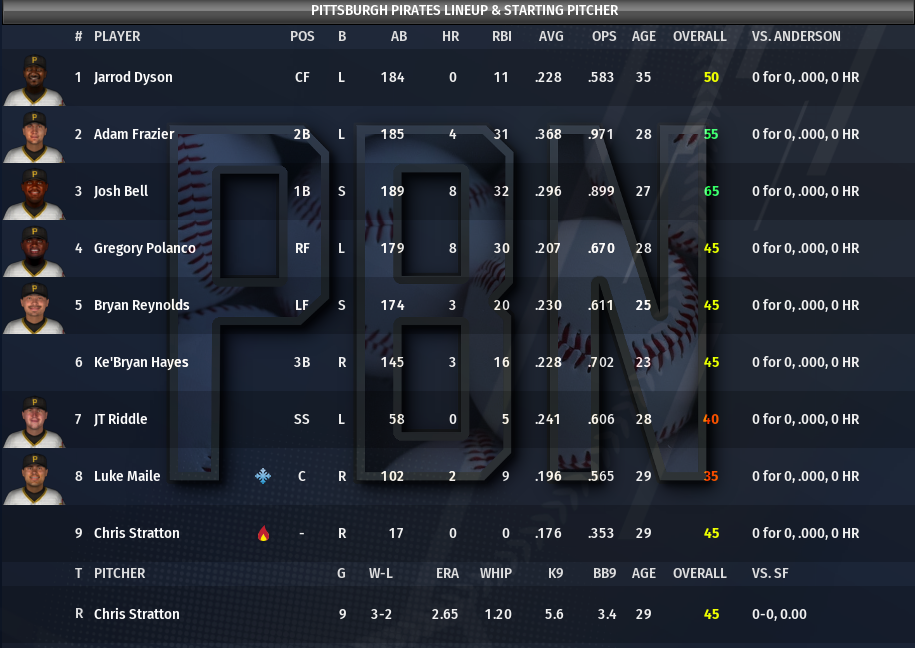 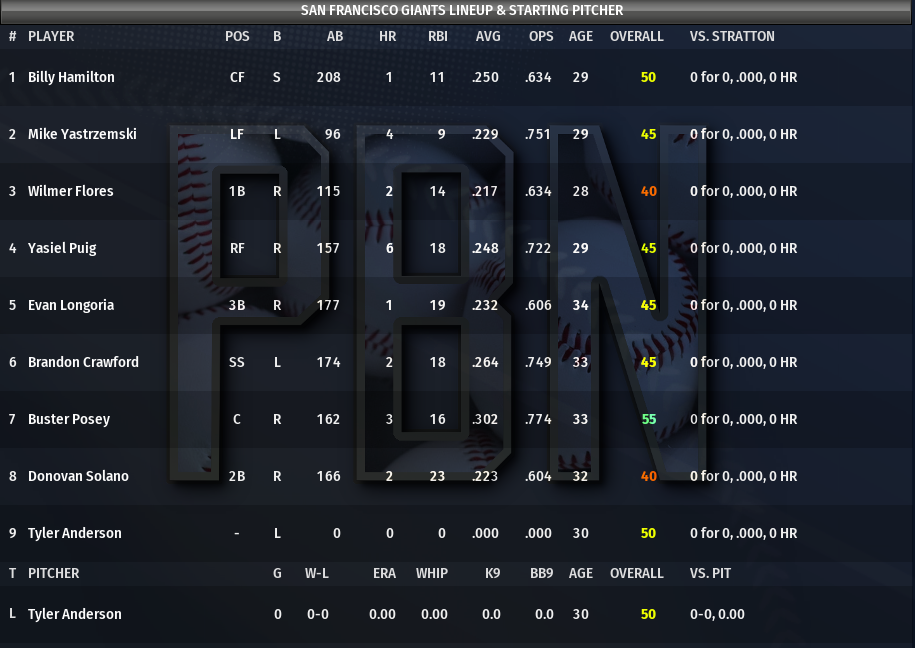 Hamilton walked. Yastrzemski grounded into a 3-6 fielder’s choice. Flores lined out to first. Puig doubled on a line drive to center, scoring a run. Longoria flew out to left.

Dyson struck out. Frazier grounded out to second. Bell flew out to center.

Polanco singled on a line drive past the second baseman. Reynolds grounded into a 4-6-3 double play. Hayes struck out.

Stratton retired the Giants in order, getting a strikeout against Longoria in the process.

Stratton retired the Giants in order, getting a strikeout against Posey.

Josh Bell led off the bottom of the fourth by taking a 3-2 pitch 400 feet to left for a solo homer. Polanco grounded out to the pitcher. Reynolds singled on a line drive to right. Hayes grounded into a 1-6 fielder’s choice. Riddle flew out to right.

Stratton retired the Giants in order, striking out two.

Maile singled on a grounder past the shortstop. Stratton bunted him over to second. Dyson flew out to center. Frazier grounded out to third.

Flores led off with a single. Puig struck out. Longoria walked. Crawford singled on a hard grounder, scoring a run. Posey flew out to center. Blake Weiman came on in relief. Solano flew out to right.

Bell flew out to right. Polanco doubled to right-center. Reynolds grounded out to first. Hayes struck out.

Anderson doubled on a line drive to right. Hamilton grounded out to third. Yastrzemski struck out. Flores was intentionally walked. Puig grounded into a 6-4 fielder’s choice.

Riddle singled on a line drive to right. Maile grounded into a 5-4-3 double play. Heredia entered as a pinch hitter and struck out.

Keone Kela enters the game for the Pirates. He strikes out the side, setting down Longoria, Crawford, and Posey.

Tyler Anderson remains in the game for the eighth inning, and sets Dyson, Frazier, and Bell down on three pitches, with a groundout and two fly outs.

Logan Webb enters for the Giants. Polanco draws a walk. Reynolds draws a walk, putting the tying run on base. Hayes strikes out. Riddle flies out to left. Maile strikes out. 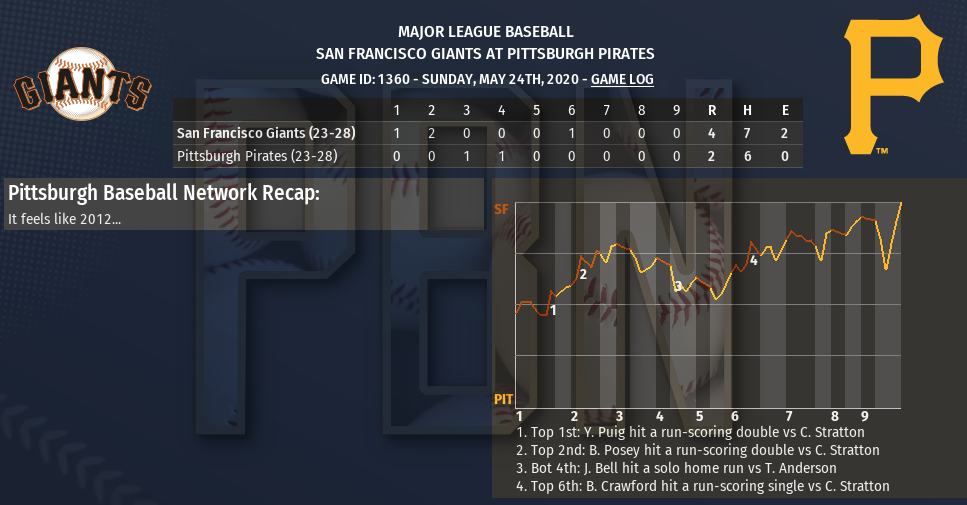 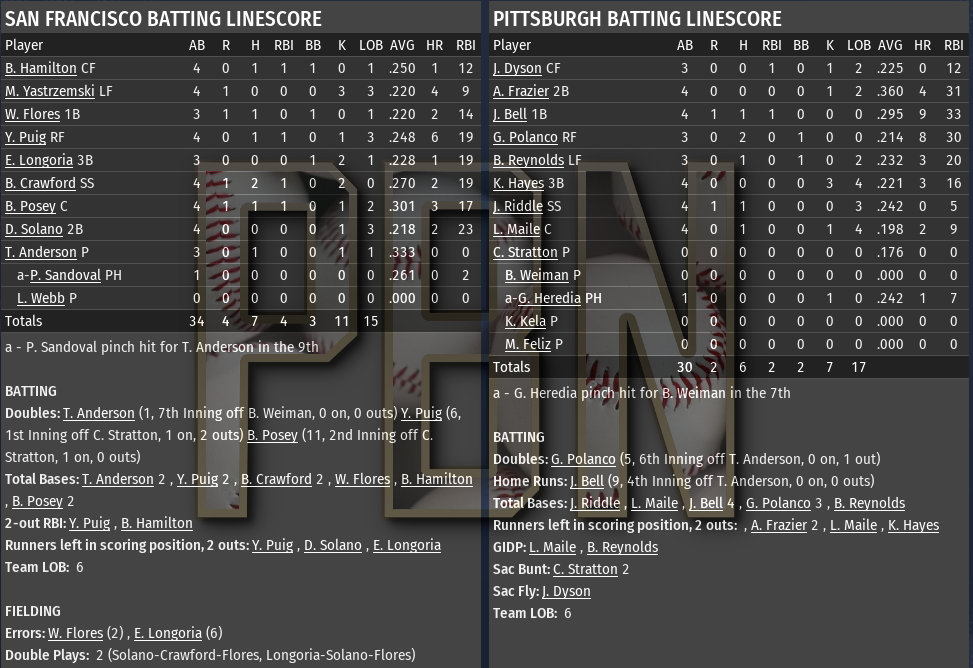 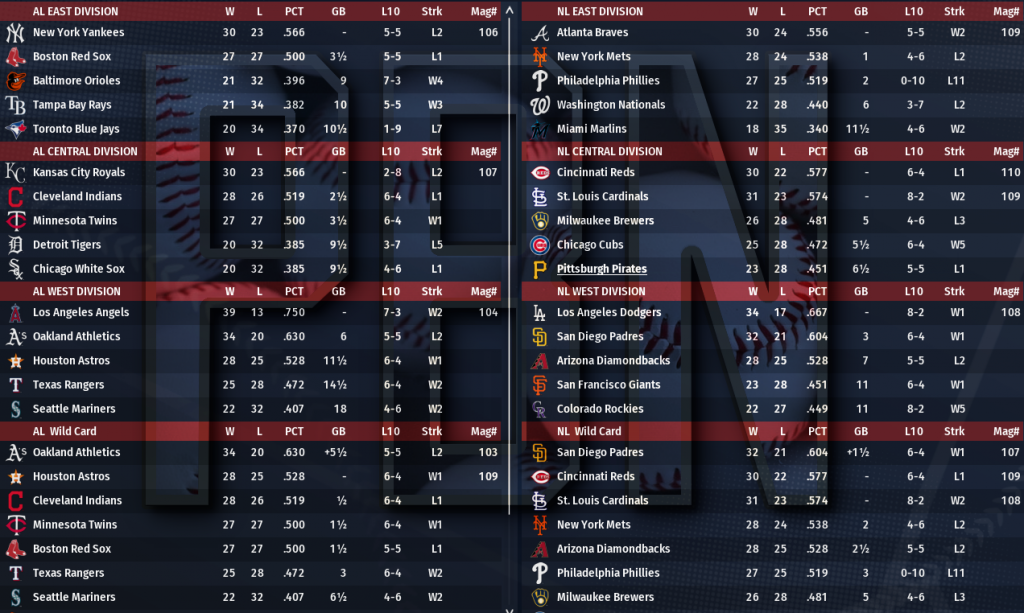 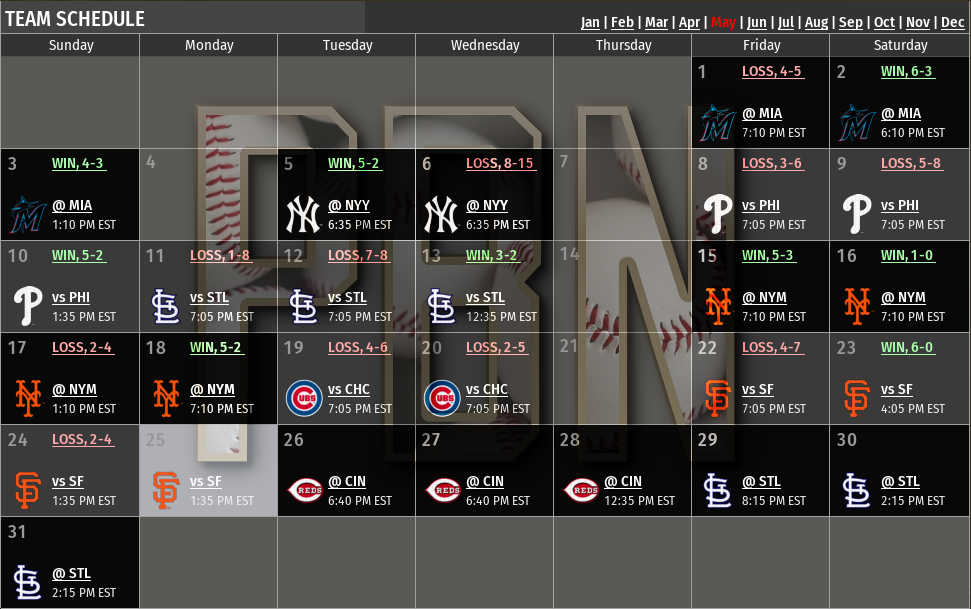