OOTP: Pirates Try to Close Out Series Against the Mets With a Win

The Pirates have won two of three so far in this series against the Mets, and will play the final game tonight with Trevor Williams going up against Rick Porcello. 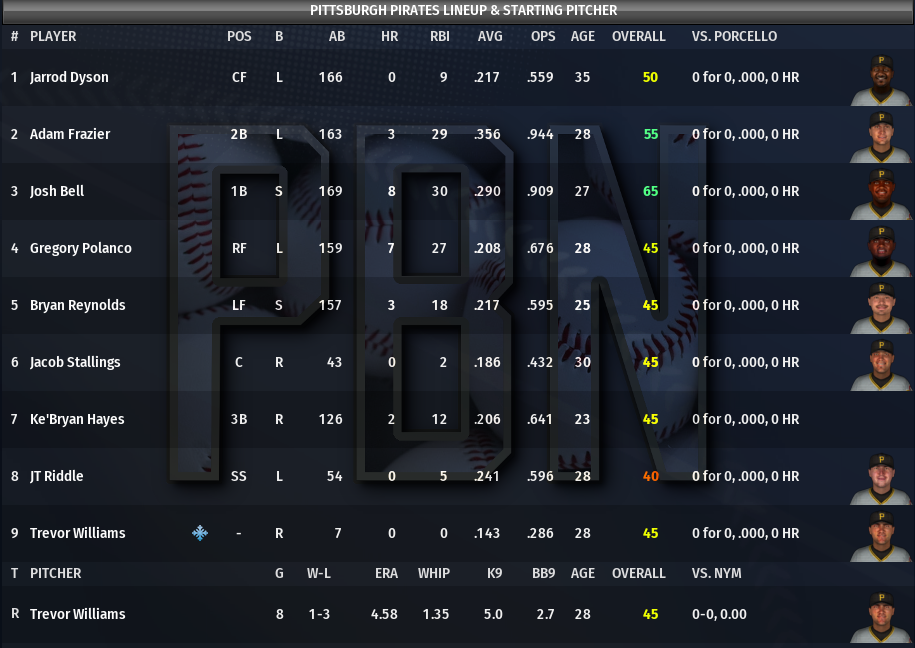 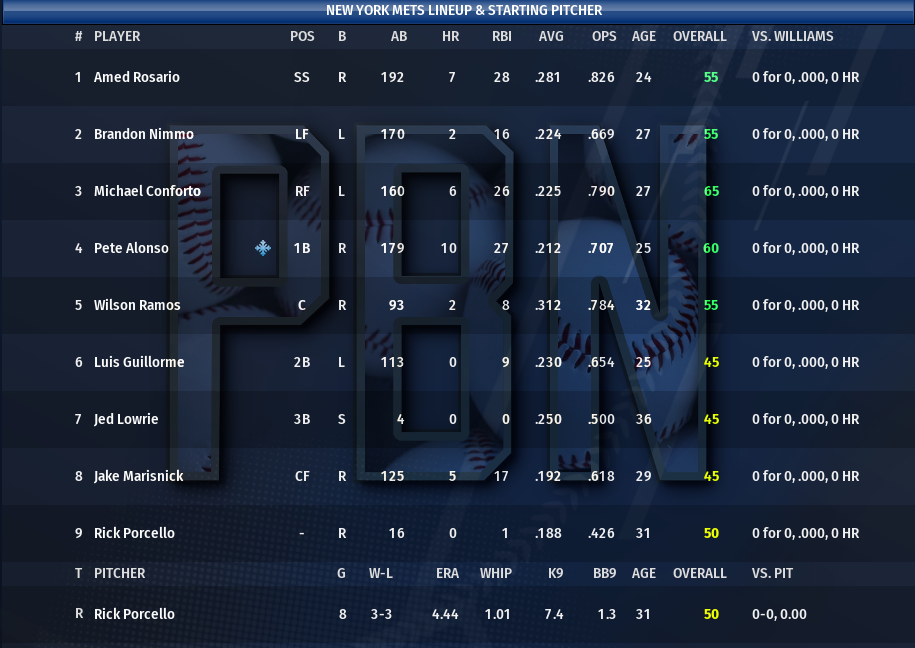 Williams gets Rosario to ground out to short to start the bottom half of the inning. Nimmo strikes out. Conforto grounds out to second.

Reynolds singles on a ground ball past the shortstop. Stallings grounds into a 6-4 fielder’s choice. A wild pitch moves Stallings to second. Hayes singles between the hole on the left side, scoring Stallings. Riddle and Williams strike out.

Alonso doubles on a line drive to right-center. Ramos pops out to third. Guillorme singles, moving Alonso to third. Williams strikes out Lowrie and gets Marisnick to ground out to second.

Porcello flies out to left. Rosario grounds out to third. Nimmo draws a walk. Conforto hits a two-run homer to left-center. Alonso flies out to right.

Hayes draws a walk. Riddle doubles to center, with Hayes moving to third. Williams strikes out. Dyson flies out to center. Hayes tags to score, but is thrown out at the plate.

Porcello strikes out. Rosario singles. A wild pitch moves Rosario to second, and he moves to third on a groundout by Nimmo. Conforto is intentionally walked. Alonso flies out to right.

Ramos grounds out to short. Richard Rodriguez enters in relief. Guillorme doubles to center. J.D. Davis replaces him as a pinch runner at second. Lowrie is intentionally walked. Marisnick grounds out, moving the runners up. Porcello strikes out.

Robinson Cano enters the game at second base. Hayes flies out to right. Riddle grounds out to second. Kevin Kramer enters as a pinch hitter and pops out to first.

Michael Feliz enters in relief for the Pirates. He strikes out Rosario and Nimmo, then gets Conforto to ground out back to the mound.

Dyson grounds out. Frazier singles through the left side. Bell flies out to center. Seth Lugo enters in relief for the Mets. Polanco draws a walk. Reynolds singles to right. An error by the right fielder allows Frazier to score the tying run, and puts runners at second and third. Jacob Stallings hits a three run homer to left-center. The ball went 410 feet with a 110.6 MPH exit velocity. Jeurys Familia enters the game and strikes out Hayes.

Riddle grounds out to short. Christian Walker enters as a pinch hitter and strikes out. Dyson grounds out.

Nick Burdi enters the game. Jed Lowrie doubles to left-center. Marisnick strikes out. Dominic Smith enters as a pinch hitter and strikes out. Keone Kela comes on for another vulture save and gets Rosario to pop out to end the game. 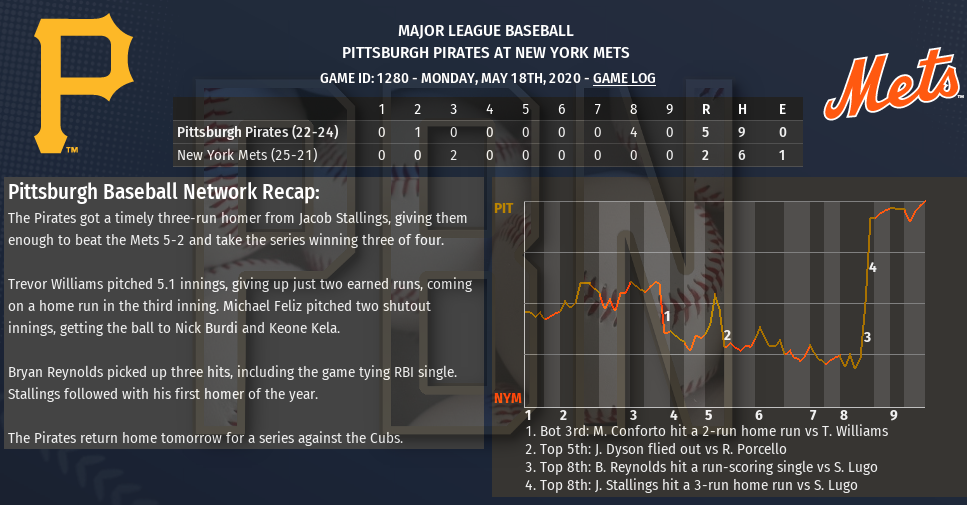 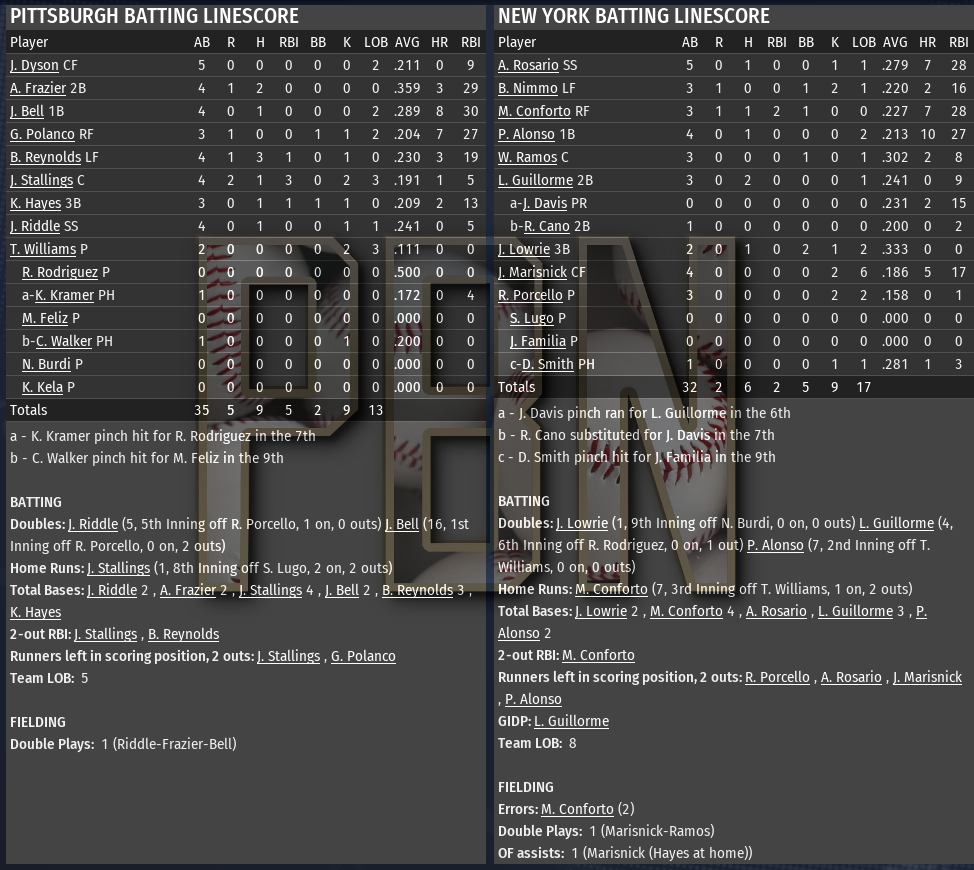 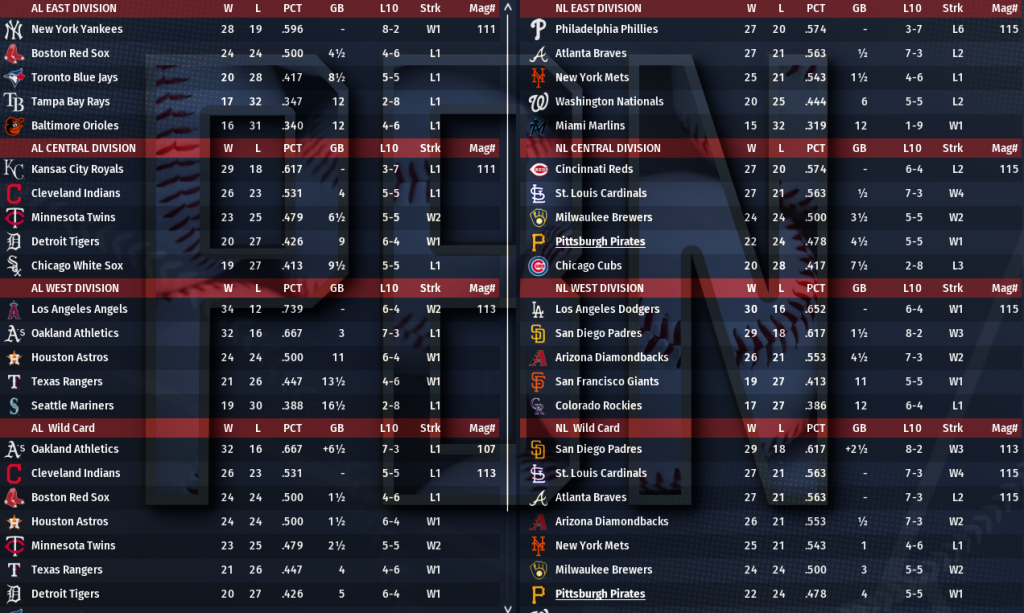 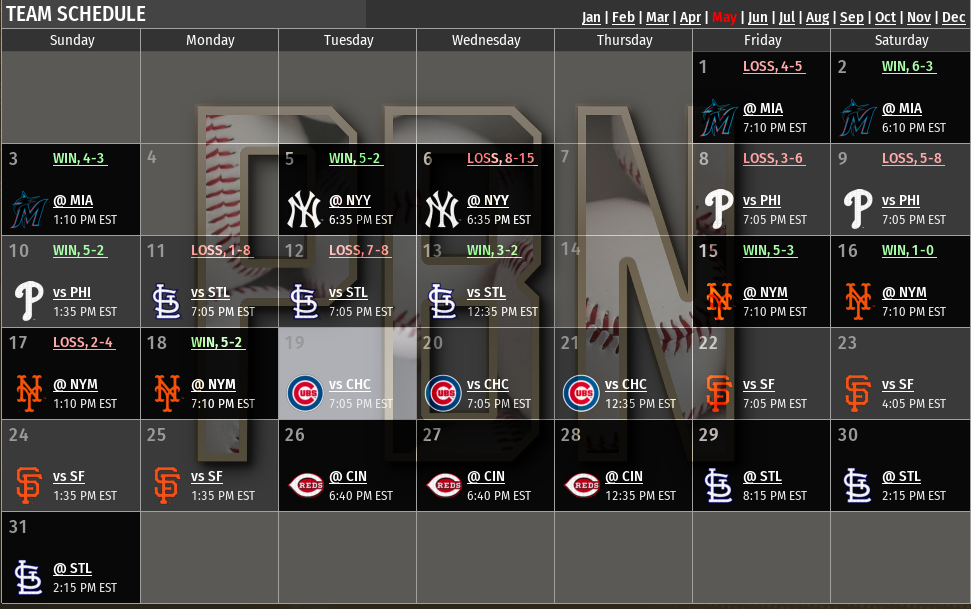