OOTP: Pirates Claim a First Baseman, Send Archer to the Mound vs the Mets

We’ve got some OOTP universe transactions to cover before today’s game. The biggest is that the OOTPirates have claimed first baseman Christian Walker off waivers from the Diamondbacks. Walker had a .258/.333/.528 line with Arizona this year, along with six homers. This is a move that definitely wouldn’t have happened this way in real life, even though Jake Lamb is performing better for Arizona right now. Walker was designated for assignment to make room for Ketel Marte coming off the IL.

To clear a spot on the 40-man roster, John Ryan Murphy was designated for assignment and placed on waivers. Andrew Susac, who was waived earlier in the week, has cleared waivers and was outrighted to Triple-A. Jacob Stallings has been activated from the IL after being out for a month with a concussion.

Down in the minors, Travis Swaggerty was placed on the IL with a strained oblique. He’ll be out for six weeks. Swaggerty had a .280/.359/.448 line with six homers in Altoona so far this year.

The Pirates also shuffled their rotation, moving Chris Archer up a day to make tonight’s start against Jacob deGrom. 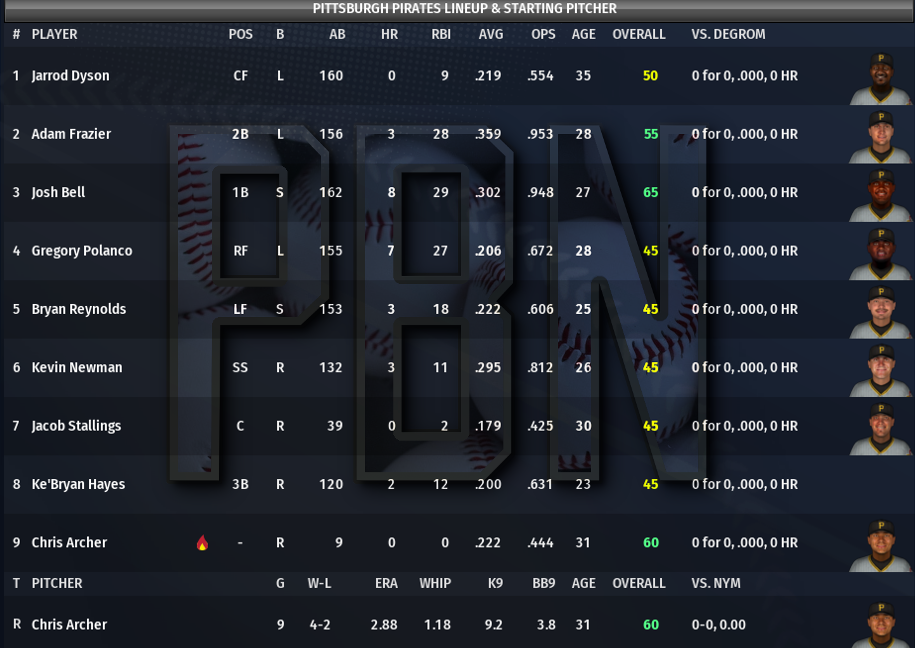 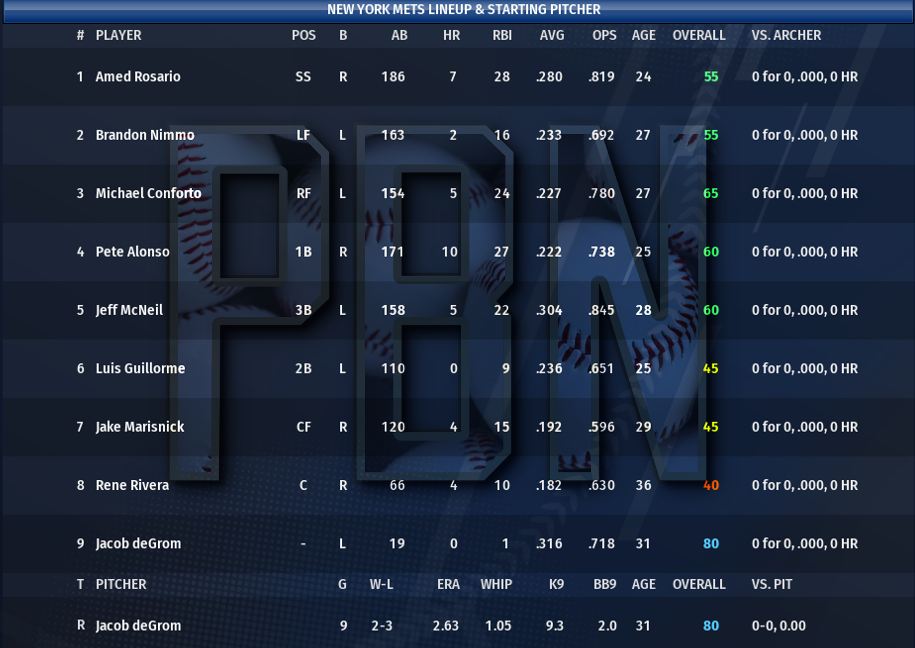 Dyson grounds out on a bunt attempt. Frazier singles through the left side of the infield. Bell flies out to right. Polanco flies out to center.

Rosario leads off the bottom of the first with a double to right. Nimmo strikes out. Conforto draws a walk on four pitches. Conforto is caught stealing second as Rosario steals third. Alonso strikes out.

Reynolds strikes out. Newman grounds out on a bunt attempt. Stallings flies out to left.

Hayes singles through the hole on the right side. Archer bunts him into scoring position with a sacrifice. Dyson singles in the infield, with Hayes moving to third. Frazier pops out to first. Bell flies out to center.

Archer retires the Mets in order, picking up one strikeout along the way.

Polanco flies out to center. Reynolds strikes out. Newman singles. He steals second with Stallings at the plate. Stallings grounds out to third.

Alonso strikes out on three pitches. McNeil singles on a line drive to right. Guillorme walks. Marisnick grounds into a 5-4-3 double play.

Hayes doubles on a line drive to left. Archer sacrifices him to third with a bunt. Dyson strikes out. Frazier pops out to short.

Rivera grounds out to short. deGrom flies out to center. Rosario singles up the middle. Nimmo flies out to right.

Bell grounds out back to the mound. Polanco singles to right. Reynolds flies out to center. Newman grounds out to second.

Conforto strikes out. Alonso flies out to left. McNeil triples on a line drive to left-center. Guillorme is intentionally walked. Marisnick grounds out to third.

DeGrom strikes out Stallings and Hayes, and gets Archer to fly out to center.

Archer gets Rivera to fly out to right, then strikes out deGrom and Rosario.

Dyson reaches on an error by the shortstop on a booted ground ball. A wild pickoff throw to first allows Dyson to move to second. Frazier doubles on a line drive to left-center, scoring Dyson. Bell grounds out to short. Polanco grounds out to second, with Frazier moving to third. Reynolds flies out to center.

Newman singles. Robert Gsellman enters to replace deGrom. Stallings singles, moving Newman to second. Hayes grounds into a 6-4 fielder’s choice. Moran enters as a pinch hitter and strikes out. Daniel Zamora comes in to face the top of the order. Dyson walks, moving Hayes to second. Frazier grounds out to second. 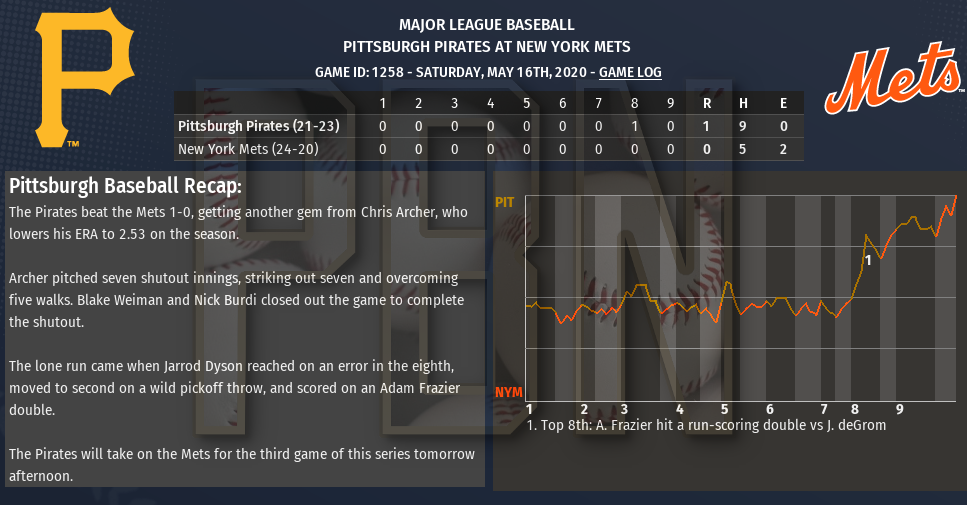 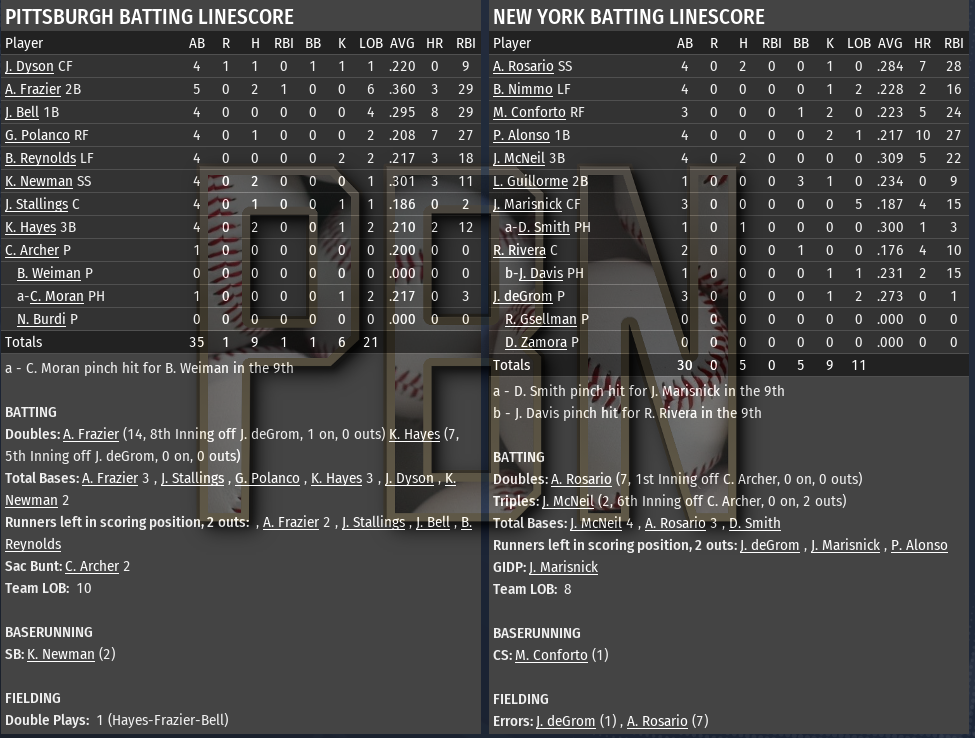 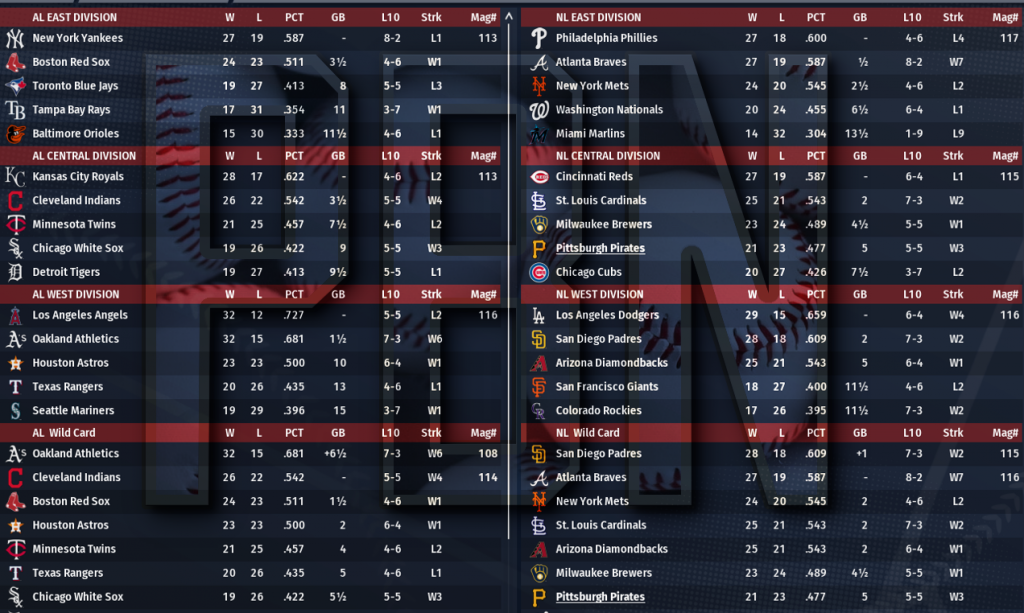 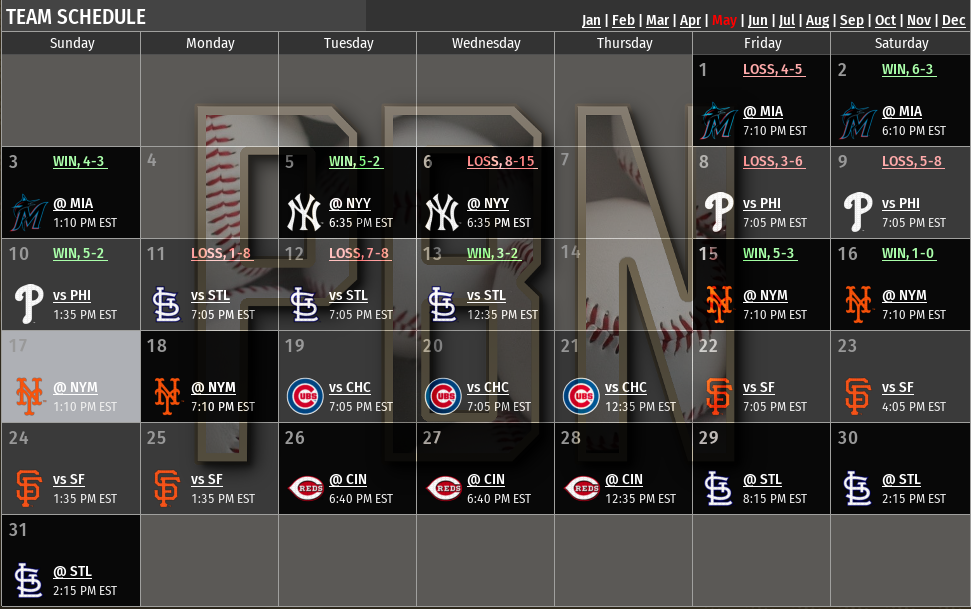