OOTP: Chris Archer and the Pirates Open a Series Against the Cardinals

The Pirates open a three game series with the Cardinals, with Chris Archer taking the mound. 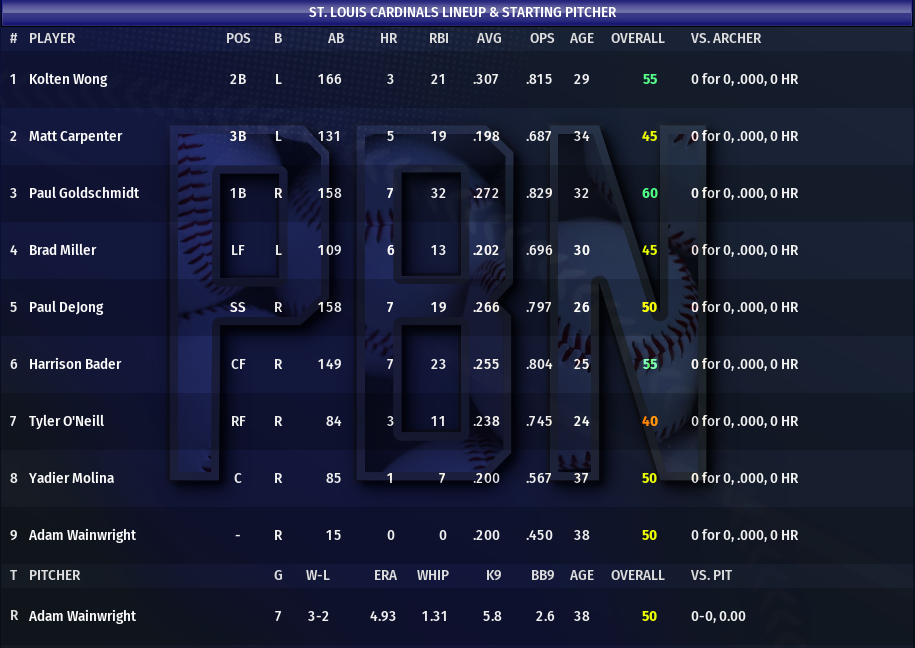 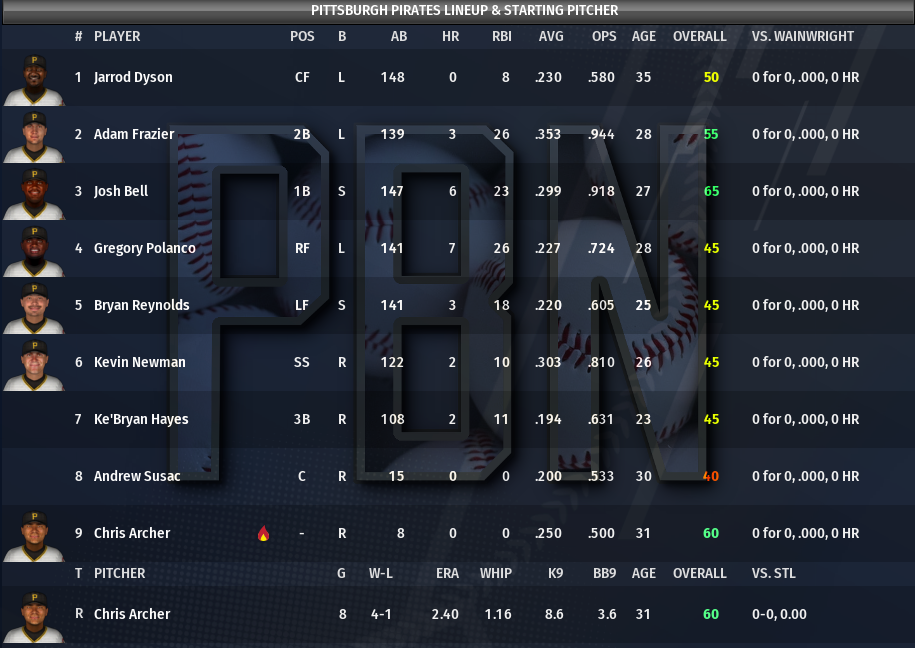 Wong pops out in the middle of the infield. Archer walks Carpenter. He follows with a fly out and a ground out to end the inning.

Archer walks DeJong to start the second. He followed with two strikeouts, followed by getting Yadier Molina to ground into a fielder’s choice.

Wainwright had a quick inning, getting three ground outs to the left side of the infield.

Wainwright rips a double down the first base line to start the third. Wong singles to left and Wainwright moves to third. Carpenter strikes out. Goldschmidt grounds out weakly to first, allowing Wainwright to score. Archer gets a strikeout to end the inning.

Hayes singles to right for the first hit of the game. Susac singles, with Hayes moving to second. Archer tries to bunt the runners over, but Hayes is thrown out at third. Wainwright gets two fly outs to end the inning.

Archer struck out the side in the third inning, giving him seven strikeouts on the day.

Bell lines out to center. Polanco draws a walk. A wild pitch allows Polanco to move to second. Reynolds draws a walk on a full count. Newman singles to right, loading the bases. Hayes flies out to right. Polanco tags from third and scores. Reynolds takes third on the throw home. Susac grounds out to short.

Molina leads off the fifth with a single. Archer strikes out Wainwright, with Molina stealing second during the at-bat. Wong pops out to short. Carpenter draws a walk. Goldschmidt hits a three run homer to left. Miller grounds out to third.

Kevin Kramer enters as a pinch hitter for Archer and strikes out. Dyson strikes out. Frazier flies out to center.

Edgar Santana comes in to pitch for the Pirates. DeJong doubles down the third base line. Bader singles to center, and DeJong is held at third. O’Neill doubles to left, bringing in a run. Molina is intentionally walked to load the bases. Wainwright singles up the middle, scoring two. Brandon Waddell comes in to pitch, making his MLB debut. He gets a 6-4-3 double play against Wong, and gets Carpenter to ground out to second.

Wainwright retires the side in order.

Waddell walks Goldschmidt. Miller strikes out. DeJong walks. Richard Rodriguez comes on in relief. Bader grounds into a 3-6 fielder’s choice, but beats the throw back to first. O’Neill strikes out to end the inning.

Newman flies out to right. Ryan Headley comes in to pitch for the Cardinals. Hayes grounds out and Susac flies out.

Tony Barnette comes in to pitch for the Cardinals. Colin Moran enters as a pinch hitter and grounds out to second. Dyson pops out in foul territory. Frazier flies out to center.

Bell singles to right. Polanco strikes out. Reynolds grounds into a 4-6-3 double play. 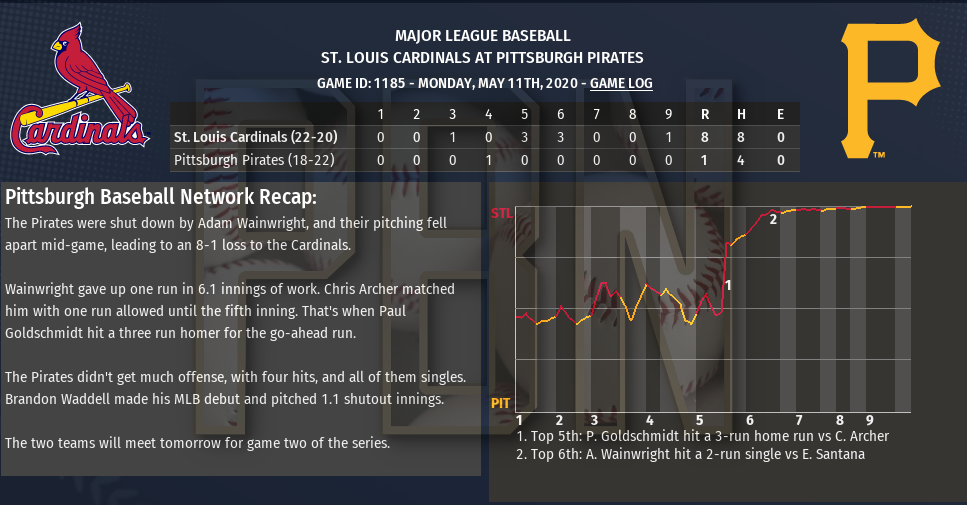 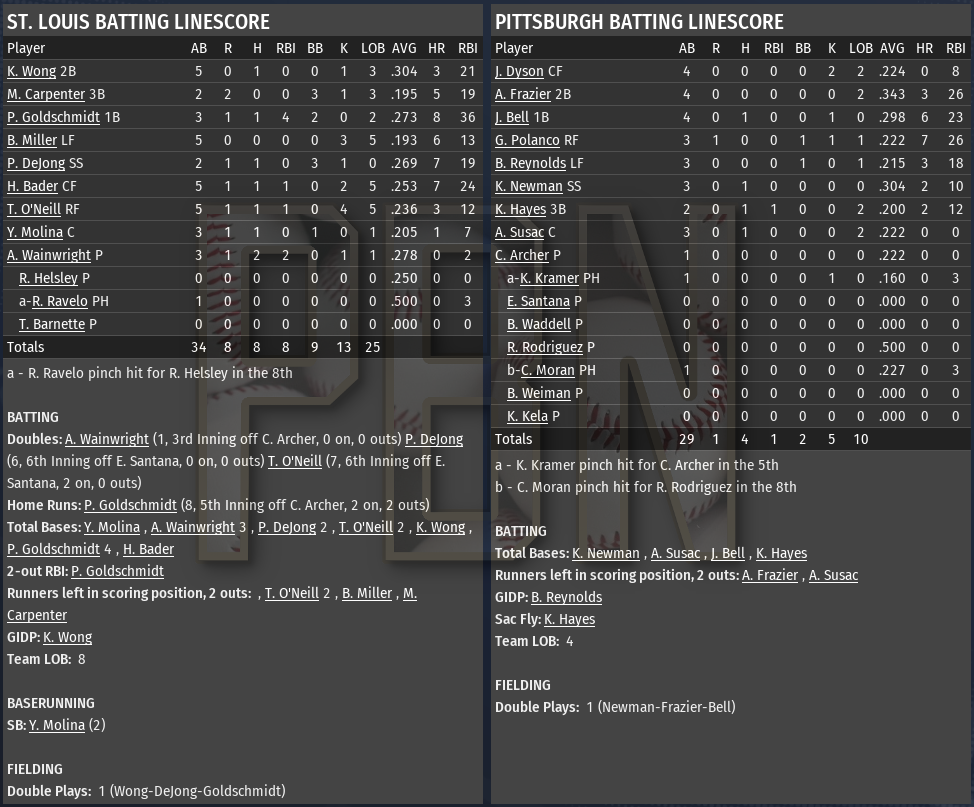 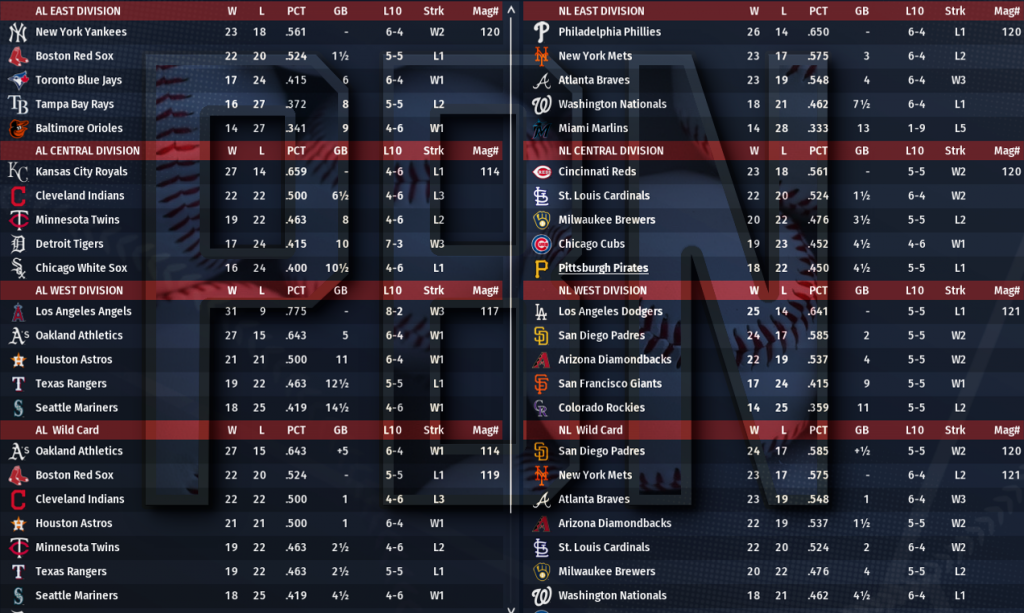 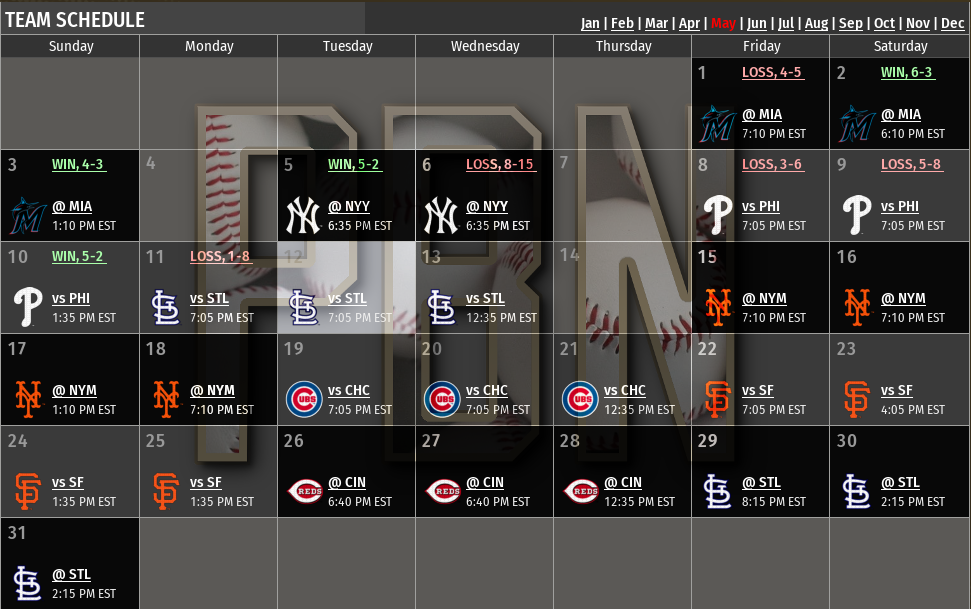