The Pirates have been getting strong results from Mitch Keller lately, and they’ll look to him tonight to try and even the series against the Phillies. 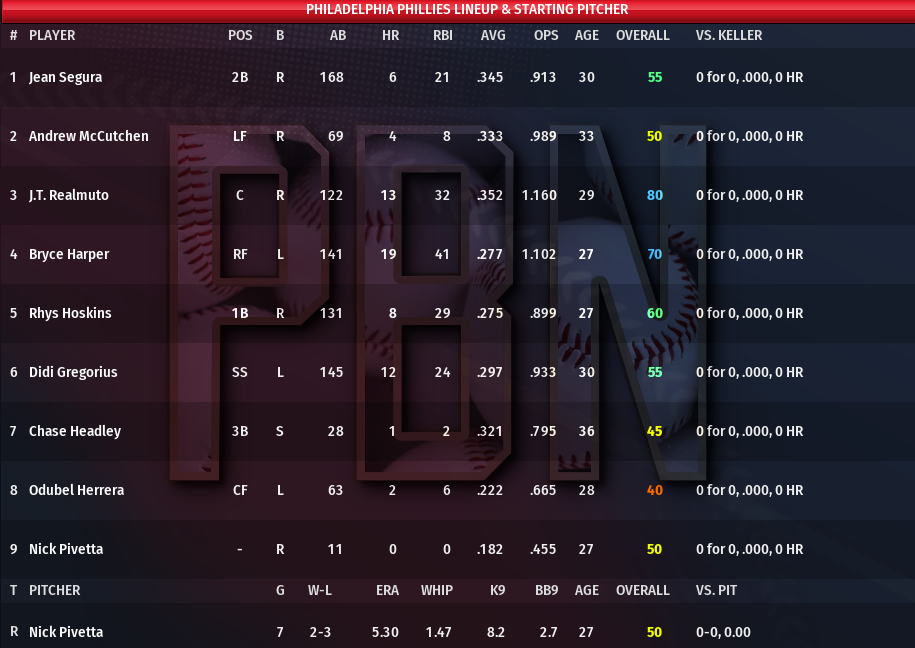 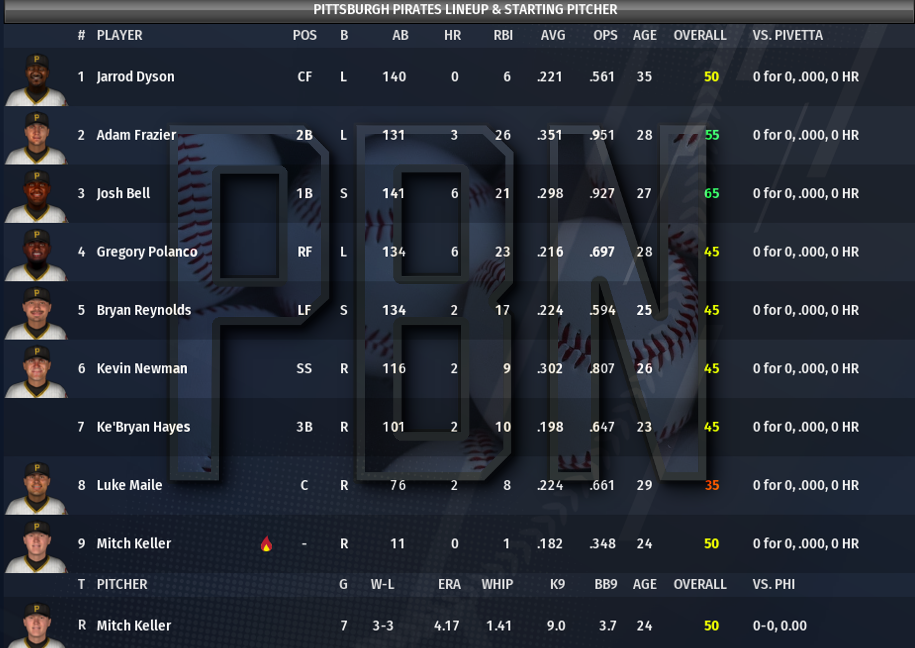 Jean Segura leads off with a single to right field. Andrew McCutchen singles on a line drive through the hole on the left side, with Segura being held at second. Realmuto singles past a diving Kevin Newman, scoring Segura from second, and putting runners on first and second. Harper reaches on a slow rolling infield single to Frazier, loading the bases. Hoskins popped out to third for the first out of the game. Gregorius pops out to short for the second out. Keller walks Headley to bring in a run. He issues another walk to Herrera on a 3-2 pitch, bringing in the third run. Keller strikes out his mound opponent to end the inning.

Dyson is out at first on a bunt attempt. Frazier pops out to third. Bell draws a walk. Polanco flies out to right.

Segura flies out to right to start the second. McCutchen singles up the middle. Realmuto singles on a sliding catch attempt that Bryan Reynolds just missed. Harper grounds into a 4-6-3 double play.

Reynolds takes a 1-1 pitch over the left field wall down the line for a solo homer. It had an exit velocity of 102.5 MPH and went 352 feet. Newman flew out to center. Hayes struck out. Maile grounded out to third.

Hoskins grounds out in front of the plate. Gregorius singles on a bloop hit that falls into right field. Headley grounds into a 1-6-3 double play.

Keller strikes out to start the bottom half of the inning. Dyson reaches on an error by the pitcher on a bad throw to first. A wild pitch allows him to take second base. Frazier singles on a line drive to left, but Dyson is held at third. Bell flies out to center, scoring Dyson from third. Polanco flies out to shallow center field.

Keller retired the Phillies in order with two groundouts and a line out to third.

Reynolds struck out swinging. Newman walked. Hayes struck out. Maile singled to center, with Newman stopping at second. Keller reaches in an infield single on a slow roller to third. Dyson singles up the middle, bringing in two runs to give the Pirates the lead. Frazier strikes out swinging.

McCutchen leads off the fifth with a single into center field. Realmuto grounds into a 5-4-3 double play. Harper draws a walk, but Keller picks him off at first with a 1-1 count.

Bell grounds out back to the mound. Gregory Polanco homers over the Clemente Wall in right. The homer went 387 feet and had a 102.5 MPH exit velocity. Right-handed pitcher Reggie McClain comes on for the Phillies. Reynolds strikes out. McClain was injured on the last pitch and removed from the game. Left-handed pitcher Steven Okert comes into the game. Newman singles to left. Hayes strikes out.

Hoskins leads off with a walk. Keller gets Gregorius to ground into a 5-4-3 double play. Headley grounds out to first.

Odubel Herrera homers over the wall with some help from the wind, cutting the lead to 5-4. Neil Walker enters the game as a pinch hitter and singles past a diving Adam Frazier. Michael Feliz comes on in relief. He walks Segura. McCutchen hits a double down the third base line, scoring two runs and giving the Phillies the lead. Realmuto grounds out to third. Harper is intentionally walked. Edgar Santana comes on in relief. Hoskins singles to left and McCutchen scores from second. Gregorius doubles on a line drive to right-center, scoring another and putting runners at second and third. Headley grounds out back to the mound. Herrera flies out to center field.

Left-hander Jose Alvarez comes in to pitch for the Phillies. Frazier grounds out. Bell struck out from the right side, swinging at an inside pitch. Polanco singled to right, but was thrown out trying to steal second base with Reynolds at the plate.

Neverauskas walks Harper on four pitches. Hoskins singles to right. Gregorius strikes out. Headley strikes out. Kyle Crick enters the game and gets Herrera to ground out.

Hector Neris comes in to close out the three run lead for the Phillies. Maile strikes out. Colin Moran enters as a pinch hitter and strikes out. Dyson strikes out to end the game. 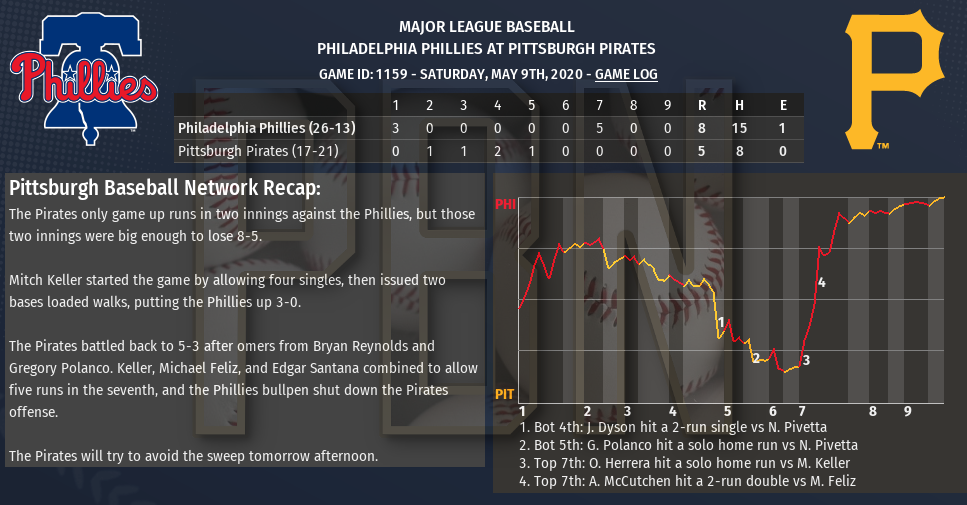 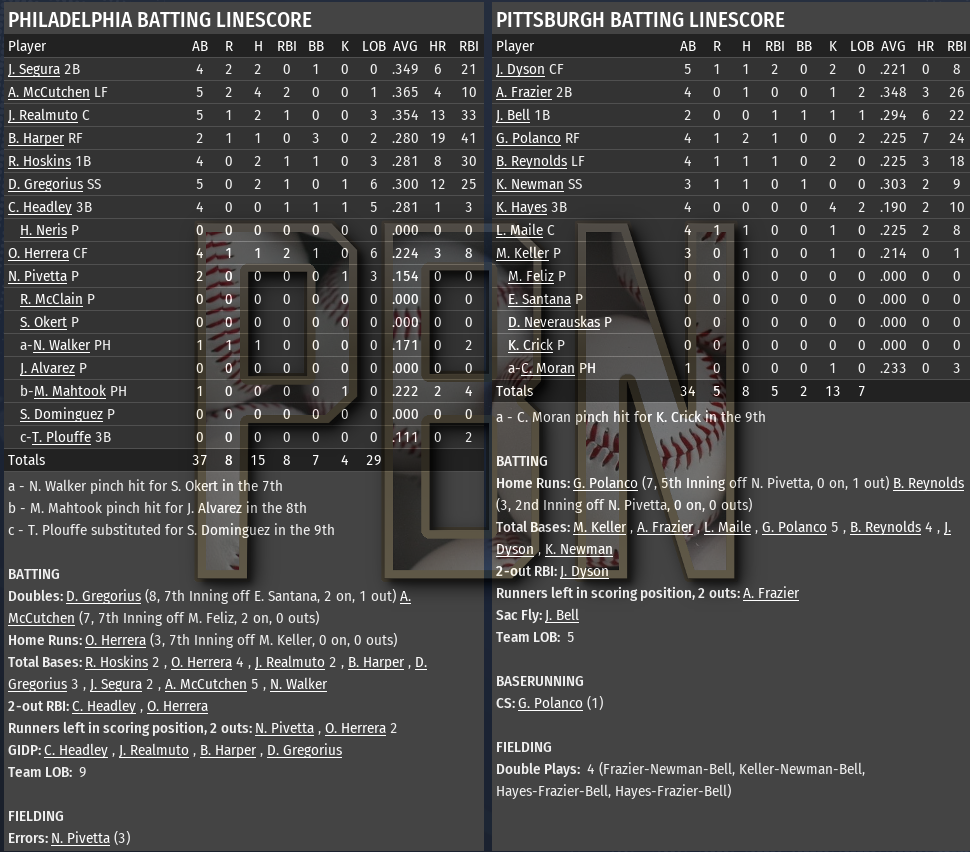 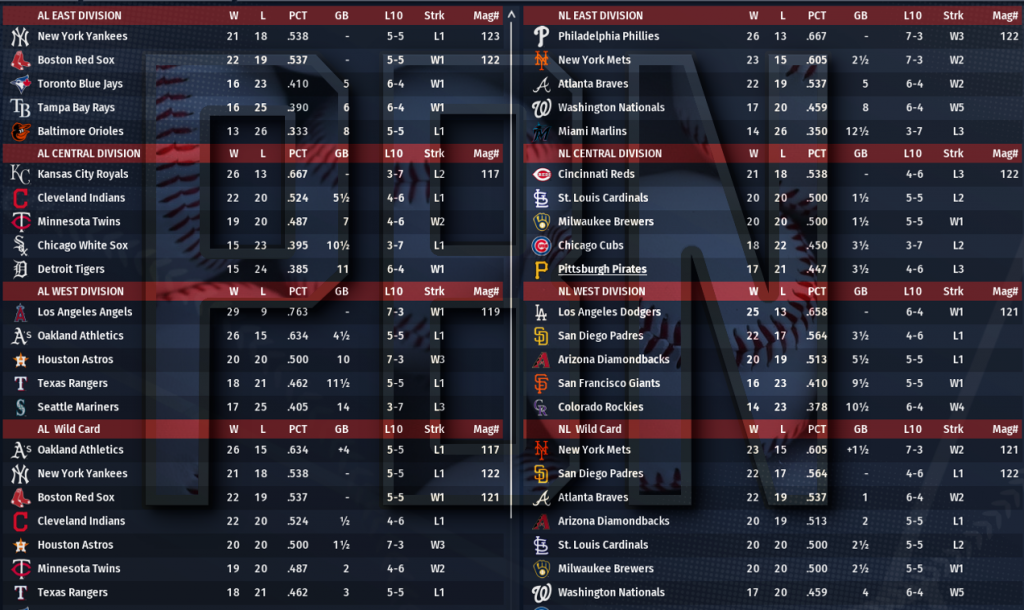 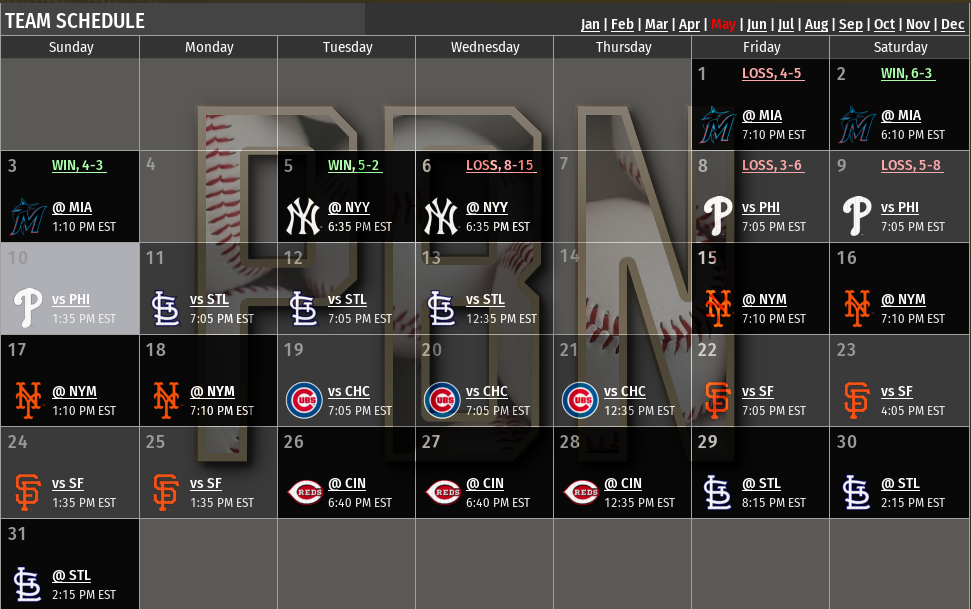