OOTP: Chris Archer Moved Up a Day to Face the Yankees

We had a real life rain delay, as I was knocked out with a migraine most of today. Even worse, the OOTPirates moved Chris Archer up a day, which breaks up the Archer/Gerrit Cole matchup tomorrow. 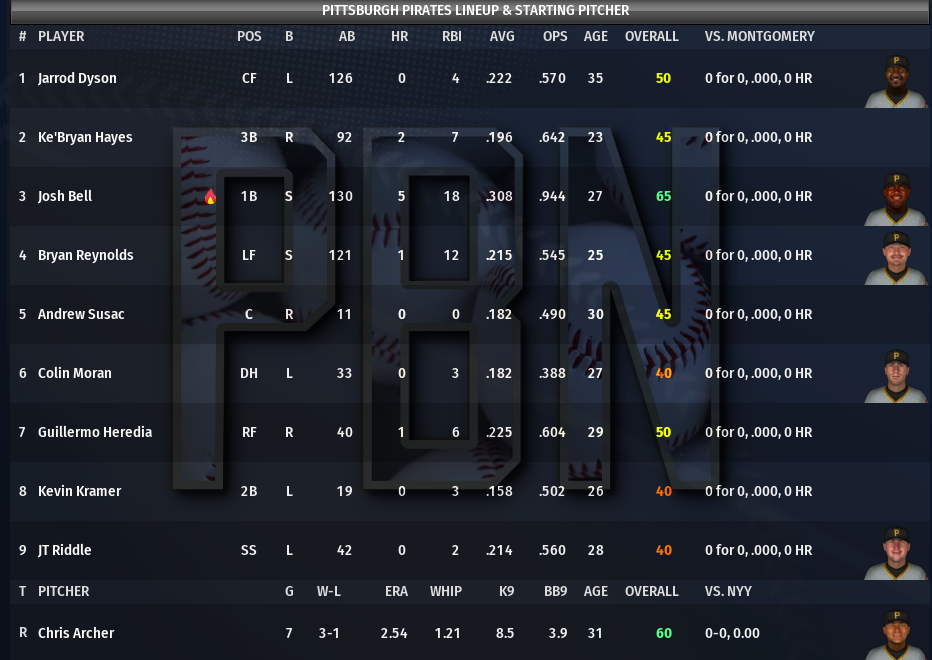 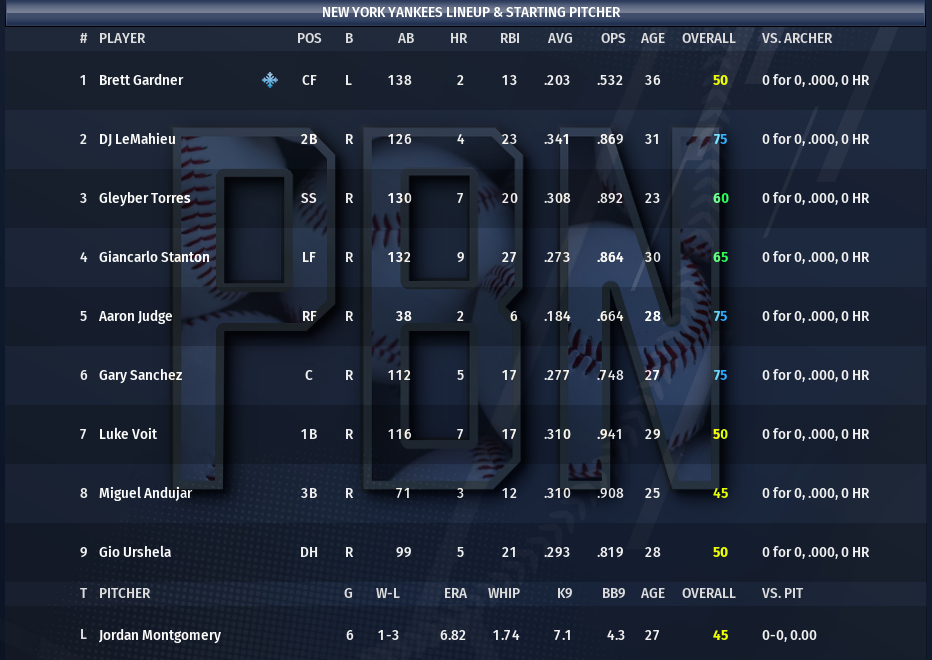 Dyson leads off with an infield single. Hayes grounds into a fielder’s choice, with Dyson out at second. Josh Bell homers to left-center, giving the Pirates a 2-0 lead. The ball went 433 feet with a 104.4 MPH exit velocity. Reynolds strikes out looking. Susac singles up the middle. Moran flies out to right.

Archer strikes out the first two batters before giving up a double down the third base line to Gleyber Torres. Giancarlo Stanton hit a towering fly ball to deep center field, which Jarrod Dyson caught at the wall for the final out.

Heredia singles to right. Kramer strikes out. Riddle singles and Heredia goes to third. Dyson strikes out. Hayes grounds out to short.

Archer retired the side in order, getting another strikeout in the process.

Reynolds reached on an error by first baseman Voit, but the Pirates couldn’t do anything else in the top of the third.

Archer retired the side in order, with another strikeout.

Heredia flies out to deep left. Kramer hits a loop single over short. Riddle singles to center and Kramer moves to second. Dyson strikes out and Hayes grounds out.

Archer issued a two-out walk to Stanton, then got a fly out against Judge to end the inning.

Gary Sanchez leads off with a single. Voit grounds into a 6-4-3 double play. Andujar reaches on an infield single. Archer strikes out Urshela.

Moran leads off with a single to right. Heredia singles and Moran moves to second. Kramer pops out to short as the ump calls the infield fly rule. Riddle grounds into a fielder’s choice, with Heredia out at second. Dyson singles, scoring Moran. The Yankees turn to Zack Britton in relief. Hayes lines a double to the right field corner, scoring two more runs. Bell grounds out to short.

Archer gets a strikeout, flyout, and groundout against the top of the order.

Reynolds strikes out. Susac walks. The Yankees turn to right-hander Deivi Garcia. Moran singles to center and Susac moves to third. Heredia walks to load the bases. Kramer strikes out. Riddle strikes out.

Stanton doubles to the wall in center. James Marvel comes on to replace Archer, who was at 99 pitches. Aaron Judge hits a two-run homer to left. Sanchez flies out to left. Voit grounds out to short. Andujar grounds out to second.

The Pirates were retired in order in the eighth.

Marvel stays in and gets a ground out. Gardner doubles to center. LeMahieu strikes out. Torres strikes out.

Reynolds flies out to center. Left-hander Luis Avilan comes on to pitch. Susac and Moran ground out.

Nick Burdi comes on to close it out for the Pirates. He strikes out Stanton on a 91 MPH slider. Judge walks. Sanchez flies out to center. Keone Kela comes in for some reason and gets a fly out to left to end the game and steal the save. 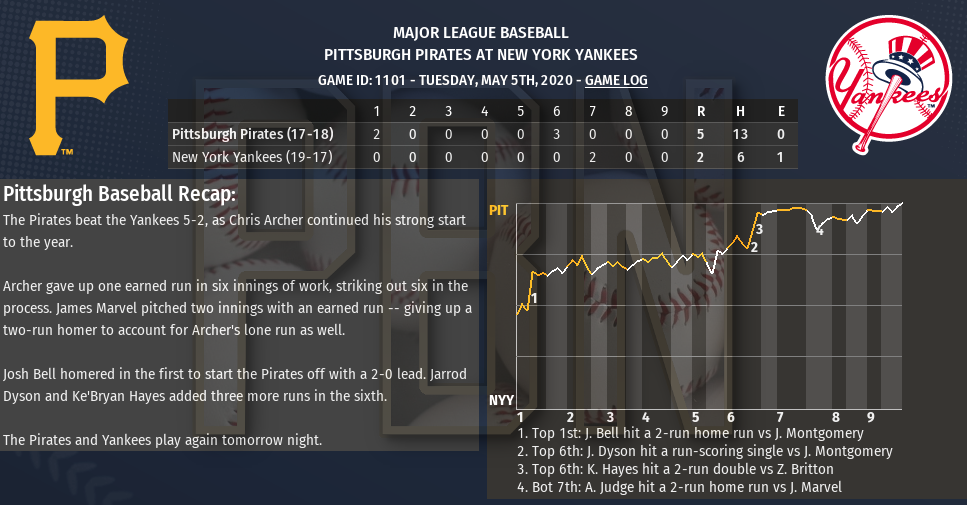 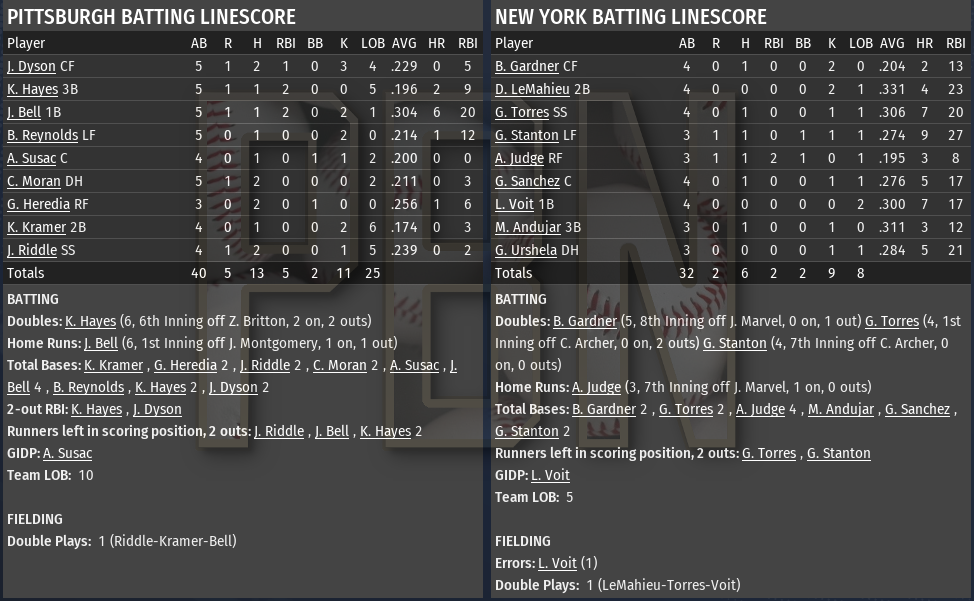 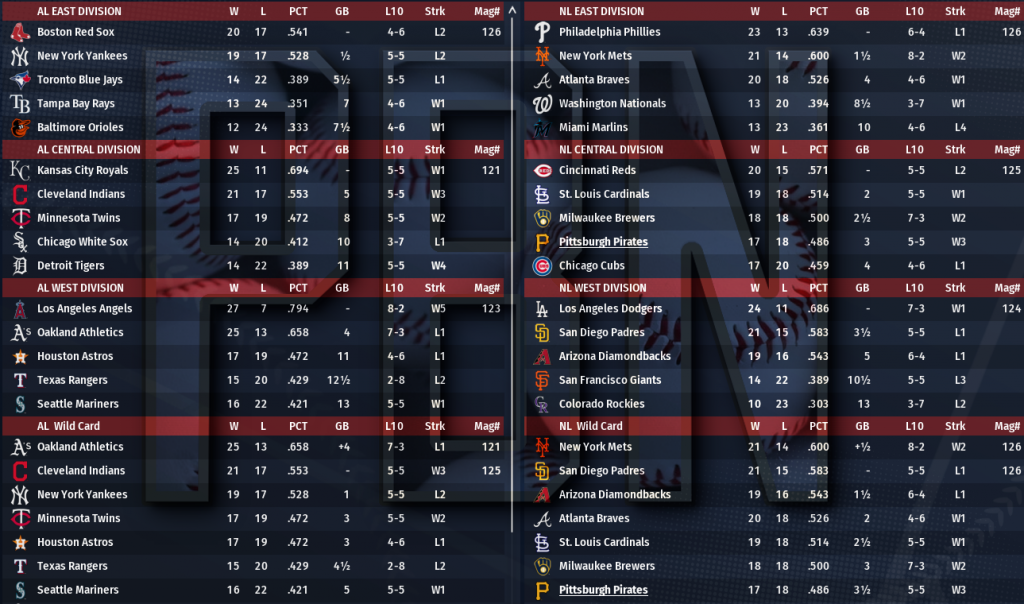 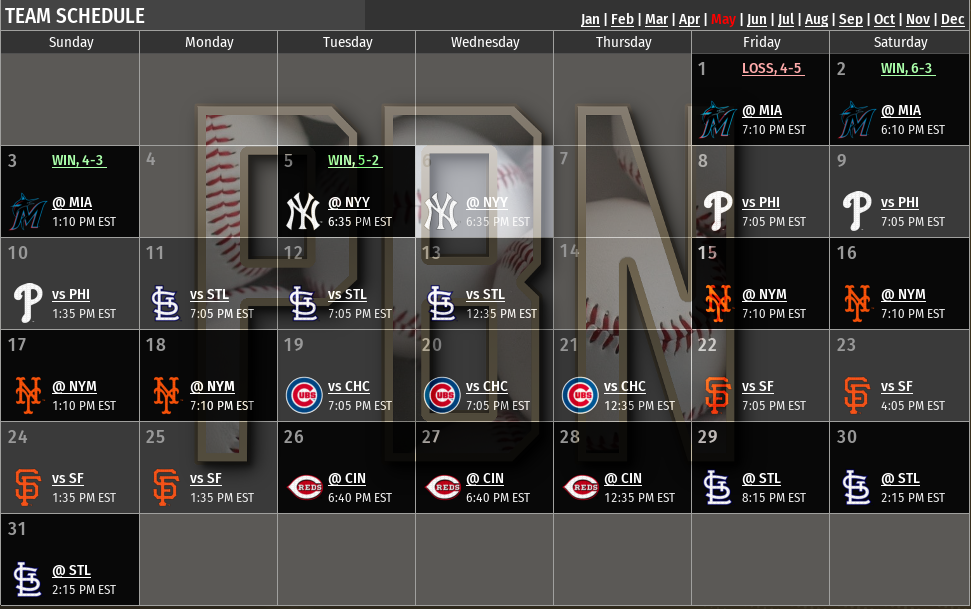