OOTP: Pirates Try to Avoid the Sweep Against the Cubs

The Pirates have lost four in a row and the first two games of this series against the Cubs. Today they try to avoid the sweep, with Chris Archer on the mound looking to continue his hot start to the season. 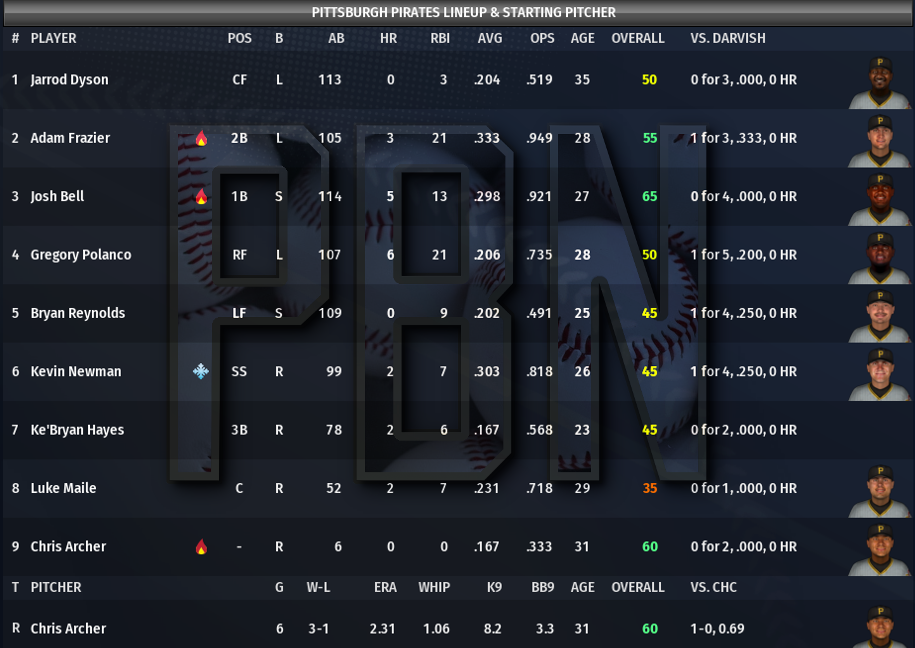 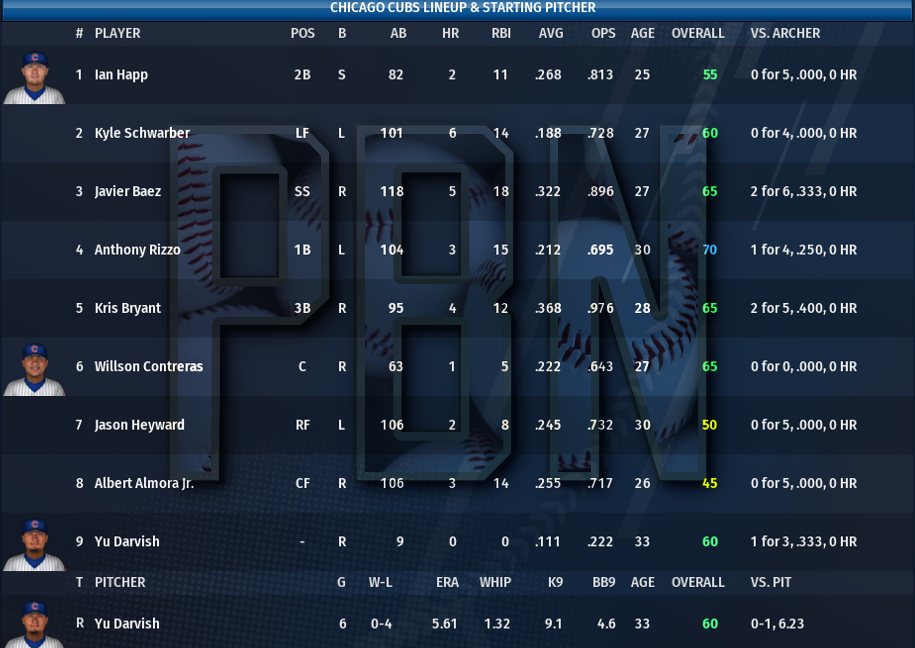 Dyson led off with an infield single. Frazier popped out to first. With Bell at the plate, Dyson stole second easily. Josh Bell doubled off the wall in center, giving the Pirates a 1-0 lead. Polanco lined out to center. Reynolds struck out.

Archer gives up a leadoff single to Happ on a line drive to right field. He followed by striking out Schwarber and Baez. Rizzo draws a walk. Bryant flies out to center.

Newman singles to center. He’s erased when Hayes grounds into a 5-4-3 double play. Maile grounds out to second.

Archer strikes out Contreras on a slider. Heyward doubles on a line drive to right. He moves to third on a wild pitch. Almora flies out to right, and Heyward scores, beating the throw from Polanco. Darvish grounds out to short.

Archer reaches on an infield single on a slow roller down the first base line. Rain begins to fall with Dyson at the plate. Dyson draws a walk after holding up on a 3-2 check swing. Frazier hits a line drive to the right-center gap for a double, scoring Archer from second. The rain stops with Josh Bell at the plate. Bell singles to right, bringing in two runs. Darvish picks off Bell at first. Polanco struck out and Reynolds grounded out back to the mound.

Happ flies out to right. Schwarber strikes out on three pitches. Baez singles up the middle. Rizzo singles to left, with Baez moving up a base. Bryant doubles high off the wall in left field, scoring a run and putting runners at second and third. Contreras walks to load the bases. Heyward flies out to deep center field.

Newman singles up the middle to start the fourth inning. Hayes walks. Luke Maile doubles to left field, bringing in a run. Archer strikes out looking. Alec Mills comes in to replace Darvsh. Dyson grounds out in front of the plate. Frazier flies out to left.

Almora doubles to the corner in left field. Mills sacrifices him over to third with a bunt. Happ walks, putting runners at the corners with one out. Schwarber draws a walk. Baez strikes out. Rizzo lines out back to Archer.

Bell grounds out into the shift, hitting it to the shortstop who was positioned up the middle. Polanco flies out to shallow right field. Reynolds draws a walk. Newman grounds out to second.

The Pirates turn to James Marvel in relief, with Archer sitting at 91 pitches through four innings. Bryant singles to left to start the inning. Contreras grounds into a 5-4-3 double play. Heyward grounds out to second.

Hayes strikes out swinging. Maile grounds out to third. Kevin Kramer enters to pinch hit for Marvel and strikes out.

Kyle Crick comes on in relief. He walks Almora to start the inning. Jason Kipnis enters as a pinch hitter for Mills and strikes out. Happ flies out to right. Edgar Santana enters to replace Crick. Schwarber strikes out looking for his third strikeout of the day.

Trevor Megill enters to pitch for the Cubs. Dyson leads off with a double to the left field corner. Frazier draws a walk on four pitches. Bell strikes out swinging on a 3-2 count. Left-handed reliever Rex Brothers comes in to pitch. Polanco hits a grounder in front of the plate and Contreras goes to second for the out. Reynolds draws a walk, loading the bases. Newman drops a double into right-center field to bring in two more runs. Casey Sadler comes in for the Cubs. Hayes grounds out to second.

Edgar Santana returns to pitch for the Pirates. Baez flies out to left. Rizzo singles up the middle. Bryant grounds into a 6-4-3 double play.

Dovydas Neverauskas enters the game for the Pirates. Contreras grounds to third, but Hayes bobbles the ball due to the wet grass. Heyward singles to right, with Contreras stopping at second. Almora grounds into a fielder’s choice, with Heyward out at second. Morrow stays in and sacrifices Almora to second. Happ strikes out.

Newman flies out to deep center field. Hayes singles to right field. Maile strikes out. Colin Moran enters as a punch hitter and grounds out.

Blake Weiman comes in to close it out for the Pirates. Rain starts to fall again with Schwarber at the plate. Schwarber lines out to center. Baez grounds out to third. Victor Caratini enters as a pinch hitter and singles up the middle. Bryant doubles to left-center, with Caratini stopping at third. Contreras doubles to left, bringing in two runs. Heyward strikes out to end the game. 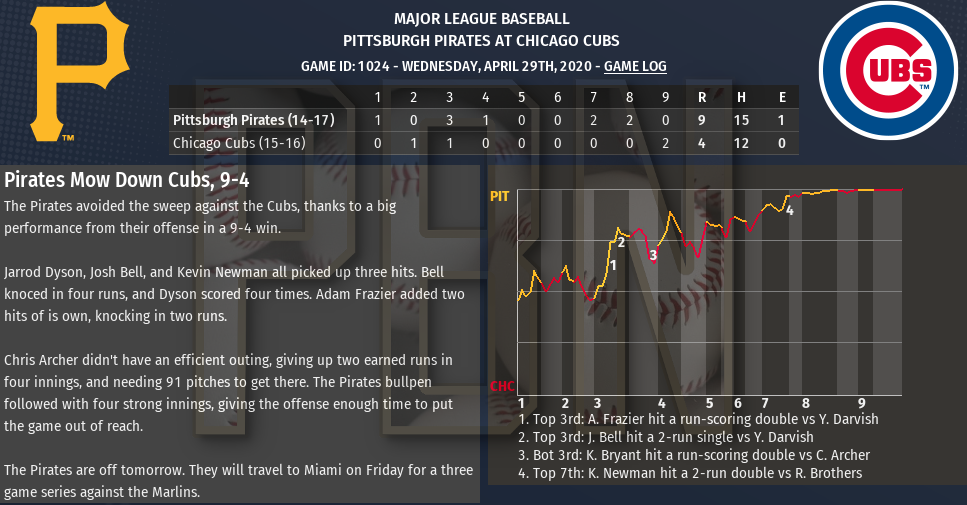 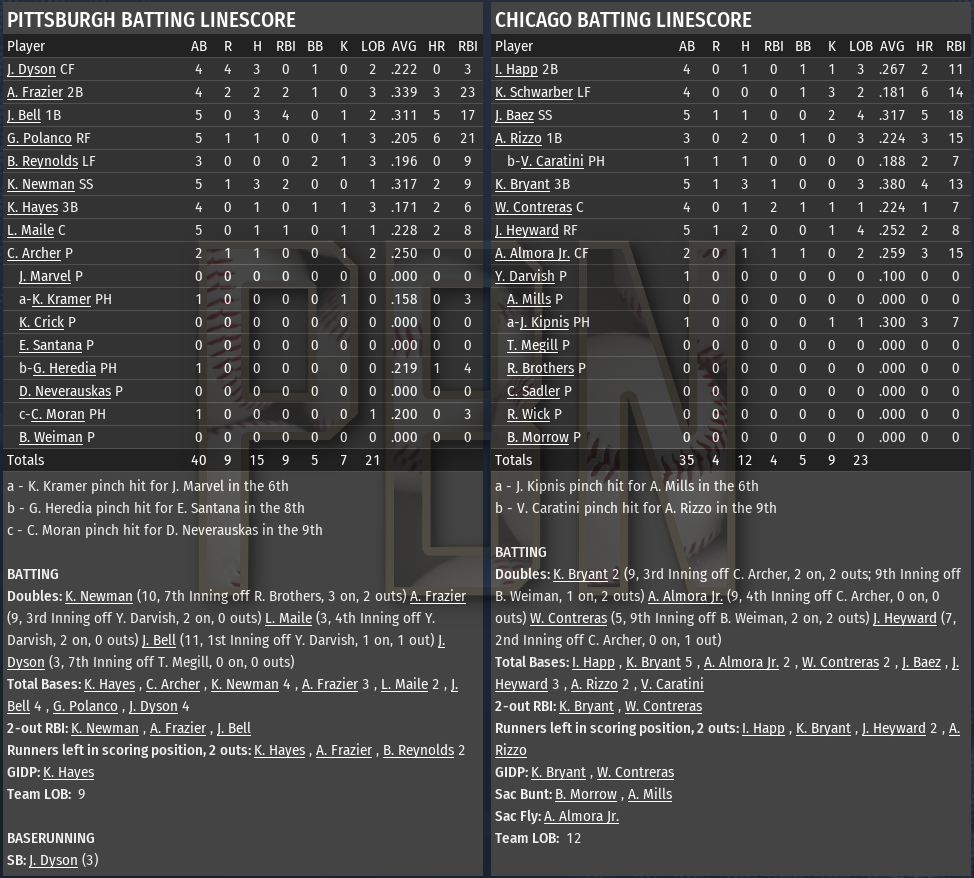 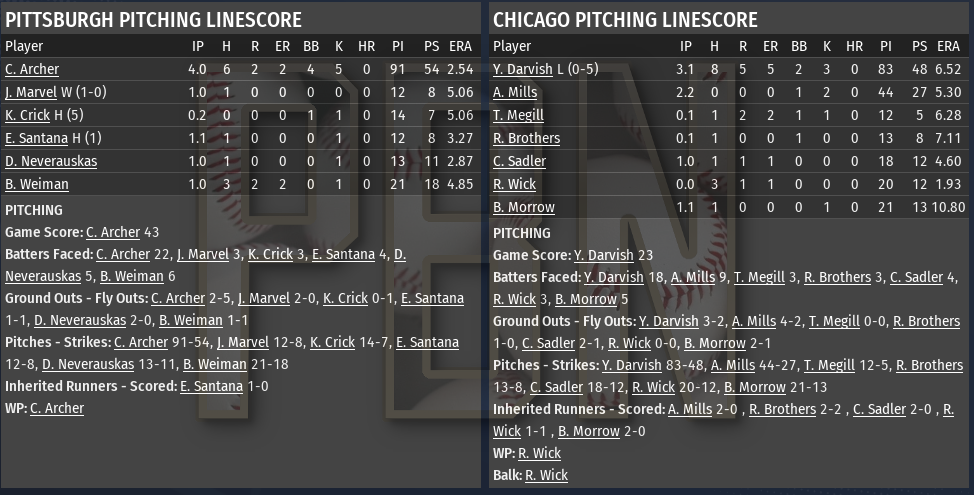 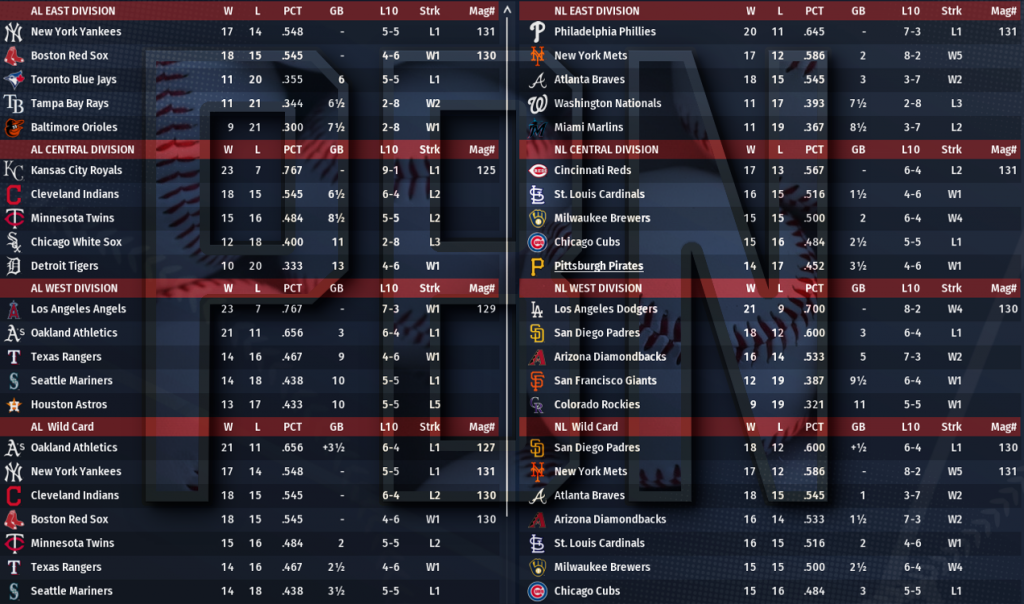 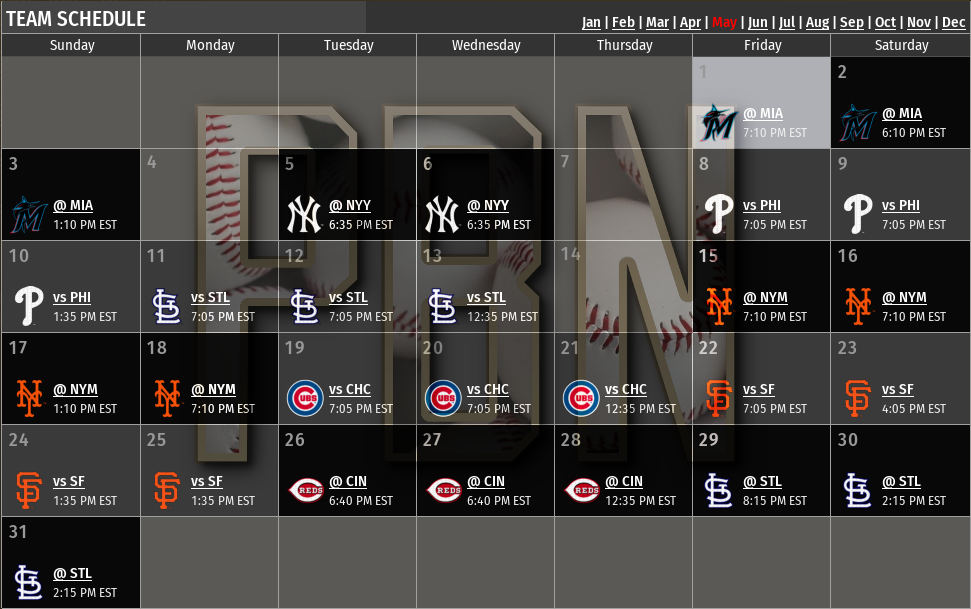