OOTP: Chris Archer Looks to Continue His Strong Start to the Season

The Pirates take on the Dodgers tonight at PNC Park, as part of a three game series. Chris Archer takes the mound for the Pirates, hoping to continue his strong start to the year. Last time out, he gave up one run in six innings in a 4-1 win against the Dodgers. Archer has given up four earned runs in 25 innings over his last four starts. 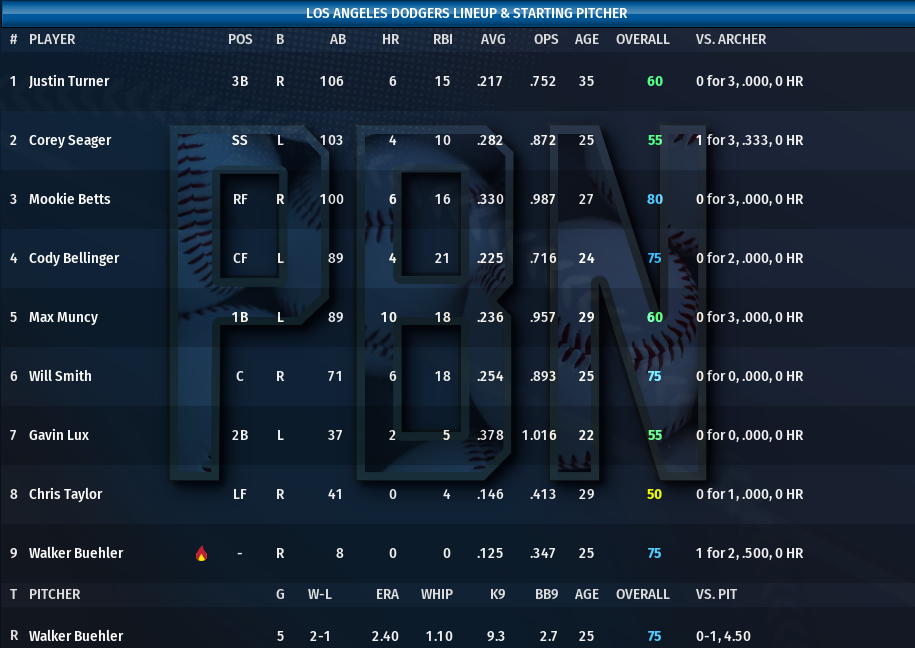 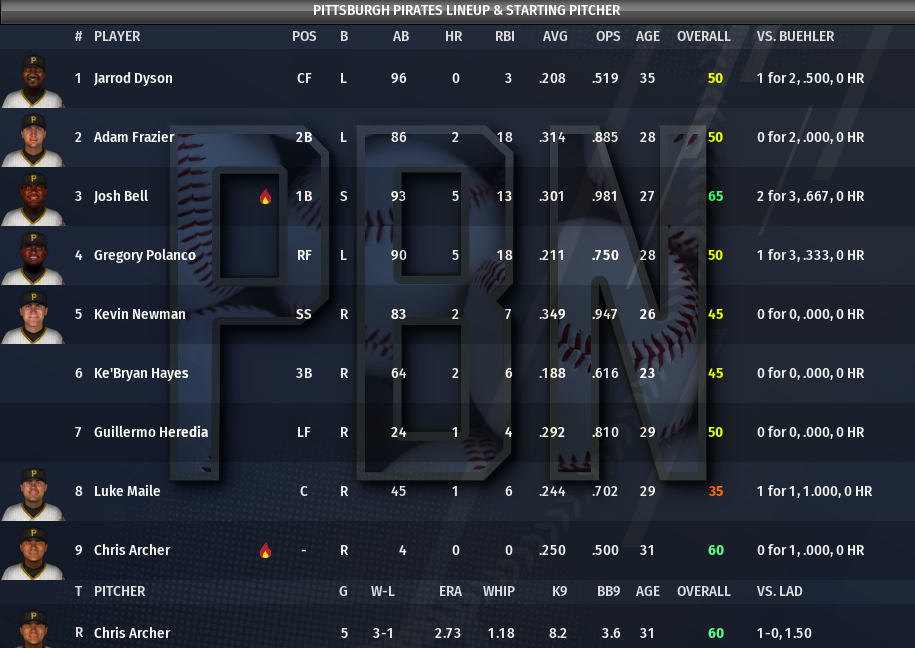 Archer had a quick first inning, getting a ground out to third and two fly outs to center.

Buehler struck out Dyson to start the inning. Adam Frazier singled between the third baseman and shortstop. Josh Bell popped out to the second baseman in shallow right field. Polanco grounded out to right.

Archer struck out Bellinger with a slider. Muncy grounded out, unassisted, to first base. Will Smith strikes out swinging to end the inning.

Buehler had a quick inning, with a two fly outs, and a strike out against Hayes.

Archer set the Dodgers down in order, with a fly out, a ground out, and a strikeout against Buehler.

Maile flew out to center, Archer struck out, and Dyson grounded out to second.

Archer got two more quick outs, before giving up a single to Mookie Betts. After Betts stole second, Archer walked Bellinger. He struck out Muncy to end the inning.

Frazier flew out to center to start the inning. Josh Bell doubled to the wall in center field, extending his hitting streak to 13 games. Polanco grounded out to second, with Bell moving to third. Newman hit a hard line drive back to the mound, but Buehler caught it for the final out.

Archer retired the side in order, but not before Gavin Lux hit a towering fly to the right field wall that went for an out.

Buehler struck out Hayes and Heredia to start the inning. Luke Maile hit a solo home run 412 feet to left-center, giving the Pirates a lead. The home run had an exit velocity of 111.3 MPH. Archer grounded out to first.

Archer started by getting Buehler to ground out to second. The trainer came out and looked at Archer’s right arm, and he was removed from the game. Kyle Crick came on in relief. Crick walked Justin Turner on a 3-2 pitch that Turner almost swung on. Rain started to fall as Corey Seager was at the plate. Seager flew out to center. Betts walked to bring up Bellinger. Edgar Santana came on in relief. Bellinger hit a double to the left field corner, scoring two runs. Santana walked Muncy, then got Smith to ground out to first.

Dyson popped out to second. Frazier doubled to left field. Bell struck out swinging. Polanco hit a double off the wall in deep center field. Frazier scored on the play to tie the game. Newman grounded out to second.

Santana returned for the seventh inning. Lux grounded out, then Taylor singled through the right side of the infield. Buehler attempted to bunt him over, but Santana made a good play, and went to second to start the inning ending double play.

Hayes flies out to left. The Dodgers bring in right-hander Zach McAllister. He gets Heredia to fly out to left. Maile drew a walk on a 3-2 pitch. Colin Moran came on as a pinch hitter and flew out to center.

Keone Kela comes on to pitch. He walks Turner to start the inning. Seager popped out to short, and Betts struck out swinging on an inside fastball. Turner stole second, and Kela responded by intentionally walking Bellinger. Kela struck out Muncy to end the inning.

Kela returns for the ninth inning and got Will Smith to ground out to third. Nick Burdi entered to face Gavin Lux and struck him out. Burdi struck out Taylor to end the inning.

Kevin Newman flew out to center for the first out. Hayes is clipped by a pitch and takes first base. The Dodgers go to right-hander Ross Stripling. The Pirates pinch hit Bryan Reynolds for Heredia. Reynolds rips a single through the left side of the infield, with Hayes stopping at second. Maile flew out to center for the second out. Kevin Kramer entered as a pinch hitter for Burdi. Kramer ripped a line drive single to right field, but Hayes had to hold up at third. Jarrod Dyson comes up with the bases loaded and two outs. Dyson grounds out to third, and we go to extra innings for the first time this season!

Michael Feliz comes in to pitch for the Pirates. Joc Pederson comes on to pinch hit. Pederson crushes a 2-0 pitch to right for a towering fly ball, but Polanco ranged back to his right and made the catch at the wall. Turner grounded out to second. Seager flew out to left.

The Dodgers turn to Kenley Jansen. He strikes out Frazier and Bell. With Polanco at the plate, the rain picks up and the umpire calls a delay with a 1-0 count.

The game resumes after a 34 minute rain delay.

Polanco takes a 2-2 pitch over the right field wall for the walk-off home run. 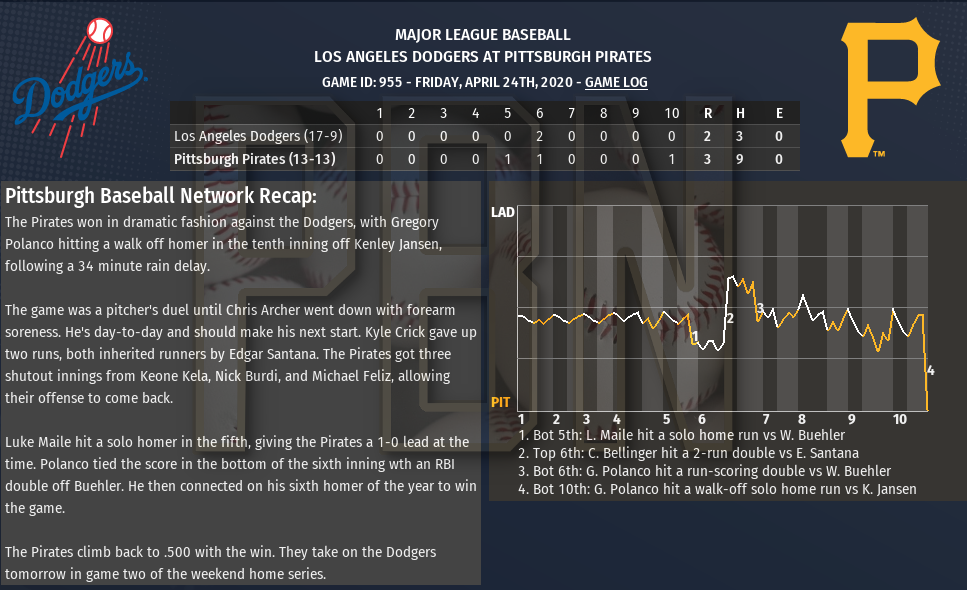 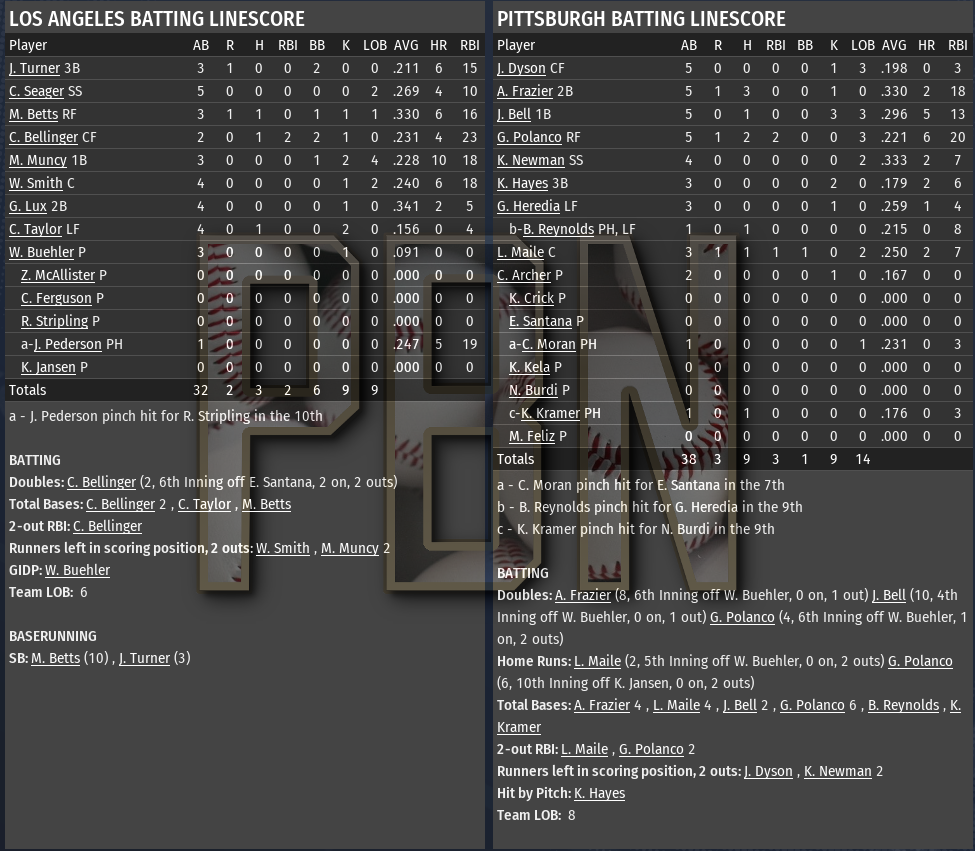 Archer is day-to-day and expected to make his next start. 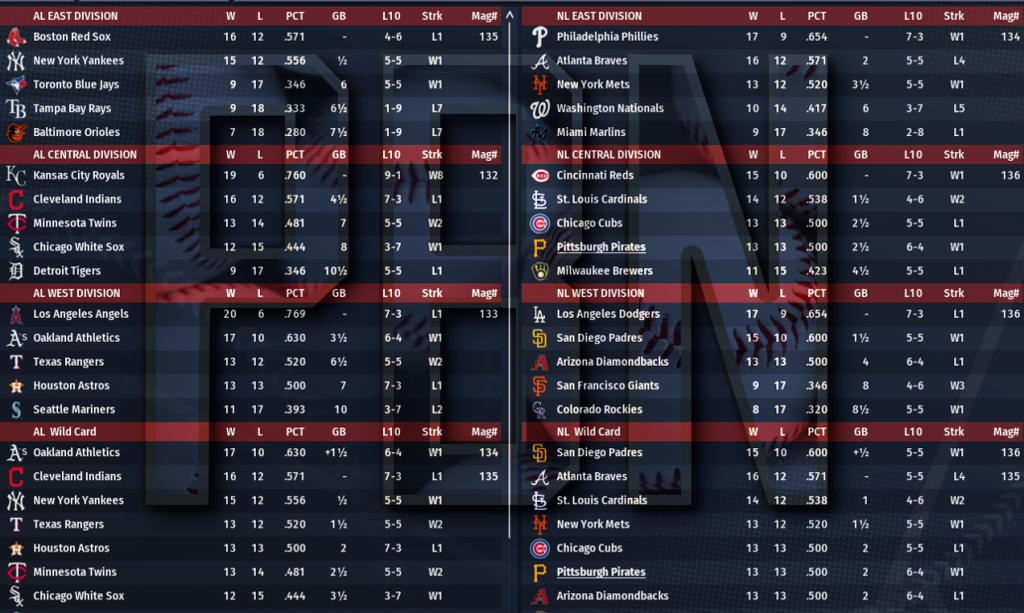 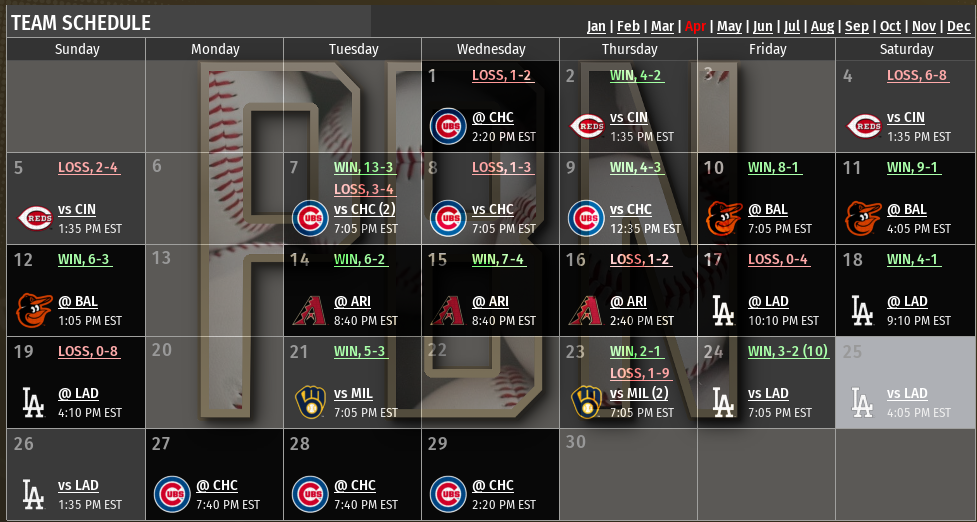