OOTP: Pirates Could Climb Back to .500 With a Win Against the Brewers

The Pirates took game one of the series against the Brewers on Tuesday. After a rainout yesterday, they take on Milwaukee in a double-header. The Pirates sit at 11-12 on the season, and could climb above .500 today. 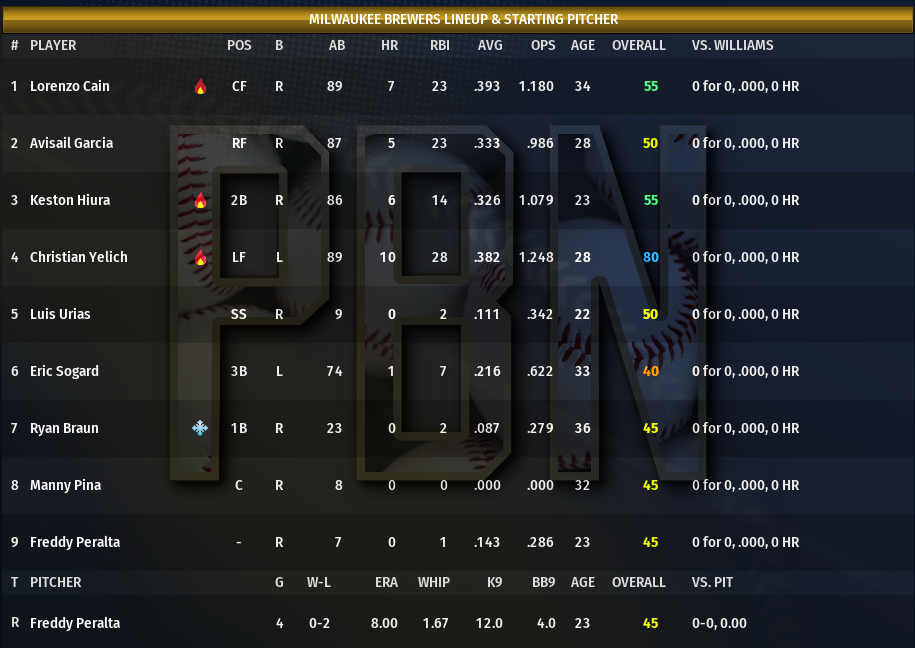 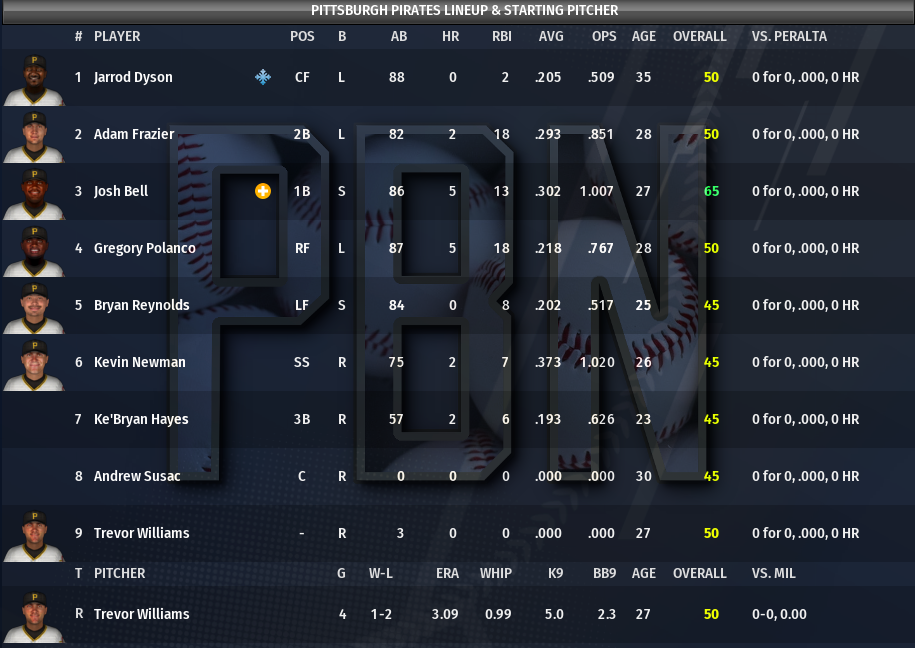 Williams gets two ground outs and strikes out Hiura for a quick first inning.

Peralta gets Dyson to fly out, then issues back-to-back walks to Frazier and Bell. Gregory Polanco grounds into a 4-6 fielder’s choice. Manny Pina allows a passed ball, letting Frazier score, with Polanco moving to second. Reynolds flies out to shallow left field.

Williams got two quick outs before hitting Eric Sogard with a pitch. Ryan Braun walked to put runners on first and second. Andrew Susac allows a passed ball, with both runners moving up 90 feet. Manny Pina is intentionally walked to bring up Peralta. Williams strikes him out.

Peralta gets a quick inning. Newman flew out and Hayes and Susac struck out.

Williams gets a ground out to second against Lorenzo Cain. Avisail Garcia gets the first hit of the game with a double down the third base line. He moves to third on a single to right by Hiura, who steals second on a 1-0 pitch. Yelich grounds out to Williams, who threw to Bell for the out. Williams was hurt on the play and removed from the game after the trainer was looking at his right hand. Blake Weiman comes on in relief and strikes out Urias.

Weiman strikes out to start the bottom of the third. Dyson follows with a strikeout. Frazier singles, but Bell grounds out to second.

Sogard grounds to Newman, who throws to Bell in the dirt. The ball gets past Bell and Sogard takes second. Newman gets credited with the throwing error. Weiman gets Braun to ground out to third. Pina flies out to left. Peralta draws a walk to turn the lineup over. Cain grounds into a 5-4 fielder’s choice.

Peralta sets the Pirates down in order with a fly out and two ground outs.

Weiman returns for the fifth inning and hits Avisail Garcia with a 1-1 fastball. He strikes out Hiura looking. Yelich strikes out swinging on an 0-2 pitch. Urias flies out to center.

Hayes flies out to start the fifth. Andrew Susac singles through the left side of the infield for his first hit with the Pirates. Weiman sacrifices him over to second. Jarrod Dyson doubles to right-center to score Susac. Adam Frazier lines out to left.

Kyle Crick enters the game for the Pirates and strikes out Sogard to start the sixth. Ryan Braun strikes out looking. Pina grounds out to short.

Right-handed pitcher Ray Black comes on and strikes out Bell. Gregory Polanco draws a walk. He moves to second on a single by Reynolds. Newman struck out swinging on a 101 MPH fastball. Hayes flies out to left.

Ben Gamel enters as a pinch hitter and flies out to center. Lorenzo Cain walks on four pitches. Michael Feliz comes on in relief. Garcia flies out to the track in the right-center gap, but Dyson ranges over a long way to make the catch. Cain steals second with Hiura at the plate. Hiura doubles on a line drive down the right field line, scoring Cain. Feliz strikes out Yelich with a slider.

Left-handed pitcher Alex Claudio comes in for Milwaukee. Susac singled to start the bottom of the inning. Colin Moran enters as a pinch hitter and strikes out. Dyson flies out to center. Frazier singles to left. Bell singles to left to load the bases and extend his hitting streak to 11 games. Polanco grounds out to second.

Keone Kela comes on for the Pirates in the eighth. He gets Urias to ground out to second. Sogard lines out to Frazier. Braun strikes out looking.

Right-handed pitcher Corbin Burnes comes in for the Brewers. Reynolds strikes out on three pitches. Newman strikes out on a 102 MPH fastball. Hayes flies out to left. 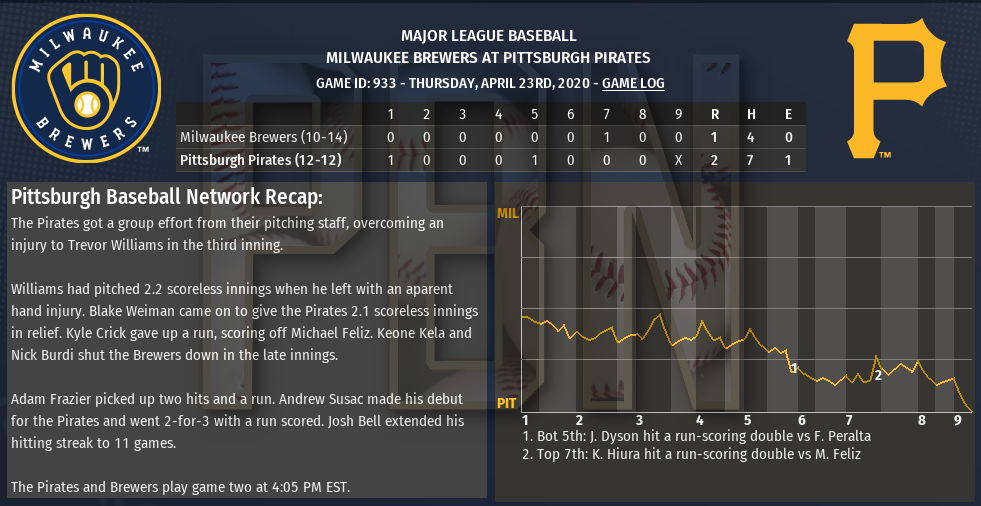 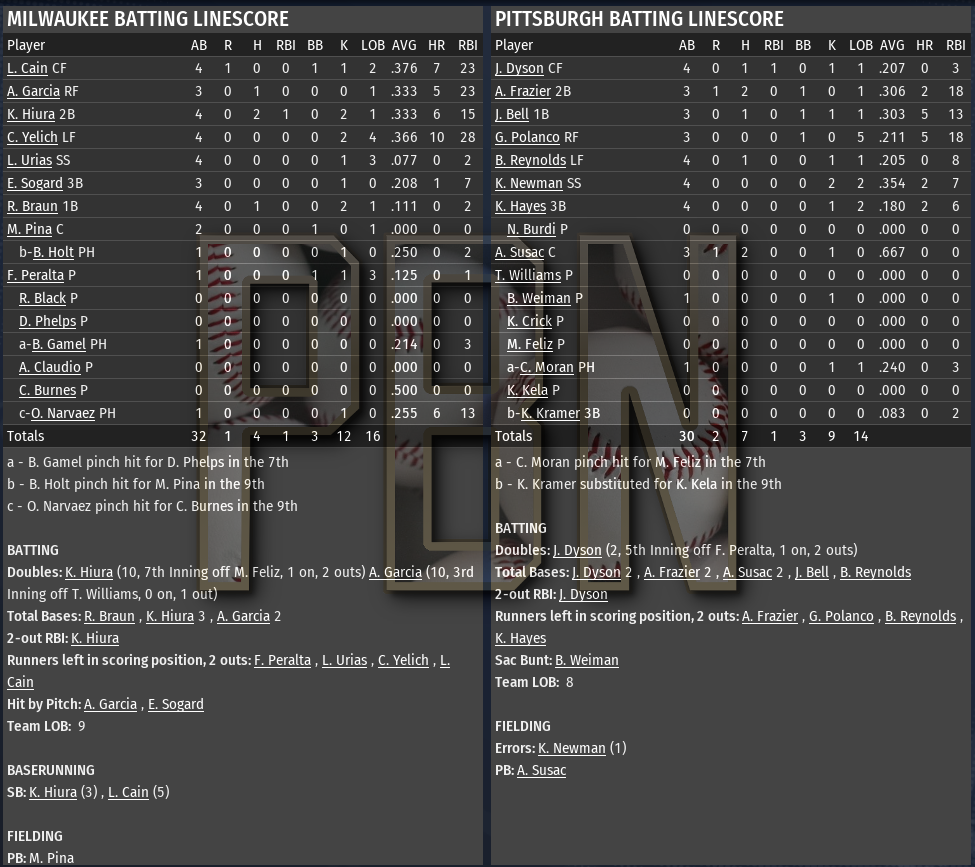