OOTP: Pirates Return Home For a Three Game Series Against the Brewers

The Pirates went into their last series at home with a 2-7 record to start the season. They split a four game series with the Cubs, putting then at 4-9, as they would take the road for a nine game road trip, including six games on the west coast.

That road trip led to a 6-3 stretch, with the Pirates doing much better on both sides of the ball since the last time they were at PNC Park. 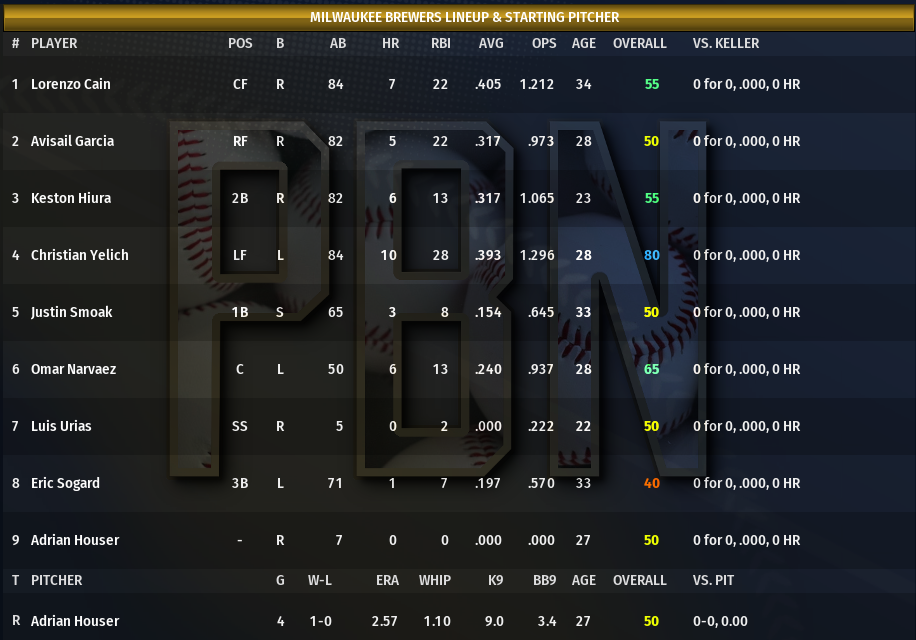 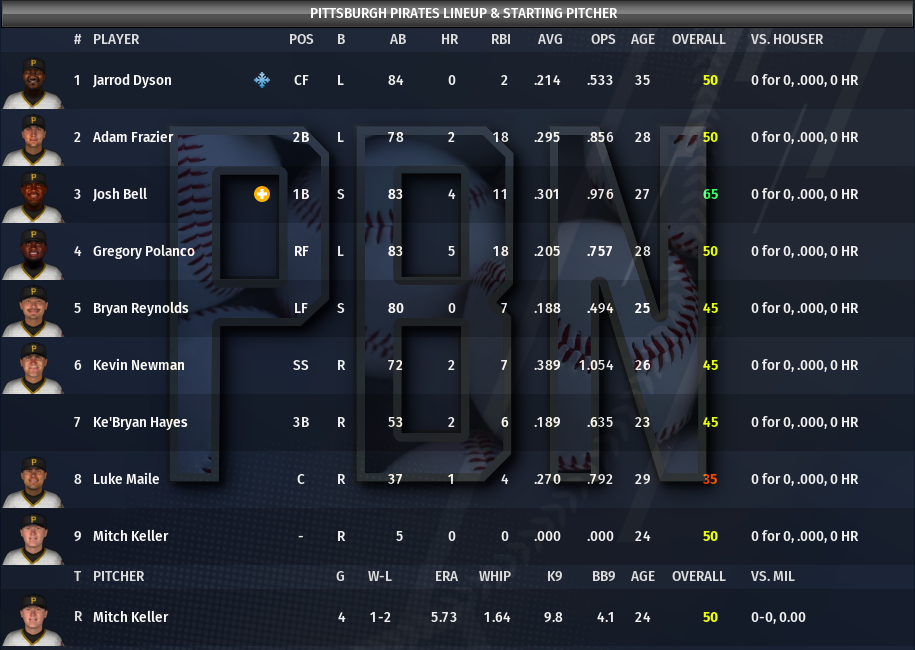 Keller struck out Lorenzo Cain looking at a 95 MPH fastball. Avisail Garcia singles to left. Keston Hiura hits a double to left-center. Garcia rounds third and scores as Newman gets the relay throw. He fires to third and gets Hiura trying to stretch the double into a triple. Yelich reaches on an infield single. He moves to second on a balk by Keller. Smoak grounds out to first.

Dyson reached on an error when Adrian Houser dropped a toss from Smoak on a grounder to the first baseman. Frazier grounded into a 6-4 fielder’s choice. Josh Bell strikes out on a curveball. Polanco flies out to right.

Navarez singles to right. Urias flies out to center. Sogard doubles to left, with Navarez holding up at third. Houser grounds out to third for the second out. Keller strikes out Cain to end the inning.

Reynolds flies out to right. Newman pops out to second base. Hayes singles to left. Maile flies out to center.

Keller gets a clean third inning, striking out Garcia, getting Hiura to ground out, and Yelich to pop out to short.

Keller led off the bottom of the third with a single up the middle. Dyson grounds out to second, with Keller moving up a base on the play. Frazier flies out to center. Josh Bell, a day after being named the NL Player of the Week, crushes his fifth home run of the year, giving the Pirates a 2-1 lead. Polanco follows with a single to right. Reynolds strikes out looking to end the inning.

Keller retires the Brewers in order in the fourth, getting another strikeout in the process.

Sogard leads off the inning with a single past a diving Adam Frazier into right field. Houser sacrifice bunts him over to second. A passed ball allows Sogard to go to third base. Keller gets out of the inning with two groundouts.

Keller pops out to start the bottom of the fifth. Dyson flies out to left and Frazier grounds out to short.

Keller gets a quick inning, with two ground outs and a fly out.

Bell grounds out into the shift on the right side. Polanco singles on a hard grounder up the middle. Reynolds singles on a line drive to right field. The ball gets past Avisail Garcia, allowing both runners to move up a base. Newman is intentionally walked to load the bases. Hayes grounds to second, with the throw coming to the plate to get Polanco. Luke Maile singles up the middle, bringing in two runs. Keller strikes out to end the inning.

Keller gets a ground out and a fly out, before hitting Sogard with a 2-2 pitch. Brock Holt! comes in to pinch hit for Houser. He’s batting .385 as a pinch hitter, going 5-for-13 on the season. Holt flies out to center.

The Brewers turn to right-hander David Phelps. Dyson flies out to center. Frazier doubles to left. Bell is intentionally walked. Polanco pops out to the left side of the infield. Reynolds singles through the left side to score a run, with Bell going to third. The Brewers go to J.P. Feyereisen who gets a ground out to second against Newman.

Lorenzo Cain flies out to center. Garcia singles to left. Hiura singles to center. Keller has been efficient since the early innings, and is currently at 78 pitches as he faces Yelich. He strikes out Yelich with a 3-2 pitch, and strikes out Smoak looking to end the inning.

Feyereisen gets Hayes and Maile to fly out, and strikes out Keller.

Keller enters the ninth inning at 89 pitches. Navarez singles to center, and the Pirates turn to Keone Kela as the crowd of 19,094 gives Keller a standing ovation. Urias singles to left. Sogard pops out to third. Ryan Braun enters as a pinch hitter, but Kela strikes him out. Nick Burdi comes on to face Lorenzo Cain. Cain doubles, bringing in a run. Garcia singles to center, cutting the lead to two. Burdi walks Hiura to load the bases for Yelich. Yelich hits a hard grounder to the left side of the infield. Newman makes the routine play, and flips to Frazier at second to end the game. 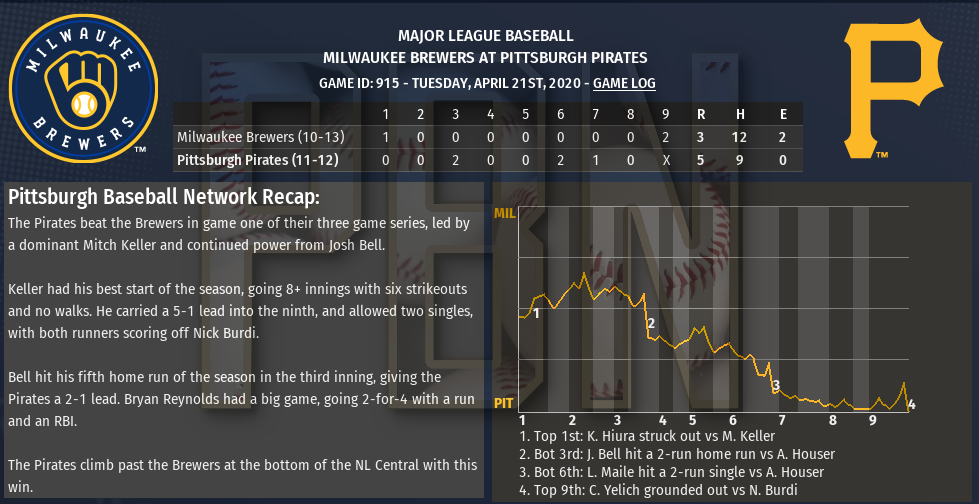 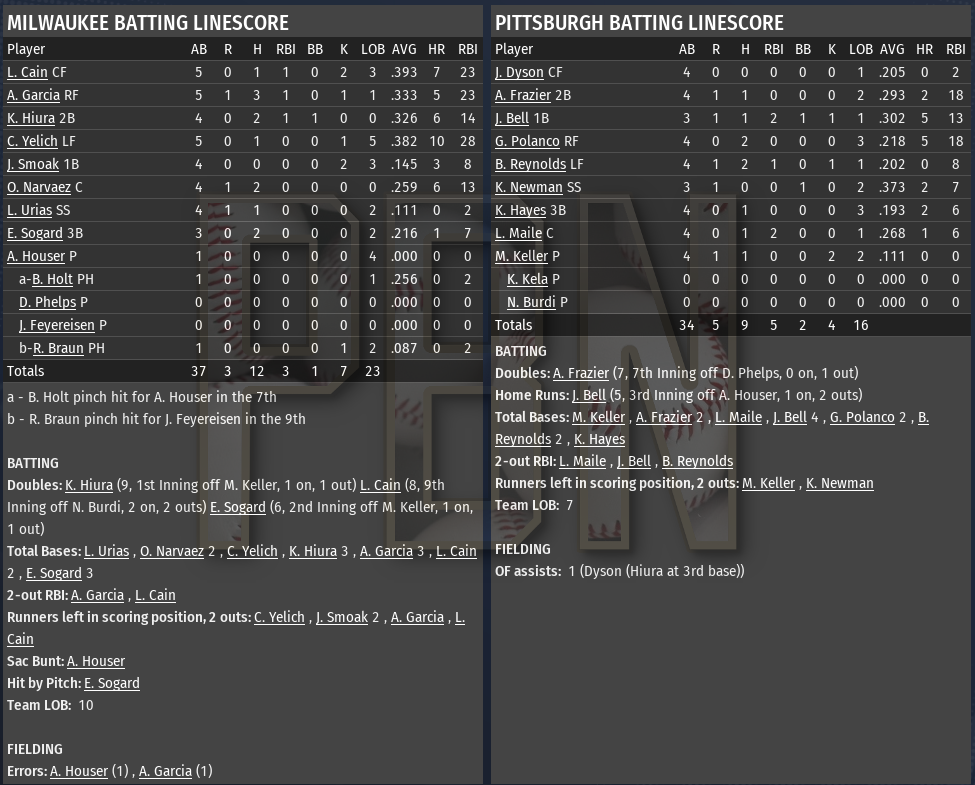 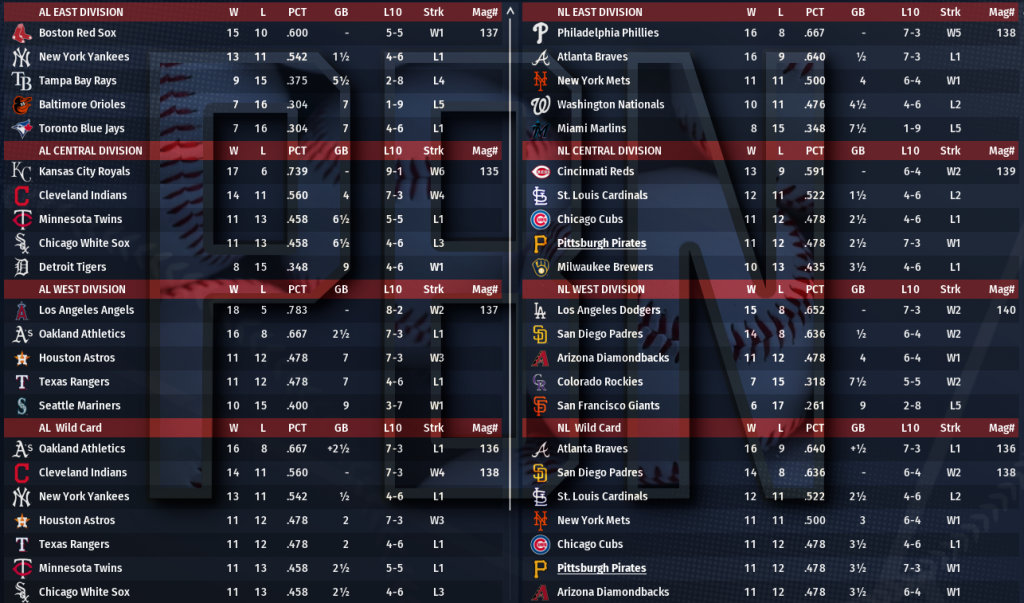 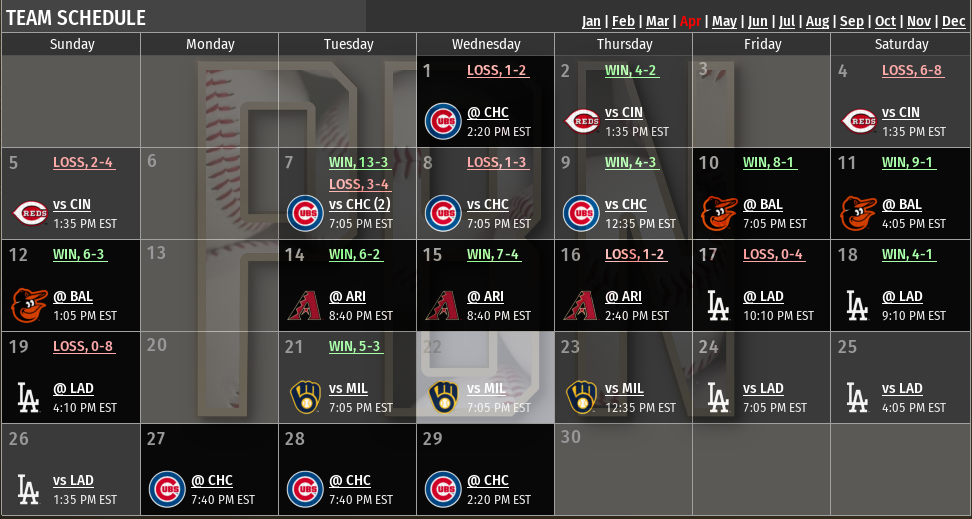