The Pittsburgh Pirates have a day off today in our 2020 simulation, as they head home to take on the Brewers in a three game series this week at PNC Park. Despite the off-day, there was enough Pirates news to do an OOTP style Pirates Notebook.

The biggest news was that Josh Bell was named the National League Player of the Week. Bell hit for a .636 average, a .704 on-base percentage, and three home runs. Bell is also currently sporting a nine game hitting streak heading into the homestand.

The offense from Bell helped the Pirates climb out of the basement in the last week, leading them to four wins in the middle of a stretch where they’ve won 8 of their last 12 games. The Pirates currently sit at 10-12 on the year.

As for Bell, he’s off to a great start on the season, hitting for a .301/.398/.578 line with four homers in 98 plate appearances. Bell currently sits atop the leaderboards for NL first basemen in average, hits, and doubles, and is top three in home runs, OBP, SLG, OPS, and WAR (0.6).

Jacob Stallings Heads to the IL

Pirates catcher Jacob Stallings was diagnosed with a concussion and placed on the 10-day IL. Stallings went down against the Dodgers on Friday night after getting hit in the head with a pitch, which caused him to be removed from the game.

The Pirates have purchased the contract of Andrew Susac from Triple-A Indianapolis. No corresponding 40-man roster move was needed, with one spot left open after Hector Noesi cleared waivers and was outrighted to Triple-A.

Susac is expected to step into the role left by Stallings, sharing the playing time with Luke Maile.

Maile, signed as a free agent by the Pirates heading into the season, is off to a surprising start. He’s hitting for a .270/.386/.405 line with one homer in 44 plate appearances.

They also signed free agent catcher Daniel Comstock to play as the backup in Triple-A with Susac in the majors. Comstock played in the Diamondbacks system as high as rookie ball in 2016. Since then he’s been playing in Indy ball, hitting for a .778 OPS last year. He grades average defensively across the board behind the plate. 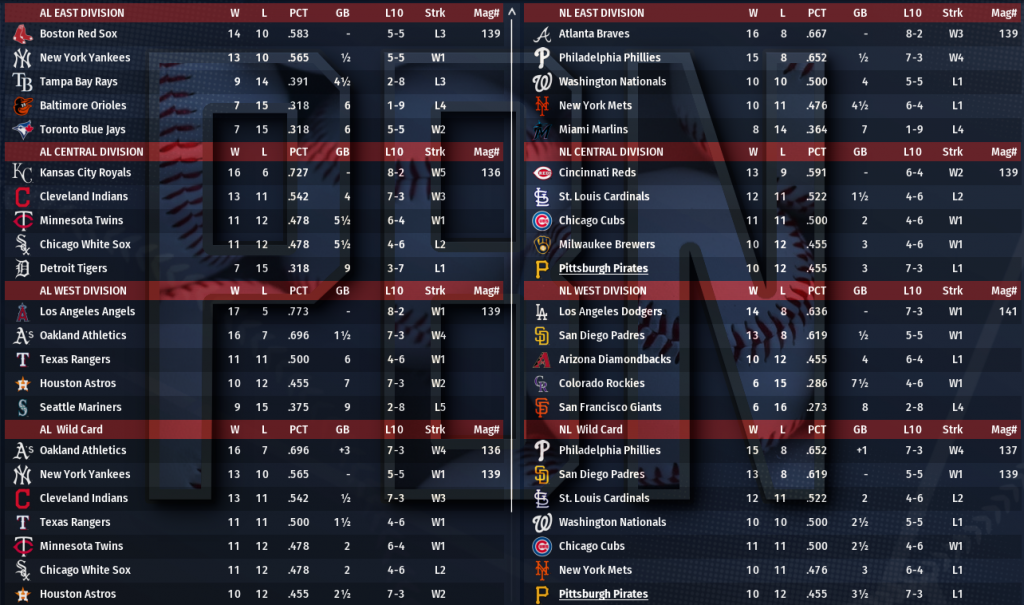 We’ve been running this daily simulation for about a month, and have gotten some good responses so far.

I want your feedback on the format so far. What do you like? What ideas do you have for improvements?

Feel free to be very honest, because the goal here is to provide everyone with articles to look forward to each day while there is no baseball to cover.