OOTP: Pirates Take on Clayton Kershaw in Final Game of Series With the Dodgers

The Pittsburgh Pirates take on the Los Angeles Dodgers today after splitting the first two games of the series. Joe Musgrove (1-1, 2.42) goes up against Clayton Kershaw (1-1, 3.71). 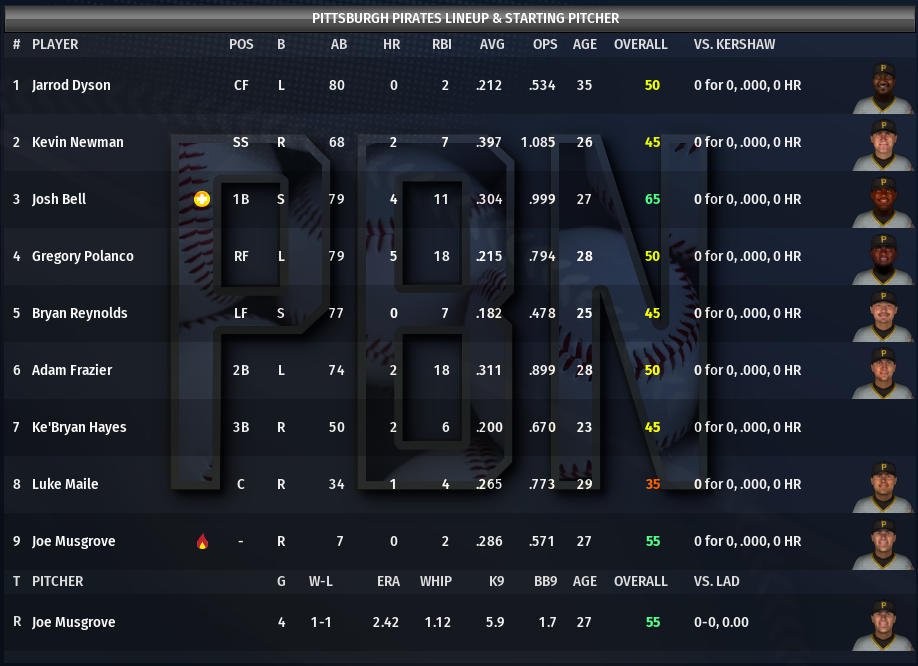 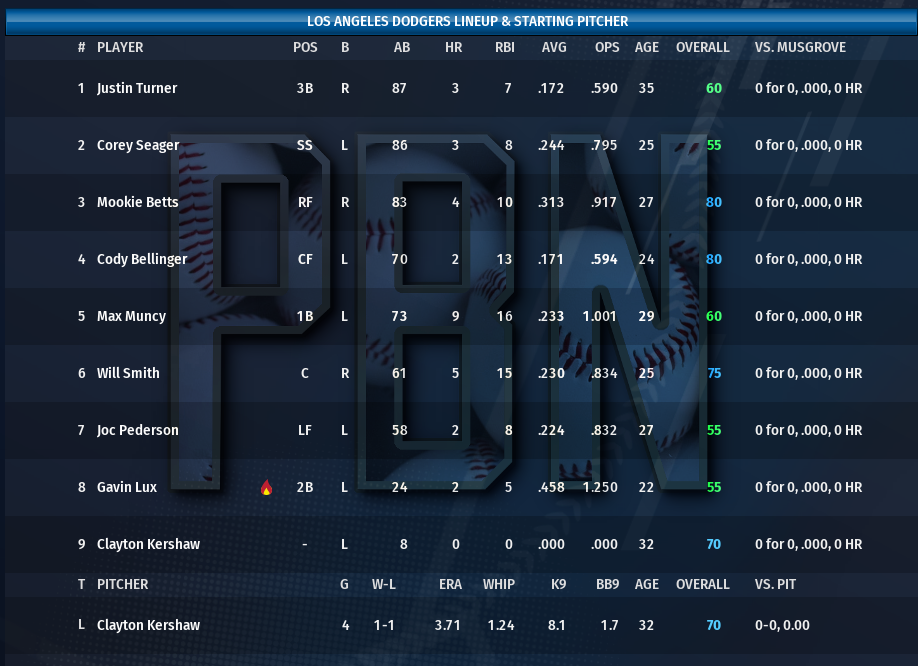 Kershaw set the Pirates down in order, with two ground outs, and a strikeout against Kevin Newman.

Musgrove responded with a fly out to right and a ground out to first. He hit Mookie Betts in the back with a pitch, then Betts stole second. Cody Bellinger hit a two run homer to right to put the Dodgers up 2-0. Max Muncy strikes out to end the inning.

Bryan Reynolds reached base with a one-out single after Kershaw struck out Polanco. Kershaw got Frazier to line out to center, and struck out Hayes to end the inning.

Musgrove had a better inning this time around, with two ground outs and a fly out.

Kershaw got Maile to fly out, and Musgrove and Dyson to ground out.

Kevin Newman reached on an infield single to third base. Kershaw retired the next three batters on a pop out, fly out, and ground out.

Musgrove retired the Dodgers in order, finishing with a strikeout against Joc Pederson.

Kershaw gets Frazier and Hayes to ground out to short to start the inning. Luke Maile hits a two-out double to the left field corner. Musgrove drops a single into left, but Maile is thrown out at the plate.

Gavin Lux pops out, Kershaw strikes out, and Turner grounds out.

Dyson struck out on a check swing. Newman flew out to center. Bell hit a two-out single up the middle. Polanco grounded into a 6-4 fielder’s choice.

Musgrove retired the 2-3-4 part of the Dodgers order with two fly outs and a pop out.

Bryan Reynolds reaches on a throwing error by Corey Seager, which allows Reynolds to advance to second. He moves to third on a ground out by Adam Frazier. Kershaw strikes out Hayes and gets Maile to ground out to short.

Max Muncy starts the inning with a solo homer to right field. Musgrove gets a fly out to center, and strikes Joc Pederson out. Blake Weiman comes in to face Gavin Lux and gets him to ground out to first.

Colin Moran enters as a pinch hitter for Weiman and is struck out by Kershaw. Dyson singles to center, and the Dodgers go to right-handed pitcher Joe Kelly. Newman flew out to center and Bell popped out to short.

Richard Rodriguez comes in to pitch for the Pirates. Tyler White enters as a pinch hitter for Kelly. He singles to left. Turner grounds into a 3-6 fielder’s choice. Seager doubles to left-center, allowing Turner to score from first. Betts singles to bring in another runner. Bellinger singles to right, with Betts going to third. Muncy flies out to right, allowing Betts to score. James Marvel comes in to pitch for the Pirates. He walks Will Smith, then gives up a single to Pederson, bringing in a run. Marvel strikes out Lux to end the inning.

Ross Stripling comes in to close it out for the Dodgers. Polanco flew out to left. Reynolds walks, then moves to second on a wild pitch. Seager makes a nice play to catch a liner, and doubles Reynolds off at second to end the game. 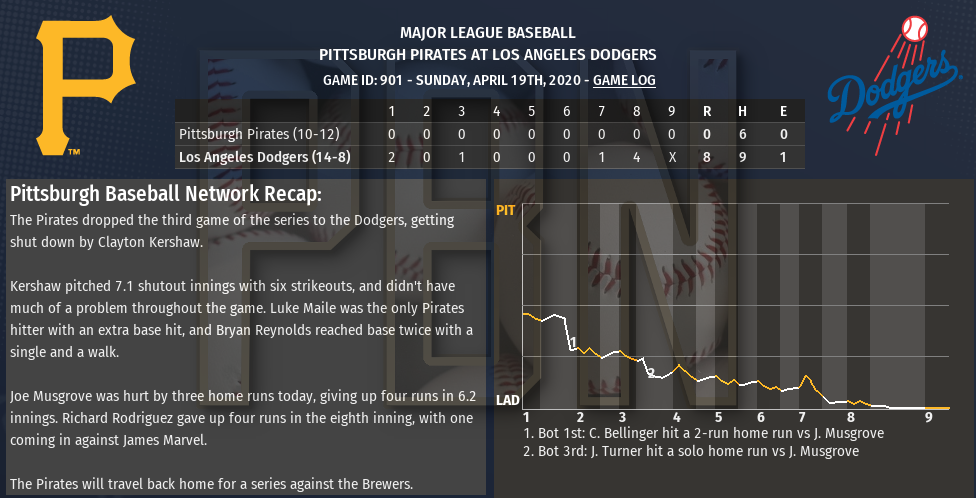 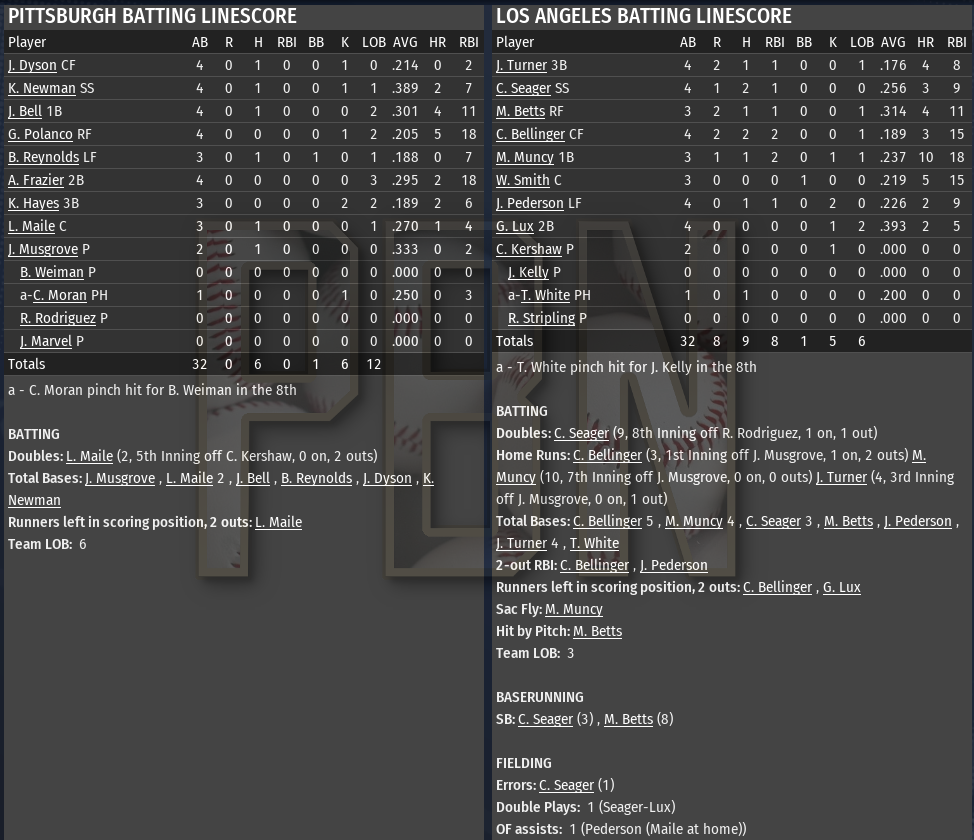 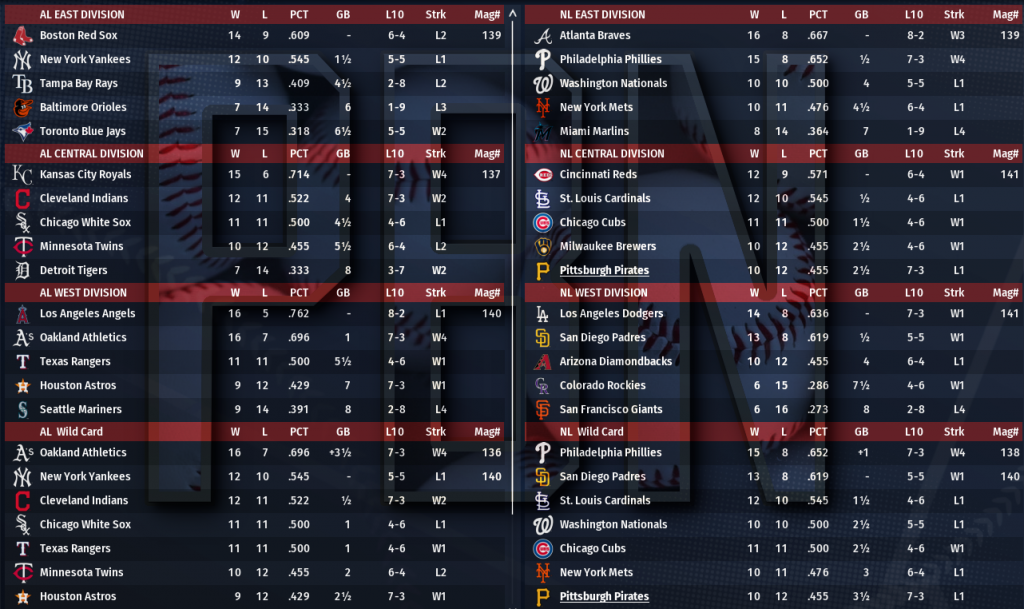 The Pirates are off tomorrow. They return to PNC Park on Tuesday to play a three game series against the Brewers. Here are the times and probable starters:

OOTP: Pirates Open a Two Game Series With the Reds

OOTP: Pirates Go For the Sweep Today Against the Orioles

OOTP: The 2020 Pirates Have a Day Off, But the 2025 Pirates Are Just Getting Started

OOTP: A Look Ahead at How the Pirates Prospects Did in 2024