OOTP: Chris Archer Looks to Get the Pirates Back on Track Against the Dodgers

The Pirates entered their series against the Dodgers as winners of six of their last seven games. They lost the first game of the series in decisive fashion, and will look to even the series today. Chris Archer (2-1, 3.04) takes on Walker Buehler (2-0, 1.88). Archer gave up five earned runs in 4.2 innings in his first start of the year. Since then he has given up three earned runs in 19 innings over three starts. 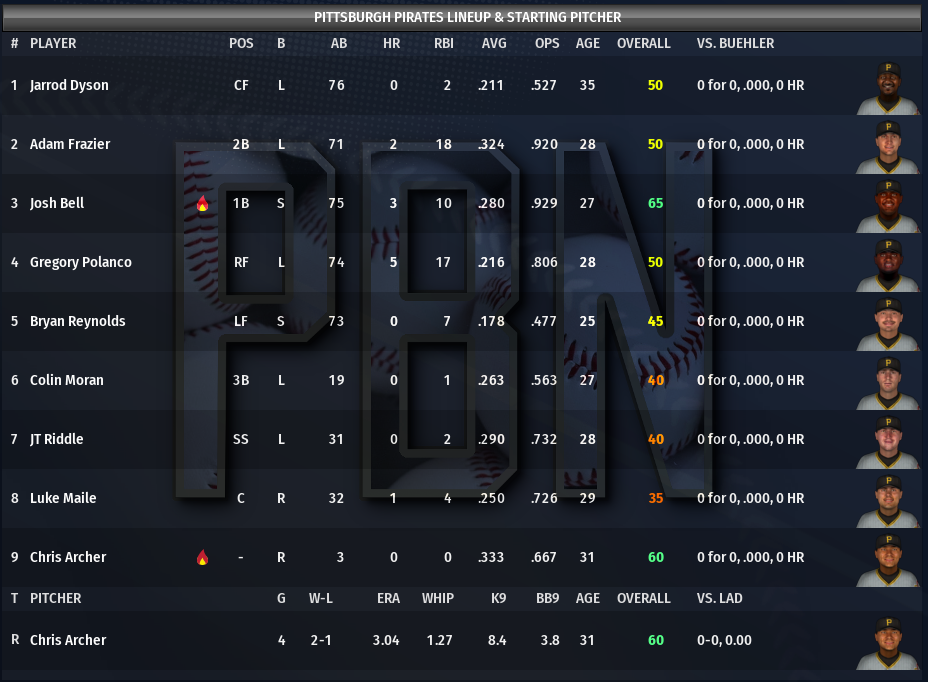 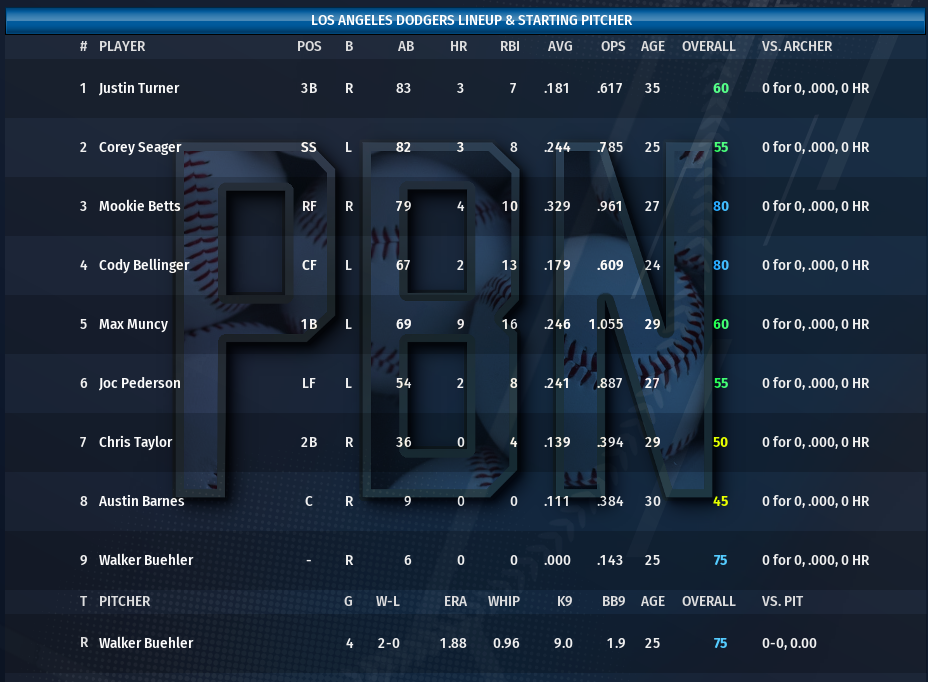 Dyson starts off the game with a walk. Frazier grounds into a fielder’s choice, with Dyson out at second. Josh Bell singles to left, with Frazier stopping at second. Gregory Polanco hits a double to right-center, scoring a run and putting runners at second and third. Bryan Reynolds strikes out. Colin Moran singles up the middle, scoring two runs. Moran moves to second on a passed ball. JT Riddle strikes out to end the inning.

Luke Maile leads off the inning with a walk. Archer sacrifices him over to second with a bunt. Dyson strikes out looking at a changeup. Frazier walks to put runners on first and second. Josh Bell strikes out on an inside fastball.

Archer gets Max Muncy to ground out to second. Joc Pederson flies out to center. Chris Taylor draws a walk, then steals second base. He scores on a single by Austin Barnes. Buehler singles to left, moving Barnes to second. Turner grounds to Newman, who goes to second for the final out.

Gregory Polanco grounds into the shift, with the shortstop fielding the ball directly over the second base bag. Reynolds grounds out and Moran pops out to shallow right field.

Archer got two ground outs before walking Cody Bellinger. He struck out Muncy with a curveball to end the inning.

Riddle grounds out to third. Maile singles through the hole on the left side of the infield. Archer sacrifices him over to second with a bunt. Jarrod Dyson reaches on an infield single, with Maile going to third. Frazier strikes out swinging.

Archer started the fourth with a strikeout against Pederson. Taylor grounded out back to the mound, and Barnes grounded out to third.

Josh Bell beat the shift, hitting a single up the middle that went to the right of the shortstop, who was playing on the first base side of the bag. Polanco grounds into a shifted 4-6-3 double play. Bryan Reynolds strikes out.

Archer strikes out Buehler and Turner to start the fifth inning. Seager flies out to center field to end the quick inning.

Colin Moran strikes out and JT Riddle pops out to first to start the inning. Maile draws a walk on four pitches. Archer grounds into a fielder’s choice, 5-4 putout.

Archer gets Betts to fly out to center to start the sixth inning. Bellinger grounded out and Muncy flew out to left.

The Dodgers bring in left-handed pitcher Adam Kolarek. He gets Dyson to ground out and Frazier to fly out. Josh Bell follows with his fourth home run of the year. Polanco strikes out to end the inning.

Michael Feliz comes on in relief of Archer. He gets Pederson to fly out to center. Chris Taylor strikes out. Austin Barnes draws a walk on a high, 3-2 pitch. The Dodgers pinch hit Tyler White for Kolarek. White grounds out to short.

Right-handed pitcher Pedro Baez comes in to pitch. Reynolds starts off with a single. Moran strikes out and Riddle flies out. Maile strikes out looking at a slider to end the inning.

Feliz returns to the mound in the eighth and gets Turner to pop out to shallow right field. Seager grounds out to first. Betts strikes out on a 95 MPH fastball to end the inning.

Kevin Kramer enters the game as a pinch hitter and flies out to left. Jarrod Dyson grounds out. Frazier draws a walk, bringing up Josh Bell. Baez hits Bell in the hand with a pitch and Bell is removed from the game. Guillermo Heredia comes in as a pinch runner. Polanco strikes out looking.

Nick Burdi comes in to close it out for the Pirates. He starts the inning with a strikeout against Bellinger. Muncy pops out to Kevin Kramer, who replaced Bell at first base. Joc Pederson flies out to right-center to end the game. 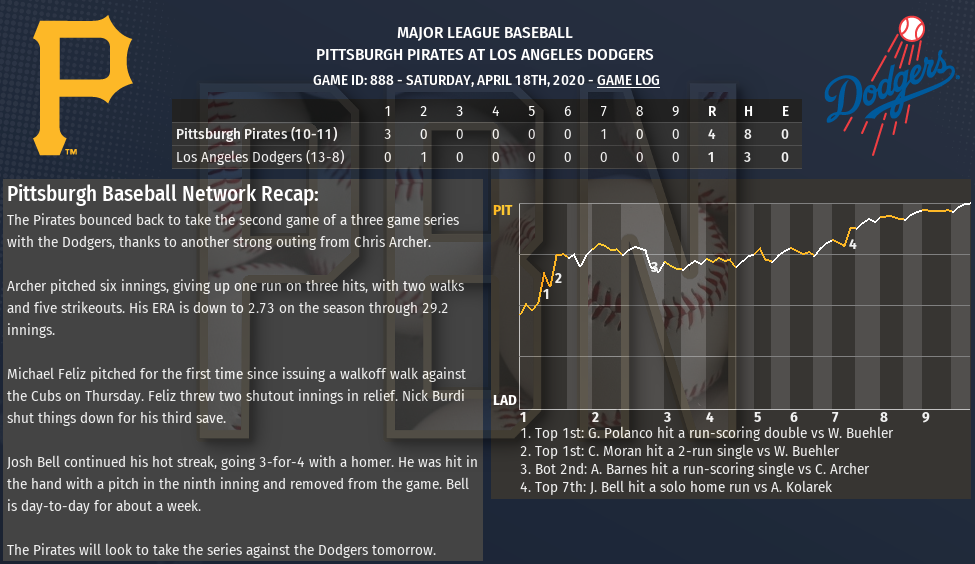 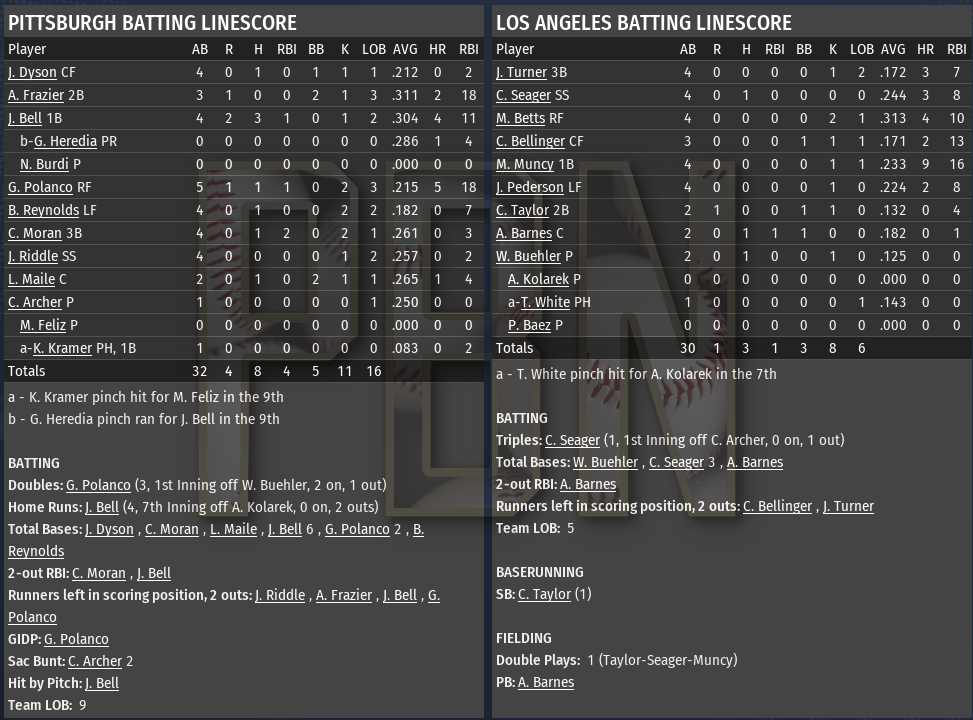 Bell is listed as day-to-day for five days with a minimal injury. 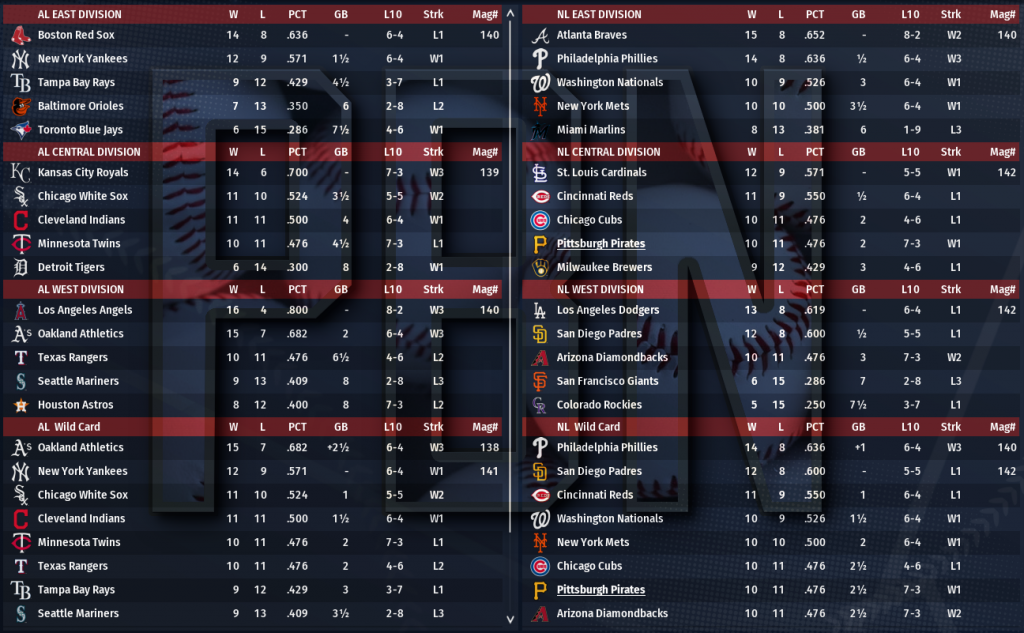