OOTP: Pirates Face Their Biggest Test of the Season Against the Dodgers

The Pirates have been surging lately, winning six of their last seven games. They face one of their biggest tests of the season this weekend, going up against the Dodgers. The series comes at the end of a nine-game road trip, with six of those games on the west coast. 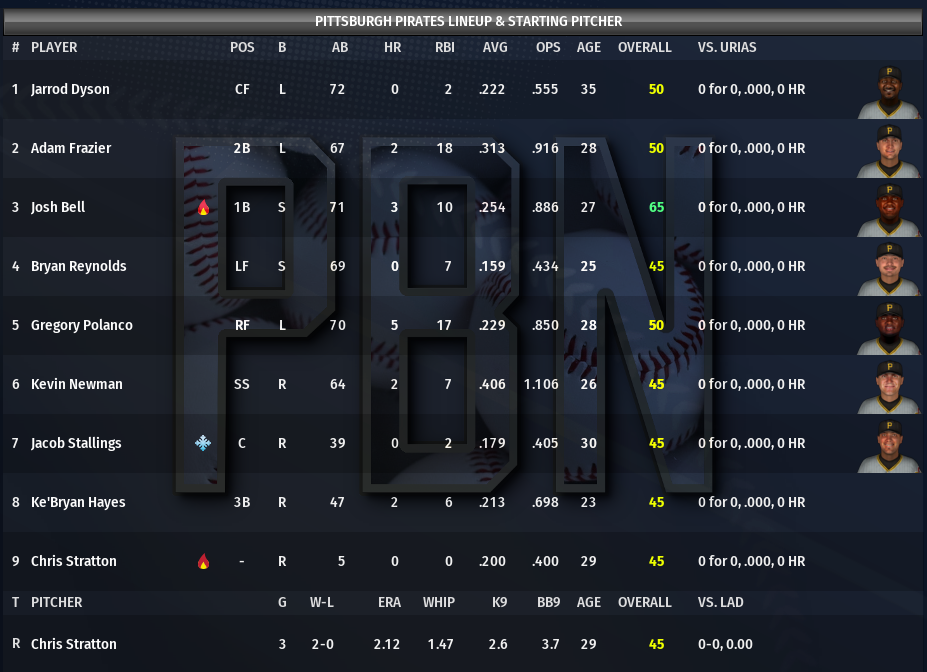 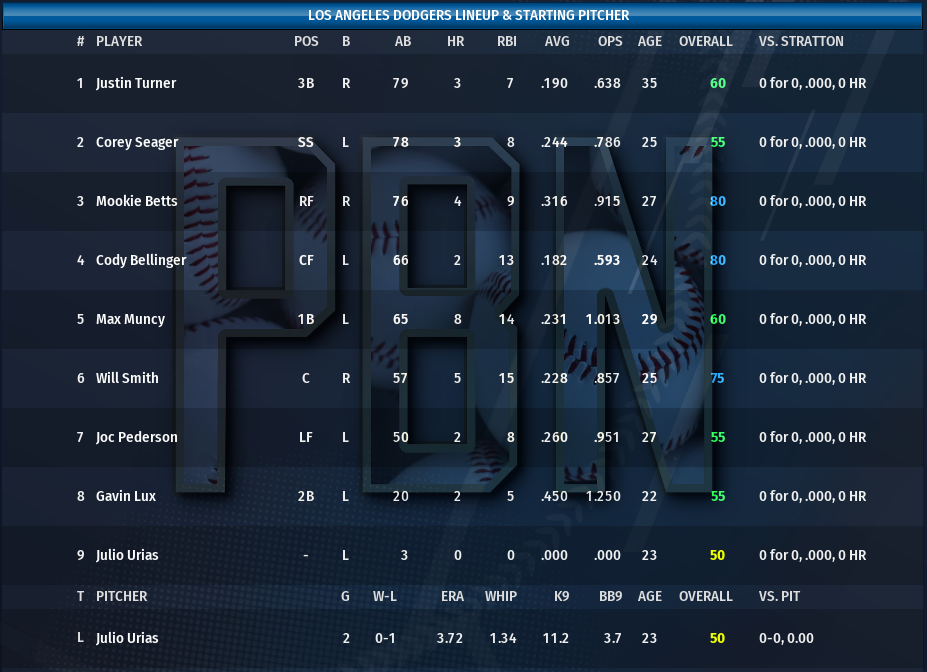 Dyson grounded out to second to start the game. Frazier hit a line drive to right field, which was caught by Betts on a nice play. Josh Bell hit a single through the hole on the left side of the infield. Bryan Reynolds doubles to left-center, putting runners at second and third. Polanco grounds out to second.

Stratton got a fly out to left and a pop out to third before walking Betts. He got Bellinger to fly out to center.

Kevin Newman flew out to right field. Jacob Stallings was hit with a pitch in the head and removed from the game. Guillermo Heredia enters as a pinch runner. Hayes grounds out and Stratton flies out to end the inning.

Luke Maile enters the game to replace Stallings. Max Muncy took a 3-1 pitch over the right field fence for the first run of the game. Stratton gets a strikeout and a fly out, before a Gavin Lux double to right. Urias singled up the middle and Lux beat Dyson’s throw to score the second run. Turner grounds out to second.

Dyson grounded out to second and Frazier struck out looking. Josh Bell hit a double down the right field line. Reynolds singles up the middle, but Bell is thrown out at the plate.

Stratton retired Seager with a strikeout and Betts with a fly out to center. After a walk to Bellinger, Stratton got Muncy to ground out to end the inning.

Gregory Polanco grounded out to start the inning. Kevin Newman hit a double to right-center. Maile flew out to center and Hayes struck out.

Will Smith singles through the left side of the infield. With the Pirates shifted to the right, Joc Pederson grounds into a 4-6-3 double play. Lux struck out to end the inning.

After two quick outs, Adam Frazier reached on a bunt single. Josh Bell grounded out into a 6-4 fielder’s choice.

Stratton got Urias and Turner to ground out to start the inning. Seager doubles down the line in left. Betts doubles to left-center, scoring a run. Bellinger walks, putting runners at first and second. Muncy drops a single into right field, allowing Betts to score. A wild pitch puts runners in scoring position. Stratton strikes out Will Smith to end the inning.

Urias made quick work of the Pirates in the sixth, getting a ground out, a strikeout, and a fly out.

Richard Rodriguez comes on in relief for the Pirates. He starts by striking out Pederson. Gavin Lux singled to left. Urias sacrificed him over to second with a bunt. Rodriguez hits Justin Turner with a pitch, putting runners on first and second. Seager grounds out to second.

Maile flew out to center, Hayes lined out to second, and Kevin Kramer struck out as a pinch hitter for Rodriguez.

Dovydas Neverauskas enters the game for the Pirates. Betts leads off with a double, and Bellinger is intentionally walked. Neverauskas strikes out Muncy. Betts steals third on a 1-0 pitch. Smith strikes out and Pederson grounds out to end the inning.

The Dodgers bring in left-handed pitcher Caleb Ferguson to replace Urias, facing the top of the Pirates’ lineup. Dyson strikes out swinging at a 98 MPH fastball. Frazier and Bell hit back-to-back singles up the middle, putting runners at first and second. Reynolds strikes out and Polanco flies out to right.

Right-handed pitcher Zach McAllister comes in to close it out for the Dodgers. Newman grounds out back to the mound. Maile grounds out to short. Hayes draws a walk on a 3-2 pitch to keep the Pirates alive. Colin Moran enters as a pinch hitter and pops out to end the game. 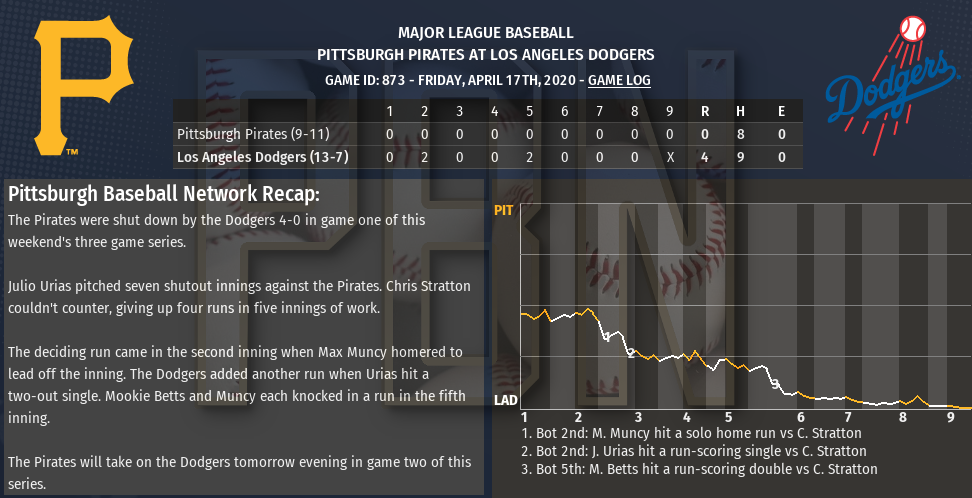 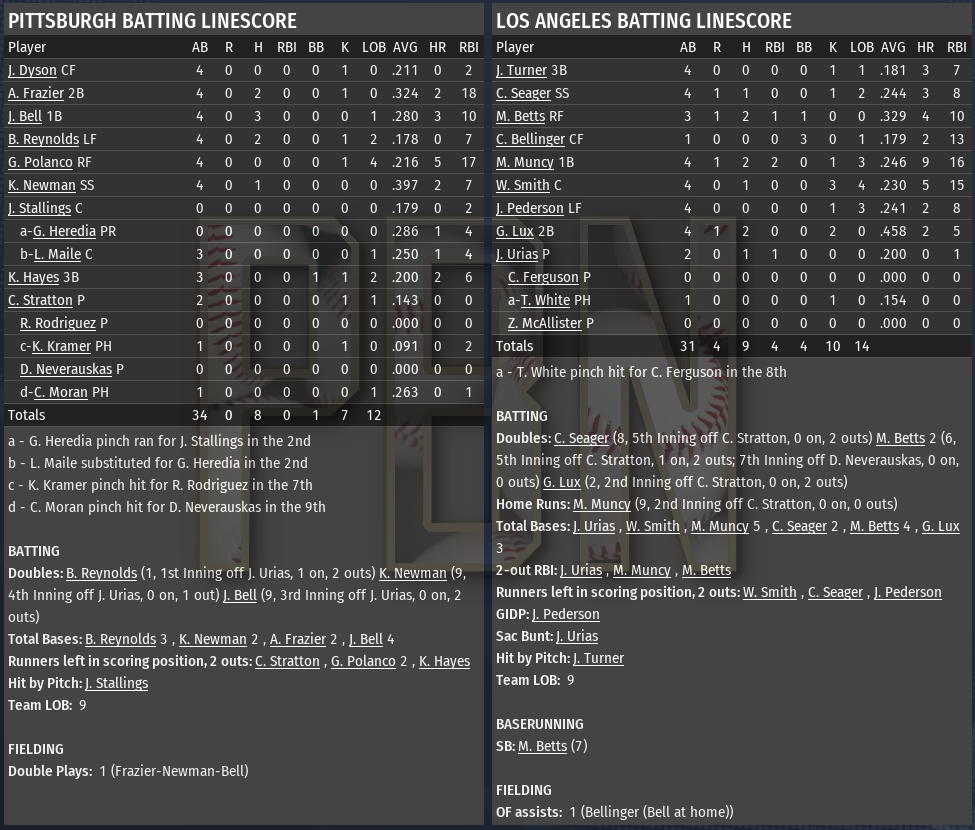 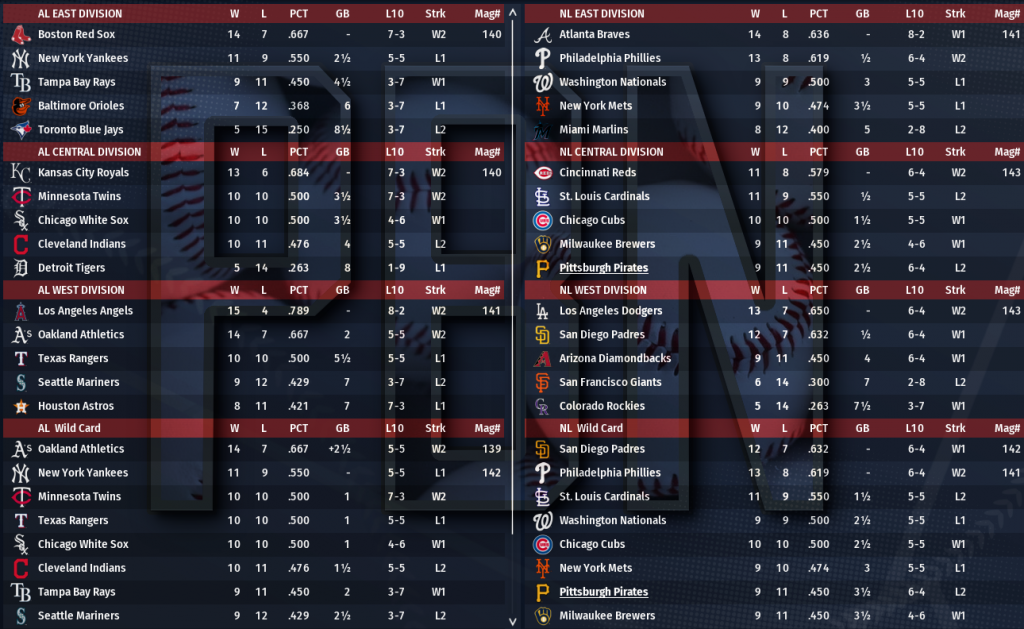 The Pirates resume their series against the Dodgers tomorrow. Chris Archer (2-1, 3.04) will take on Walker Buehler (2-0, 1.88). Here are the probable starters for Sunday’s game:

OOTP: Pirates Try to Take Series Against Cardinals With Keller on the Mound

OOTP: Quinn Priester is in the Pirates Rotation By the End of the 2023 Season

OOTP: Mitch Keller Makes His Season Debut as the Pirates Try to Avoid a Sweep Against the Rays

OOTP: Mitch Keller Takes the Mound on His 24th Birthday