OOTP: Pirates Go For the Sweep Against the Diamondbacks

The Pirates have been surging lately, winning their last six games to pull themselves up to .500. They’ve been led by some strong offense lately, with Gregory Polanco homering in four straight games entering today’s game.

Trevor Williams will take on Robbie Ray, hoping to pull of the sweep against Arizona. 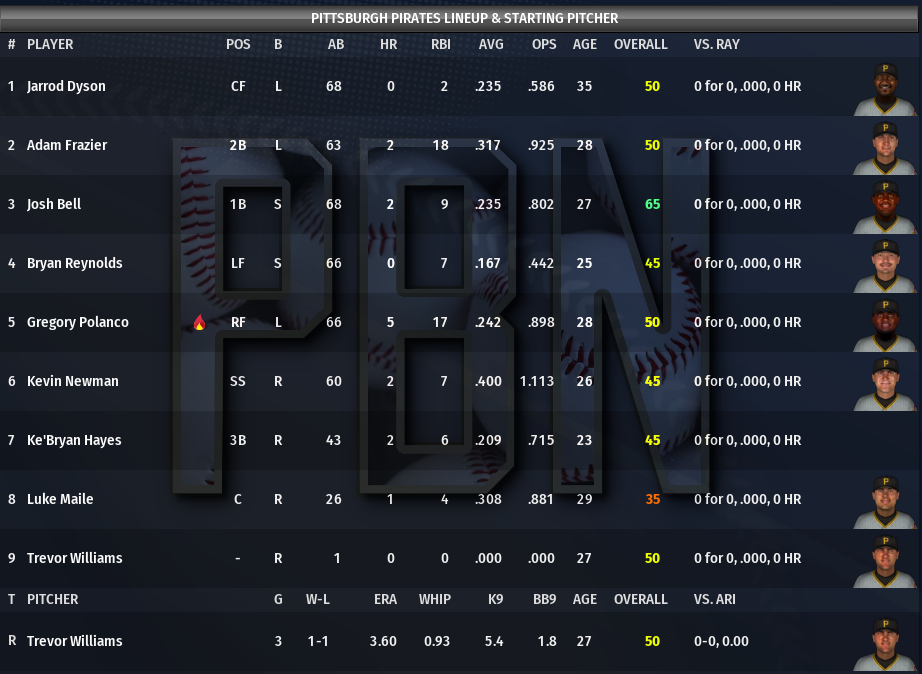 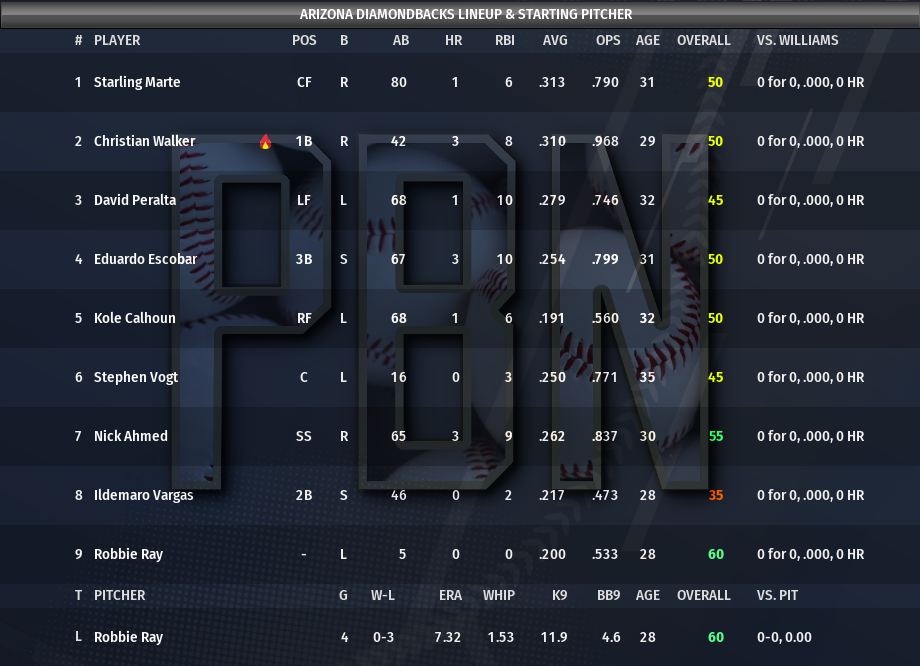 Dyson strikes out on a check swing to start the game. Frazier grounds out to third. Bell strikes out to end the inning.

Marte grounds out to Newman for the first out. After a second ground out, Trevor Williams gives up a double to David Peralta. Escobar singles to right, with Peralta moving to third. Calhoun flies out to right to end the inning.

Robbie Ray got Reynolds and Polanco to fly out, and Newman to ground out to short.

Ke’Bryan Hayes leads off the third by reaching on an infield single. Maile flew out to left-center field. Williams bunted Hayes over to second. Dyson grounded out.

Williams had a quick inning, getting two ground outs to third, and a fly out to left.

Frazier grounds out to second to start the inning. Josh Bell doubles to the left field corner. Reynolds takes ball four on a payoff pith outside. Polanco strikes out on a curveball in the dirt. Ray is called for a balk, moving runners to second and third. Newman flies out to right to end the inning.

Williams almost had another quick inning, getting a first pitch flyout, and a three pitch strikeout. He got a grounder to second, but the throw to first from Frazier went high. That allowed Stephen Vogt to advance to second. Williams gets Ahmed to fly out to right for the third out.

Ray had a quick inning against the bottom of the order, with a fly out, a pop out, and a strikeout against Williams.

Williams continued to roll, getting a fly out and two ground outs for another quick inning.

Ray strikes out Dyson and gets Frazier to ground out to start the inning. Josh Bell, batting right-handed, took the first pitch 425 feet over the left-center wall to give the Pirates the lead. It was Bell’s third homer of the year. Reynolds strikes out to end the inning.

Williams continues to cruise, with a fly out and two ground outs.

Polanco strikes out looking to start the inning. Right-handed pitcher Josh Green comes in to replace Ray. Newman singles on a line drive to left. Hayes grounds out to first, with Newman moving to second. Maile grounds out to third to end the inning.

Williams enters the seventh inning sitting at an impressive 62 pitches. He starts the inning by striking out Calhoun on three pitches. Vogt popped out on the first pitch he saw. Ahmed singled to center. Vargas flew out to center field to end the inning.

Trevor Williams remains in the game for the Pirates and flies out to center. Dyson flies out to left. Frazier doubles down the third base line. Bell is intentionally walked. Reynolds strikes out to end the inning.

Jake Lamb comes on as a pinch hitter and rips a double down the line in right. Williams gets Marte to ground out to short, with Lamb moving to third. Christian Walker strikes out looking for the second out. Peralta draws a walk, putting runners at the corners. Escobar hits an RBI single to left, but Peralta is thrown out at third by Polanco to end the inning.

Archie Bradley comes on to pitch for the Diamondbacks. He strikes out Polanco to start the inning. Newman singles between the third baseman and shortstop. Hayes flies out to left. Colin Moran enters as a pinch hitter for Maile and strikes out.

Williams returns to the mound for the ninth inning. After getting Calhoun to fly out to center, he gave up a double to Vogt down the third base line. Ahmed is intentionally walked, and Michael Feliz comes on in relief. Feliz walks Vargas to load the bases. Tim Locastro comes in to pinch hit for Bradley with one out. Feliz walks him to end the game. 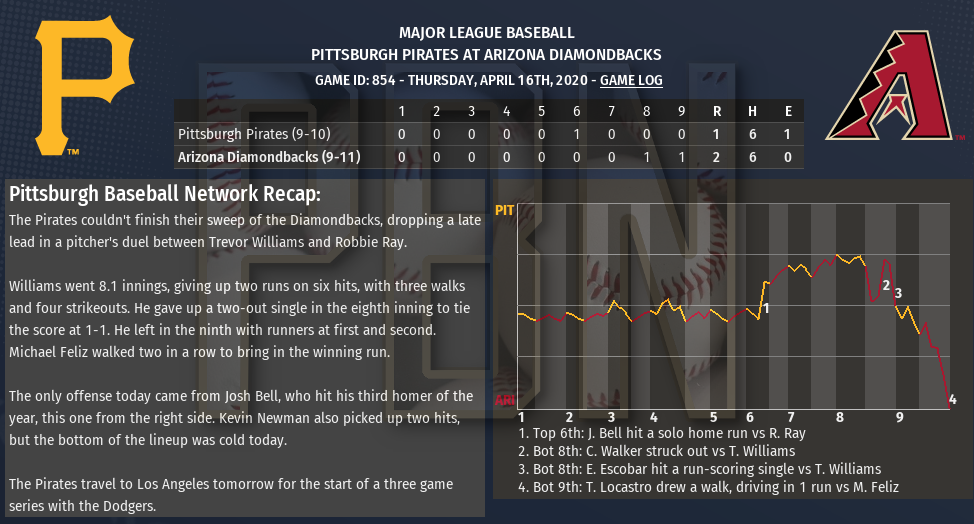 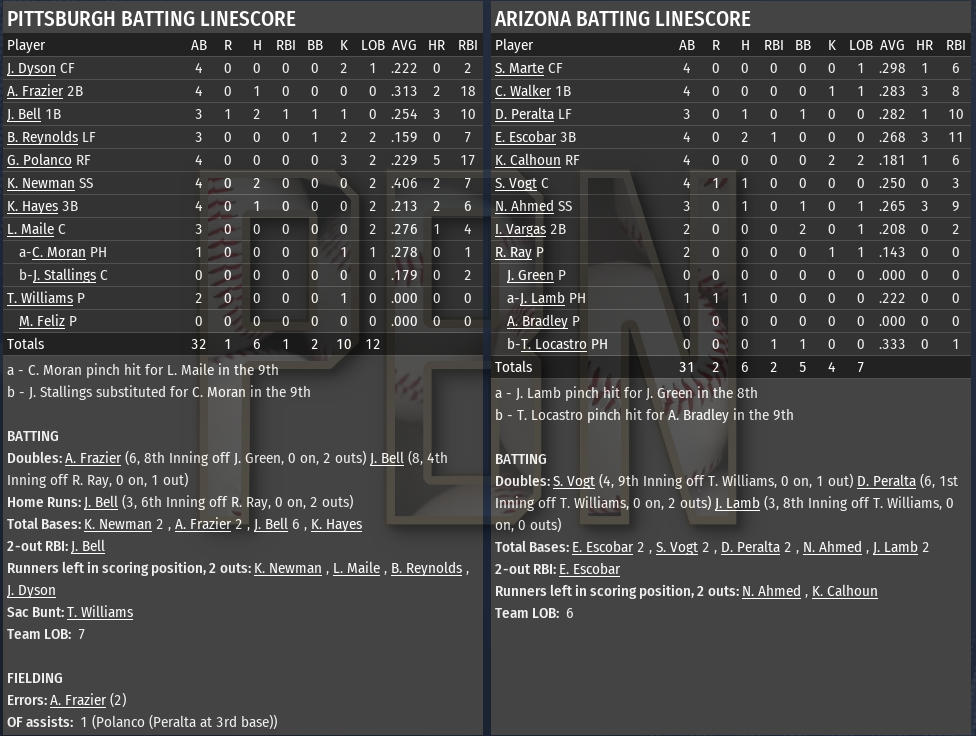 Josh Bell and Kevin Newman each have eight doubles, which is tied with a few other players for best in the league. Newman ranks fifth in the NL in average at .406, and sixth in OBP at .449. 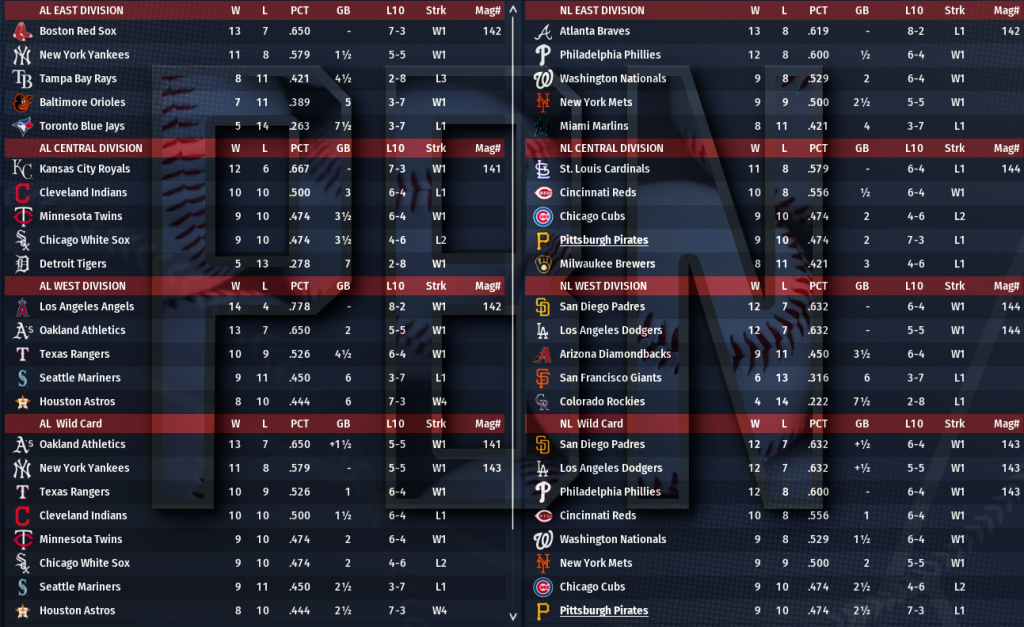 The Pirates travel to Los Angeles for a three game series, starting tomorrow. Here are the game times, and the probable starters: