OOTP: Pirates Could Climb Back to .500 With a Win Against Arizona Tonight

Things didn’t look good in the first few weeks of our 2020 Pittsburgh Pirates simulation. The Pirates started off 3-9, with mixed pitching results and the offense squandering plenty of opportunities along with way.

The Pirates have surged in the last week, winning five in a row. They enter tonight’s game with a chance to climb back to .500. Adam Frazier carries a 13-game hitting streak into the game, and Gregory Polanco’s bat has been heating up lately to help fuel the offense. 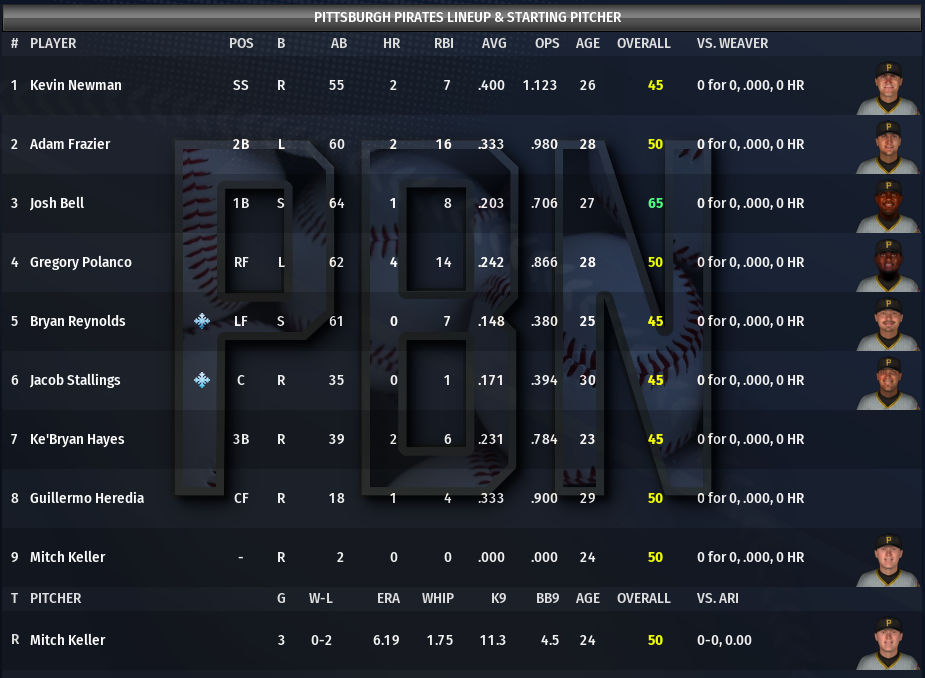 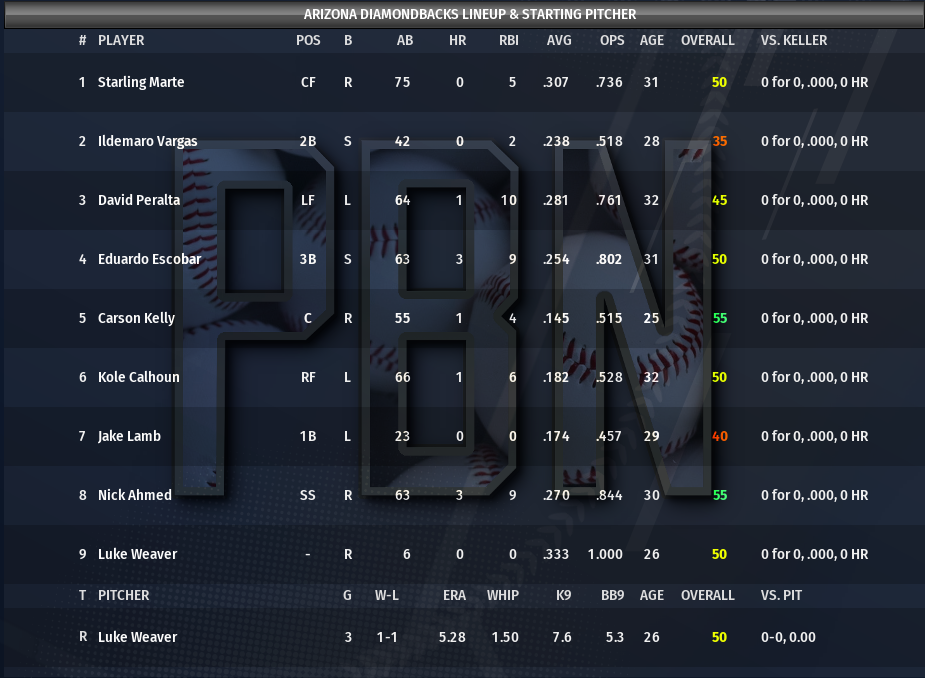 Kevin Newman grounded to third to start the game. The throw from Escobar was high, allowing Newman to reach safely and take second. A wild pitch allows Newman to move to third. He scored on a sacrifice fly to left by Adam Frazier. Josh Bell homers to right field, adding a second run. Gregory Polanco draws a walk on an inside 3-2 pitch. Bryan Reynolds hits a slow roller past the mound that Ahmed can’t make a play on, putting runners at first and second. Stallings flew out to right and Hayes struck out.

Starling Marte leads off the game against Mitch Keller by lining the first pitch to right field for a double. Vargas grounds out to third, with Marte holding. Peralta singles to left, with Marte moving to third. Escobar hit a double just out of the reach of Heredia, bringing in a run and putting runners at second and third. Carson Kelly brings in the second run of the inning with a sacrifice fly to center field. After walking Calhoun, Keller struck out Lamb.

Guillermo Heredia led off the inning with a ground out. Mitch Keller struck out, but advanced to first on a wild pitch. Kevin Newman hits a double off the wall in right-center, moving Keller to third. Adam Frazier hit a sacrifice fly to right, with Keller scoring on the play to give the Pirates the lead. Josh Bell struck out to end the inning.

Keller walked Nick Ahmed. Luke Weaver bunted Ahmed over to second. Keller got Marte and Vargas to ground out to end the inning.

Polanco leads off the inning by popping out in the infield. Bryan Reynolds hits a line drive to deep center field for a triple, his second of the year. Stallings singles to left to bring in a run. Hayes grounded into a fielder’s choice, with Stallings out at second. Heredia strikes out looking.

Keller made quick work of the Diamondbacks in the third, getting three straight ground outs to Newman at short.

Keller flies out to right field. Newman singles. Frazier flies out to center. Bell beat the shift with a grounder to third base. Escobar stopped it on a dive, but couldn’t make a play, leaving runners at first and second. Gregory Polanco homers to right field to break the game open for the Pirates. Arizona goes to right-handed pitcher Kevin McCanna, who gets a strikeout to end the inning.

Keller gets a fly out to center for the first out. Jake Lamb doubles to right-center. Ahmed grounds out to short. The Diamondbacks stick with McCanna, who grounds out back to the mound.

Stallings struck out, Hayes lined out to first, and Heredia grounded out to second for a quick inning.

Marte leads off the bottom of the fifth with an opposite field home run. Keller follows that with a fly out to center and two strikeouts.

McCanna strikes out the side, setting down Keller, Newman, and Frazier in order.

Keller started the sixth with a strikeout. After giving up a single to Calhoun, he got a 4-6-3 double play to end the frame quickly.

Edgar Santana comes on to face the bottom of the Arizona lineup. Santana strikes out Ahmed to start the inning. Christian Walker comes on to pinch hit and grounds out to short. Marte flew out to center for the third out.

Arizona brings in right-handed pitcher Yoan Lopez. He gets Hayes to line out to second base. Heredia draws a walk, and Kevin Kramer comes in to pinch hit for Santana. Kramer strikes out for the second out. Newman strikes out looking to end the inning.

Keone Kela comes on in relief for the Pirates. He gets Vargas to ground out back to the mound. Peralta pops out to short, and Kela strikes out Escobar to end the inning.

Adam Frazier leads off the inning by grounding out to the mound, likely ending his hitting streak at 13 games. Josh Bell beats the shift again, dropping a single into center field between the shortstop and center fielder. Hector Rondon comes in to pitch for Arizona. He gets Polanco to fly out and Reynolds to strike out.

Kela returns for the ninth inning. After getting Kelly to fly out, he issued back-to-back walks. Nick Burdi comes on in relief and walks Ahmed to load the bases. Arizona brings in left-handed batter Stephen Vogt to pinch hit. Burdi throws a ball that gets past Stallings, bringing in a run and moving the runners to second and third. Burdi recovers by striking out Vogt and getting Marte to fly out to center to end the game. 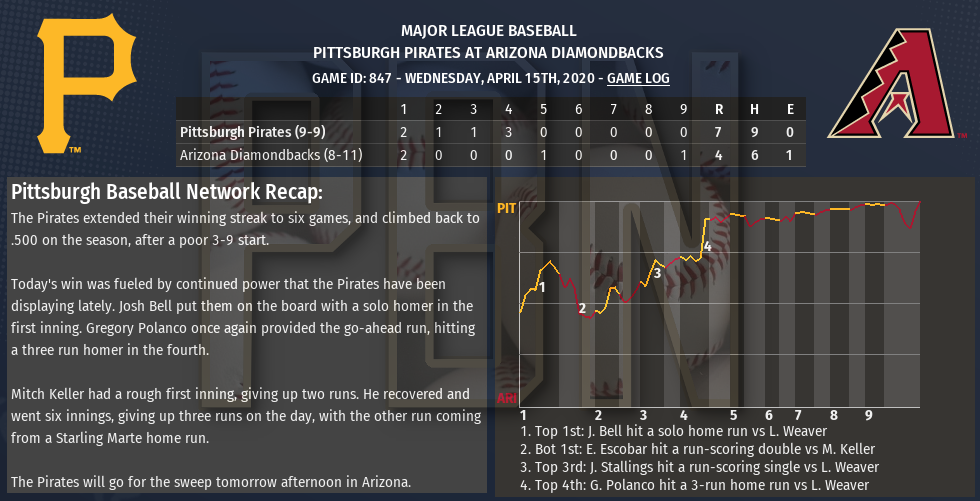 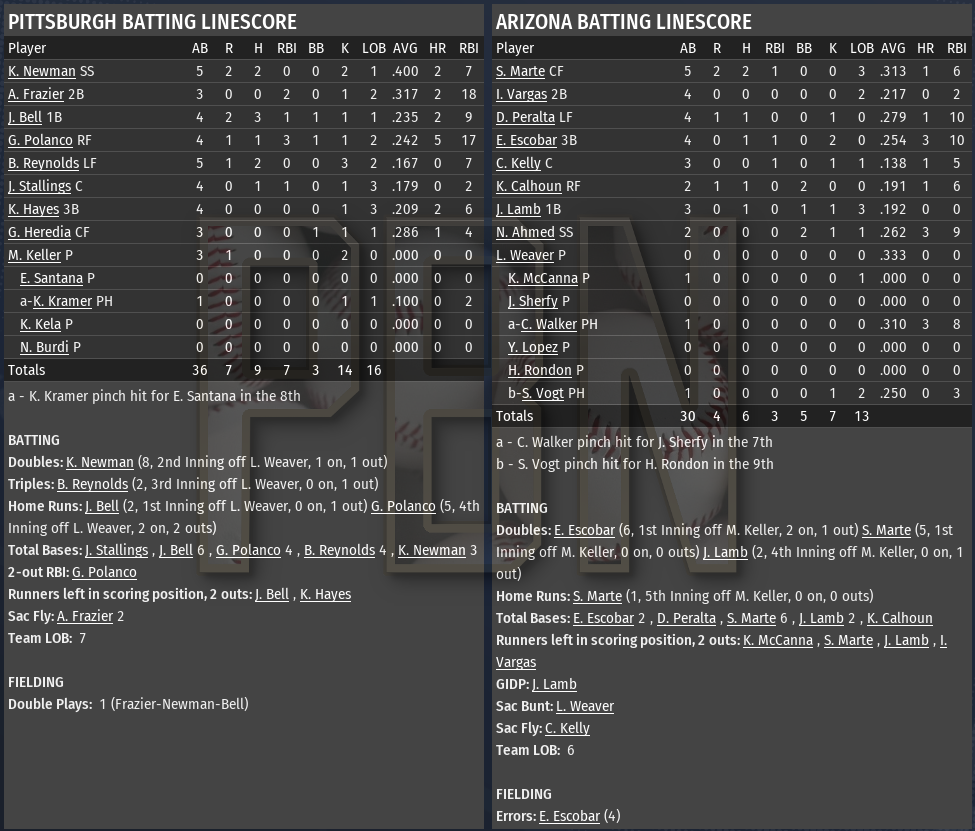 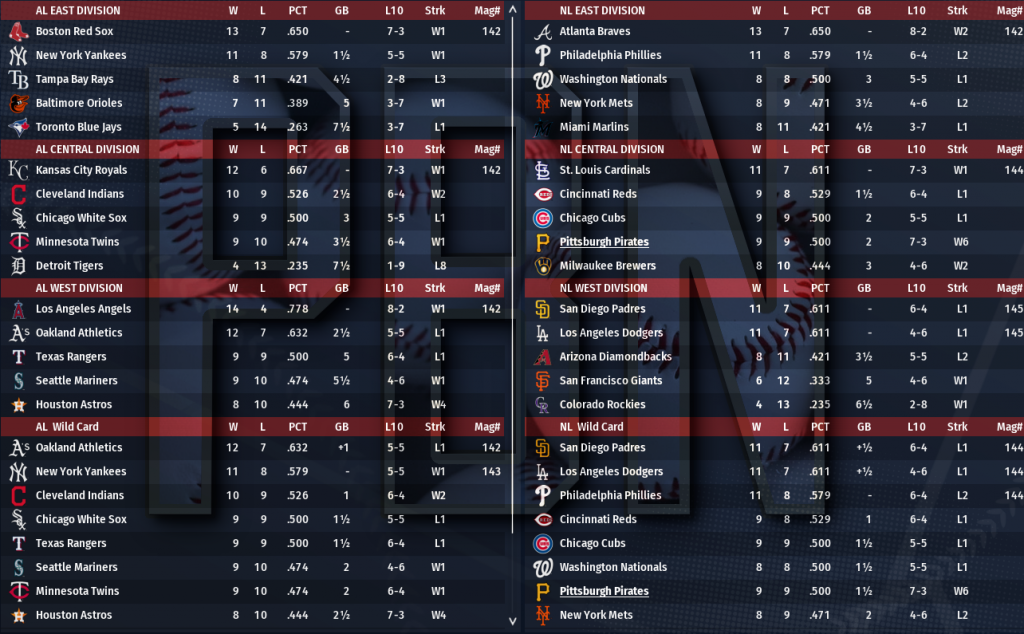 The Pirates will go for the sweep tomorrow, and will also try to climb above .500 for the first time this season.