OOTP: Pirates Face Starling Marte For the First Time in Series Opener Against the Diamondbacks

The Pirates take on the Diamondbacks tonight in the start of a six-game, west coast road trip. They’ll go up against a few familiar faces.

Starling Marte was the expected familiar face, and will be leading off for the Diamondbacks. I was surprised to see former Pirates prospect Wyatt Mathisen in the lineup. This is actually Mathisen’s MLB debut. He was called up by Arizona after Kevin Cron started the season with a .179/.258/.393 line.

In real life, Mathisen had a bit of a breakout season last year in Arizona’s system. He hit for a .283/.403/.601 line with 23 home runs. The power increase could have been due to park factors, and I was interested in following the real-life Mathisen this year to see if his numbers could be legit. I guess we’ll have to follow the simulated version instead. 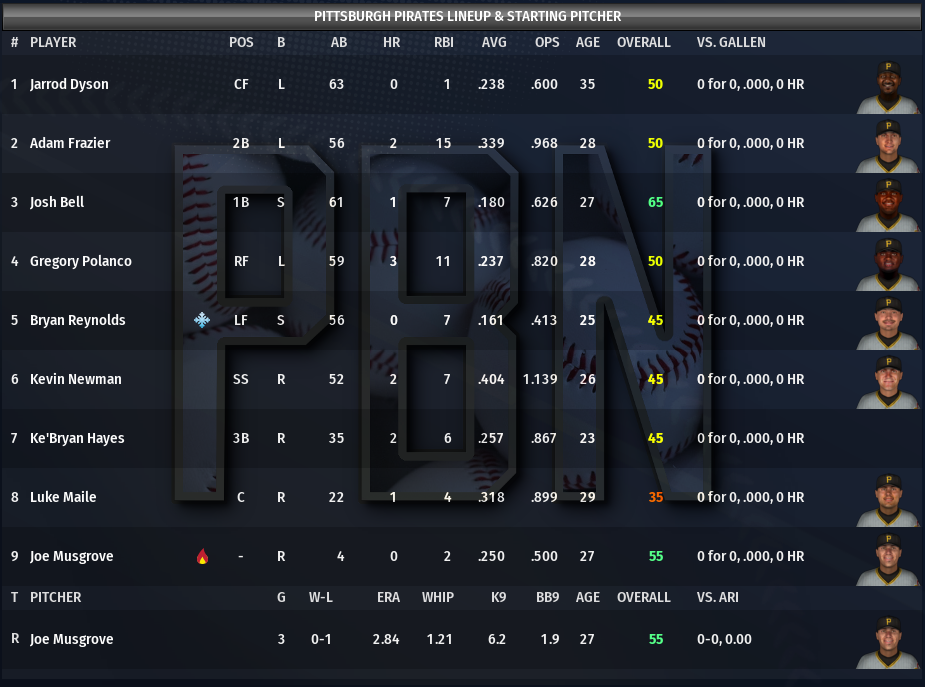 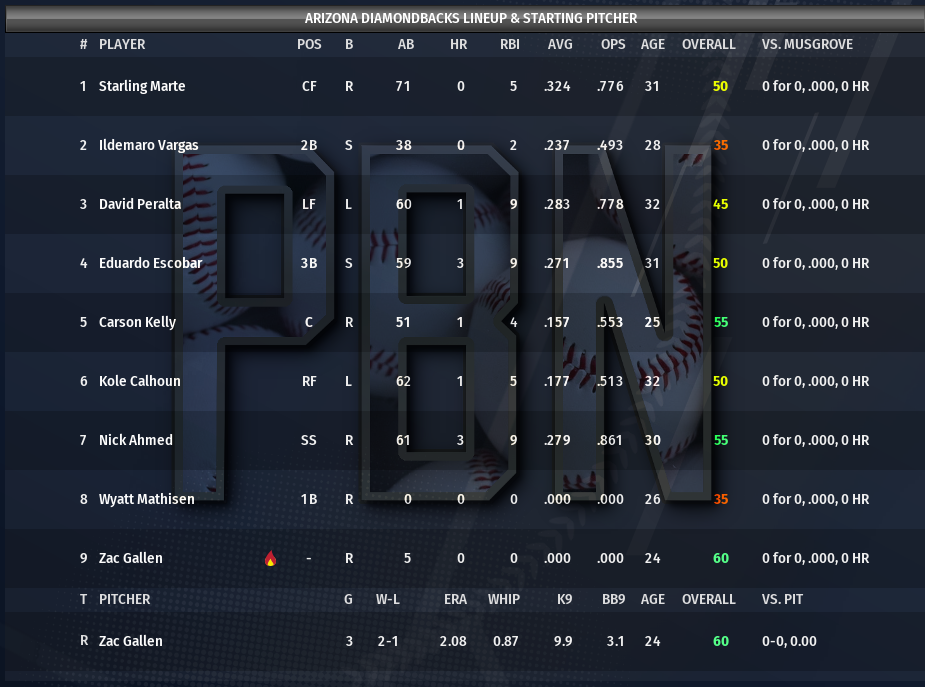 Dyson tried to reach on a bunt, but was thrown out at first by a step. Frazier drew a walk. Josh Bell followed with a triple to the right-center gap, bringing in the first run. Gregory Polanco hit his fourth home run of the year, putting the Pirates up 3-0. Reynolds struck out swinging. Newman walked with two outs. Hayes grounded into a fielder’s choice to end the inning.

Musgrove gets Starling Marte to ground out to first. Ildemaro Vargas doubled off the wall in left field. David Peralta brought him in with an RBI single up the middle. Peralta took second on the throw to the plate. Dyson caught a fly out in center field, showing a lot of range on the play. Musgrove got a pop out to first to end the inning.

Maile grounded out, Musgrove flew out to left, and Dyson struck out swinging for a quick second inning.

Musgrove started the bottom half of the inning with a strikeout against Kole Calhoun. Nick Ahmed walked. Wyatt Mathisen came to the plate and delivered his first MLB hit, a single to right that moved Ahmed to third. Musgrove struck out Gallen and picked Mathisen off first for the final out.

Starling Marte made a diving catch to rob Adam Frazier of a hit. Josh Bell singled on a bloop down the right field line that got beyond the second baseman, who was playing the shift. Polanco draws a walk to move Bell to second. Reynolds strikes out for the second out. Newman grounds out to second.

Marte led off the third by grounding out to Bell again, who flipped to Musgrove for the out this time. Musgrove followed with a fly out and a pop out.

Ke’Bryan Hayes reached on an error by Nick Ahmed, who dropped a potential catch while ranging back for a loop hit to shallow left. Maile grounds into a 5-4-3 double play. Musgrove singles up the middle. Dyson flew out to center.

Frazier starts the inning looking at a third strike. Bell draws a one-out walk. Polanco strikes out on a check swing. Reynolds grounded to the shortstop, who stepped on the bag at second for the final out.

Mathisen comes to the plate and doubles off the wall in center field. Gallen sacrifices him over to third with a bunt. Musgrove got Marte to ground out again, this time going back to the mound and forcing Mathisen to hold at third base. Musgrove got Vargas to ground out to second to end the inning.

Newman started the inning with a single. Hayes strikes out swinging. Maile hits a double to left field, moving Newman to third. Musgrove strikes out for the second out. The Diamondbacks go to right-handed pitcher Hector Rondon in relief. Dyson singles to left field, bringing in Newman and moving Maile to third. Frazier grounds out to second to end the inning.

Musgrove had a quick inning with two fly outs and a ground out.

Rondon returns for the seventh inning and gets three quick outs, with two ground outs and a strikeout against Reynolds.

Calhoun starts the bottom of the seventh with a double. Musgrove strikes out Ahmed and Mathisen back-to-back. Jake Lamb comes on to pinch hit and grounds out to second.

Arizona brings in right-handed pitcher Kevin Ginkel. Newman flies out to center, Hayes strikes out, and Maile flew out to the wall in right field for a quick frame.

Keone Kela comes on in relief of Musgrove as the top of the order comes up. Kela got Marte to fly out to right, and followed with a fly out to left and a pop out to short.

Colin Moran comes in as a pinch hitter for Kela and singles past the second baseman. Dyson grounds into a fielder’s choice, with Moran out at second. Adam Frazier comes to the plate with his 12 game hitting streak on the line. He rips a triple to the right field corner, scoring Dyson and extending the streak. Bell is intentionally walked and Arizona goes to right-handed pitcher Josh Green to face Polanco.

Polanco flew out to center field, allowing Frazier to score and give the Pirates a four run lead. Reynolds grounded out to second to end the inning.

With a four run lead, Michael Feliz comes on to pitch the ninth for the Pirates. He strikes out Escobar for the first out, gets Kelly to ground out to first, and ends the game on a fly out to center field. 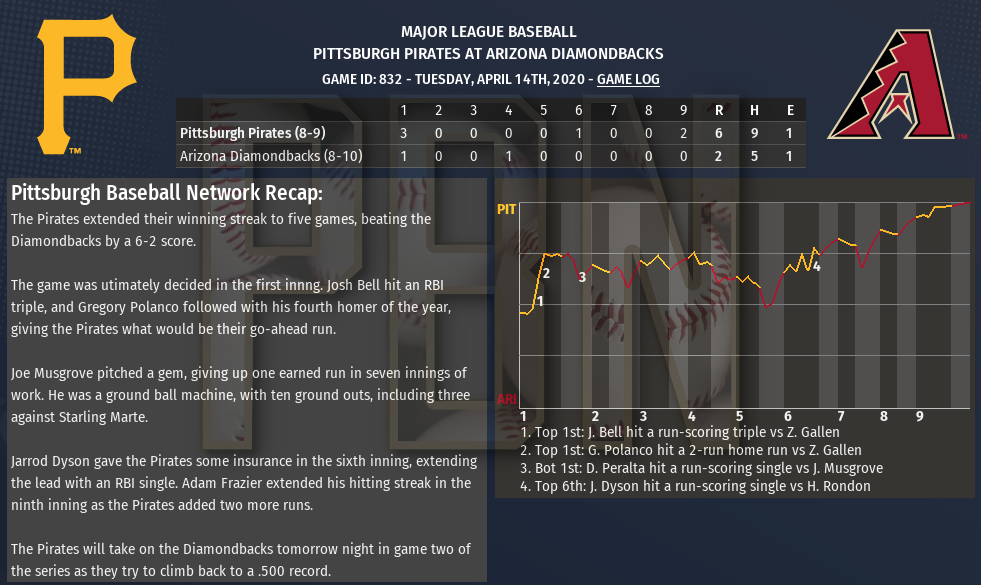 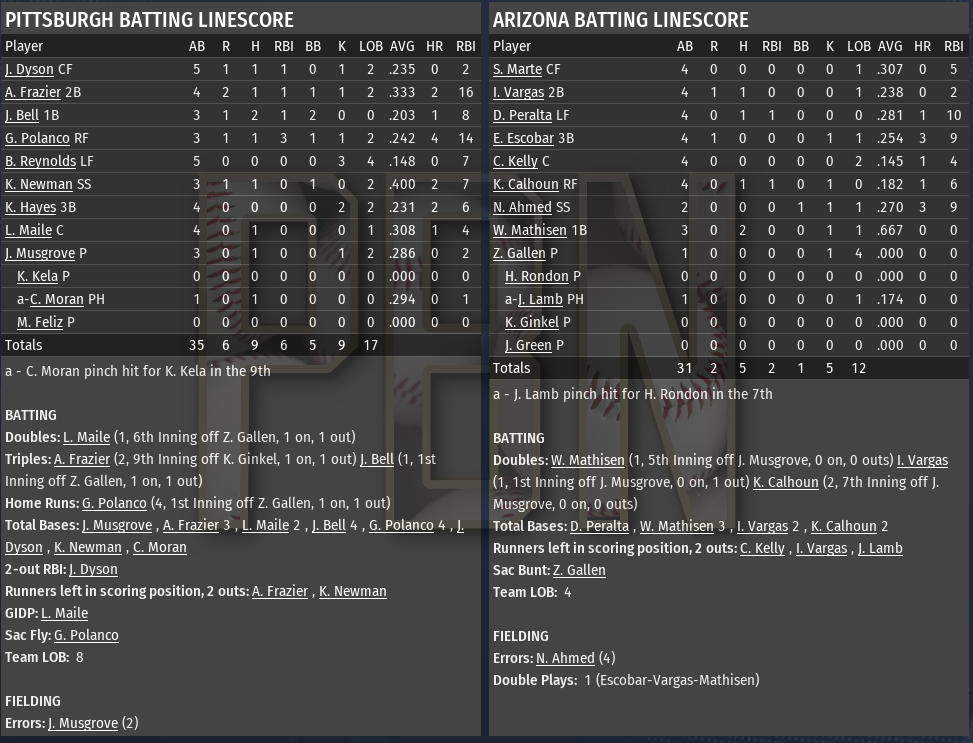 Hector Noesi cleared waivers and was assigned to Indianapolis. 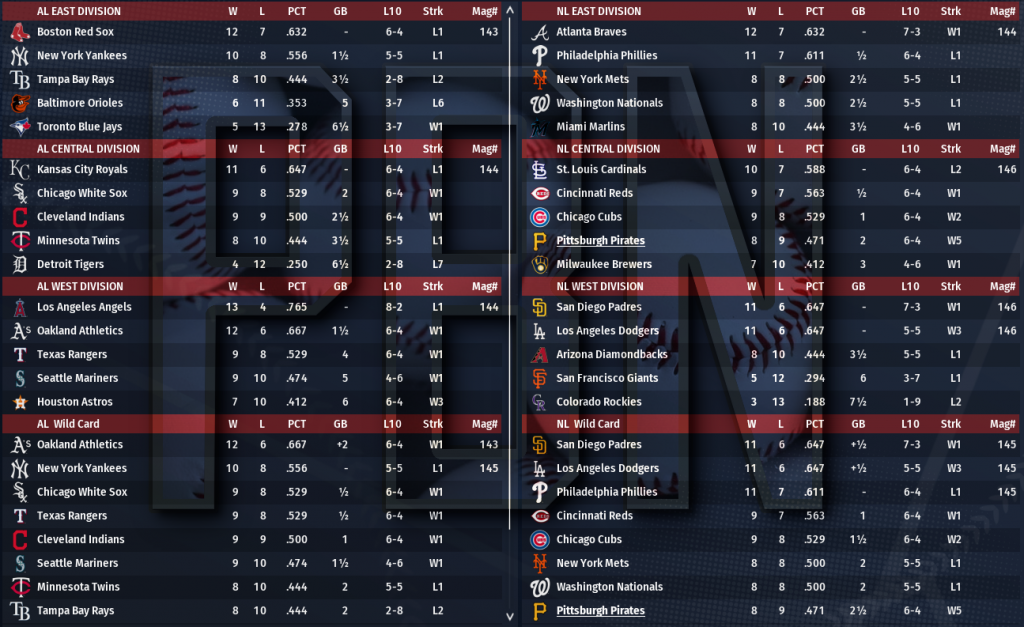 The Pirates take on the Diamondbacks tomorrow at 8:40 PM EST. A win will put them at .500. Here are the starters for the final games of the series: