OOTP: Pirates Go For the Sweep Today Against the Orioles

One downside to the OOTP simulation is that the software doesn’t fully incorporate complex option rules. As a result, the game can constantly rotate relievers in and out of Triple-A, with no waiting period before they can return.

There have been a lot of transactions the last few days along these lines. To break them down:

**On Thursday the Pirates called up Blake Weiman and James Marvel, sending Richard Rodriguez and Edgar Santana down.

**On Friday, Blake Weiman was optioned to Altoona and Richard Rodriguez was called up.

**On Saturday, Hector Noesi was designated for assignment and Richard Rodriguez was sent down. Weiman and Santana returned.

These moves obviously aren’t realistic. I’ve been trying to manually reverse some of them, but the game automatically makes them again. I’ll keep trying to get these sorted out. If any OOTP players have suggestions, feel free to share. 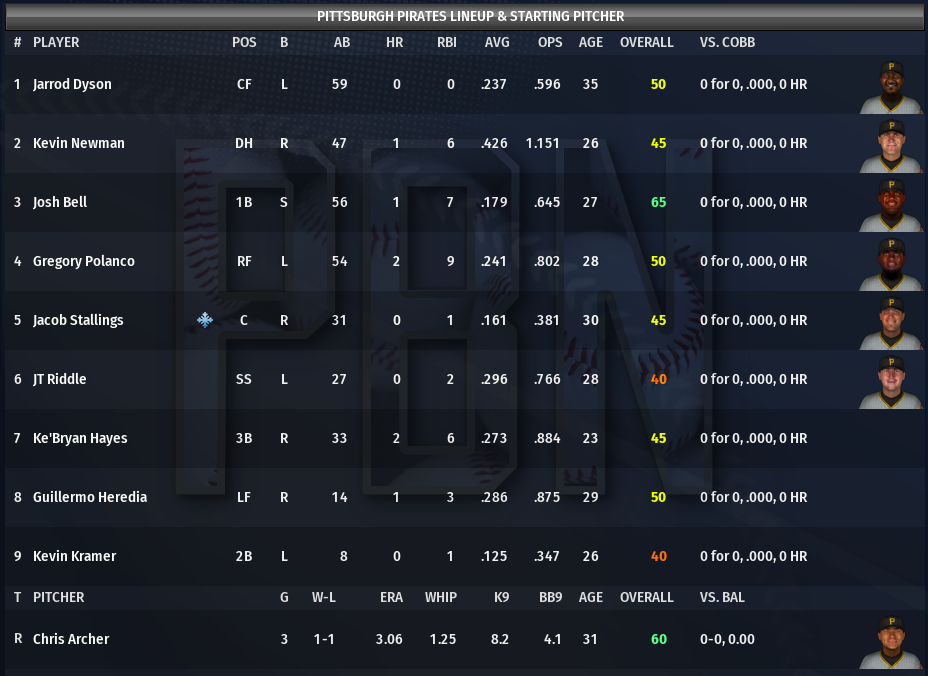 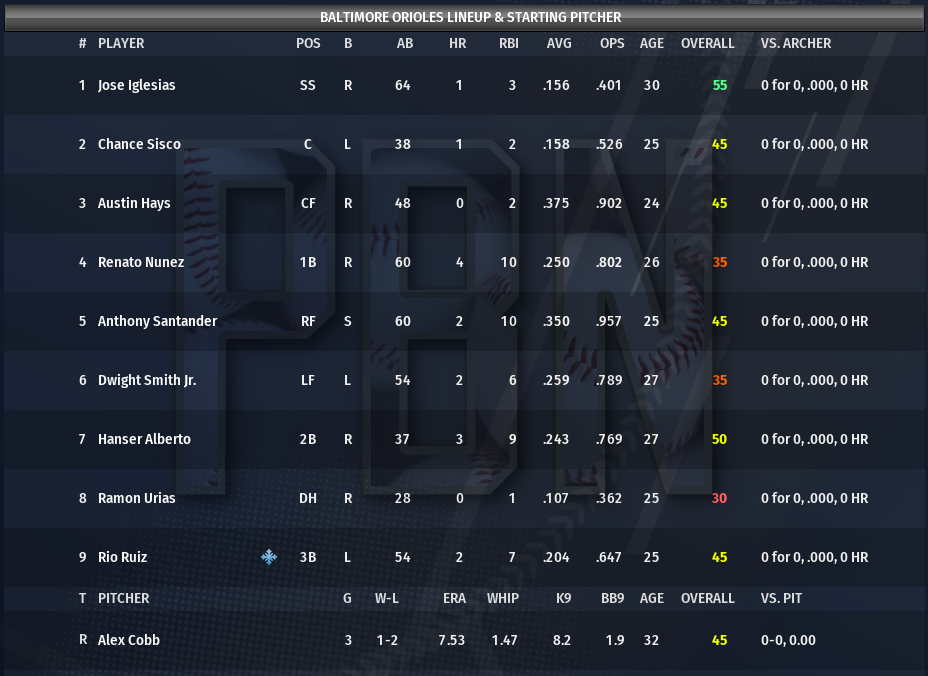 Cobb struck Dyson out to start the game. Newman flew out to left. Bell grounded out to third to end the quick inning.

Archer started the game with a ground out to second. Chance Sisco hit a single through the right side. Archer struck out Hays on a 3-2 fastball, and struck out Nunez on a slider.

Polanco grounded out to third to start the inning. Jacob Stallings gave the Pirates their first hit with a single to left. Riddle strikes out looking. Hayes takes a 3-2 pitch low for ball four. Heredia singled past the third baseman. Stallings rounded third and beat the throw for the first run of the game.

Kevin Kramer was hit in the right hand by a pitch to load the bases. The trainer checked on him, but he was able to stay in the game. Dyson popped out to short to end the inning.

Archer had a quick inning, getting two ground outs and striking Smith Jr. out on a 2-2 pitch.

Kevin Newman led off the third inning with a solo homer on an 0-2 pitch. The ball had a 107.5 MPH exit velocity. Josh Bell lined a single to left field. Gregory Polanco followed with a two run homer to right-center. Stallings flew out to left for the first out. Riddle grounded out to short and Hayes struck out looking at a fastball at the knees.

Archer got a strikeout and a ground out before giving up a single up the middle to Iglesias. Chance Sisco popped out to end the inning.

Heredia started the fourth inning with a single to left. Kramer drew a walk. Dyson flew out to left. Newman grounded into a 6-4-3 double play.

Archer struck out Hays looking at a 96 MPH fastball. He walked Nunez and gave up a single to Santander, putting runners at first and second. A passed ball by Stallings allows the runners to move up a base. Archer walks Smith Jr. to load the bases. Hanser Alberto hits an RBI single to right field. Urias flies out to right field. Santander scores, beating the throw from Polanco. Archer strikes out Ruiz to end the inning.

Cobb had a quick inning in the fifth, getting two ground outs and a fly out.

Iglesias leads off the fifth with a single up the middle. Sisco tries a bunt, but pops out to Archer. Hays flies out to center. Nunez grounds out to third, with Hayes fielding the hard grounder and going the short way to second for the final out.

JT Riddle starts the sixth inning with a single to center. Hayes walks on a 3-2 fastball. Heredia hits another grounder to third, but this is stopped on a dive by Ruiz. He throws to first for the out, with the runners moving into scoring position. The Orioles go to the bullpen, calling on right-handed pitcher Shawn Armstrong. Kevin Kramer lines out to center. Riddle tags and scores, and Hayes moves to third on the throw to the plate.

Dyson singles to left past a diving Ruiz to bring in another run. Newman hit a bloop over Iglesias’ head, and reaches on an error when Iglesias bobbles the ball. Josh Bell grounds out to third.

Santander singles to center field to start the bottom of the sixth. Archer immediately picks him off first base. JT Riddle caught a line drive for the second out, and Archer got a fly out to center to end the inning.

Polanco starts off the inning with a strikeout. Left-handed pitcher Richard Bleier comes on for the Orioles. Stallings flies out to left field. Riddle grounds out back to the mound.

Richard Rodriguez comes on in relief of Archer and gets a ground out to third for the first out. Ruiz singles to left field. Iglesias singles to center. Rodriguez gets a grounder to third, but Hayes can only get the runner at second. Hays grounds out to first to end the inning.

Bleier returned for the eighth inning and had a quick frame, getting two fly outs and a ground out.

Rodriguez returns to the mound for the Pirates. He walks Nunez and the Pirates turn to Michael Feliz. Feliz gets a 5-4-3 double play against Santander. Smith Jr. walks and Alberto reaches on an infield single to put runners at first and second. Urias rips a line drive down the right field line, bringing in a run and putting runners at second and third. Feliz strikes out Ruiz to end the inning.

The Orioles go to left-handed pitcher Tanner Scott in the ninth. He walks Dyson to start the inning. Newman strikes out swinging on a 99 MPH fastball. Bell struck out and Polanco popped out. 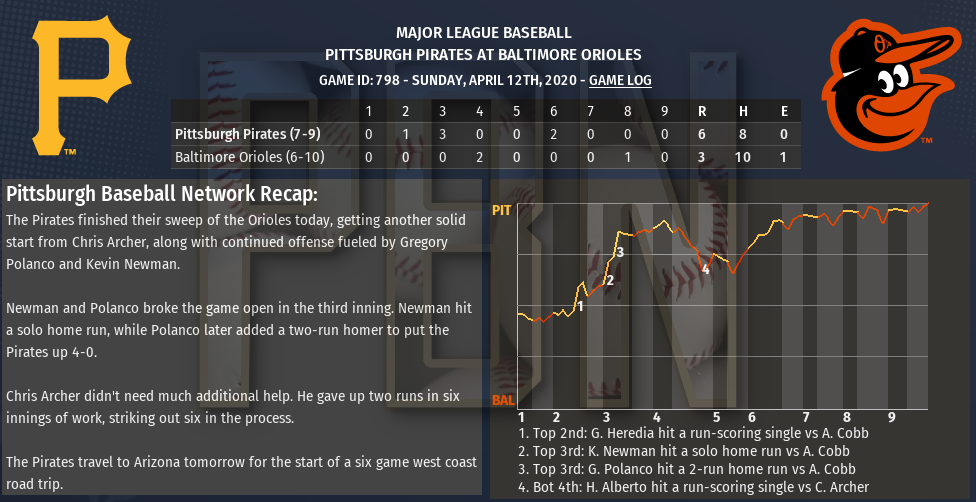 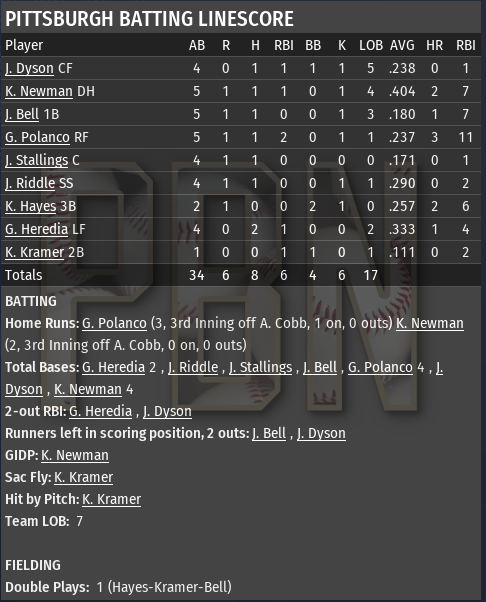 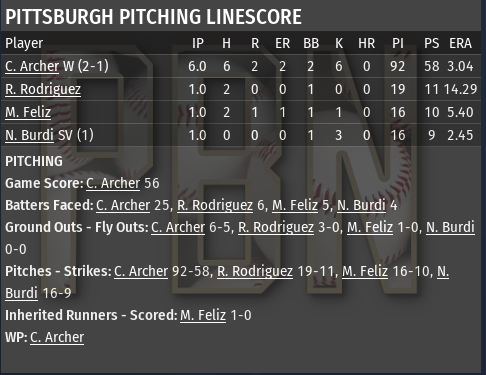 The Pirates moved from 27th to 19th in the weekly MLB Power Rankings. 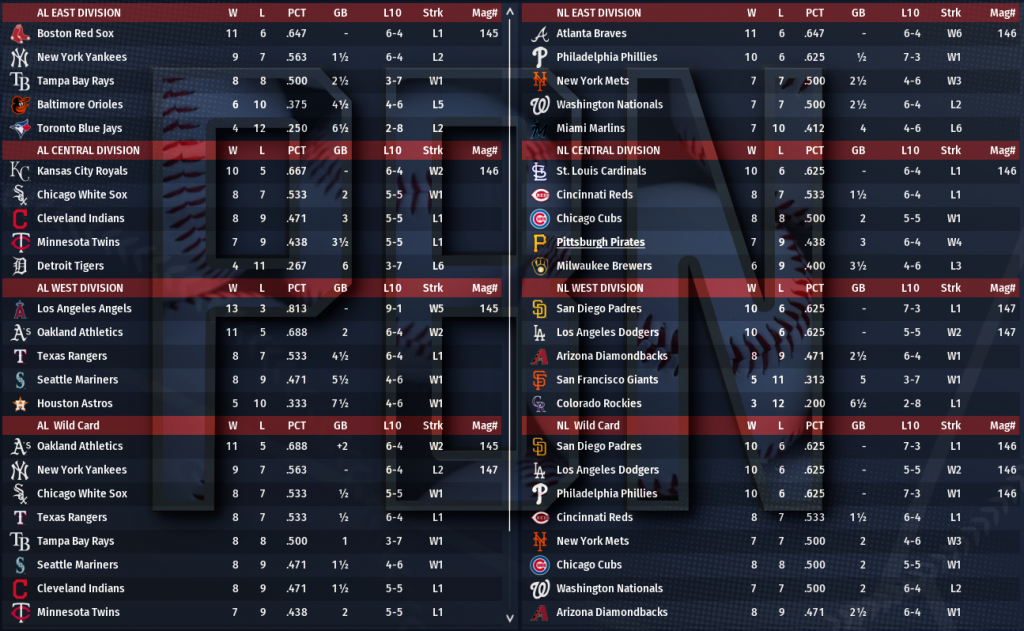 The Pirates are off tomorrow as they travel to Arizona. They start a three game series with the Diamondbacks on Tuesday. Here are the games and probable starters: