The Pirates played a doubleheader earlier this week, which means that Chris Stratton (1-0, 2.31) is going on short rest. He’ll need to be efficient today to save the bullpen.

The Pirates’ offense will hope to continue yesterday’s outburst. Today they go up against Kyle Lloyd (2-0, 1.80). 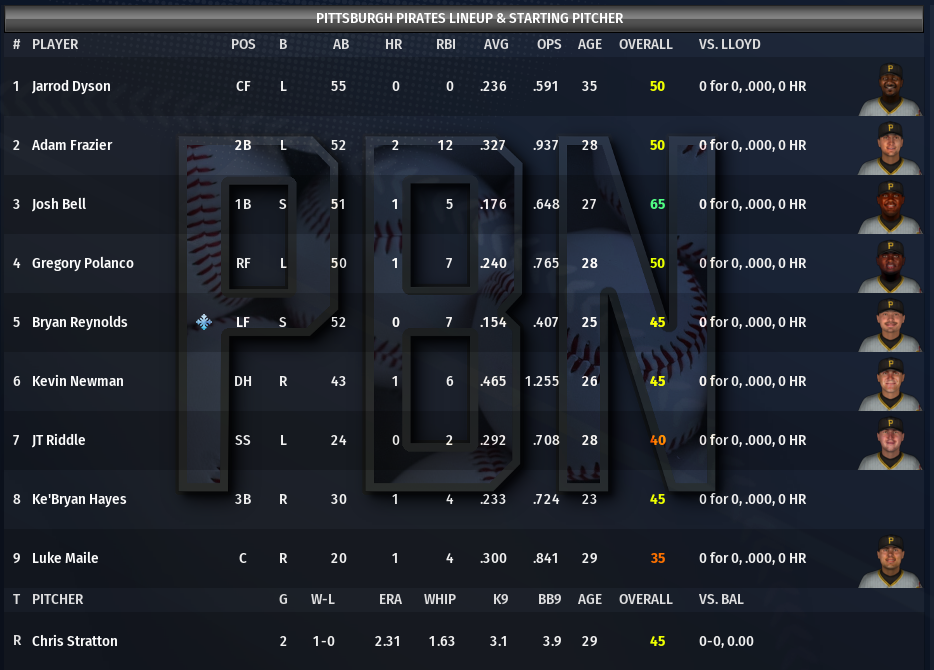 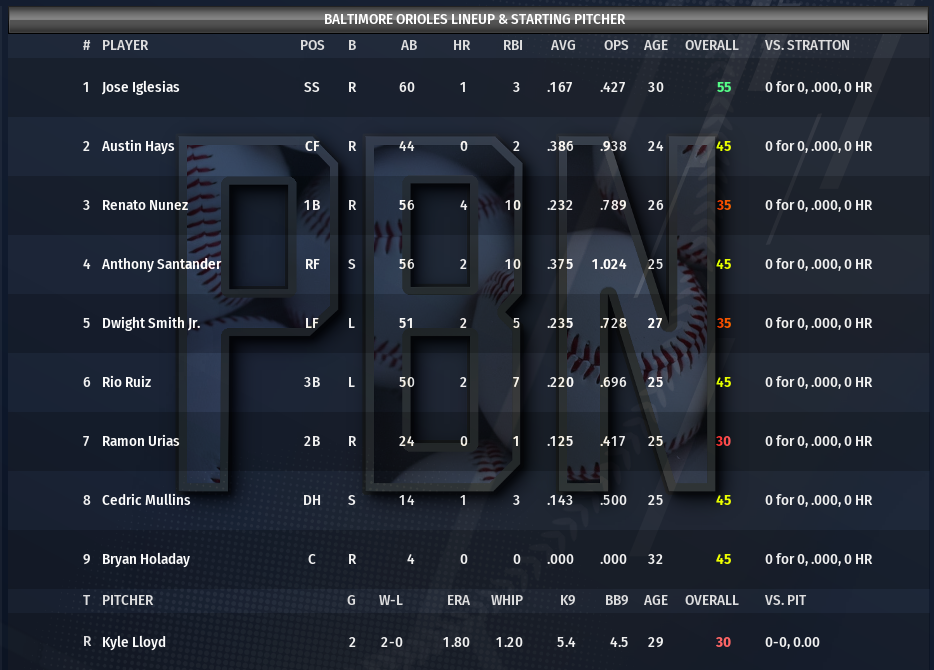 Jarrod Dyson tries to reach on a bunt single, and beats the throw by a step. Adam Frazier is hit with a 2-2 pitch. Josh Bell hit a line drive to the left-center gap, which was caught by Dwight Smith Jr. on a nice diving catch. Dyson and Frazier were both running. Smith threw to second to get Dyson, and the throw to first got Frazier for the triple play.

Chris Stratton got two fly ball outs before giving up a single to Renato Nunez. Stratton got Santander to fly out to center field.

Polanco starts the inning with a strikeout. Reynolds singles up the middle. Newman grounds into a 5-4-3 double play.

Stratton walks Smith Jr. Ruiz flies out to Dyson in center. Stratton strikes out Ruiz looking at a slider. After issuing a walk, Stratton got a fly out to center to end the inning.

Riddle flew out for the first out of the inning. Hayes singled to right field on a line drive. Maile walks, turning the lineup over. Dyson gets hit with a 1-1 pitch, loading the bases for Adam Frazier with one out. Frazier grounds to the first baseman, who goes to second for the second out. Frazier was safe at first, allowing a run to score. Josh Bell ripped a line drive double down the left field line, bringing in two more runs. Gregory Polanco followed with a two run homer to center field. The ball went 406 feet ad had a 103.1 MPH exit velocity.

The Orioles went to their bullpen early, calling on right-handed pitcher Isaac Mattson. Reynolds grounded out to second to end the inning.

Working with a five run lead, Stratton makes quick work of the Orioles, getting a ground out, pop out, and fly out.

Newman and Riddle both flew out to center field, with Riddle’s shot going to the deepest part of the park. Hayes struck out for the third out.

Santander leads off with a line drive that was caught by Bell at first. Smith Jr. singles to left field. Ruiz grounds into a 4-6-3 double play.

Maile grounds out to third. Dyson flies out to left field. Adam Frazier extended his hitting streak to 12 games with a single to left. Hunter Harvey comes on to pitch for the Orioles and strikes out Josh Bell.

Stratton retired the first two batters on one pitch each, with a ground out and fly out. Holaday singled to right, but Iglesias grounded out to second to end the inning. Stratton needed just six pitches.

Stratton gets a fly out to right to start the inning. Nunez hit a line drive to right field for a single. Dovydas Neverauskas comes on in relief. Stratton is pitching on short rest today, due to the doubleheader earlier in the week. Neverauskas gets a fly out for the second out. Smith Jr. hit a run scoring double to put the Orioles on the board. Ruiz grounded out to first.

The Orioles go to left-handed pitcher Tony Cingrani in the seventh inning. JT Riddle leads off with a double to left-center. He’s thrown out trying to stretch it to a triple. Ke’Bryan Hayes and Luke Maile draw back-to-back walks. The Orioles bring in right-handed pitcher Miguel Castro.

Dyson pops out to the third baseman in foul territory. Frazier follows with a double to the left-center gap, bringing in two more runs. Bell grounds out to second to end the inning.

Neverauskas returns for the seventh inning and gets a fly out to right for the first out. He walked Cedric Mullins, then got Bryan Holaday to pop out to short. Iglesias flew out to center to end the inning.

Castro returned for the eighth inning and struck out Polanco and Reynolds. He got Newman to pop out to short for the quick inning.

Neverauskas comes back out, but gives up a leadoff single to Austin Hays. Blake Weiman comes on in relief and gets a fly out to center field for the first out. Santander hits a liner to left field, but Reynolds made a leaping catch to rob him of a hit. Santander currently has a 13 game hitting streak, which leads the majors, and is currently at risk of ending. Weiman got a strikeout to end the inning.

Right-handed pitcher Mychal Givens comes in for the Orioles. Riddle led off with a walk. Ke’Bryan Hayes hit a home run to left field, his second homer of the season. Maile singles to right. Dyson struck out swinging at a low pitch. Frazier grounded into a 6-4 fielder’s choice. Bell struck out looking.

Weiman returns for the ninth, up by eight runs with the bottom of the order due up. Ruiz strikes out on a 94 MPH fastball. Urias grounds out to short. Mullins flies out to right to end the game. 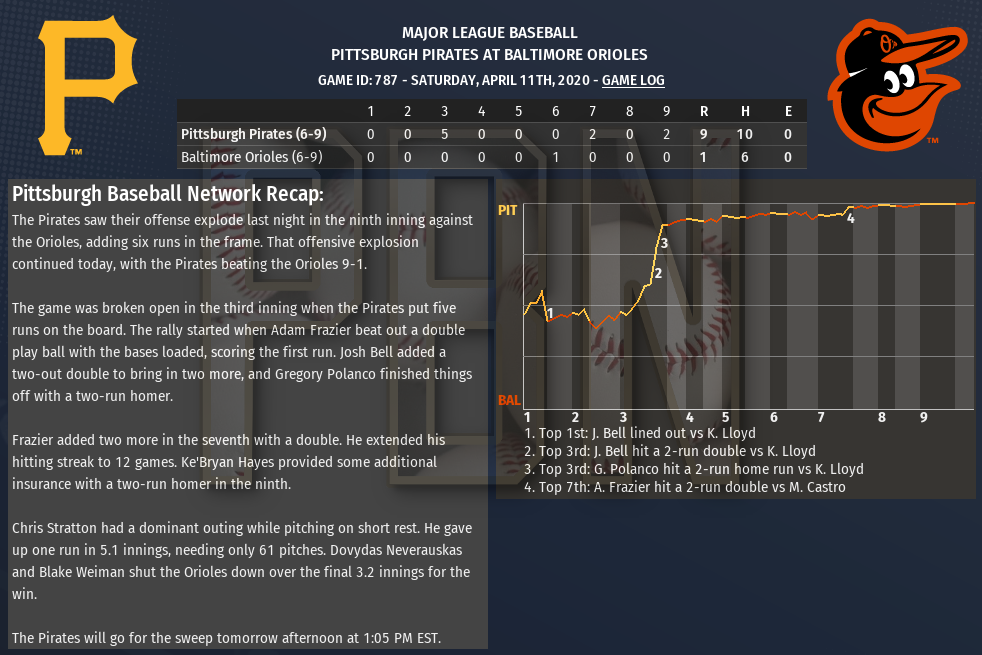 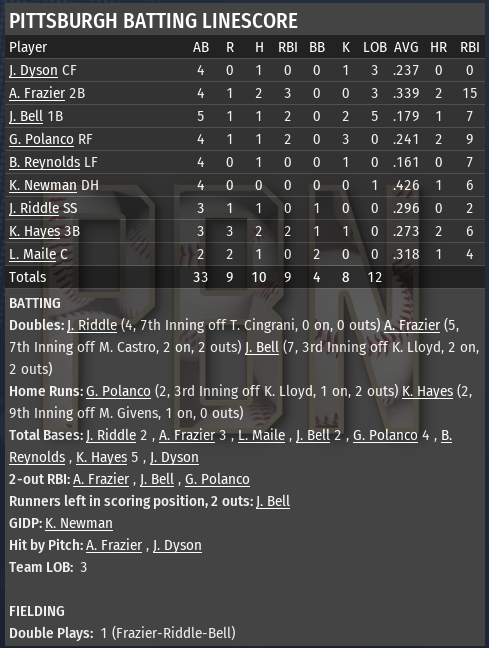 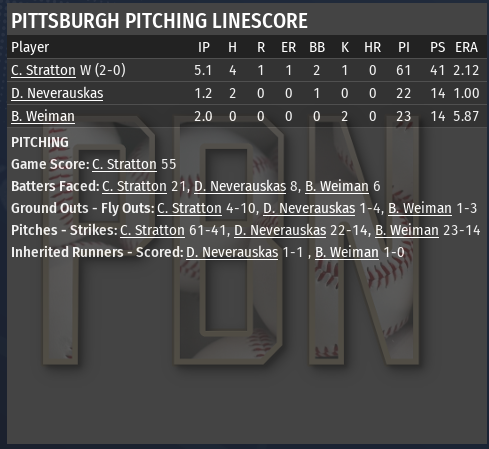 Adam Frazier’s 12 game hitting streak is now the longest active in the majors. It’s the second longest of the season, right behind Santander, whose streak ended today at 13 games. 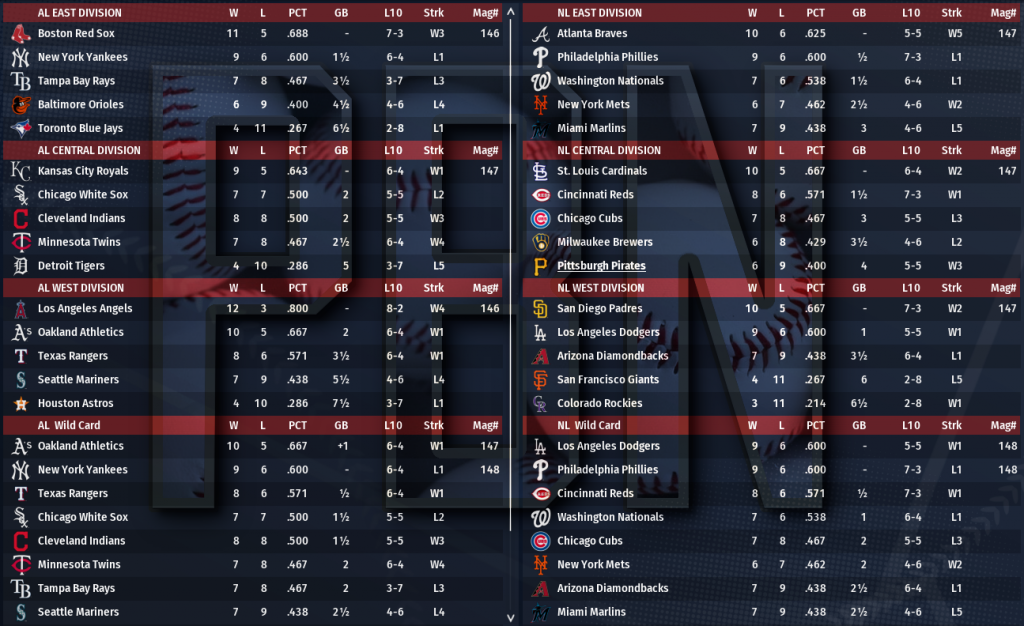