The Pittsburgh Pirates (4-9) take on the Baltimore Orioles (6-7) tonight in the start of a three game interleague series at Oriole Park at Camden Yards. 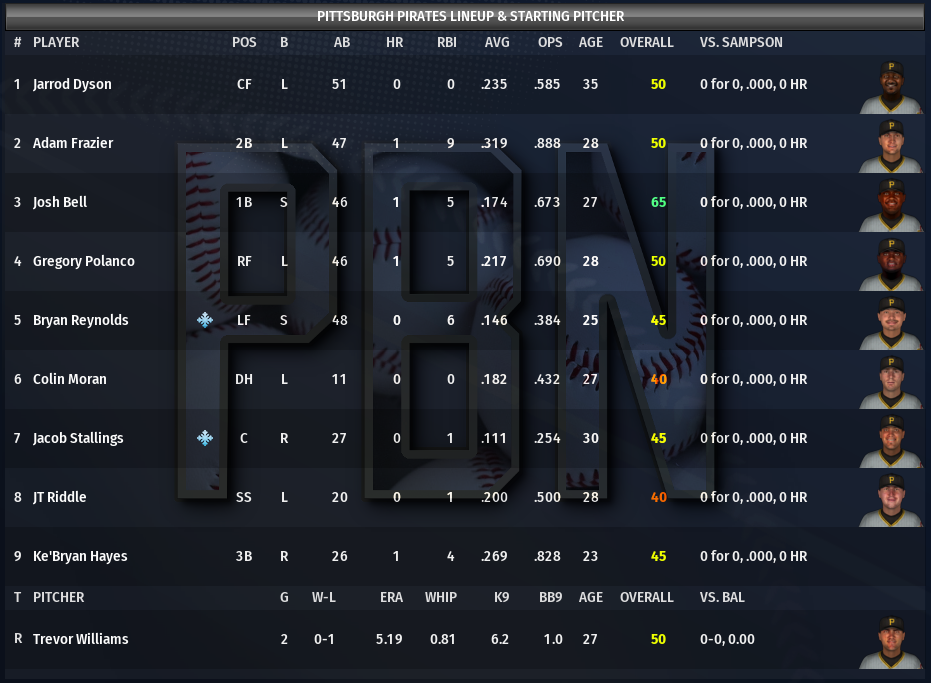 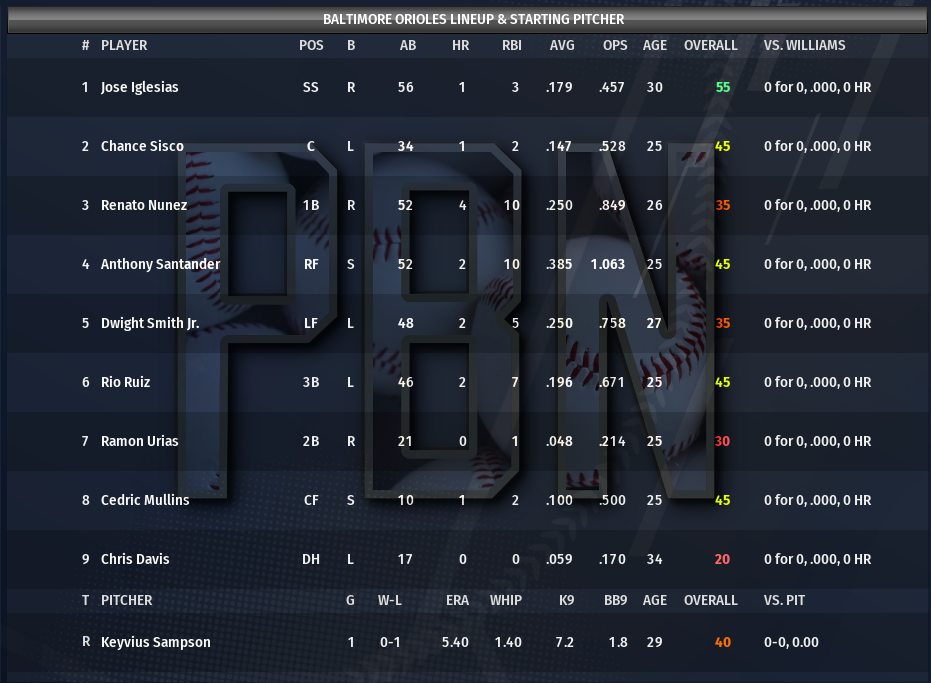 Jarrod Dyson grounded out to third to start the game. Adam Frazier hit a solo homer to right field, giving the Pirates the lead. The home run also extended Frazier’s hitting streak to 11 games. Josh Bell and Gregory Polanco both struck out.

Williams set the Orioles down in order, with a fly out, a ground out, and a pop out.

Sampson struck out Reynolds for his third strikeout in a row. He followed by striking out Moran. Jacob Stallings hit a double on a line drive to the left-center field gap. JT Riddle singled to left, with Stallings holding up at third. Hayes flew out to left.

Williams gave up a single to Anthony Santander to start the inning. Rio Ruiz singled with one out, putting runners at first and second. Williams hit Urias in the back with a pitch to load the bases. Cedric Mullins grounded out to third, bringing in a run to tie the score. Chris Davis walked on a 3-2 pitch that was low. Iglesias struck out to end the inning.

Dyson led off the inning with a single. Frazier grounded into a 4-6-3 double play. Josh Bell flew out to right.

Chance Sisco led off the bottom half of the inning with a single to left. He tried to steal second, but Jacob Stallings threw him out. Stallings is 1-for-3 on stolen bases attempts this year. Nunez grounded out to short, and Santander popped out.

Gregory Polanco led off with a single to right. Reynolds walks to put a second runner on base. Colin Moran popped out and Jacob Stallings grounded into a double play.

Williams started the inning with a walk. A grounder to second got the lead runner in the next at-bat. Urias flew out to right field, and Mullins grounded out to short, with Riddle going to second base for the out.

Riddle singled to left to start the inning. Hayes grounded into a double play. Dyson walked on four pitches. Adam Frazier lined out to right.

Trevor Williams had a quick inning in the fifth, with three straight ground ball outs to the right side of the infield.

Josh Bell reached first on an error by shortstop Jose Iglesias. Polanco walked on four pitches. Reynolds flew out to center field. Right-handed pitcher Hunter Harvey comes on to face Colin Moran, who singles to center, bringing in Bell for the go-ahead run. Harvey struck out Stallings and Riddle to end the inning.

Williams struck out Nunez for the first out of the inning, and got two more ground ball outs to retire the side in order.

Harvey returned to the mound for the Orioles and got three quick ground ball outs.

Williams gave up a single to Ruiz to start the seventh. Urias hit a double off the left field wall, with Ruiz holding up at third. Williams bounced back with a much needed strikeout against Mullins. Kyle Crick comes on to face Chris Davis, who grounds into the shift on the right side of the infield for the second out. Iglesias grounds out to third, getting the Pirates out of the inning with the lead.

Left-handed pitcher Richard Bleier comes on to pitch for the Orioles. Josh Bell grounded out. Gregory Polanco hit a deep fly out to the wall in right field. Reynolds grounded out to second.

Crick returned for the Pirates in the eighth inning. He struck out Cisco, got Nunez to fly out to center, and struck out Santander for a quick inning.

Colin Moran led off the ninth inning with a single to right field. Stallings singles to center, with Moran moving up a base. JT Riddle hit a double to the left field wall, scoring Moran and moving Stallings to third. The Orioles go to right-handed pitcher Dillon Tate. He gets Hayes to fly out to shallow left field, and Dyson to pop out to short. Adam Frazier singles up the middle, bringing in two more runs.

Josh Bell hit a hard single up the middle, past the shift, putting runners on first and second. Gregory Polanco hit a shot off the left-center field wall for a triple, bringing in two more runs. Reynolds singled to bring in Polanco. Moran flew out to center field.

James Marvel comes in to pitch for the Pirates in the bottom of the ninth, now up 8-1. Smith Jr. flies out to left. Rio Ruiz grounds out back to Marvel. Urias hits a two out single. Mullins hits another single, putting runners at first and second. Marvel strikes out Chris Davis to end the game. 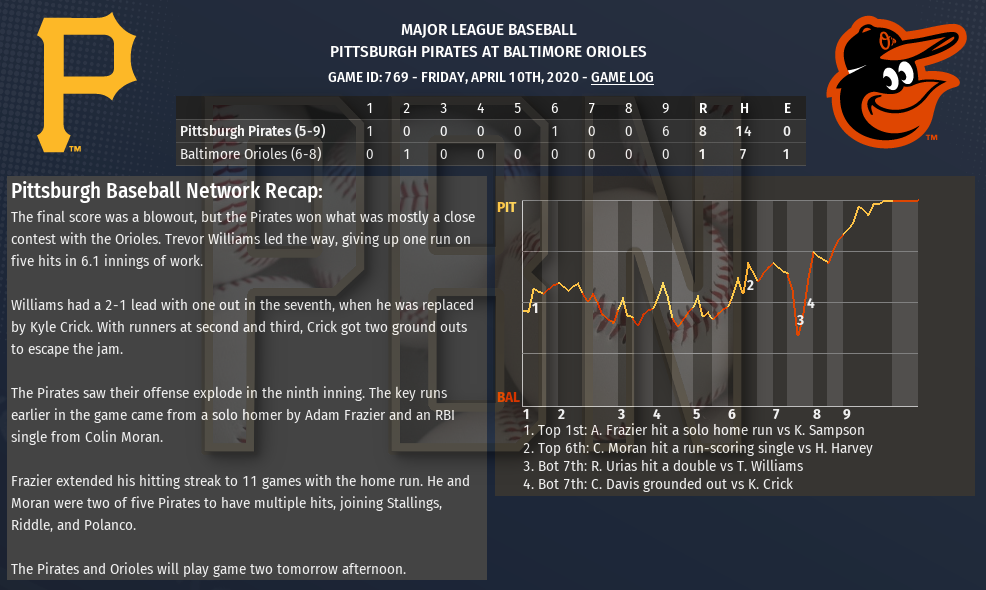 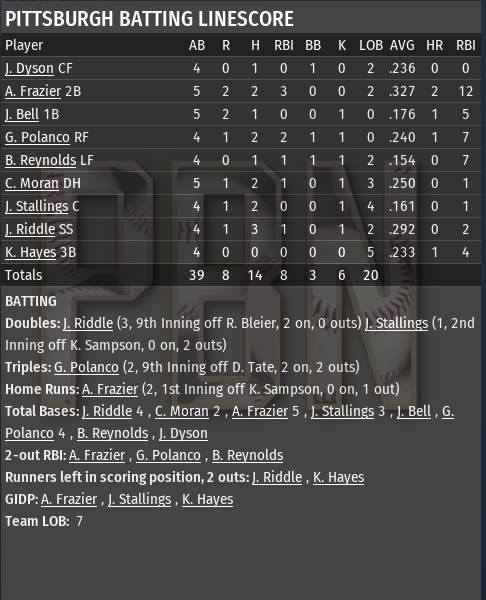 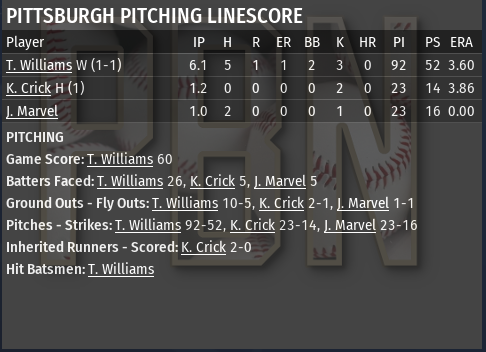 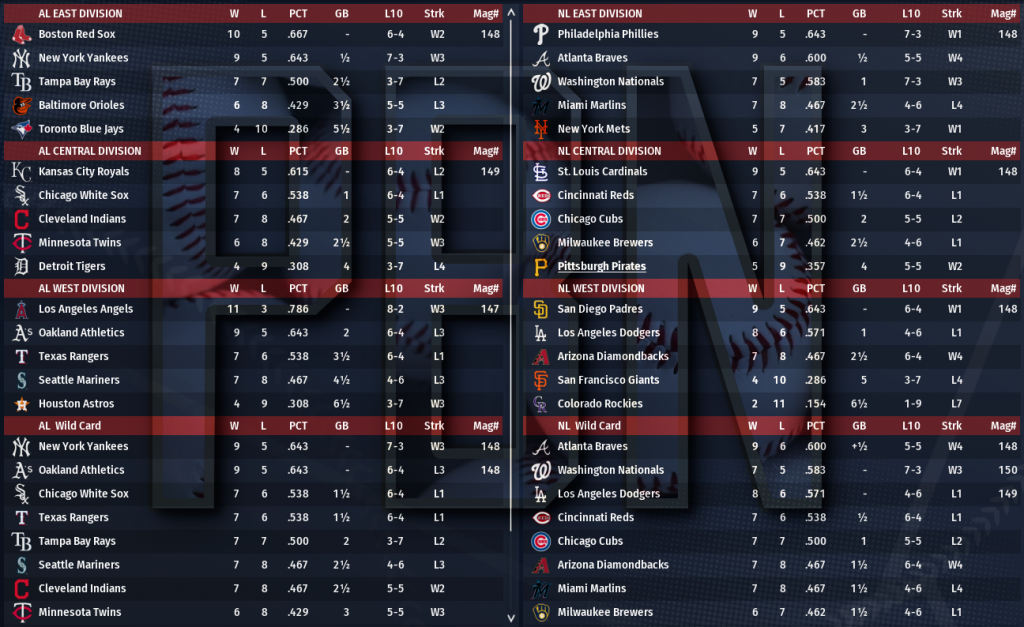