The Pirates made a few roster moves prior to today’s game, shoring up their bullpen after three games in the last two days. Richard Rodriguez and Edgar Santana were both sent down to Indianapolis. The Pirates recalled Blake Weiman and purchased the contract of James Marvel.

The Pirates and Cubs conclude their four game series today at PNC Park. Here is the lineup for the Cubs: 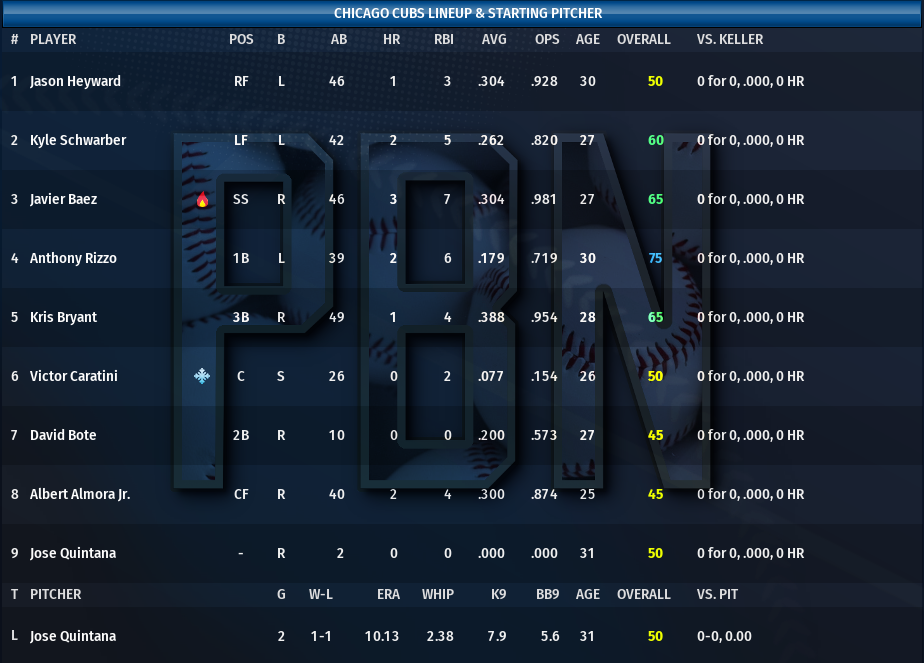 Here’s the lineup for the Pirates. There are a few substitutions today, with Gregory Polanco and Kevin Newman both getting a day off. 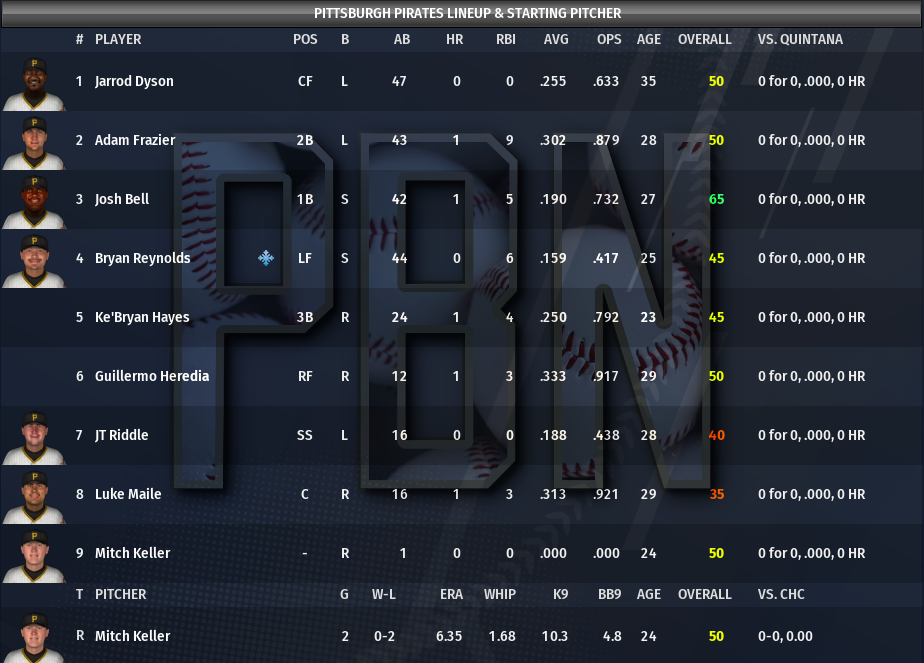 Jarrod Dyson flew out to center. Adam Frazier popped out to third base. Josh Bell flew out to left field to end the quick inning.

David Bote started the inning by reaching on a bunt single. Almora flew out for the first out of the inning. Quintana laid a bunt down, but Hayes charged in on it and made a throw to second for the lead runner. Heyward hit a soft liner to second to end the inning.

Quintana struck out Reynolds, Hayes, and Heredia for another quick inning.

Keller walked Schwarber on a 3-2 fastball that was inside. Baez followed with another walk. Keller struck out Rizzo for the first out. Rain begins to fall as Kris Bryant takes a first pitch strike from Keller. Bryant struck out, and Caratini lined out to first.

The rain picked up at the start of the fourth inning and led to a 31 minute delay. Keller returned from the delay and got three straight groundouts to shortstop.

Keller struck out Heyward to lead off the inning. Schwarber followed with a solo homer to left field. Baez singled up the middle. Keller struck out Rizzo on a high fastball. Bryant singled to center, with Baez moving to third. James Marvel entered the game in relief and got Caratini to fly out to right to end the inning.

Ke’Bryan Hayes led off the inning with a single. Heredia was hit with a 3-1 fastball, giving him first base. Riddle flew out to left. Maile struck out swinging. Kevin Newman entered the game with two outs and runners on first and second, replacing Marvel as a pinch hitter. Newman hit a triple to the gap in right-center, bringing the Pirates to within one run. Dyson grounds out to end the inning.

Blake Weiman comes on in relief of Marvel to face the bottom of the Cubs’ order. He struck out Bote, got Almora to line out to right, and struck out Quintana.

Frazier grounded out to second. Bell flew out to left-center. Reynolds struck out to end the inning.

Weiman returns to the mound in the seventh. Heyward lined out to Adam Frazier on a lunging stop. Weiman strikes out Schwarber looking and gets Baez to pop out to shallow right field.

Hayes draws a leadoff walk to start the bottom of the seventh. He moves to second base on a groundout by Heredia. Riddle popped out to shallow right field. Jeremy Jeffress comes on in relief of Quintana, and got Luke Maile to ground out to second.

The Pirates stick with Weiman, who gets Rizzo to ground into the shift for a 4-3 putout. Kyle Crick comes on to face Kris Bryant, and strikes him out on a high fastball. Caratini flew out to right for the final out.

Colin Moran entered as a pinch hitter for Crick and drew a walk on a 3-2 sinker that went low. Dyson strikes out looking. Frazier singles on a liner to center, with Moran moving to second. Brandon Morrow comes in to face Josh Bell and strikes him out with a cutter. Reynolds strikes out on a 3-2 fastball for the third out.

Dovydas Neverauskas enters in the ninth for the Pirates. Bote flies out to right, Almora strikes out on a fastball, and Jason Kipnis struck out while pinch hitting for Jeffress.

Right-handed pitcher Trevor Megill comes in for the Cubs in the ninth inning, with Craig Kimbrel needing the day off. Gregory Polanco enters as a pinch hitter for Ke’Bryan Hayes. Polanco struck out. Guillermo Heredia is hit with a pitch, taking first base. JT Riddle hits a line drive over the second baseman and it reaches the right-center field wall. Heredia tries to score from first and makes it with no throw. Riddle got a double on the hit, but moved to third on the throw to the plate. Luke Maile hits a walkoff single between short and third base for the win. 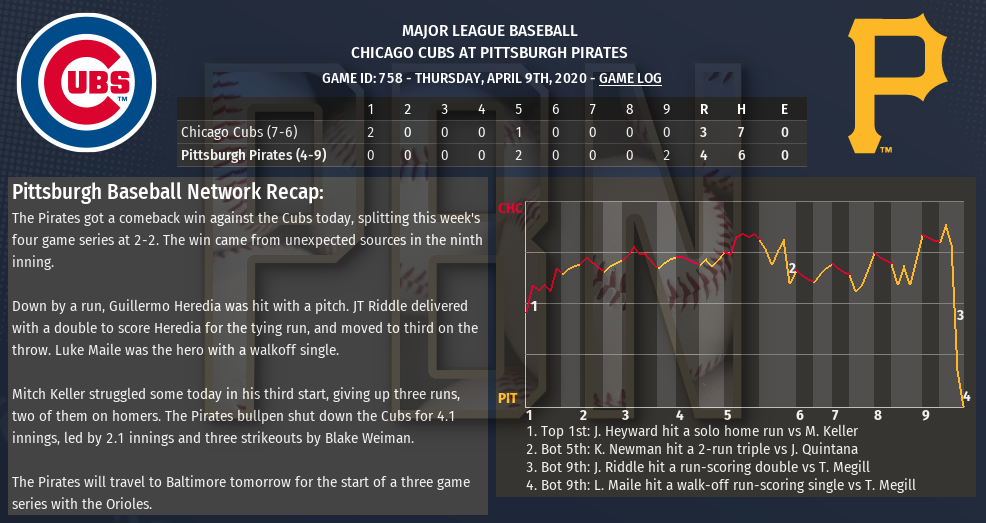 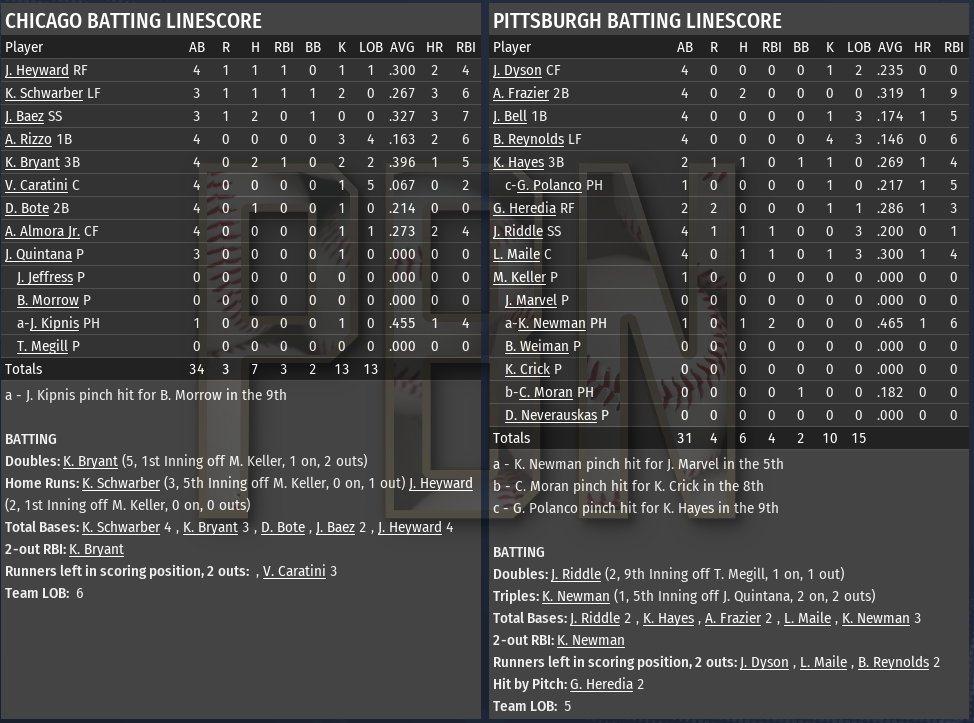 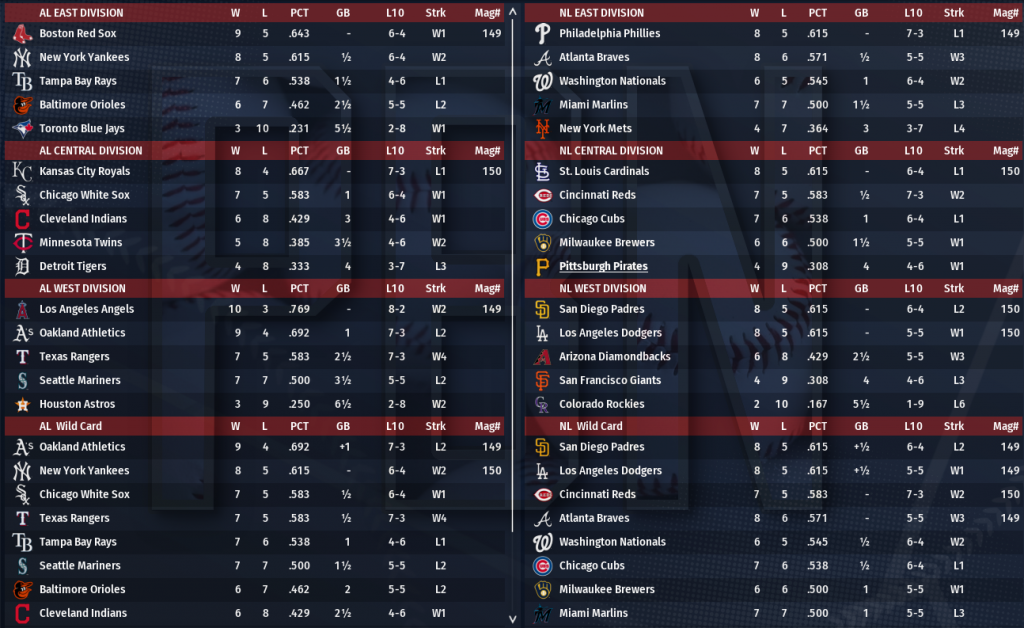 The Pirates take on the Orioles this weekend in Baltimore. Here are the probable starters and game times:

We’ll have our first OOTP Prospect Watch tonight, covering the 2020 Prospects and the 2025 results each night.