OOTP: Pirates Shake Up Lineup After 2-7 Start, With Newman and Frazier Leading the Way

The following is part of our simulation of the 2020 Pittsburgh Pirates season, using Out of the Park Baseball (OOTP). We simulate the season each day, as it was originally scheduled, and with no input from any of us, all to give you a Pirates team to follow this year. Also, we’re bored. I haven’t left the house in almost a month, and all of the Oreos were gone by day three. I guess what I’m trying to say is that you have a choice: You can follow the simulation by inning and make it seem like a game, or you can skip to the end and find out what happens.

The Pittsburgh Pirates will feature a new lineup in the opening game of today’s doubleheader against the Cubs. 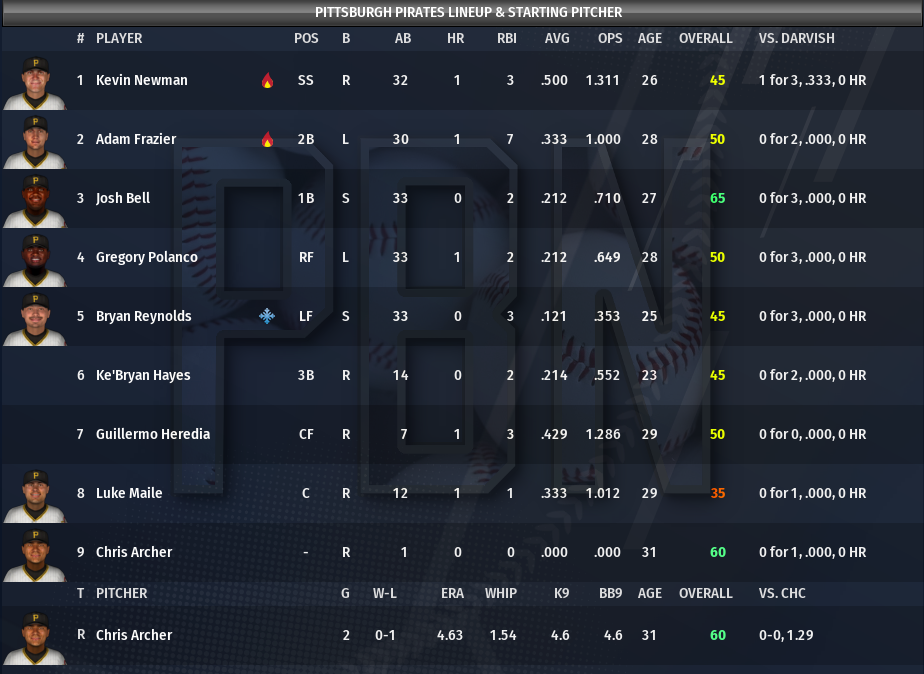 Kevin Newman and Adam Frazier have been the hottest hitters on the team. Frazier remains in the number two spot, but Newman moves up to the top of the order today, with Jarrod Dyson getting a rest.

The middle of the Pirates’ order has struggled, with Josh Bell, Gregory Polanco, and especially Bryan Reynolds playing below expectations. We’ll see if the new lineup can change things.

Chris Archer takes the mound for the second time this season, going up against Yu Darvish.

Archer got Jason Heyward to fly out to center. He struck out Kris Bryant, then walked Anthony Rizzo on four pitches. Javier Baez grounded out to third to end the inning.

Newman grounded out to short. Frazier drew a walk on a 3-2 pitch from Darvish. After Josh Bell flew out to center, Frazier moved to second on a two-out balk. Darvis got Polanco swinging on a 2-2 changeup for the third out.

Archer put the Cubs down in order in the second, with a flyout to right, a groundout to second, and a strikeout.

Bryan Reynolds led off the bottom of the inning with a single to left field. Ke’Bryan Hayes drew a walk and Guillermo Heredia hit an infield single to load the bases. Luke Maile took a 3-2 pitch low for a walk, giving the Pirates the first run of the game. Chris Archer struck out for the first out, bringing up the top of the order.

Newman drew a walk, giving the Pirates another run. Adam Frazier singled through the right side of the infield, bringing in a run. Maile was thrown out at home trying to score. Josh Bell walked to load the bases again, as Darvish issued his fourth walk of the inning. Gregory Polanco hit a bases-clearing double to give the Pirates a 6-0 lead. Reynolds grounded out to end the inning.

Archer started the inning with two fly outs. He struck out Heyward on a 2-2 pitch, but the ball got past Maile and Heyward took first. Kris Bryant reached on an infield single, and Rizzo walked to load the bases. Archer struck out Javier Baez to escape the jam.

Alec Mills came on to pitch for the Cubs in the third inning, ending the day early for Darvish, and giving the Cubs bullpen seven innings of work today before the second game of the double-header. Mills retired the Pirates in order.

Archer got Schwarber to ground out to second, and struck out Caratini for his fifth of the day. Jason Kipnis hit a two out double to the notch. Archer got his sixth strikeout to end the inning.

Archer led off the bottom of the fourth with a single to left field off of Mills. Newman doubled to center field, moving Archer to third with no outs. Adam Frazier grounded out back to the mound, and the runners stayed. A passed ball allowed Archer to score and moved Newman to third with Josh Bell up. Bell followed with a two run homer to right, extending the lead to 9-0. Polanco grounded out and Reynolds struck out.

Ian Happ came on to pinch hit for Mills and struck out swinging on a 97 MPH fastball. Heyward flew out to Frazier in shallow right field. Archer got his eighth strikeout of the game against Bryant.

Casey Sadler comes on to pitch in the fifth. Ke’Bryan Hayes leads it off with a single to left. Heredia hit a roller back to the mound, and Sadler went to second with the throw. The throw was hard and went into shallow center field, leaving runners safe at first and second. Maile took a 3-2 pitch down the right field line, bringing in Hayes and putting runners at the corners. Archer bunted Maile over to second for the first out. Sadler struck out Newman and got Frazier to ground out.

Archer struck Bryant out looking, struck Baez out swinging for his tenth strikeout of the day, and got Schwarber to fly out to center. He ends the inning at 107 pitches, 62 strikes.

Bell grounded out to first. Polanco walked. He moved to second on another passed ball that got by Caratini. Sadler walked Reynolds, and right-handed pitcher Jharel Cotton comes on in relief. Hayes flew out to center and Heredia grounded out.

Hector Noesi comes on in relief of Archer. He started with a ground out to second. Daniel Descalso pinch hit for Kipnis and hit a single to left. Almora reached on an infield single to third. Cotton tried to bunt the runners over, but Hayes made a good play on the bunt and got the lead runner at third. Noesi walked Heyward to load the bases. Bryant flew out to left for the third out.

Cotton got Maile and Noesi to ground out. Newman hit a two out single to center. Frazier followed by flying out to left.

Rizzo led off the inning with a single to right. Baez walked, and Richard Rodriguez came on in relief of Noesi. Rodriguez struck Schwarber out in three pitches, and got a 4-6 putout against Caratini. The double play was broken up by a slide, leaving runners at the corners. Descalso struck out on a low fastball for the third out.

After striking out Bell, Cotton gave up a triple to Polanco down the first base line. Polanco scored on a single to center from Reynolds. Ke’Bryan Hayes followed with his first MLB home run, going 405 feet to center field. Heredia flew out and Maile grounded out.

Rodriguez returned and struck out Almora for the first out. Pinch hitter David Bote grounded out to third for the second out. Heyward hit a triple to the corner in right field. Bryant barely reached on an infield single to short, giving the Cubs their first run. Rizzo hit a two-run homer to right, fulfilling the inevitable home run from every Pirates game. Nick Burdi came on and got Almore to fly out to center to end the game. 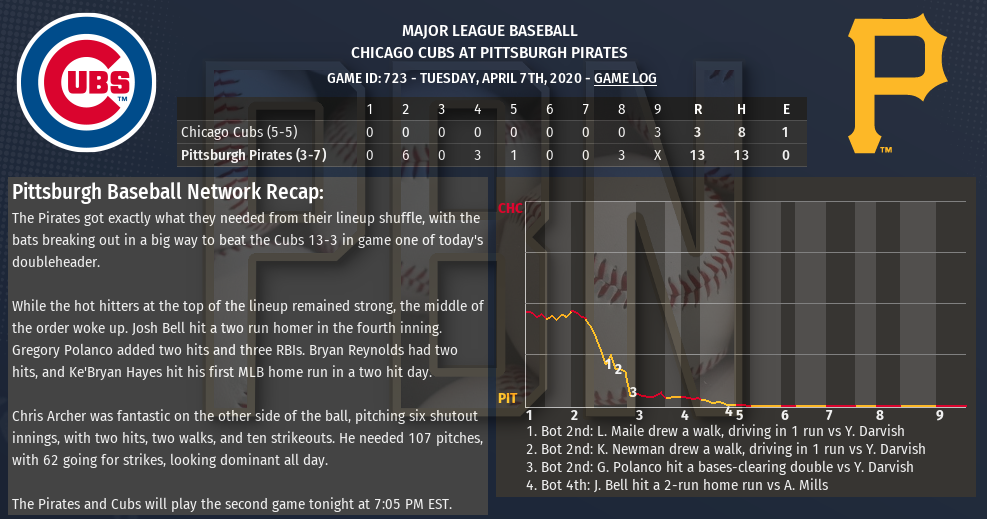 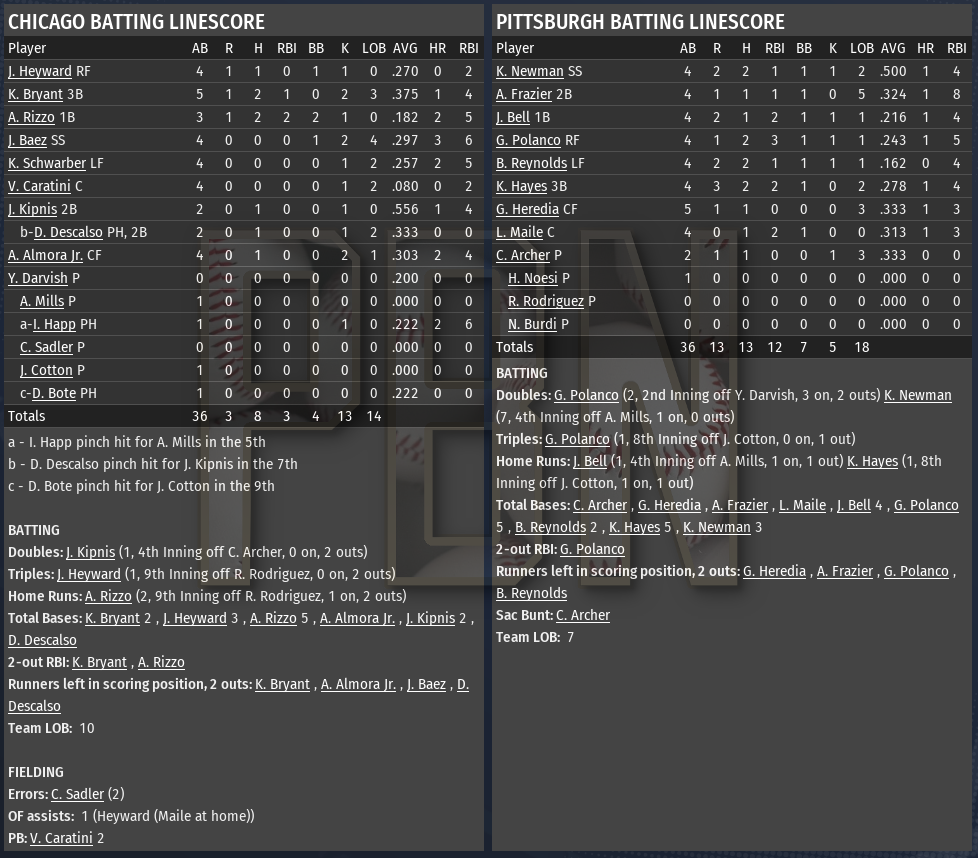 Check back tonight at 7:05 PM for the second game, with Chris Stratton on the mound.