The offense came from a different look lineup that featured Kevin Newman at the top. The Pirates will switch back for game two, with Jarrod Dyson in the game, and Newman back in the six spot.

Ian Happ led off the game for the Cubs by ripping the first pitch down the right field line for a double. Gregory Polanco got to the ball quickly as Happ rounded for third. Polanco made a strong throw from the right field corner, beating Happ and getting the first out. Kris Bryant singled up the middle. Stratton got Rizzo to strike out on a changeup.

Javier Baez hit a double off the wall in center, scoring Bryant from first. Stratton issued a walk, then got Willson Contreras to fly out to end the first.

Jarrod Dyson reached on an infield single to start the game for the Pirates. Frazier grounded out to short, leading to an out at second and no throw to first. Chatwood walked Josh Bell and Gregory Polanco to load the bases with one out for Reynolds.

Reynolds grounded to second, but the Cubs couldn’t complete the double play, allowing a run to score. Newman stepped up with runners at the corners and flew out to left field.

Jason Heyward flew out to center to start the inning. Albert Almora singled, and moved over to second on a sacrifice bunt by Chatwood. Happ popped out to second for the third out.

Chatwood struck out Stallings on an outside pitch. Ke’Bryan Hayes hit a double to right field. Stratton followed with a single up the middle. Hayes rounded third and went to score, but was thrown out at the plate. Stratton moved to second on the throw. Chatwood struck out Dyson to end the inning.

Stratton got Bryant to ground out, then walked Rizzo. Baez popped out in foul territory for the second out. Stratton struck out Schwarber for the third out.

Adam Frazier flew out to center to start the bottom half of the inning. Josh Bell struck out on a 2-2 cutter. Polanco flew out to left.

Stratton got a grounder back to the mound for the first out. Heyward singled through the right side of the infield. Almora hit a slow roller in front of the plate. Stallings went to second for the double play, but threw wild into center field, putting runners at second and third. Chatwood hit a single up the middle to give the Cubs the lead. Happ grounded into a double play to end the inning.

Reynolds led off the bottom half with a hard ground out to short. Newman grounded out to first. Stallings grounded to Baez, who threw low for the error. The ball went into the dugout, giving Stallings second base. Chatwood intentionally walked Hayes to get to Stratton, who grounded to third on a 2-1 pitch. Bryant booted the grounder, loading the bases. Dyson grounded into a 6-4 fielder’s choice.

Stratton got Bryant and Rizzo to fly out to start the inning, before giving up a double to Baez. Schwarber was intentionally walked, and Edgar Santana came on to pitch. Santana got Contreras to fly out to center field for the third out.

Chatwood set the middle of the Pirates’ lineup down in order, finishing with a strikeout against Gregory Polanco.

Chatwood struck out Reynolds, then got Newman to ground out to second. Stallings walked, then Hayes grounded out in front of the plate.

Neverauskas walked Rizzo, and the Pirates brought in Michael Feliz, who struck out Baez. A wild pitch allowed Rizzo to move to second. Feliz got Schwarber to fly out, and struck out Contreras.

Kevin Kramer came on to pinch hit. Chatwood struck him out for his sixth strikeout of the game. Jeremy Jeffress came on in relief to face the top of the order. Dyson hit a standup double, and scored on the next batter when Frazier hit a double to tie the score. Jeffress intentionally walked Bell.

Left-handed pitcher Brad Wieck came on to face Polanco with runners at first and second and one out. Polanco flew out to center and the runners held up. Bryan Reynolds hit a single to center and Dyson scored from second, giving the Pirates the lead. Newman drew a walk to load the bases, but Stallings struck out.

Keone Kela comes in to pitch the eighth inning. Heyward starts with a triple to left. Caratini flew out to shallow left, and Heyward held up at third. Jason Kipnis entered as a pinch hitter to replace Chatwood and walks. Happ hit an RBI single to left, tying the score.

Kyle Crick enters with runners at first and second, one out, and Bryant at the plate. Bryant was caught looking at strike three, while the runners both moved up with a double steal on the pitch. Crick intentionally walked Rizzo, and got Baez to fly out to center for the third out.

Brandon Morrow comes in for the Cubs. He got Hayes to ground out for the first out. Colin Moran entered as a pinch hitter for Crick and flew out to left. Dyson grounded out to send the game to the ninth, tied up.

Nick Burdi enters for the Pirates in the ninth. He starts off by giving up a double off the wall in center field to Schwarber. Contreras singled to right, moving Schwarber to third. Burdi got a pop out, then struck out pinch hitter David Bote on a 2-2 slider. With two outs and the go-ahead runner at third, Burdi threw a pitch that got past Stallings. Schwarber scored from third to give the Cubs the lead. Burdi got Kipnis to ground out.

Craig Kimbrel comes in to close it out for the Cubs. Adam Frazier grounds out to short for the first out. Josh Bell was caught looking at a fastball. Polanco flew out to right for the final out. 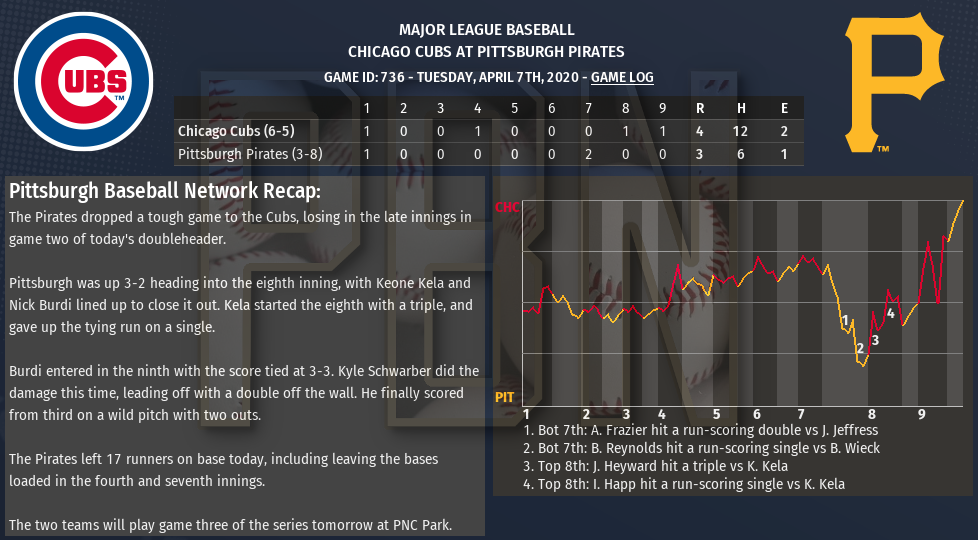 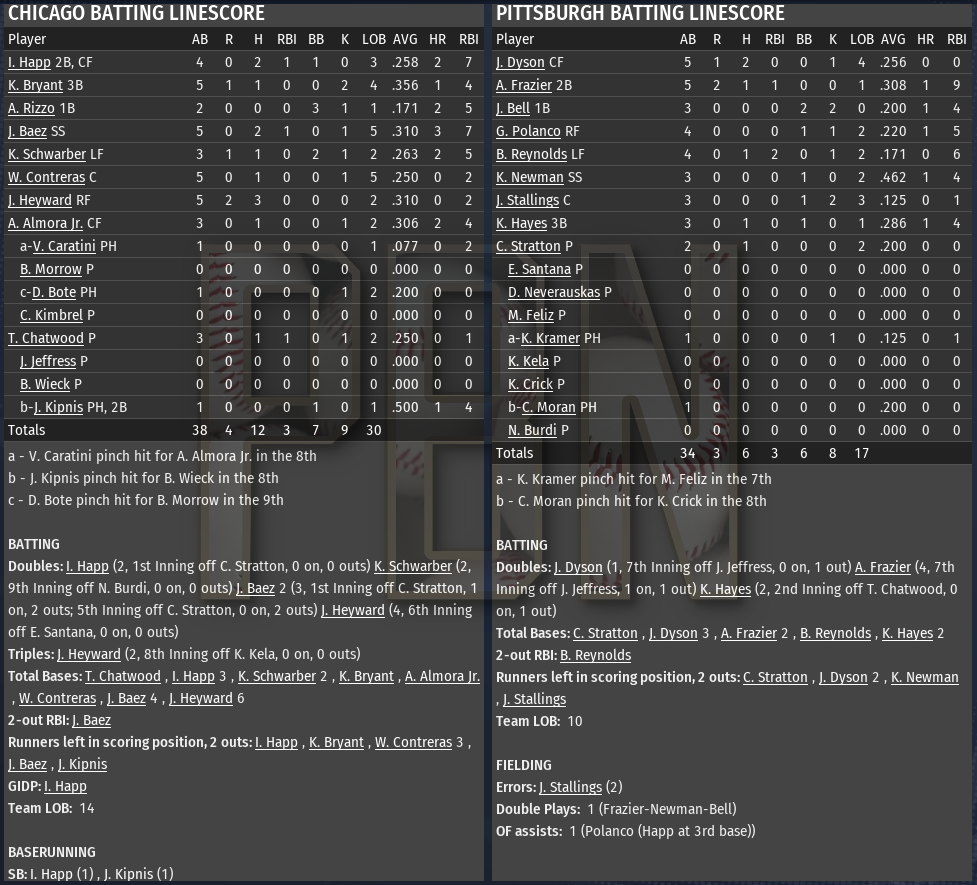 This was the first game of the year where the Pirates pitching didn’t give up a home run. 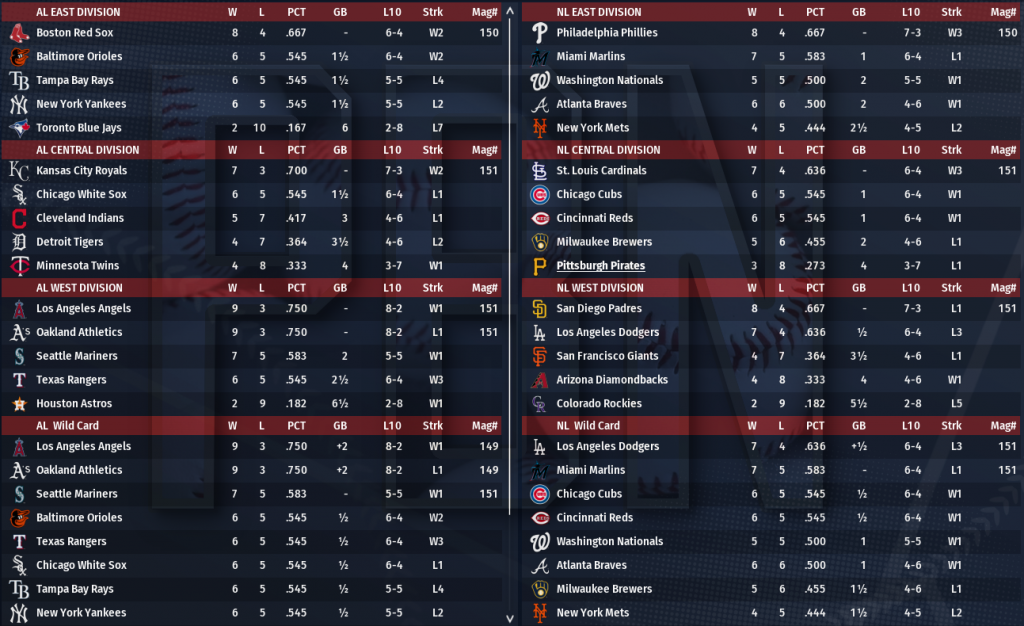 OOTP: Pirates Opens a Series Against the Mets

OOTP: Pirates Take on Clayton Kershaw in Final Game of Series With the Dodgers

OOTP: Musgrove Tries to Even the Series Against the Giants