OOTP: Pirates Look to Take Opening Series Against the Reds in Today’s Game

The Pirates take on the Reds today in the deciding game of the opening series between the two teams. The Pirates have started the 2020 season 2-6, while the Reds sit at 4-4.

Trevor Williams is on the mound for the Pirates, with right-handed pitcher Tyler Mahle pitching for the Reds.

As usual, the game is simulated on Out of the Park Baseball. Below are the results by inning, with full results at the bottom.

Trevor Williams made quick work of the Reds in the first inning. He got Joey Votto to fly out, Jesse Winker to ground out back to the mound, and struck out Eugenio Suarez on an 87 MPH slider.

Jarrod Dyson drew a walk to lead off the game for the Pirates. Adam Frazier flew out to center and Tyler Mahle struck out Josh Bell and Gregory Polanco to end the inning.

Williams gave up a one-out single to Nick Castellanos. He got Tucker Barnhart to ground to second for a potential double play, but Castellanos broke it up with a slide. Williams struck out Freddy Galvis on a curveball to end the inning.

Bryan Reynolds flew out to left to start the inning. Kevin Newman got the first hit of the game for the Pirates with a single to right field. He was erased when Jacob Stallings grounded into a 6-4-3 double play.

Shogo Akiyama started the third with a single to right. Mahle tried to bunt him over to second, but Josh Bell fielded the hard grounder down the first base line and threw to second to get the lead runner. Williams struck out Votto for the second out. Winker hit a single to right field, allowing Mahle to move to third. Suarez hit a three run homer on the second pitch to give the Reds a 3-0 lead. Williams got Moustakas to ground out to second to end the inning.

Ke’Bryan Hayes drew a leadoff walk and moved to second on a sacrifice bunt from Williams. Mahle struck out Dyson on a changeup. Adam Frazier hit a single through the right side of the infield, allowing Hayes to score from second. Josh Bell flew out to center field for the third out.

Jarrod Dyson got the first out of the inning with a sliding catch to rob Nick Castellanos of a hit. Williams got Barnhart to fly out for the second out of the inning. Galvis drew a walk on a changeup outside on a 3-2 count. Akiyama hit a double to the wall in left field, allowing Galvis to score from first. Mahle grounded out to third for the final out.

Polanco lined out to right, Reynolds flew out to left, and Newman struck out on a 1-2 slider, giving Mahle a quick inning.

Williams struck out Votto looking with a changeup to start the fifth. Winker and Suarez both grounded out to give Williams a clean inning.

Jacob Stallings reached on a throwing error to first, and moved to second on the throw. Mahle struck Hayes out looking. Kevin Kramer came up as a pinch hitter for Williams and drew a walk, putting runners on first and second. Akiyama saved some runs with a diving catch against Jarrod Dyson in center field. Frazier flew out to center to end the inning.

Dovydas Neverauskas comes on to pitch for the Pirates. He retired the side in order, striking out Tucker Barnhart looking to end the inning.

Josh Bell lined out to left field and Mahle struck out Polanco and Reynolds for a quick inning.

Neverauskas returned and got a fly out against Galvis for the first out. Akiyama walked on four pitches. Mahle bunted him over, but the ball got past the mound and Neverauskas couldn’t make the throw to first in time. Edgar Santana came on to pitch against Joey Votto and walks him to load the bases with one out. Winker flew out to Polanco, and Akiyama held up at third. Suarez flew out to right to end the inning.

Kevin Newman led off the bottom of the seventh with a double off the wall in center field. Jacob Stallings flew out to center for the first out. Ke’Bryan Hayes reached on an infield single to short, moving Newman to third. Colin Moran came on to pinch hit for Santana. Mahle picked off Hayes at first for the second out. Moran grounded out to short for the third.

Kyle Crick enters in the eighth and gets Moustakas to fly out to right for the first out. Crick struck out Castellanos and Barnhart flew out to left for the third out.

Right-handed pitcher Michael Lorenzen comes on to pitch the eighth inning for the Reds. Jarrod Dyson started the bottom of the inning with a single to left. He moved to second on a balk. Frazier lines out to left. Bell grounds out to second, with Dyson moving to third on the play. With a full count, Gregory Polanco hit a single to right, bringing in Dyson. Bryan Reynolds hit a high shot to right field, but it was caught at the warning track, just missing the tying home run.

Crick returned and struck out Galvis for the first out. Keone Kela came on and walked Akiyama. After a strikeout, Kela got Votto to line out to first.

Raisel Iglesias comes on to close out the two run lead for the Reds. Kevin Newman starts the inning with a single. Iglesias strikes out Stallings for the first out. Hayes grounded to short, leading to a 6-4 putout of Newman. The trainer came out to examine Newman’s left knee, but he was able to walk off the field and stay in the game. Guillermo Heredia entered as a pinch hitter and struck out to end the game. 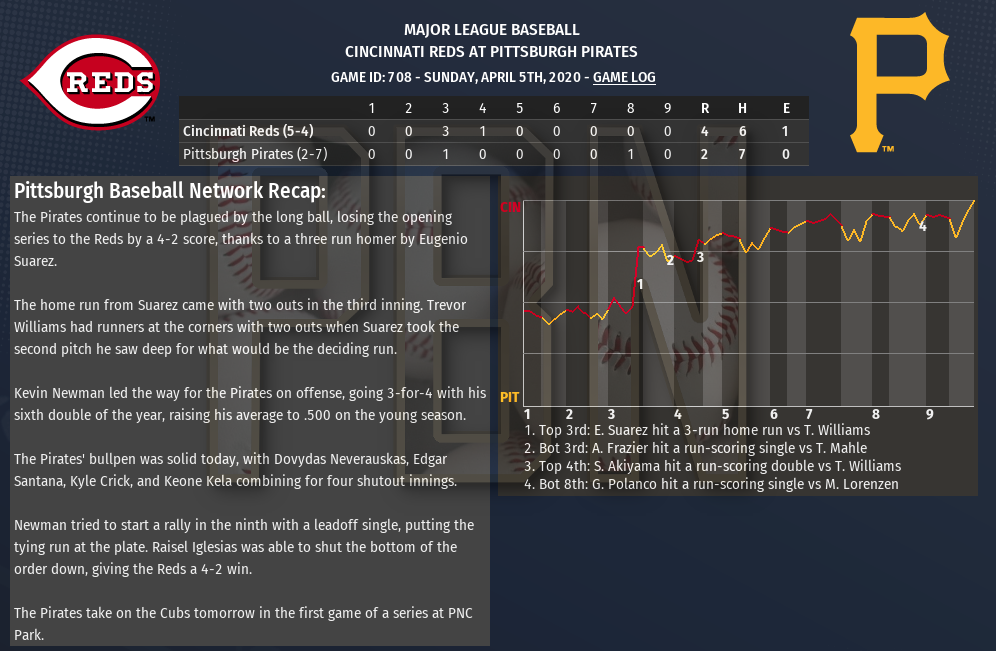 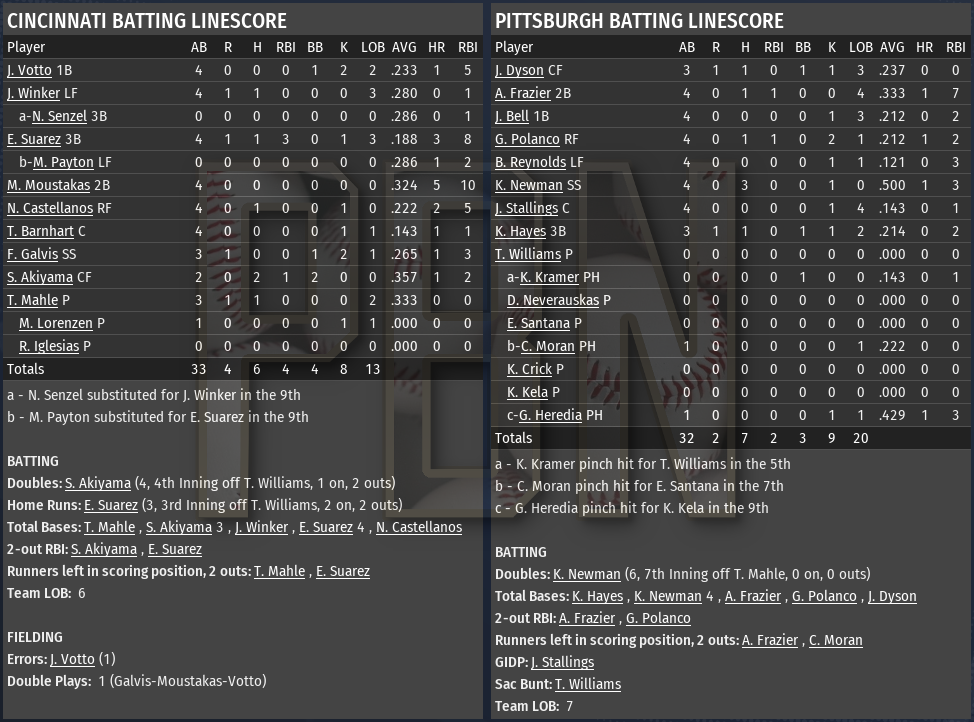 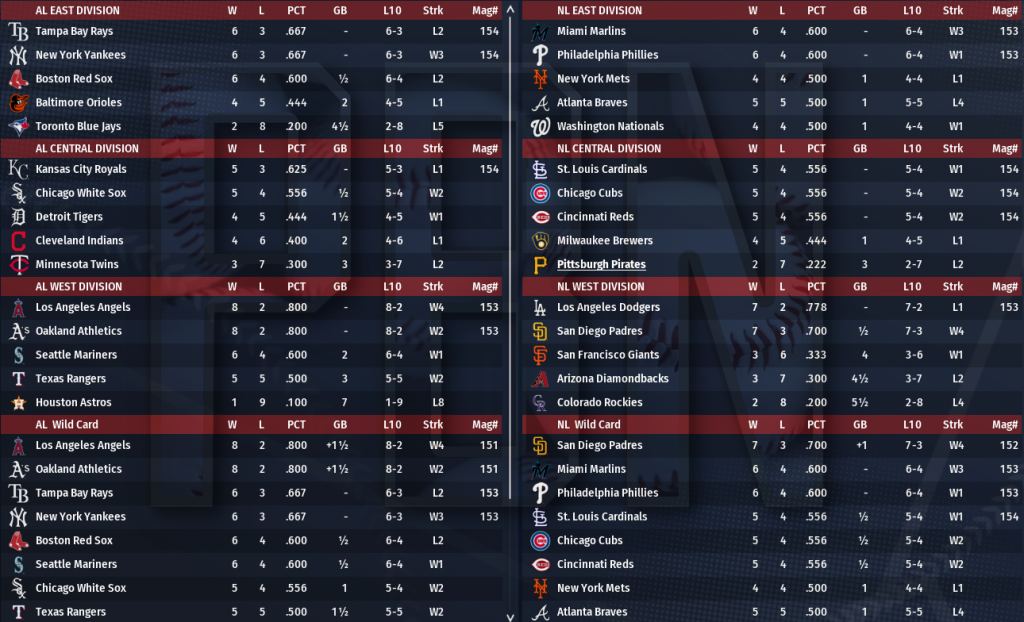 The Pirates take on the Cubs tomorrow at 7:05 PM EST in the first game of a four game series at PNC Park. Chris Stratton (1-0, 2.57) will go against Tyler Chatwood (0-1, 5.40). The Pirates will send Chris Archer, Joe Musgrove, and Mitch Keller out in order in games 2-4 of the series.

We’ll have a prospect update tomorrow morning, looking at the 2020 and 2025 seasons.