OOTP: Mitch Keller Takes the Mound on His 24th Birthday

The Pittsburgh Pirates (2-5) take on the Cincinnati Reds (3-4) in the second game of this year’s opening series at PNC Park. The Pirates beat the Reds in the opener on Thursday, winning by a score of 4-2.

Mitch Keller takes the mound for the Pirates today, on his 24th birthday. He’ll go up against Reds starter Luis Castillo.

Below are the game results, as simulated by Out of the Park Baseball. You can either follow along by inning, or skip to the end for the full results.

Keller started the game by walking Joey Votto on a 3-2 changeup that was inside. Jesse Winker hit a single to center, moving Votto to second. Eugenio Suarez hit a line drive single to center field, but Votto had to hold up at second, and was only able to move to third.

With the bases loaded and no outs, Keller got Mike Moustakas to pop out in the infield, with the ump calling the infield fly rule. Keller followed by getting Nick Castellanos swinging on a 1-2 fastball. Tucker Barnhart lined a drive to right field, but Gregory Polanco charged back and to his right and made a leaping catch to escape the jam.

Luis Castillo started his outing by striking out Jarrod Dyson on three pitches. Adam Frazier grounded out to second. Castillo worked a full count against Josh Bell, and got him swinging on a 92 MPH slider.

Keller had a much easier inning in the second, getting three straight ground ball outs to retire the Reds in order.

Gregory Polanco led off the bottom of the inning with a hard grounder up the middle. Freddy Galvis fielded it, but dropped the ball for his third error of the season, allowing Polanco to reach safely. Castillo followed by striking out Bryan Reynolds for the first out. Kevin Newman grounded into a 6-4-3 double play on a first pitch, 99 MPH fastball.

For the second time in as many plate appearances, Keller took Votto to a full count and walked him. This time Keller missed low with a fastball. Jesse Winker singled to center, allowing Votto to move to third. Keller got his first out by getting Eugenio Suarez swinging on a 96 MPH fastball. Mike Moustakas few out to shallow left field, and Votto couldn’t score on the play. Keller struck out Castellanos on an 87 MPH slider to end the inning.

Ke’Bryan Hayes started the inning by grounding weakly back to the mound. Luke Maile grounded out to short. Castillo got Keller to ground out to second to end the inning.

With a 1-1 count, Keller gave up a solo homer to Tucker Barnhart, which flew over the Clemente Wall in right field. Keller followed up by walking Freddy Galvis on four pitches. He struck out Senzel on a 1-2 curveball for the first out. Luis Castillo sacrificed Galvis over to second with a bunt.

Votto came up with two outs and hit a hard grounder through the right side of the infield, allowing Galvis to score. Keller got Winker to ground out to second for the third out.

Jarrod Dyson started the fourth inning with a single to right field, giving the Pirates their first hit of the game. Adam Frazier erased the hit with a 6-4-3 double play. Josh Bell popped out to shallow center field for the third out.

Gregory Polanco made a diving catch to rob Eugenio Suarez of a hit. With both the infield and outfield shifted to the right, Mike Moustakas found some open grass, hitting a hard line drive double down the left field line. Keller intentionally walked Castellanos. He struck out Barnhart for his fifth strikeout of the day.

Galvis came up and hit a single to center. Moustakas beat the throw home from Dyson, giving the Reds a 3-0 lead. Right-handed pitcher Hector Noesi came on in relief and gave up an RBI single to Senzel. He got a strikeout to end the inning.

Gregory Polanco led off the bottom of the fifth with a solo home run down the right field line. Castillo followed by striking Bryan Reynolds out on three pitches. Kevin Newman hit a one-out double to the wall in left field. Ke’Bryan Hayes flew out to left, with Newman tagging and moving up to third. Castillo walked Luke Maile on a 3-2 pitch. Kevin Kramer came on to pinch hit for Noesi and flew out to right.

Kyle Crick enters the game to pitch for the Pirates. Votto singled past the mound on a weak grounder that Newman couldn’t get to. Crick got Winker to ground out to first, with Votto running on the pitch and moving up to second. Suarez grounded out to short, and Moustakas struck out swinging on a fastball to end the inning.

After a Dyson ground out, Adam Frazier hit a double down the left field line. Josh Bell moved him over on a ground out to the right side. Polanco flew out to right to end the inning. Castillo is sitting at 70 pitches after six innings.

Crick returned for the seventh. He walked Castellanos, then struck out Barnhart. Edgar Santana came on in relief to pitch to Galvis, and got him to ground out to first. Bell tried to get Castellanos with a throw and a tag at second, but the throw wasn’t in time. Senzel walked and Castillo flew out to center for the third out.

Reynolds started the seventh inning with his third strikeout of the day. Newman hit a soft liner to second, which was caught by Moustakas. Hayes grounded out to second for the third out.

On an 0-2 pitch, Edgar Santana hit Joey Votto in the back with a slider. Here we go. Santana got Winker to ground into a 4-6-3 double play. He walked Suarez, but struck out Moustakas on a 97 MPH fastball.

Luke Maile led off the bottom of the 8th with a solo homer to right field. Colin Moran came on as a pinch hitter, and Castillo struck him out with his 85th pitch of the day. Dyson hit an infield single to short, with no attempt at a throw from Galvis. Frazier struck out on a high, 98 MPH fastball. Dyson stole second on the pitch. Josh Bell ended the inning with a liner to second.

Richard Rodriguez entered in relief of Santana. He gave up a solo homer to Castellanos on a 1-0 pitch. Barnhart followed with a double off the wall in left field. Galvis struck out, and Senzel hit a single to center, moving Barnhart to third with one out. Derek Dietrich entered as a pinch hitter and hit an RBI double down the line in right, moving Senzel to third.

Dovydas Neverauskas replaced Rodriguez to face Votto. Votto hit a double to the left field wall, bringing in two more runs. Winker hit a line drive to center, but was robbed by a diving catch from Dyson. Saurez flew out to left to end the inning with the Reds leading 8-2.

Nate Jones came on to pitch for the Reds in the 9th. He walked Polanco, then struck out Reynolds swinging on an 84 MPH slider. Newman grounded out to second, moving Polanco up. Hayes ripped a two-out double to the right-center field gap to score Polanco. Maile hit a weak grounder up the middle, and Galvis couldn’t make a play on it, putting runners at first and third.

Guillermo Heredia entered as a pinch hitter and hit a three run homer to center field, bringing the Pirates to within two runs, with the top of the order up.

Raisel Iglesias enters the game to pitch for the Reds, needing one out for the win. He got Dyson to ground out to second on an 0-1 pitch to end it. 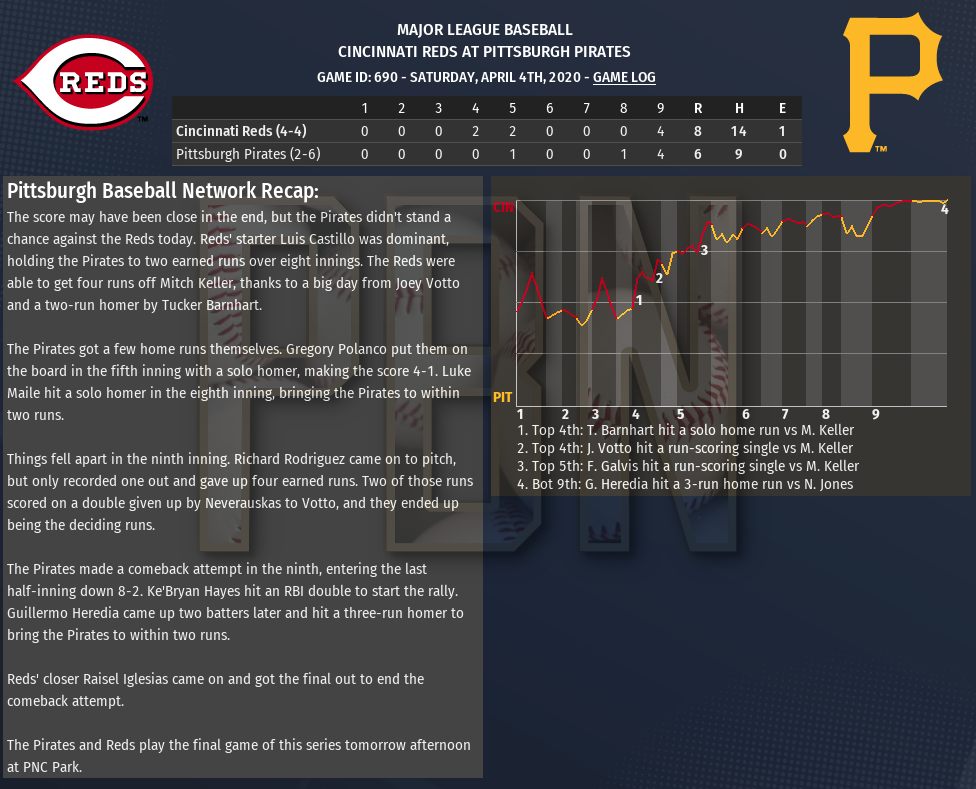 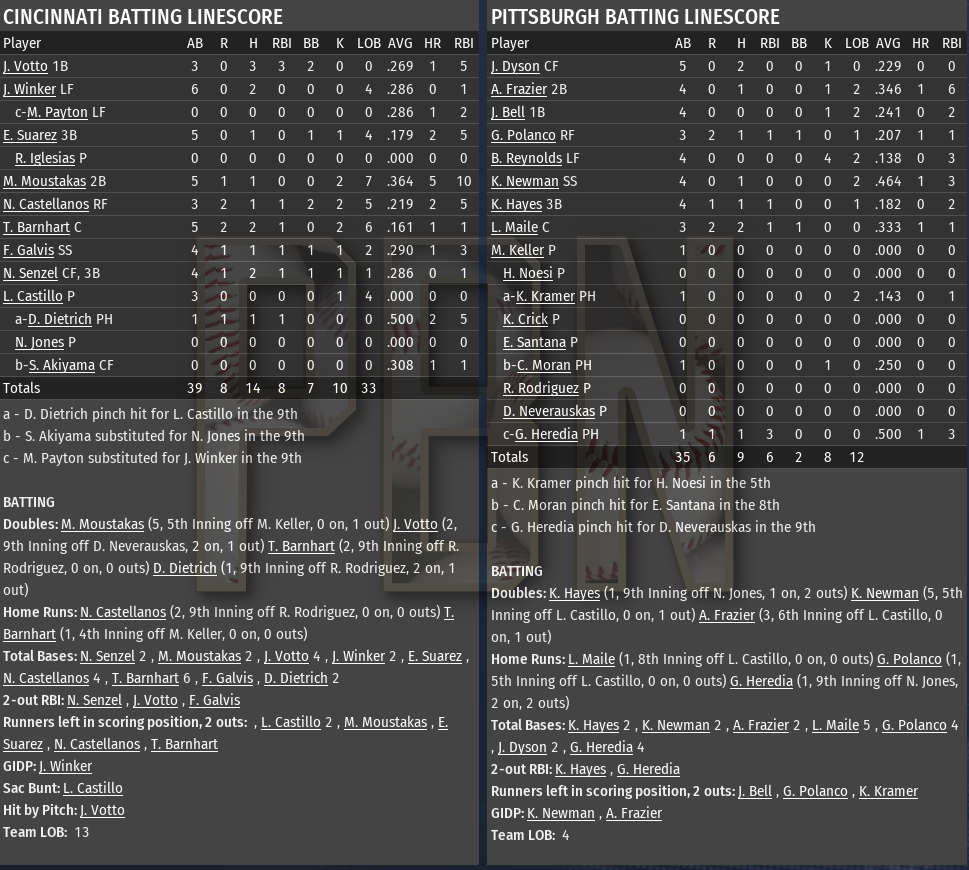 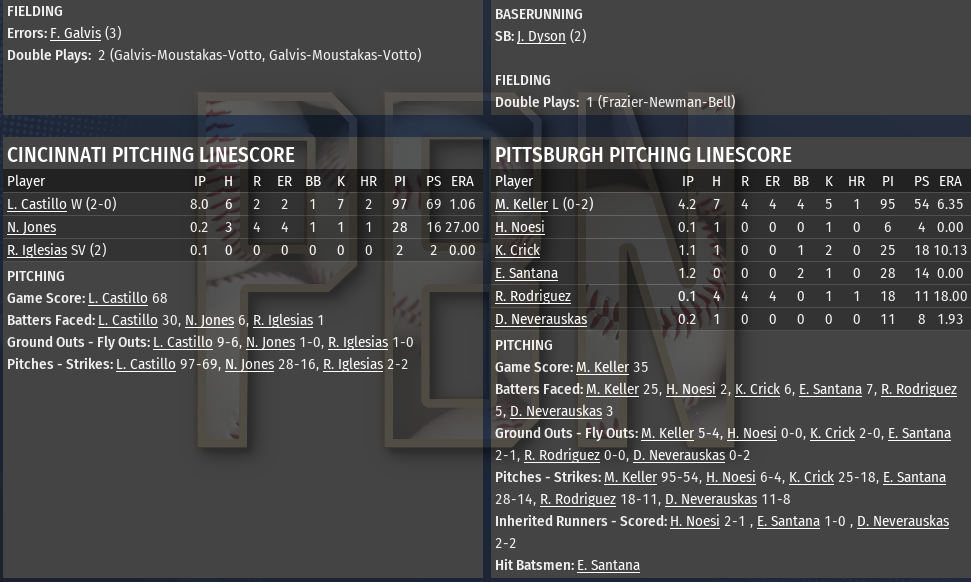 Erik Gonzalez has cleared waivers and was assigned to Indianapolis. 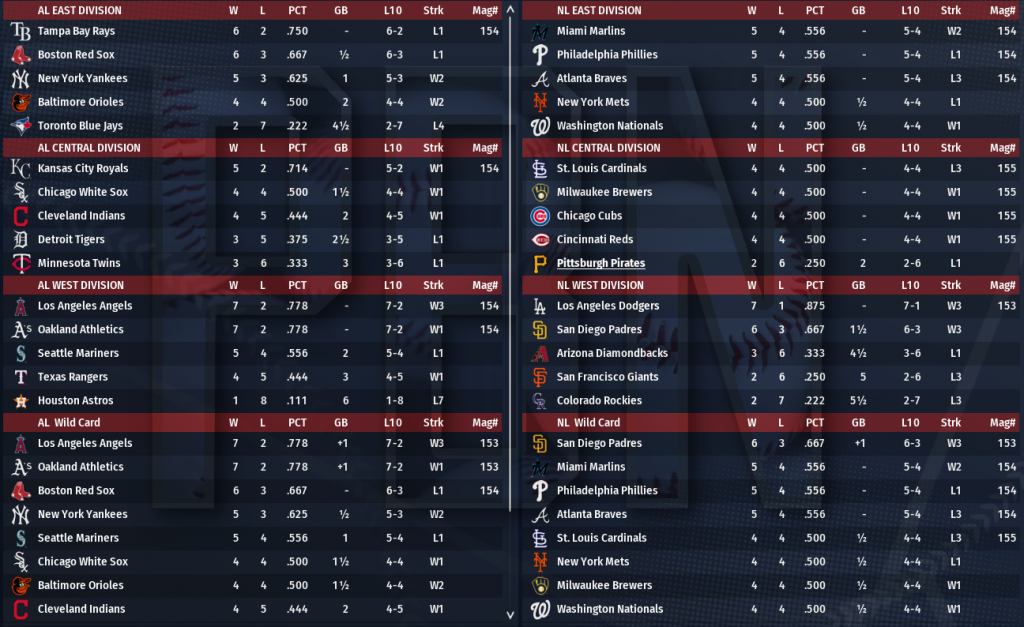 We’ll have our first daily 2025 simulation update later today. Mitch Keller is on the mound for that one as well.