OOTP: The Pirates Take on the Reds in the Home Opener at PNC Park

Today would have been the home opener in Pittsburgh if there was baseball being played. Fortunately, even though baseball isn’t being played right now, you can still follow the game.

We’ve been simulating the 2020 season every day as it was originally scheduled, using Out of the Park Baseball (OOTP) for the simulated results. The full results are available every day at the scheduled game time.

The Pirates are off to a 1-5 start this year, and take on the Reds today at 1:35 PM in the home opener at PNC Park. Since this is a special game, I’ll be posting the results live, rather than posting the full game results at once.

Here are the lineups for today’s game:

Joe Musgrove started the game by getting Joey Votto to ground out to second. After giving up a line drive single to Nick Senzel, Musgrove got Mike Moustakas to strike out swinging on a 94 MPH fastball. He caught Nick Castellanos looking at a 1-2 fastball for the third out.

Trevor Bauer put the Pirates down in order, getting three straight groundouts against Jarrod Dyson, Ke’Bryan Hayes, and Josh Bell.

Musgrove strikes out his third batter in a row, setting Derek Dietrich down on an 0-2 check swing on a 90 MPH fastball. Tucker Barnhart followed with a single to right field. Musgrove got Freddy Galvis to ground into a 4-6-3 double play to end the inning.

Gregory Polanco led off the inning by lining a 2-2 pitch over the second base bag into center field for a single. Trevor Bauer got Jacob Stallings to ground into a 6-4-3 double play, erasing Polanco’s single. Guillermo Heredia delivered a two out single up the middle. Kevin Kramer followed with another single up the middle, putting runners at first and second.

Trevor Bauer delivered a low and outside 97 MPH fastball that went to the backstop, allowing both runners to move up. With a 3-2 count, JT Riddle grounded out to second to end the inning.

Shogo Akiyama led off the third with an infield single to second. Trevor Bauer laid down a sacrifice bunt, putting Akiyama at second with Joey Votto coming up. Musgrove got Votto swinging on a 94 MPH fastball for his fourth strikeout of he game. Nick Senzel grounded out to second to end the inning.

Trevor Bauer got three straight ground ball outs to set the Pirates down in order.

Musgrove got Mike Moustakas to ground out to second for the first out. He walked Nick Castellanos on four pitches. Derek Dietrich followed with a home run over the wall in left field, putting the Reds up 2-0. Musgrove recovered with a fly out and his fifth strikeout of the day.

Bauer set the Pirates down in order, with two fly outs and a ground out.

Musgrove started the fifth inning by striking out Akiyama on a 92 MPH fastball. Trevor Bauer ripped a single over the head of a leaping Ke’Bryan Hayes. Musgrove got the next two batters out to end the inning. He finishes the 5th inning at 87 pitches on the day.

Guillermo Heredia started the fifth with a single to right field. After Kevin Kramer flew out, JT Riddle ripped a double off the wall in center field, moving Heredia to third base. Musgrove stayed in the game and hit a two-RBI single to right-center to tie the score.

Jarrod Dyson hit a bloop fly ball to shallow left field. Freddy Galvis was under it, but bobbled the ball. Musgrove moved into scoring position, putting runners at first and second with one out. Bauer struck out Ke’Bryan Hayes and Josh Bell.

Musgrove started the inning by getting Mike Moustakas to ground out to second. Castellanos grounded out to short for the second out. Dietrich lined a single to left field for his second hit of the game, following his two-run homer last time up. Richard Rodriguez came on in relief and struck out Tucker Barnhart.

Gregory Polanco led off the bottom of the sixth with a single through the right side of the infield. Bauer struck out Jacob Stallings for the first out. He threw another wild pitch to the backstop, allowing Polanco to move up to second with one out. Heredia hit a shallow fly out to right field, and Polanco stayed at second with two outs. Kevin Kramer grounded out to first to end the inning.

Rodriguez returned to the mound in the seventh. He struck out Freddy Galvis on a nice 69 MPH curveball. Rodriguez followed with a swinging strikeout against Akiyama on a 95 MPH fastball. The Reds stuck with Bauer, who grounded to third for the final out.

Stretch Time! Trevor Bauer will enter the bottom of the 7th at 88 pitches on the day, with JT Riddle, Richard Rodriguez, and Jarrod Dyson due up.

Riddle grounded out to shortstop on the first pitch of the inning. Adam Frazier came on to pinch hit for Richard Rodriguez. Bauer hit Frazier in the back with a 2-2 pitch. Jarrod Dyson followed with a single to right field, putting the go ahead run on third with one out.

Ke’Bryan Hayes ripped a single to left field for his first MLB hit, bringing in Frazier from third to give the Pirates the lead.

Josh Bell followed with a single, bringing in Dyson from second to make the score 4-2. Gregory Polanco walked to load the bases. The Reds went to Pedro Strop, ending Bauer’s day. Strop got Jacob Stallings to hit a roller back to the mound, and was able to get Hayes out at home. Guillermo Heredia ended the inning with a ground out to short.

Michael Feliz comes on to pitch the top of the 8th inning, facing Joey Votto. Feliz walked Votto on an outside fastball on a 3-2 count. Feliz got Nick Senzel to chase on a slider outside of the zone for the first out. He walked Mike Moustakas on another 3-2 pitch, putting the tying run on first with one out.

Nick Burdi comes on in relief and gets Castellanos to fly out to center field for the second out. Votto moved up to third base after the catch. Burdi got Dietrich on a check swing on a 97 MPH fastball to end the inning.

The Pirates double-switched Burdi in the game, putting him in the six spot in the lineup in place of Heredia. Bryan Reynolds is the new left fielder, batting ninth, and due up third this inning.

Strop got Kevin Kramer swinging for the first out. JT Riddle flew out to center field for the second out. Reynolds lined out to right for the third out.

Nick Burdi will remain in the game, trying for the five out save.

Burdi gets Tucker Barnhart swinging on a high, 98 MPH fastball for the first out.

Freddy Galvis followed with a double off the wall, bringing up Akiyama as the tying run. Burdi walks Akiyama on four pitches to put the tying run on base.

Josh VanMeter comes in to pinch hit for Strop. Burdi gets him swinging on an 89 MPH slider on a full count for the second out.

Joey Votto comes to the plate with two outs and the tying run on first base. The Pirates go to Keone Kela to face Votto. Kela gets Votto to ground out to second to end the game with the Pirates winning 4-2. 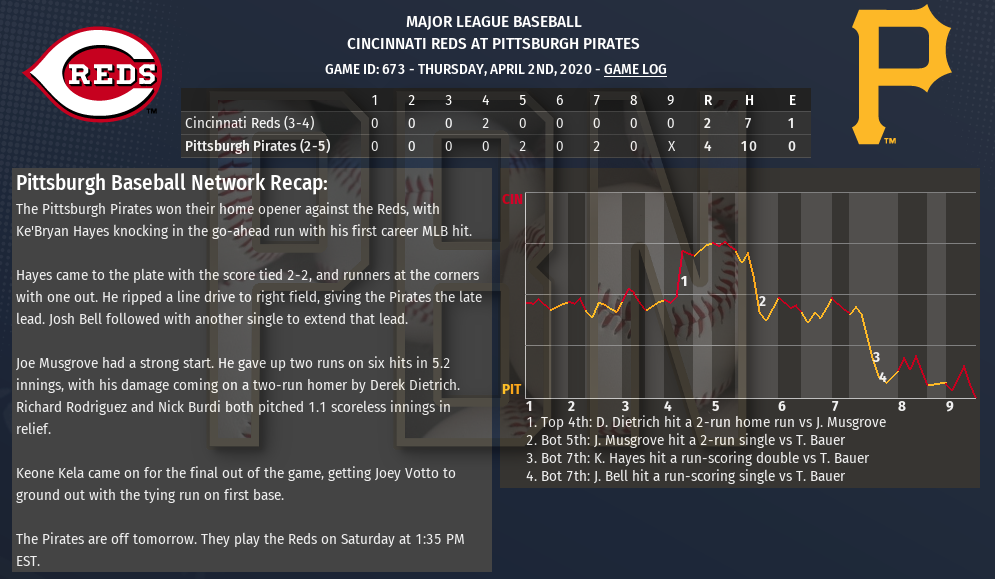 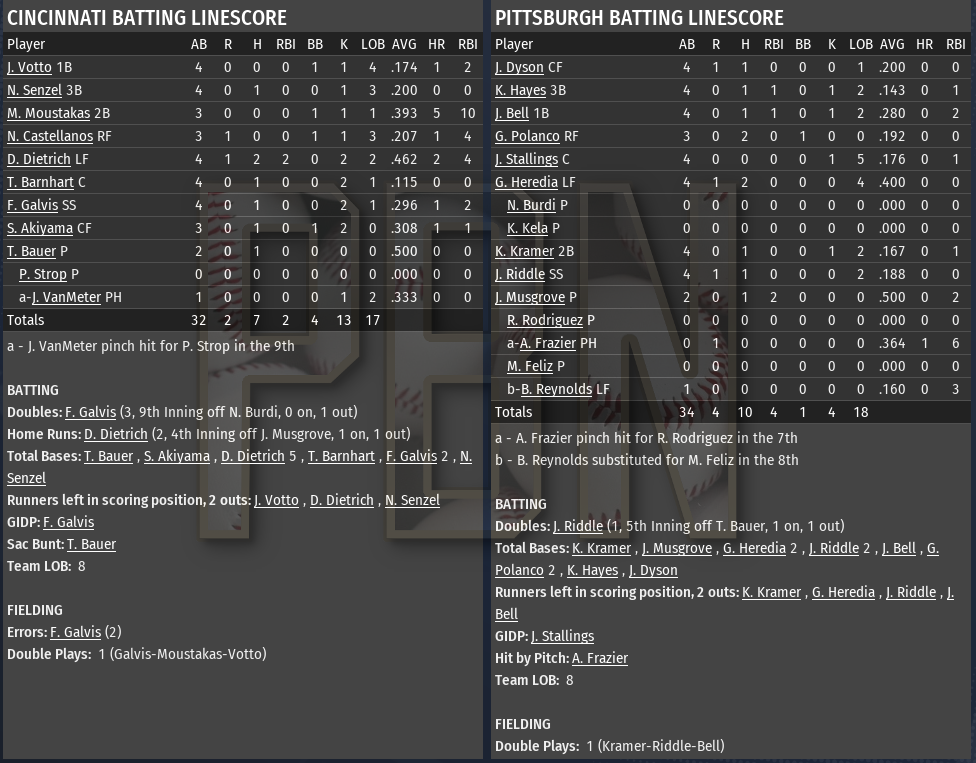 The Pirates will find out whether Erik Gonzalez cleared waivers before their next game on Saturday. 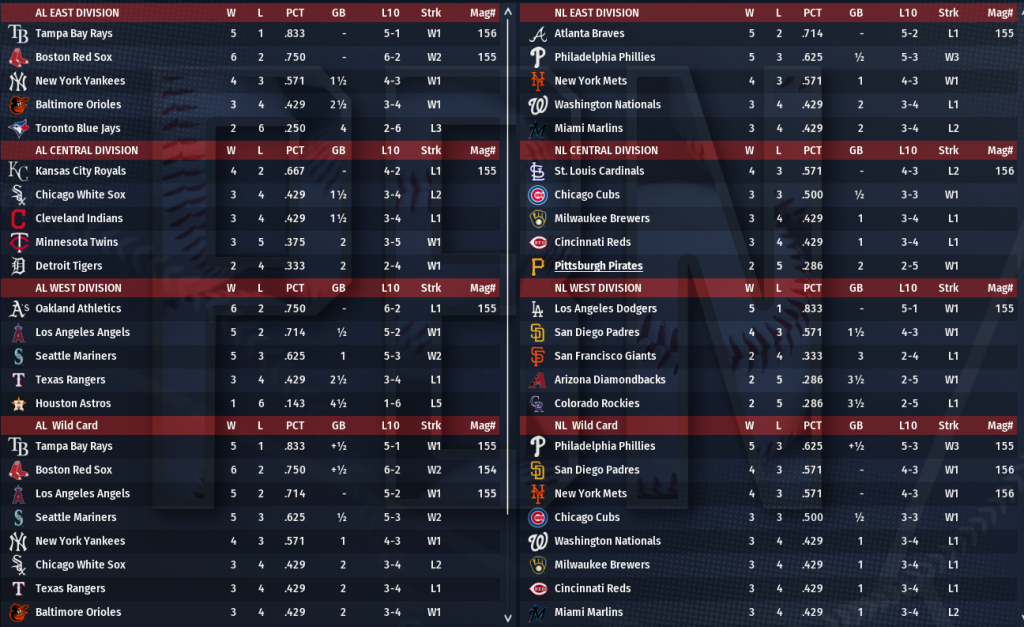 The Pirates are off tomorrow. We’ll have a live discussion tomorrow afternoon about the 2025 simulation.