OOTP: Ke’Bryan Hayes Makes His MLB Debut Today For the Pirates Against the Cubs

Prior to the game against the Chicago Cubs, the Pirates called up top hitting prospect Ke’Bryan Hayes. The third base prospect is making his MLB debut today, starting at third and batting seventh.

Erik Gonzalez was designated for assignment and placed on waivers to make room for Hayes on the active roster. The move is a bit of a surprise, as Gonzalez started off with an .804 OPS in 16 plate appearances. That’s hardly a large sample size, but I doubt it would play out like that in real life.

The Pirates also purchased the contract of Hector Noesi from Indianapolis and optioned Blake Weiman to Altoona. Weiman gave up five earned runs in 3.1 innings over three appearances this year.

Coronavirus is providing the worst April Fool’s joke of all, making all of this impossible to see in real life. But we’ve been simulating the Pirates’ 2020 season every day, using Out of the Park Baseball (OOTP).

When I opened the simulation up on April 1st, I saw those transactions. Below is the debut of Hayes, as the Pirates (1-4) take on the Cubs (2-3) in the rubber match of this three-game series. Chris Archer takes the mound for the Pirates, going up against Yu Darvish.

Darvish set the Pirates down in order to start the game.

Ian Happ tested Ke’Bryan Hayes to start the game by laying a bunt down the third base line. Hayes made a charging play and got Happ for the first out. Archer followed by striking out Kris Bryant on a 93 MPH fastball.

Anthony Rizzo and Javier Baez followed with back-to-back singles, putting runners at first and third with two outs. Archer walked Kyle Schwarber to load the bases, bringing up Jason Heyward. Archer walked Heyward on a 3-1 pitch, putting the Cubs up 1-0. He got Victor Caratini to ground out to first to end the inning.

Darvish got Polanco and Reynolds to ground out, before giving up the first hit of the game to Kevin Newman, who singled on a line drive to center. That brought up Ke’Bryan Hayes for his first MLB at-bat. Hayes grounded to short for a 6-4 fielder’s choice to end the inning.

Archer put the Cubs down in order in the second inning.

Darvish struck out Luke Maile and got Archer to ground out to third. He finished the inning by getting Dyson to fly out to left.

Archer led off the inning by walking Kris Bryant. He followed that by getting Anthony Rizzo to fly out to right. Javier Baez grounded into a double play to end the inning.

Darvish set the Pirates down in order, including a strikeout against Adam Frazier to lead off the frame.

Archer walked Schwarber to start the inning, but erased it with a 4-6-3 double play against Heyward. He got Caratini to pop out to Kevin Newman in shallow left field.

Darvish set the first two batters down, bringing up Hayes for his second at-bat. Hayes ripped a hard grounder to third base, but it was fielded for the 5-3 putout.

Archer struck Albert Almora Jr. out to start the fifth. He got Darvish to fly out to left. Ian Hap grounded to second, but Adam Frazier booted the grounder, allowing Happ to reach with two outs. Archer followed by giving up a line drive single to left field against Bryant, putting runners at first and second. Archer got Rizzo to fly out to the warning track in left field to end the inning.

Luke Maile took a 3-1 pitch outside for ball four to lead off the inning. He was moved to second on a sacrifice bunt by Archer. Darvsh caught Dyson looking for a strikeout. He then clipped Frazier with a pitch, putting runners on first and second with two outs and Josh Bell at the plate. Bell flew out to center on a 1-1 pitch to end the inning.

Javier Baez started the sixth inning with a line drive single to left field. Archer struck out Schwarber on three pitches for the first out. He then got Heyward to ground into a 4-6-3 double play.

Darvish got Polanco to line out to left field, and Reynolds and Newman to ground out. He finished the inning at 96 pitches, and due up third in the bottom half.

Archer got Caratini to ground out to Hayes for the 5-3 putout. Almora grounded out to second. The Cubs stuck with Darvish, who singled to left field. Ian Happ flew out to center to end the inning. Archer finished his inning at 91 pitches, also due up third.

Jeremy Jeffress came on to pitch for the Cubs in the eighth. He retired Hayes on a liner to first base. Maile grounded out, which brought up Colin Moran as the pinch-hitter for Archer. Moran flew out to shallow center field.

Keone Kela came on to pitch for the Pirates. He got Bryant to fly out to right, Rizzo to fly out to center, and struck out Baez chasing on a 99 MPH, 3-2 fastball.

The Pirates enter the final inning down by a run with the top of their order up. Craig Kimbrel comes on to close it out for the Cubs.

Jarrod Dyson started with a hard grounder through the left side of the infield for a single. Frazier followed with a single to right, moving Dyson to third with no outs, and bringing up Bell. A wild pitch by Kimbrel brings in Dyson to tie the score, and moves Frazier up to second. Kimbrel intentionally walked Bell to put runners at first and second with no outs.

Gregory Polanco struck out on a 100 MPH fastball. Bryan Reynolds flew out to left field for the second out, bringing up Newman. Kimbrel got Newman to line out to right field, sending the tie game to the bottom of the ninth.

Kela returned to the mound and struck out Schwarber looking at a 97 MPH fastball. He walked Heyward on four pitches. Michael Feliz came on to pitch against Caratini and gave up a single to center, putting runners at first and second with one out. Jason Kipnis came on as a pinch hitter and delivered a walk-off single to right to end the game. 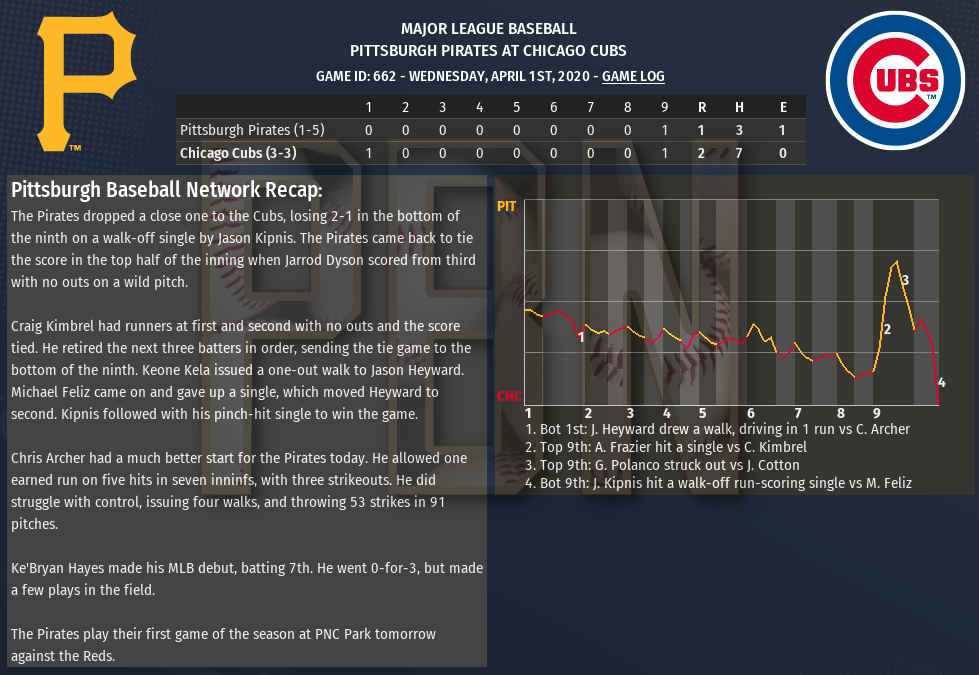 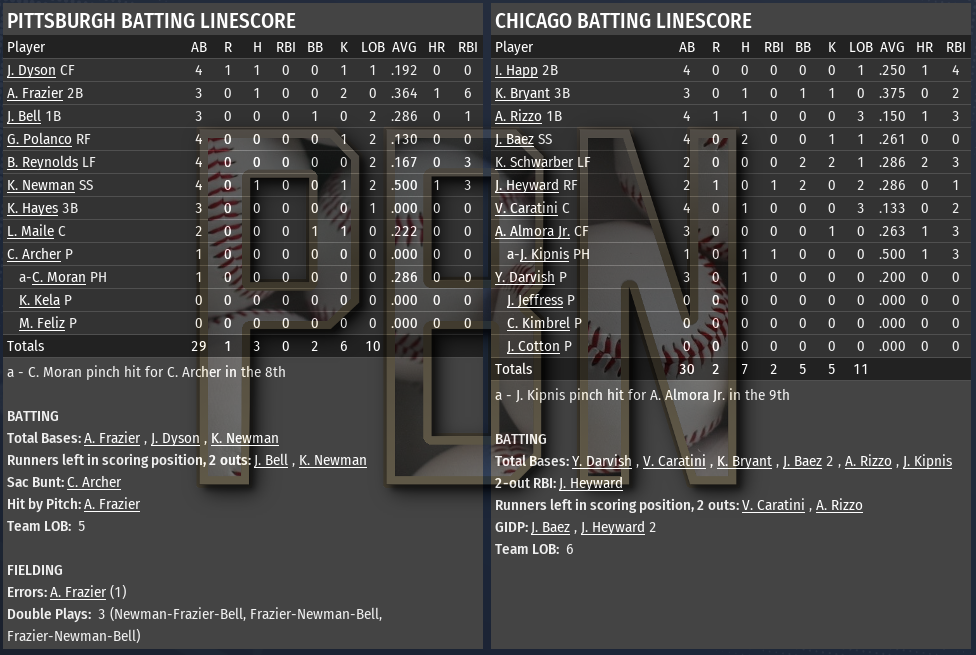 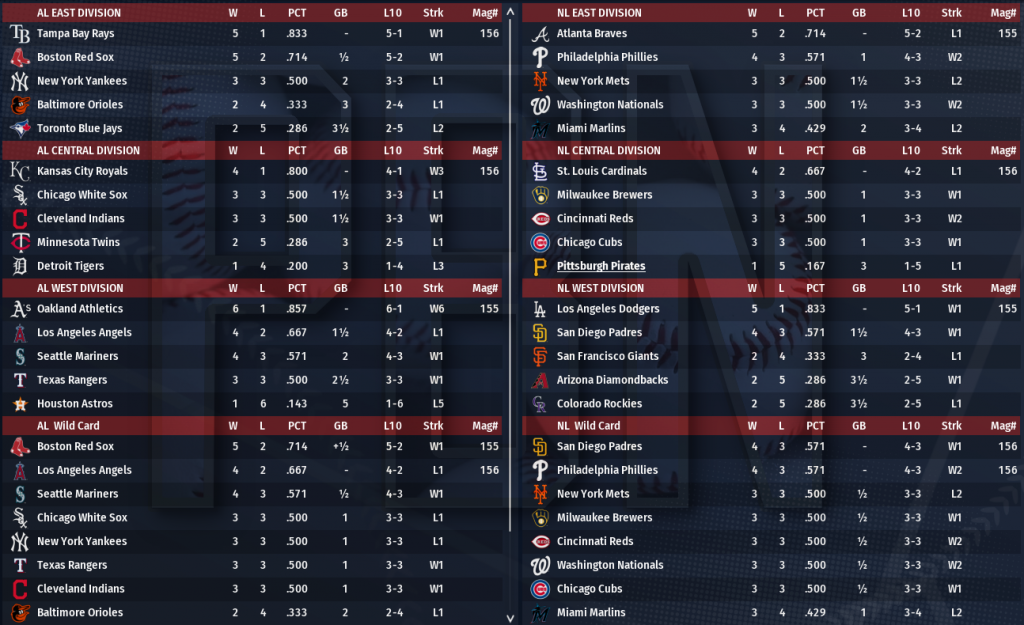