OOTP: Pirates Search For Their First Win of the Season Tonight Against the Cubs

The Pittsburgh Pirates have started the season 0-4 in our daily Out of the Park Baseball (OOTP) simulation of the 2020 season.

Chris Stratton takes the mound today for the Pirates, going up against Cubs right-hander Tyler Chatwood.

The inning-by-inning breakdown is below if you want to follow the game. Or you can skip to the bottom to see our quick recap and results (along with some interesting news and rumors.)

Adam Frazier drew a one-out walk, which was followed by a double off the left field wall by Josh Bell. Tyler Chatwood followed by striking out Gregory Polanco and Bryan Reynolds to get out of the inning.

Chris Stratton started off the inning with singles to Jason Heyward and Kris Bryant. He got Anthony Rizzo to ground into a double play, and got Javier Baez to ground out to third to escape the jam.

Kevin Newman led off the second with a double to the right-center gap. Chatwood got Jacob Stallings to fly out to left, Colin Moran to ground out to short, and Chris Stratton to fly out to right to escape without any runs.

Kyle Schwarber took a 1-1 fastball from Chris Stratton deep, homering 397 feet to right field to put the Cubs up 1-0. Stratton gave up a one-out walk to Jason Kipnis, but had no further damage.

Jarrod Dyson started off with a strikeout. Adam Frazier followed with a stand-up double. Josh Bell took a 3-2 pitch outside for ball four, putting runners on first and second. Gregory Polanco hit a ground ball, resulting in an out at second. Josh Bell broke up the double play with his slide, putting runners at the corners with two outs. Bryan Reynolds flew out to center to end the inning.

Stratton retired the side in order in the third, with two straight ground outs to Colin Moran at third base to end the inning.

Tyler Chatwood put the Pirates down in order in the fourth, getting Kevin Newman, Jacob Stallings, and Colin Moran.

Stratton also retired the side in order in the bottom half of the inning. He ended the inning at 51 pitches for the game so far.

Jarrod Dyson hit a one-out triple to the wall in right field. Adam Frazier followed by ripping a 1-0 pitch down the left field line for a double, tying the score. The Cubs intentionally walked Josh Bell to put runners on first and second with one out. Gregory Polanco struck out, bringing up Bryan Reynolds with two outs.

Reynolds connected on a line drive triple to the left-center gap, scoring both Frazier and Bell, and putting the Pirates up 3-1. Chatwood walked Kevin Newman and retired Jacob Stallings to end the inning.

Stratton was a ground ball machine in the fifth, getting three straight grounders. Albert Almora Jr. reached for a single on a slow grounder to second, but was erased by a 6-4-3 double play against pinch hitter David Bote, who replaced Chatwood with two outs.

Left-handed pitcher Brad Wieck came on in relief and set the Pirates down in order, striking out Dyson to end the inning.

Jason Heyward started the sixth with a line drive double off the wall. Kris Bryant hit a double down the third base line, scoring Heyward to bring the Cubs within one. Bryant moved to third on a sacrifice fly to center field by Rizzo. Stratton struck out Javier Baez with an 0-2 changeup to get the second out.

Kyle Schwarber came up with two outs and hit a fly ball to left-center field. Jarrod Dyson ranged over to make the catch, getting out of the inning with the Pirates in the lead.

Wieck stayed on for the Cubs, getting Adam Frazier to ground out to start the inning. Josh Bell followed with a double down the third base line, which sent the Cubs to the bullpen for Jeremy Jeffress. The Pirates went down in order.

Stratton put two runners on to start the seventh, bringing up pinch hitter Victor Caratini, who grounded into a 4-6-3 double play. With a runner at third and two outs, Ian Happ came on to pinch hit for Jeffress. Stratton got Happ to ground out back to the mound to end the inning.

Brandon Morrow came on in relief for the Cubs in the eighth. Jacob Stallings started off with a single. Colin Moran followed with a single through the right side of the infield, moving Stallings to third with no outs. Morrow was checked on by the trainer, and removed from the game after an apparent back issue.

The Cubs brought on right-handed pitcher Trevor Megill. The Pirates pinch-hit Kevin Kramer for Stratton. Kramer struck out. Jarrod Dyson followed with a 3-2 walk to load the bases with one out. Adam Frazier took the next pitch deep to center field, hitting a 422 foot grand slam to put the Pirates up 7-2. The home run had an exit velocity of 104.4 MPH.

Megill walked Gregory Polanco with two outs. Casey Sadler came on to pitch, and got Bryan Reynolds to ground out to end the half inning.

Dovydas Neverauskas came on in relief in the bottom of the eighth. Kris Bryant hit a one-out single. Anthony Rizzo reached on an infield single on a deep grounder to Kevin Newman at short. Neverauskas got Javier Baez swinging at a 98 MPH fastball for the second out. Kyle Schwarber grounded out to second to end the inning.

Sadler returned to the mound in the ninth for the Cubs and set the Pirates down in order. 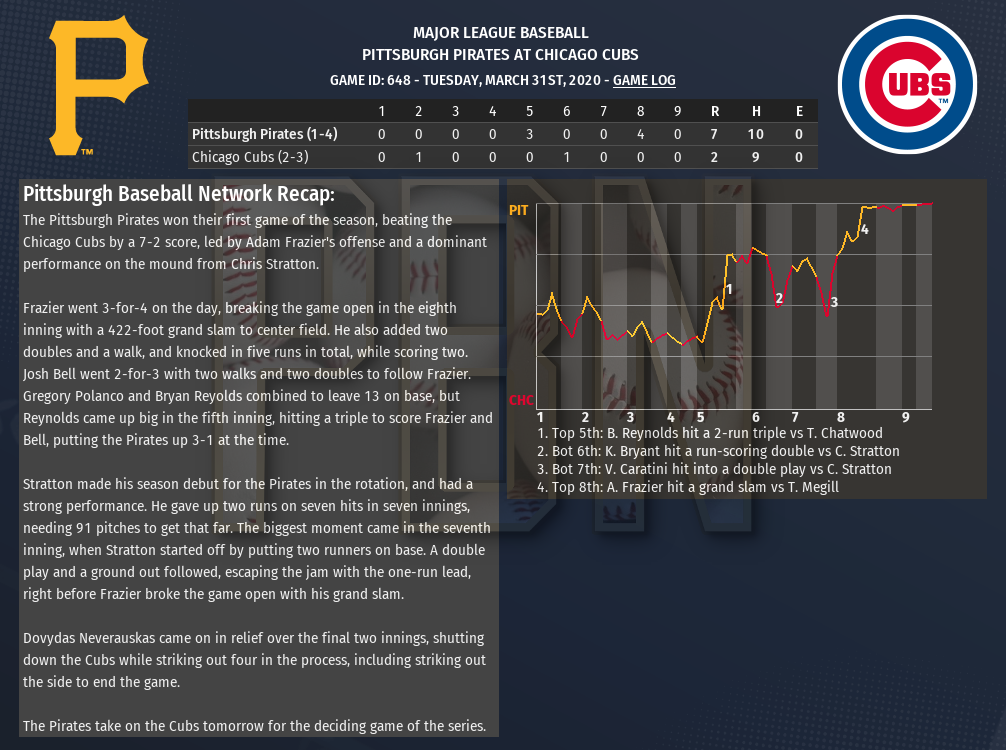 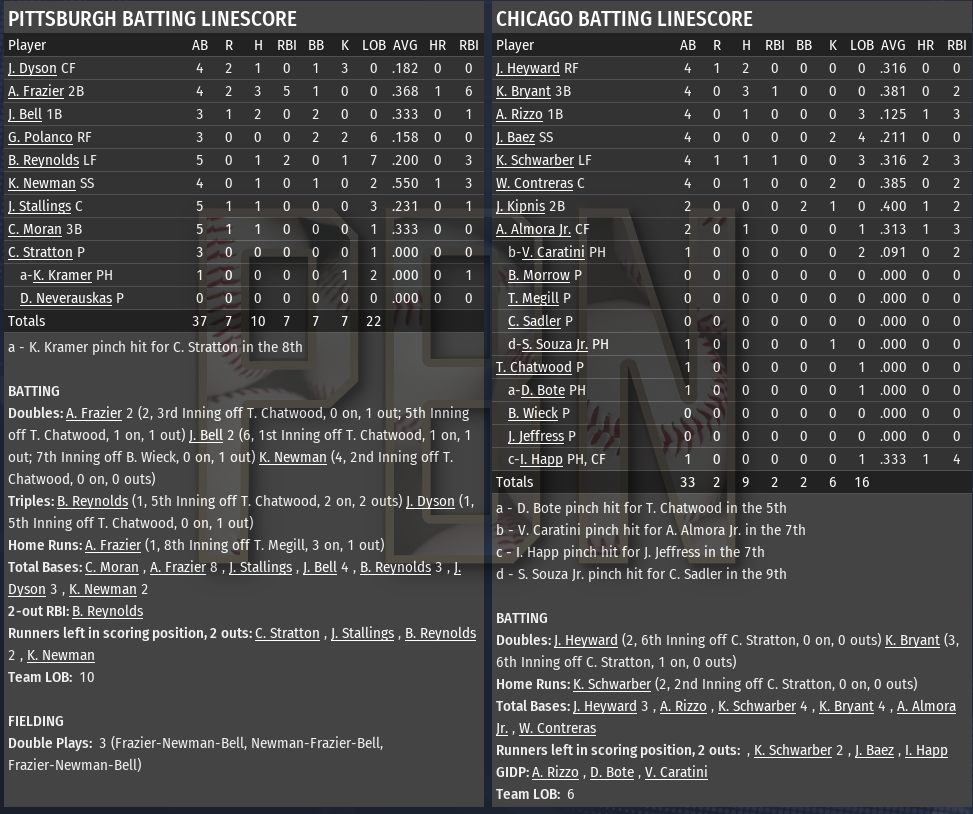 Rumor has it Ke’Bryan Hayes will be called up tomorrow… 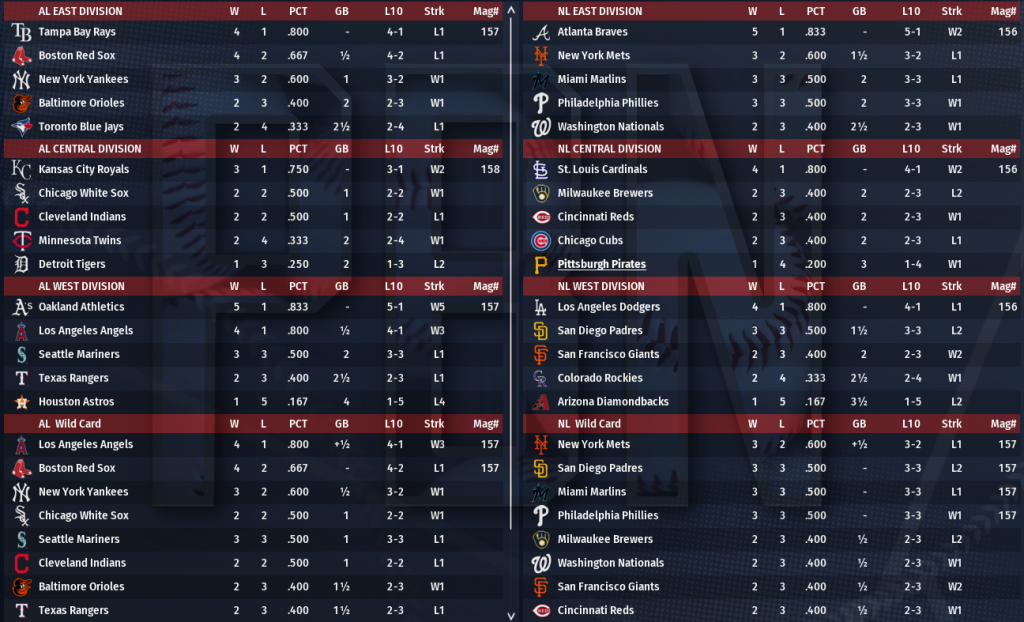