OOTP: Mitch Keller Makes His Season Debut as the Pirates Try to Avoid a Sweep Against the Rays

There might be no baseball this year, but every single day you can come to this site and see what the 2020 Pittsburgh Pirates did in our daily simulation.

We’re using Out of the Park Baseball 21 to simulate the games on the days they were supposed to happen. We have no control over the simulations, and I’ll be honest, it’s been fun waking up each morning, firing up OOTP, and watching the game unfold.

The Pirates started the season 0-2 against the Rays, losing 9-4 in the opener, and 7-3 yesterday. Mitch Keller makes his debut today, going up against Rays lefty Brendan McKay, as the Pirates try to avoid the sweep.

You can follow the game as it unfolds by following the inning summaries below, or you can skip to the end to see the box score results and the Pittsburgh Baseball Network summary.

Feel free to discuss the game in the comments! Remember, this is all supposed to be fun, which is something we all need right now.

Brendan McKay struck out the side, getting Jarrod Dyson, Adam Frazier, and Josh Bell in order.

Jose Martinez hit a one-out shot to right field. He beat the throw from Gregory Polanco and the tag from JT Riddle to stretch the hit into a double. Mitch Keller followed by walking Austin Meadows on a high and outside 3-1 pitch, bringing up Hunter Renfroe.

Hunter Renfroe hit a home run to left field, giving the Rays a 3-0 lead. Renfroe has homered in all three games against the Pirates to open the season, with four homers on the year.

Keller got out of the inning, adding a strikeout and a walk along the way.

McKay started the inning by striking out Gregory Polanco, setting down the first four batters of the game with strikeouts. Bryan Reynolds became the first Pirates hitter to put the ball in play, flying out to center field.

Kevin Newman went to a 3-2 count against McKay, and hit a one-hop double off the wall in deep center field, beating the throw at second from Kevin Kiermaier. Jacob Stallings followed by hitting a grounder to Willy Adames, who bobbled the ball, putting runners at first and third with two outs and JT Riddle at the plate.

McKay picked off Stallings at first base to end the half-inning.

Keller got Willy Adames to strike out on a high, 1-2 fastball. After a weak ground ball out back to the mound, he got Kiermaier looking at an 0-2 changeup to retire the side in order.

McKay struck out Riddle swinging on a 3-2 pitch for his fifth strikeout of the day. Erik Gonzalez grounded out to third. McKay added his sixth strikeout, getting Jarrod Dyson on a 1-2 fastball.

Jose Martinez hit another double off Keller to lead off the inning, this time going to left field. Keller struck out Austin Meadows looking at a 2-2 changeup for his fourth strikeout. He then struck out Hunter Renfroe with a 2-2 curveball. Keller got Nate Lowe to fly out to center to end the inning.

Adam Frazier led off the fourth with a single to center field. McKay struck out Josh Bell and Gregory Polanco in response. Reynolds hit a fly ball to left, which Meadows caught for the third out.

After inducing two ground outs to second, Keller gave up a double to Willy Adames. Keller got Kevan Smith to ground out to second for the third out.

McKay entered the inning with eight strikeouts over four innings, needing just 64 pitches in the process. He had allowed two hits, with Kevin Newman’s double in the second being the biggest hit of the day. That changed in the fifth, when Newman took the first pitch from McKay deep for a solo homer. The ball traveled 414 feet, with a 103.8 MPH exit velocity.

After Stallings grounded out, JT Riddle reached with a single on a line drive to center field. Erik Gonzalez lined out to first and Jarrod Dyson grounded back to the mound to end the frame.

Keller started the fifth inning by striking out Kiermaier on three pitches, getting him swinging on a 95 MPH fastball. Keller struck out Jose Martinez swinging with another 95 MPH fastball up in the zone. Austin Meadows followed with a deep shot to center field on a 1-1 count, but Jarrod Dyson was able to reel it in at the warning track for the third out.

McKay struck out Adam Frazier to start the sixth, getting his ninth strikeout of the game. Josh Bell got on base, hitting a one-out double to center field. Bell then moved to third base when McKay threw a pitch inside and past the catcher. That made the count 2-0, and Gregory Polanco worked a walk three pitches later.

With runners at the corners and one out, McKay struck out Bryan Reynolds on an 0-2 pitch for his tenth strikeout of the game. Kevin Newman continued to have McKay’s number, hitting an RBI single on a flare to left, bringing in Bell to make the score 3-2. Stallings grounded out to end the inning.

Keller started the bottom of the sixth inning by giving up a first pitch home run to Renfroe, who took an 83 MPH changeup 426 feet. Keller got the next three batters on a deep fly out, a ground out, and a pop out to end the inning.

McKay’s day is over, with left-hander Jose Alvarado coming on in relief. Erik Gonzalez hit a one-out single, and Dyson followed with a walk on a 3-2 pitch, with Gonzalez running on the throw. The Rays went to right-handed pitcher Oliver Drake. He got Frazier to fly out to Meadows for the second out, and Bell to ground out to short to end the inning.

Keller entered the bottom of the seventh at 86 pitches, with seven strikeouts, two walks, and all of his damage coming from Hunter Renfroe home runs. He got Willy Adames to ground out on the first pitch, and struck Kevan Smith out for his eighth of the game. Kiermaier followed with a grounder that made it through the infield.

Richard Rodriguez came on in relief of Keller, getting Jose Martinez to fly out to right to end the inning.

Oliver Drake struck out Polanco and got Reynolds to fly out to start the inning. Kevin Newman continued to rake, reaching on a line drive single to center field on a 2-2 curveball. Diego Castillo came on in relief and struck out Stallings for the third out.

Austin Meadows started the bottom half of the inning with a single to center off Rodriguez. He stole second base on an 0-1 pitch to Renfroe, which was taken for a strike. Rodriguez then strikes out Renfroe swinging, but he’s awarded first base on catcher interference.

Rodriguez got Nate Lowe to ground into a 1-6-3 double play back to the mound, allowing Meadows to take third. Yandy Diaz followed with a line drive down the right field line, bringing Meadows in with a single. Brandon Lowe followed with a double, bringing Diaz all the way around for another run.

After an intentional walk, Rodriguez got a ground out to Bell to end the inning.

JT Riddle grounded out to short. Hunter Renfroe robbed Erik Gonzalez of a hit on a sliding catch in right-center field. Dyson flew out to Meadows in left to end the game. 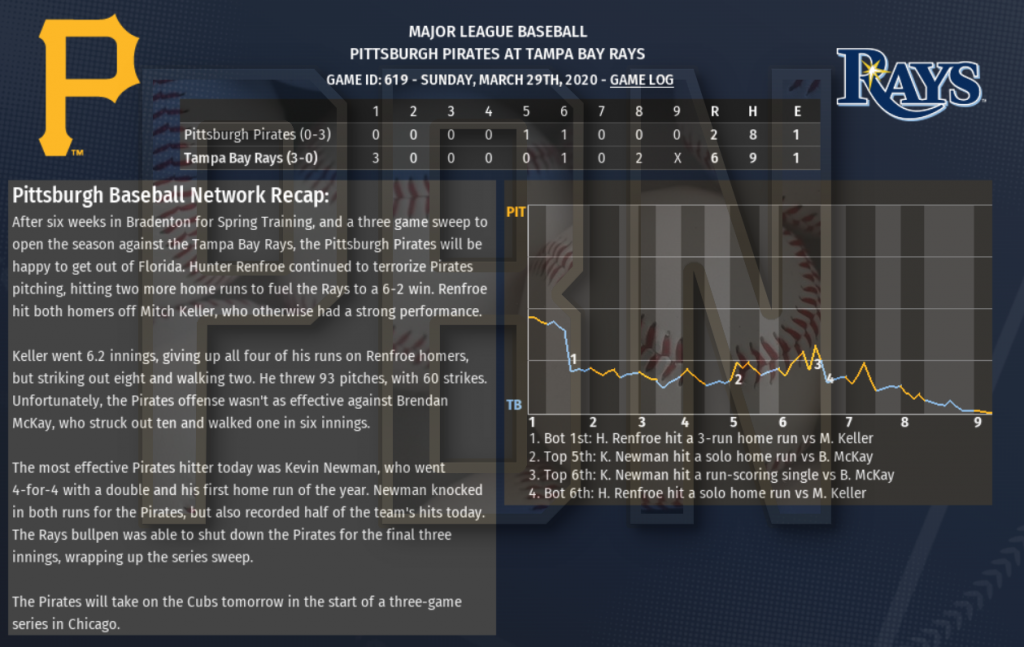 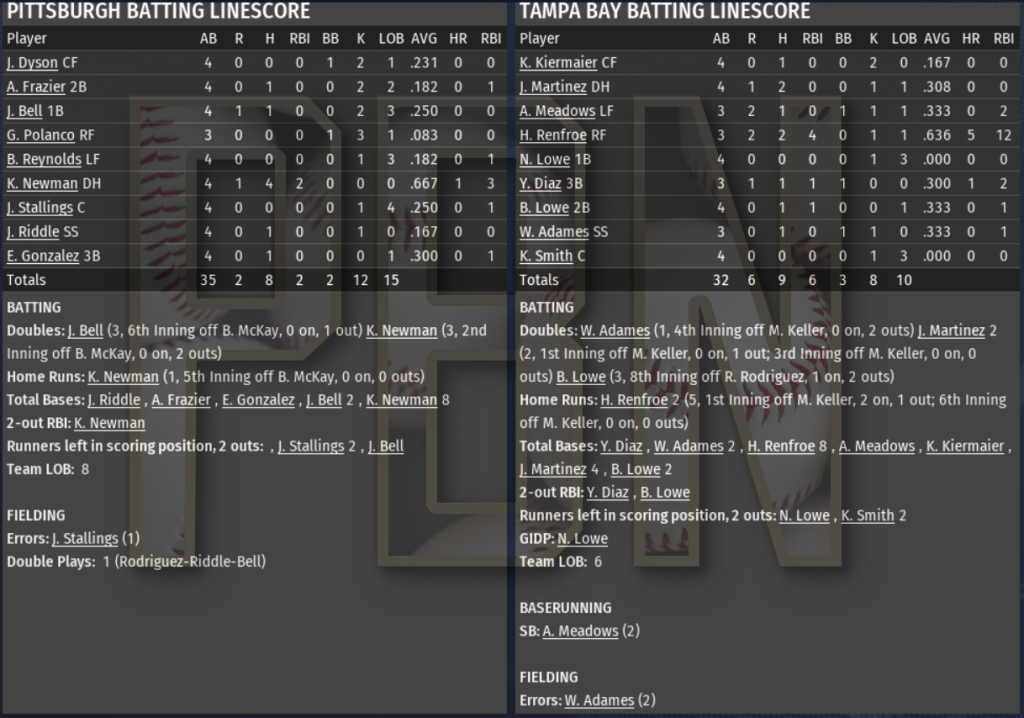 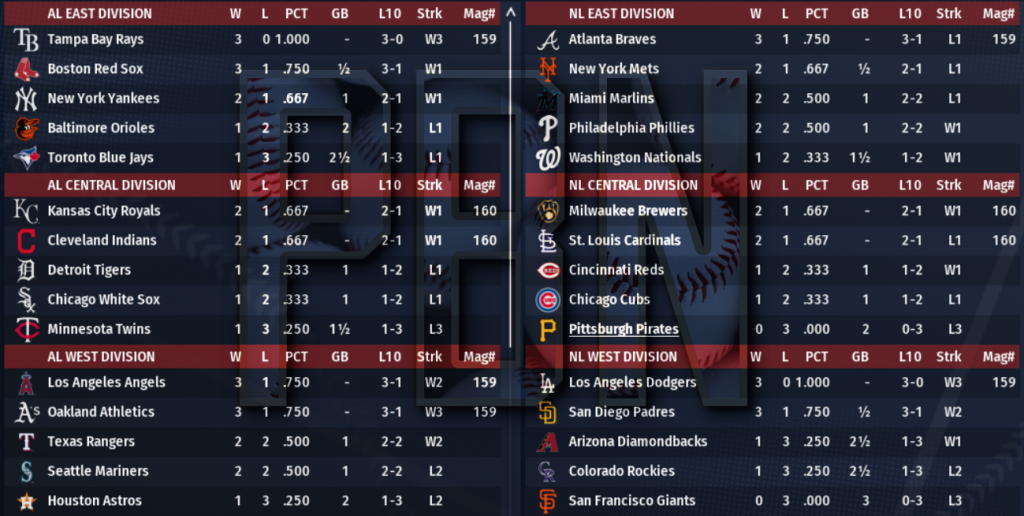 The first game of the series will be posted tomorrow at 4:10 PM EST.