OOTP: Pirates Take on Tyler Glasnow and the Rays in Second Game of the Season

The 2020 season resumes today, with the Pirates taking on the Rays.

The Rays took the first game of the season, winning 9-4.

Full results are below, with the inning details first if you want to follow it like a real game.

Tyler Glasnow put the Pirates down in order, finishing off by striking out Josh Bell swinging.

Kevin Kiermaier led off with a walk against Joe Musgrove, then stole second base. He scored when Austin Meadows hit a triple off the wall in center field. Meadows scored one batter later on a Hunter Renfroe RBI double to right. Musgrove retired the next two batters to escape the inning.

Glasnow started the inning by striking out Polanco on a 3-2 fastball high in the zone. The only batter who reached in the inning was Kevin Newman, who reached on a error by second baseman Brandon Lowe. Bryan Reynolds was robbed of a hit by a leaping catch in center field from Kiermaier.

Musgrove struck out two batters, but also walked two. He put Willy Adames and Kevin Kiermaier on with walks, and got out of the jam by getting Jose Martinez to ground out on a slow roller to Musgrove on the first base side of the mound.

Erik Gonzalez led off the inning with a single. He moved to third when Jarrod Dyson hit a one-out single through the right side of the infield. Gonzalez scored the first run for the Pirates on an Adam Frazier sacrifice fly to center field. Dyson stole second base with two outs and Josh Bell at the plate. Bell popped out to end the inning.

Austin Meadows started the inning with a single, and moved to second with a one-out stolen base. Meadows got to third on an error by Musgrove, when he dropped the throw from Josh Bell at first base. Musgrove got Yandy Diaz to ground into a 6-4-3 double play, started off by JT Riddle, who is playing short today.

Kevin Newman reached with a two-out double, and moved to third on a wild pitch. Glasnow got Riddle to fly out to center field to escape the inning.

Mike Zunino reached on a two-out single, but Musgrove got out of the inning. Musgrove ends the inning with 72 pitches, while Glasnow is at 62.

Jarrod Dyson reached on a two-out error by Willy Adames, but Glasnow escaped the inning with no further damage.

Meadows reached again, this time on a one-out error from JT Riddle. Hunter Renfroe hit his second homer of the season, extending the Rays lead to 4-1. Musgrove gave up a two-out single, but didn’t allow any other damage.

Glasnow gave up a single to Bryan Reynolds in an otherwise clean inning. He struck out Polanco for his third strikeout of the game. Glasnow finished the inning at 91 pitches.

Glasnow is replaced by left-handed pitcher Jose Alvarado, who gave up a walk to Erik Gonzalez, but erased that with an inning-ending double play.

Kyle Crick replaced Musgrove, and got into trouble early. He started by giving up a single to Jose Martinez, followed by a walk to Meadows. Hunter Renfroe followed with another home run, extending the lead to 7-1.

Blake Weiman replaced Crick, still with no outs in the inning. Weiman gave up a single to Brandon Lowe, and a two-out single to Willy Adames. Jarrod Dyson came up big by throwing Lowe out trying to go from first to third on the pitch, getting Weiman out of the inning.

Alvarado started the inning by walking Dyson. He was replaced by Chad Roe, who started off by walking Adam Frazier. Josh Bell took a 3-2 slider for a ball to load the bases with another walk. Gregory Polanco grounded into a double play, scoring Dyson and putting Frazier on third with two outs.

Tampa brought on left-hander Colin Poche, their third pitcher of the inning, to face Reynolds, who hit an RBI single down the left field line. Poche got Newman to ground out to end the inning.

Weiman retired the side in order in the bottom half of the inning.

Poche retired the first two batters of the inning, getting Erik Gonzalez with a strikeout. Tampa brought on Diego Castillo in relief, who allowed a single to Luke Maile, but got Dyson to ground out to first to end the game. 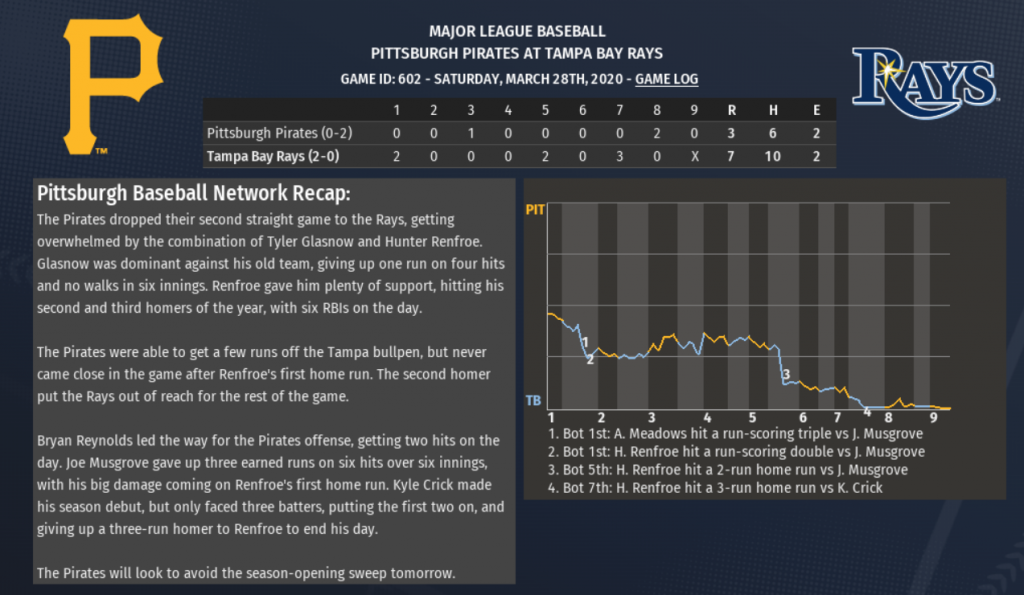 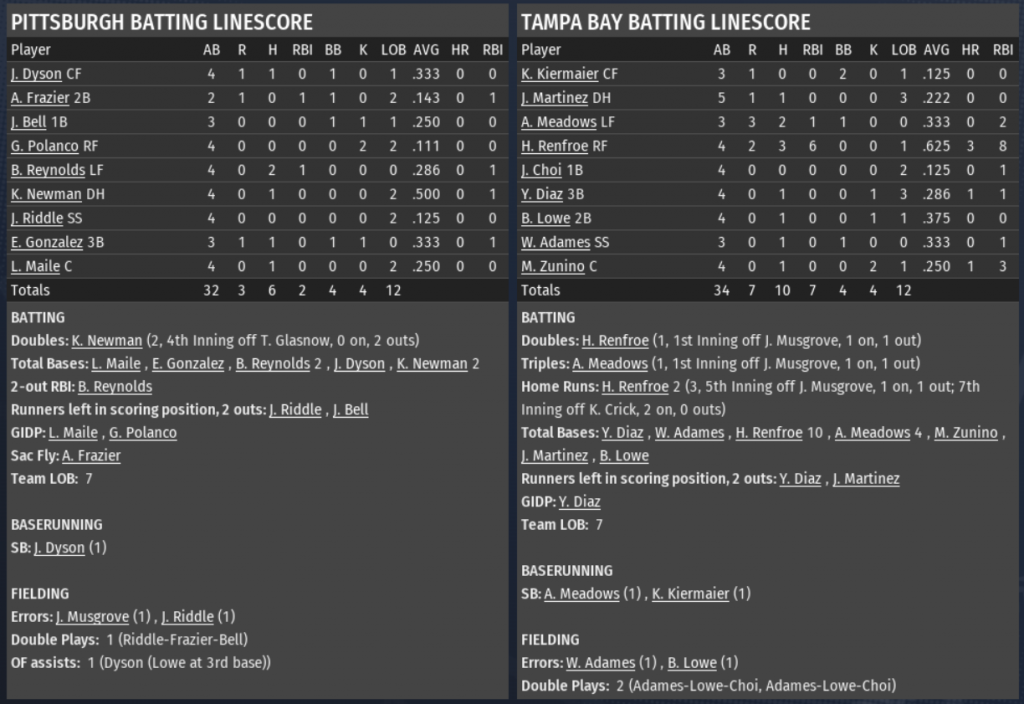 The Pirates have Jarrod Dyson, Chris Archer, Richard Rodriguez, and Jacob Stallings on the trading block, as of 3/25. 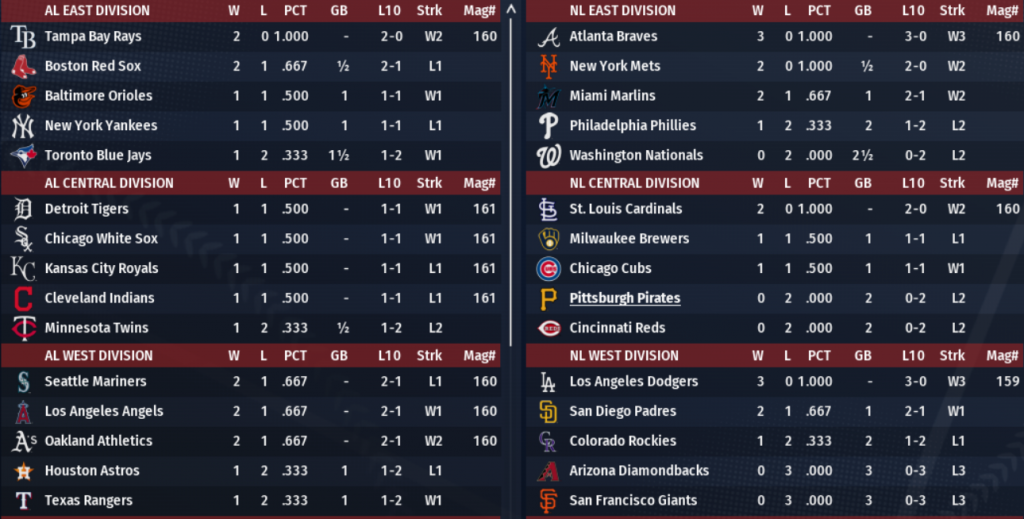 The Pirates wrap up their opening series against the Rays tomorrow at 1:10 PM EST. Mitch Keller will make his season debut, going up against left-handed pitcher Brendan McKay.