We’re going to be following the 2020 Pittsburgh Pirates season all year, as if it were happening live, using Out of the Park Baseball 21 (thanks for OOTP for setting me up with a copy for the season.)

Each day we will have game results and a team update, posted at the scheduled game time.

Rather than just giving you the results, I wanted to add a bit of drama to it by listing the events by inning. If you wish to read along and follow the game, you can do it that way. Otherwise, feel free to skip to the end, where we’ve got some cool charts, box scores, and other notes.

Enjoy, and feel free to leave any thoughts or suggestions (or game discussion) below.

Josh Bell hit a two-out double, but Gregory Polanco flied out to the wall to end the inning.

Kevin Keirmaier led off the inning for the Rays with a double, then scored two batters later on a sac fly by Austin Meadows.

Bryan Reynolds drew a leadoff walk, then moved to second base on a passed ball when Mike Zunino couldn’t handle a low splitter. Kevin Newman brought him in with an RBI single, tying the score.

With two outs, Erik Gonzalez drew a walk, putting runners on first and second. Jarrod Dyson reached on a slow infield hit to load the bases.

The trainer came out to examine Charlie Morton’s back, and he was removed from the game. Chaz Roe came on to pitch, getting Adam Frazier to ground out to second to end the inning.

The Pirates went down in order in the top of the third. Chris Archer started to hit his stride in the bottom half of the inning, getting two strikeouts. He got Mike Zunino to fly out to left, then struck out Kiermaier looking, and Jose Martinez looking, both on 2-2 pitches.

The Pirates took the lead in the top half of the inning when Jacob Stallings scored Kevin Newman on a ground ball single to right field. Newman reached on a shallow single to center, then moved to second base on a JT Riddle bunt.

The Rays didn’t take long to reclaim the lead. Austin Meadows drew a leadoff walk in the fourth. Hunter Renfroe followed him by hitting a two run homer, launching the 2-1 pitch 397 feet to give the Rays a 3-2 lead.

Archer bounced back with a strikeout and a fly out to center. He gave up a double to Brandon Lowe, who scored on a Willy Adames single to extend the lead.

Josh Bell got on with a stand-up double with one out in the fifth. The Pirates couldn’t do anything, as Gregory Polanco followed up with a strikeout, and Bryan Reynolds flew out to center.

The Rays added another run in the bottom half of the inning. Jose Martinez reached on a one-out single, then moved to second on a single by Renfroe. Ji-Man Choi singled to make the score 5-2.

That ended Archer’s day and brought on Blake Weiman in relief, who ended the inning with a ground out to third.

Kevin Newman led off the sixth with a double. Andrew Kittredge came on to pitch for the Rays, getting two straight fly outs from Riddle and Stallings.

Erik Gonzalez added a run with a double, bringing the Pirates to within two. The Pirates came close to adding another run when Jarrod Dyson hit a grounder up the middle. Willy Adames robbed him with a long-ranging play, beating Dyson by half a step to end the inning.

The bottom half of the sixth was rough for Blake Weiman. He started by allowing a double to Brandon Lowe, followed by an intentional walk to Adames. Mike Zunino followed with a three run homer on an 0-2 pitch, putting the Rays up 8-3.

Dovydas Neverauskas came on to pitch, getting two strikeouts on his way to ending the inning.

The Pirates challenged slightly in the seventh. Adam Frazier led off with a single. Oliver Drake came on to pitch to Bryan Reynolds with two outs. Reynolds walked, putting two on. Kevin Newman followed with a ground out on the first pitch to end the inning.

Yandy Diaz led off the bottom half of the inning with a solo homer, launching the 3-1 pitch 410 feet to give the Rays a 9-3 lead. Neverauskas responded with three straight strikeouts.

JT Riddle started the inning with a single, and moved to third on a follow-up single from Jacob Stallings. Erik Gonzalez grounded into a 5-4-3 double play, which scored Riddle, but broke up the momentum.

Jarrod Dyson tried to pick things up with a two out single. Adam Frazier hit a 104.4 MPH line drive to center field, but was robbed by Kiermaier on a diving catch to end the inning.

Edgar Santana came on to pitch the eighth, getting a clean inning with a strikeout of Austin Meadows.

Josh Bell started the frame by striking out on three pitches. Left-handed reliever Colin Poche came on to pitch for some reason.

Gregory Polanco hit a double off the wall, giving the Pirates a spark.

Bryan Reynolds followed up by striking out swinging on a 1-2 pitch.

JT Riddle ended the game on a weak grounder back to the mound on an 0-1 pitch. 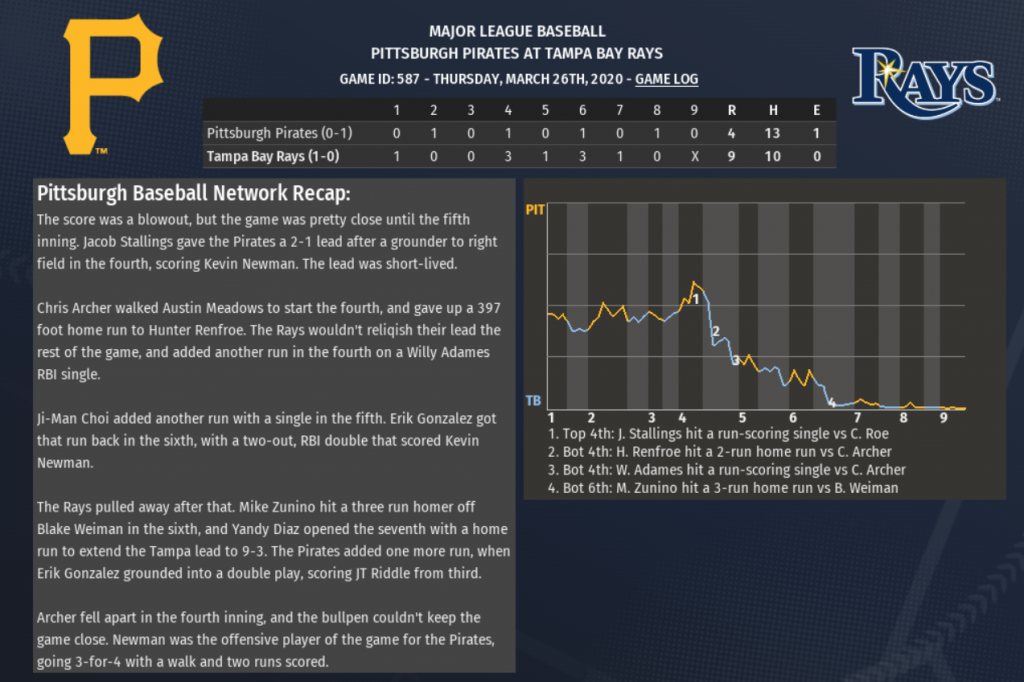 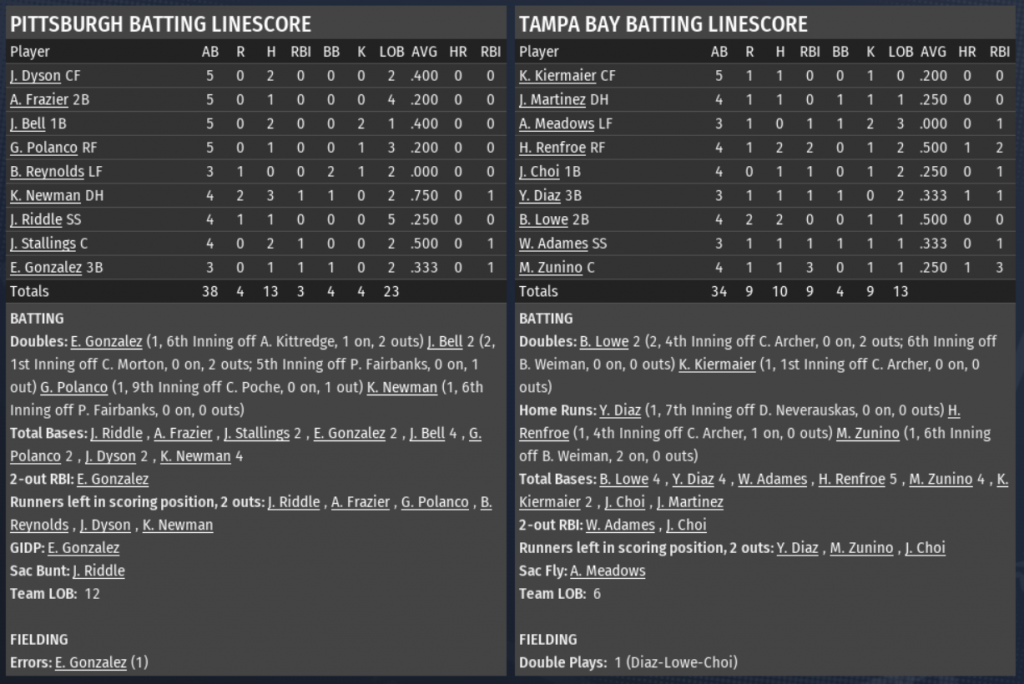 I’ll have any team-related news and notes in this section each day. There’s nothing today, so I’m letting you know that we’ll also have prospect updates when the minor league season begins next week.

The Pirates are off tomorrow. They return on Saturday at 3:10 PM EST as RHP Joe Musgrove takes the mound for the Pirates against RHP Tyler Glasnow.

This is only one of three seasons we’ll be recapping daily on the site this year. Check back tomorrow for the second season we’re covering.